82% of Credit Cardholders Say More Laws, Regulations Needed to Protect Them; Up from 2019

A growing percentage of credit cardholders — including large majorities among Republicans, Democrats and independents alike — say the government needs to do more to protect them, according to a new LendingTree survey.

More than 8 in 10 (82%) credit cardholders at least somewhat agree there should be more laws and regulations to protect them. That’s a 5-point increase from 2019, the last time we surveyed cardholders on the topic.

The survey also shows widespread approval for a credit card rate cap, a maximum interest rate that issuers could charge. There’s a cap on the interest rates that can be charged on credit cards issued by federal credit unions, but there’s no maximum rate on other types of credit cards. However, the survey shows clear support for a rate cap, even if it means reducing rewards or access to credit.

To be clear, there’s virtually no chance of a rate cap anytime soon, despite this survey of 1,260 credit cardholders showing it’s something that most Americans support. However, other credit card regulations may be on the way, as the White House announced in late September its intent to crack down on “junk fees” across many industries, including credit card late fees.

In today’s hyperpolarized America, there are very few things that we as a country seem to agree on. One of them, however, appears to be the need for more credit card regulation.

We asked whether cardholders agreed with the following statement: “There should be more laws and/or regulations in place to protect credit cardholders.”

No matter the gender, age, income level or political party affiliation, a significant majority of Americans say they agree.

Perhaps not surprisingly, Democrats are the most likely to favor increased regulation, with 88% saying so. However, independents (79%) and Republicans (77%) are also heavily likely to support it.

Just 4% of cardholders say they disagree, while 14% say they neither agree nor disagree. That means Americans are more than 20 times more likely to agree with the statement than to disagree.

Cardholders are also united in their support of a credit card rate cap. Eight in 10 cardholders say there should be a maximum interest rate that issuers can charge credit cardholders, while just 9% disagree and 10% don’t know. 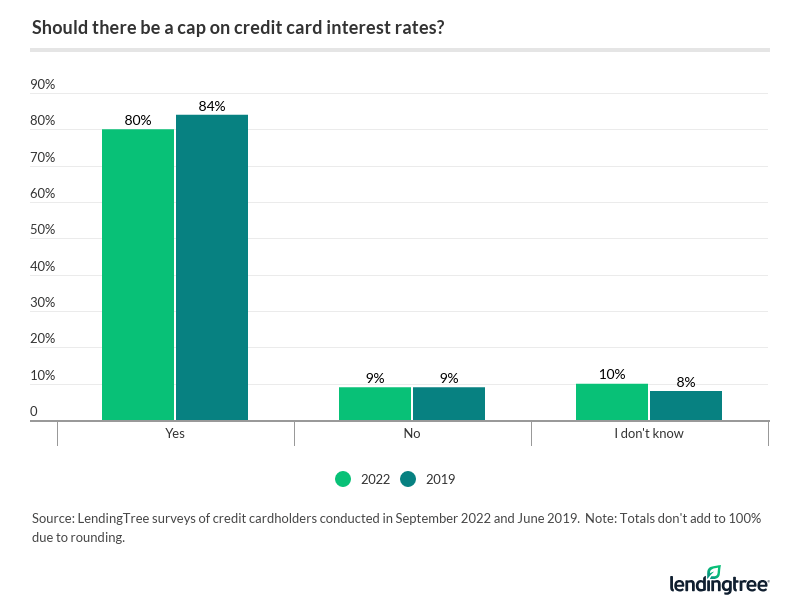 Today, there is a rate cap on credit cards issued by federal credit unions — they can’t charge more than 18% — but there isn’t one for other types of cards. Thanks to the landmark Credit Card Accountability Responsibility and Disclosure (CARD) Act of 2009, there are restrictions on when card issuers can raise cardholders’ interest rates, but that legislation didn’t include implementing a maximum interest rate for credit cards.

In 2019, U.S. Sen. Bernie Sanders (I-Vt.) and U.S. Rep. Alexandria Ocasio-Cortez (D-N.Y.) proposed legislation that capped credit card interest rates at 15%. Ultimately, nothing came of it — as has been the case with other such proposals — but the legislation was popular with cardholders. In the 2019 LendingTree survey mentioned earlier, 53% of cardholders said they supported the proposal, while another 26% said they supported rate caps but thought the cap should be lower than 15%. Just 14% opposed it.

Cardholders today express support in large numbers when asked about rate caps in general instead of specific legislation. However, overall support for a rate cap dipped slightly — from 84% in 2019 to 80% today — while those opposed remained unchanged at 9%. That may be surprising, given that credit card interest rates are higher today than in 2019, but support remains high.

Rate cap remains popular even if it means fewer rewards

It’s easy to see why a rate cap is popular. No one likes paying interest. However, implementing a rate cap would likely have a profound impact on the industry and credit cardholders alike beyond reducing interest payments.

Most important, it would likely lead to reduced access to credit for those with imperfect credit. Banks charge interest to reduce risk if cardholders don’t pay what they owe. The greater the risk, the higher the interest rate charged. That’s why folks with low credit scores are typically charged the highest interest rates, sometimes 25% or higher. If banks could no longer charge the interest rate they choose, many would choose to no longer lend to riskier borrowers, leaving those folks to pricier options like payday loans.

A rate cap would also likely lead to fewer and less lucrative reward offerings because banks would feel they could no longer afford them. We saw something similar in 2010 when the Durbin amendment — part of the Dodd-Frank Wall Street Reform and Consumer Protection Act that was passed during the Great Recession — substantially reduced the amount of fees card companies could charge merchants for accepting debit cards. Those fees often helped fund debit card rewards, and once the fees shrunk, debit card rewards largely vanished. A rate cap could lead to a similar shake-up in the credit card space.

When asked to consider these two scenarios, support for a rate cap falls significantly, though cardholders are still about two times more likely to support a cap than to oppose one.

Compared to 2019, we saw a significant increase in the percentage of cardholders who backed a rate cap if it meant losing rewards and a slight decrease in those supporting it if it meant reduced credit access. 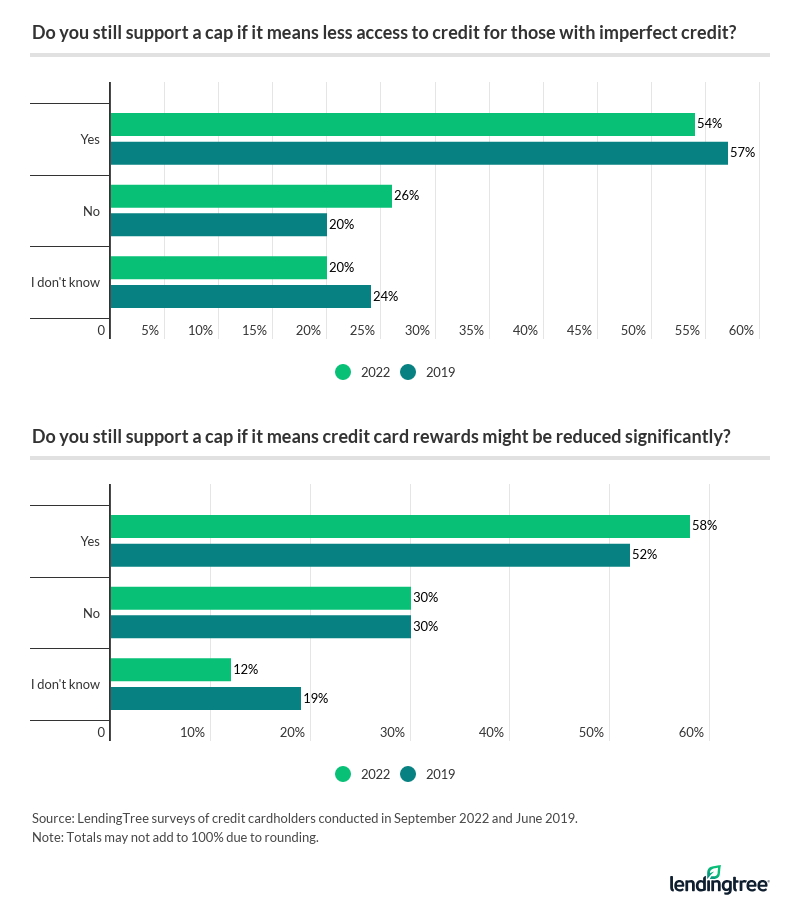 Fixed-rate credit cards would be a popular option

The vast majority of credit cards in America today are variable-rate cards. For most of those cards, that means when the Federal Reserve raises or lowers rates, the rates on those cards will go up or down by the same amount, usually within a billing cycle or two. And unlike most other fee and rate changes to your credit card, the issuer doesn’t have to give you advance notice that your rate will change. They just do it. Americans have likely learned that the hard way several times in 2022, as the Fed has raised rates five times this year alone.

Fixed-rate cards do exist, though they’re rare. Many of the few that exist are marketed toward those with thin or imperfect credit and feature higher-than-average APRs. However, our survey shows that cardholders wish fixed-rate cards were less rare. 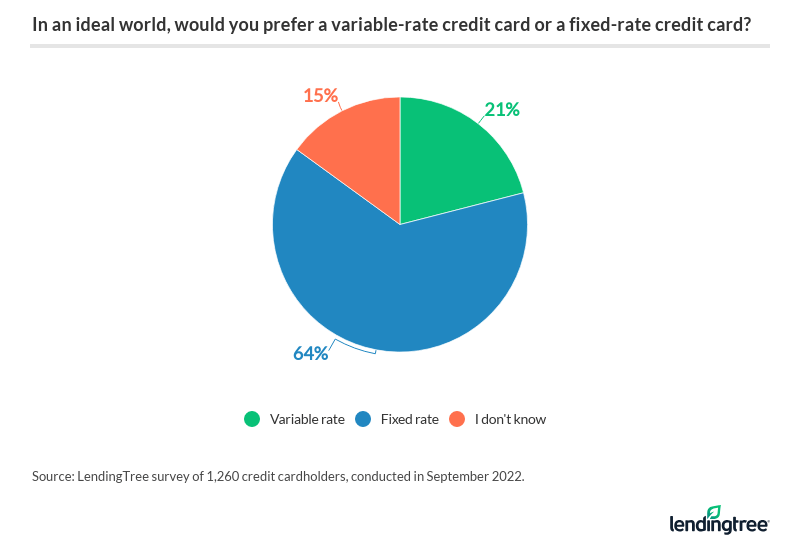 That preference shouldn’t be surprising, given how quickly interest rates have risen in recent months. However, fixed-rate cards aren’t without major issues. Here are two important things to remember about fixed-rate credit cards:

Despite the public’s apparent appetite for these cards, don’t expect a torrent of fixed-rate cards to hit the market soon. While we may see more of them as rates continue to rise, fixed-rate cards will almost certainly remain the exception rather than the rule for the foreseeable future.

The bottom line: Some changes may be ahead, but not a rate cap

It’s rare for 80% of Americans to agree on much of anything these days. However, credit cardholders are united in their support of extra regulation of the credit card business, and that appears to be what is coming from the White House in the near future.

LendingTree commissioned Qualtrics to conduct an online survey of 1,577 U.S. consumers — 1,260 of whom are credit cardholders — ages 18 to 76 from Sept. 23 to 24, 2022. The survey was administered using a nonprobability-based sample, and quotas were used to ensure the sample base represented the overall population. All responses were reviewed by researchers for quality control.

About Half of Cardholders Back a Credit Card Rate Cap, Even If It Means Reduced Access to Credit and Rewards

About half of American cardholders (53%) said they support Sen. Sanders and Rep. Ocasio-Cortez’s proposal to cap rates at 15%.

The average credit card interest rate in America today is 22.21% — the highest since LendingTree began tracking rates monthly in 2019.