Nearly 70% of Americans Say They’re Dining Out Less Frequently Due to Inflation, and Almost a Third Are Tipping Less

Most Americans are feeling the severe effects of inflation, and the restaurant and grocery industries are experiencing residual impacts.

A new LendingTree survey of nearly 1,600 Americans shows that consumers are changing their dining and tipping habits, with 67% saying they’re dining out less and 31% tipping less when they are dining out. Plus, about two-thirds of consumers have worried in the past month about affording groceries.

For more insight into habits amid inflation, keep reading.

The biggest shift in habits is that 67% of Americans are dining out less because of inflation, which impacts what consumers pay — and what restaurants change.

“Dining out is something that we sorely missed in the darkest days of the pandemic, but — ultimately — it’s a luxury,” says Matt Schulz, LendingTree chief credit analyst. “That means that when money gets tighter than usual at home, like it has recently with inflation, dining out may be one of the first costs on the chopping block.”

The following graphic covers how consumers have changed their dining behaviors due to inflation. 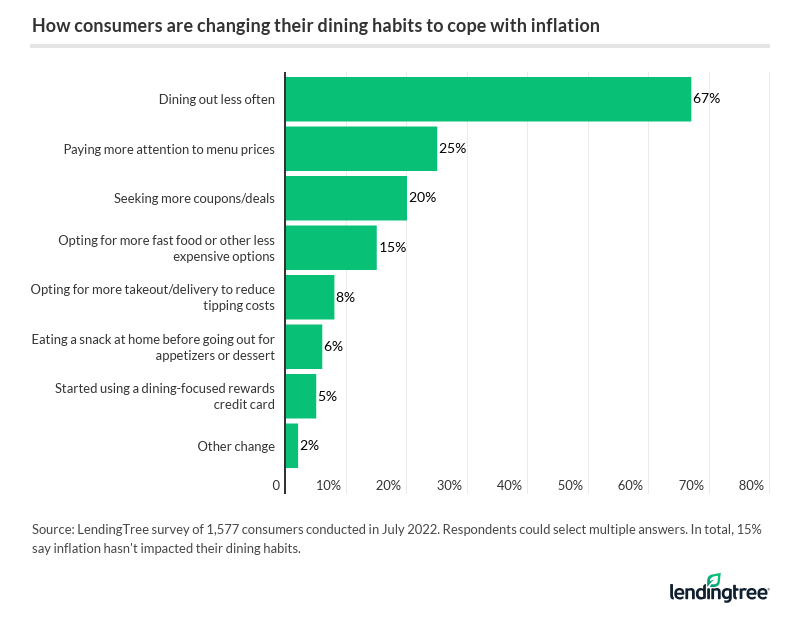 Gen Xers top the list of demographics dining out less frequently (73%), followed by parents whose children are all 18 or older (72%). Interestingly, consumers who make $100,000 or more a year are most likely to pay more attention to menu prices (32%).

Menu prices can impact how much Americans tip when dining out. The survey data backs this as 31% of people say they’re tipping less than normal. This is led by people with young children (38%) and millennials (ages 26 to 41) (36%). Meanwhile, baby boomers (ages 57 to 76) are least likely to say they’re tipping less at 23%. Separately, 14% aren’t tipping for takeout or delivery, opting to leave gratuity only for dine-in service.

Schulz says these changes are understandable but unfortunate.

“The truth is that if you can’t afford to give an appropriate tip when you’re dining out or ordering in, you may need to think about whether you should be doing those things at all,” Schulz says. “That extra couple of bucks on a tip probably won’t mean much to you, but it’s a big deal to those who depend on tips for a living.”

Consumers’ food habits are changing across the board, including at grocery stores. Most consumers (85%) say inflation has impacted their grocery shopping behavior.

Similar to changing restaurant habits, we explored where people are making alterations with groceries. Nearly half of consumers (47%) are buying more generic brands, while 43% are sticking to their list and only buying what they need. 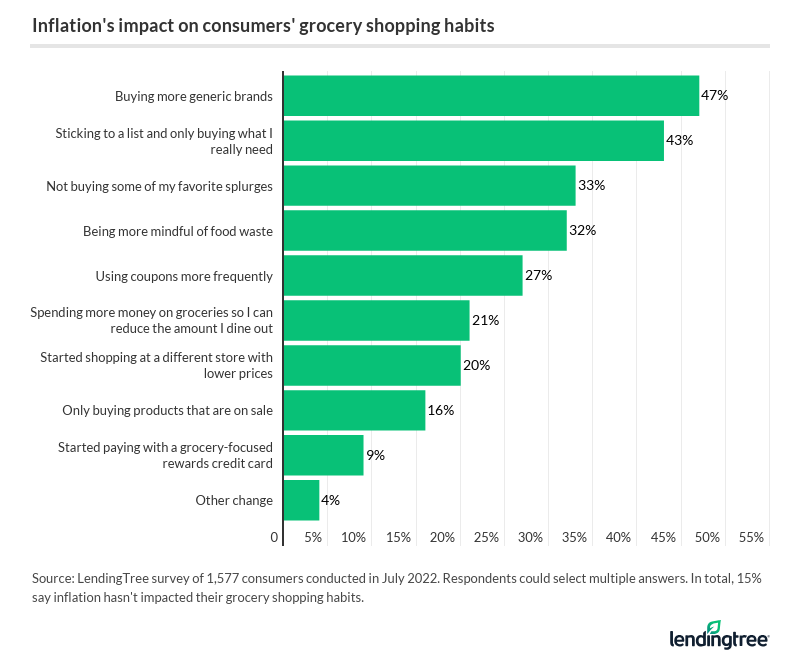 “It’s great that people are taking steps to deal with rising costs,” Schulz says. “Simple things like buying generic brands, sticking to a list and reducing food waste are all excellent steps to take, even in excellent economic times. But they become even more important when times are tougher and prices are higher.”

Parents with children younger than 18 lead the way among people buying generic brands (54%), followed by Americans who make $35,000 to $49,999 annually (52%). Meanwhile, baby boomers have cut back the most on their favorite splurges and are most mindful of food waste and reuse. Parents with young children are turning to stores with lower prices the most.

“It can be hard with grocery stores because many of us get very attached to our regular store — but tough times require tough choices, and it’s entirely possible that the store down the road might have better prices,” Schulz says, “You’re doing yourself and your budget a disservice if you don’t at least check.”

A lower household income can also lead to more financial concerns during difficult economic times. Households making less than $35,000 a year are most anxious about affording groceries at 74%. That percentage plummets to 51% among six-figure earners.

Another group greatly feeling the impact of inflation on food is parents with extra mouths to feed in their household. Households with children younger than 18 are especially impacted by rising prices, with 73% saying they were worried about their ability to afford groceries in the past month. 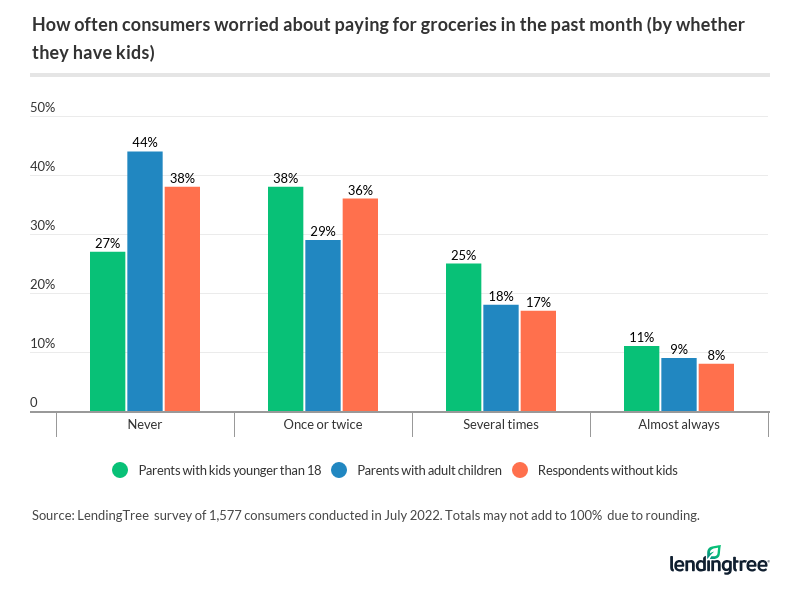 “Having young kids is expensive, even in the best of times,” Schulz says. “Mix in rampant inflation and it gets that much worse.”

Programs for children, like free breakfast or lunch at school, may be available to parents, depending on their situation and location.

Still, parents are making strategic changes to their grocery shopping routines these days. Those with children younger than 18 are turning to generic brands (54%), couponing more frequently (33%) and switching to stores with lower prices (24%) to save money on groceries and stretch their budgets.

One way to help regain a bit of cash after making pricey grocery store and restaurant purchases is to take advantage of cash back rewards. Many lucrative cash back rewards cards that cater to restaurants and grocery stores exist, but a lot of consumers aren’t taking advantage of them. Nearly 80% don’t primarily pay with a credit card when paying for groceries or dining out. 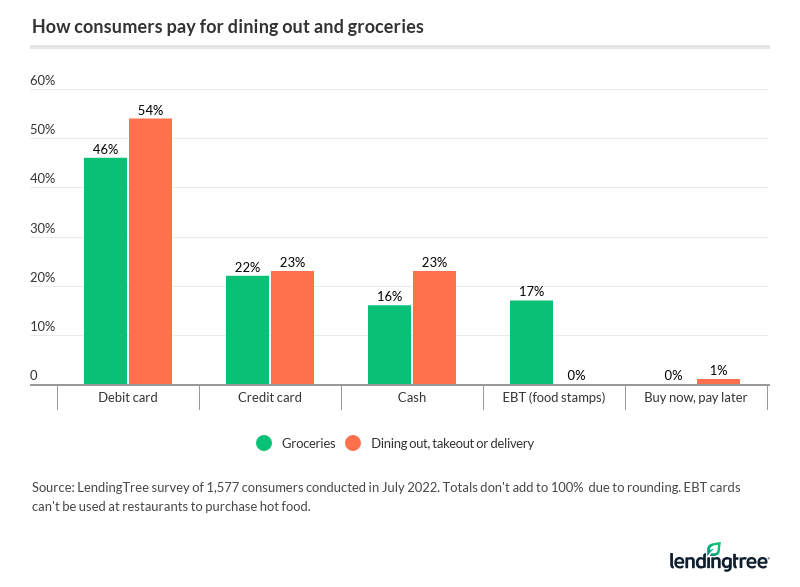 “I understand why people might shy away from buying groceries with a credit card, but it really can be a missed opportunity,” Schulz says. “Used wisely, the right credit card can save you real money and help to extend your food budget.”

However, he notes that it’s crucial you don’t see the card as an excuse to splurge and spend more, as overspending with the card will only make things worse. But if you can pay off the card regularly while also earning some cash back or points, it can make a difference.

Unsurprisingly, consumers who are a bit more established in life are those most likely to use a credit card for these purchases (namely baby boomers and six-figure earners).

5 ways to save money on food during record inflation

Consumers looking to save on food spending while battling high inflation rates may want to consider one of Schulz’s tips for saving big.

LendingTree commissioned Qualtrics to conduct an online survey of 1,577 U.S. consumers ages 18 to 76 from July 26-29, 2022. The survey was administered using a nonprobability-based sample, and quotas were used to ensure the sample base represented the overall population. All responses were reviewed by researchers for quality control.

As Food Spending Increases Across the U.S., More Americans Report They Don’t Have Enough to Eat

The American Express® Gold Card is the best dining credit card because it offers generous rewards at restaurants worldwide along with valuable dining credits.

READ MORE
Americans Will Spend $208 On Their Significant Other This Valentine’s Day, Up 44%

American lovebirds expect to spend 44% more than last year and nearly 4 in 10 are planning a romantic restaurant date, according to a new LendingTree survey.