13% of Millennials are Debt-Free, Credit Card Debt Most Common Problem

When the words “debt” and “millennial” are written in the same sentence, it usually has to do with the nation’s trillion-dollar student loan debt crisis. But a recent LendingTree survey found that student loan debt isn’t the most common debt weighing down millennials: It’s credit card debt.

Sixty-seven percent of millennials report having credit card debt, while just 36% of millennials say they have student loan debt, according to the survey.

The survey also found that these cardholders are not feel very optimistic about their ability to pay the debt off. Almost 25% expect to never be debt-free. Some millennials who do plan to pay off debt aren’t planning to do so any time soon.

Millennials who took on their oldest existing debt at 24 years old expect to be debt free at 49. Borrowing for an extended period of time like this means contending with accruing interest over decades. It’s difficult to predict the total long-term cost of borrowing money with a credit card because interest rates are typically variable.

The average interest rate for credit cards is currently sitting around 17%, although APRs for new credit card offers range from 15% to 24% or even higher. Sen. Bernie Sanders (D-Vt.) and Rep. Alexandria Ocasio-Cortez (D-N.Y.) have proposed capping credit card interest rates at 15% nationwide, but the chances of this passing is a far off possibility.

While student loans may not be the most common form of debt plaguing millennials, they still play a role in the debt struggle for many. Juggling payments for student loans and credit cards, plus perhaps a mortgage or auto loan, can make paying off debt feel insurmountable. 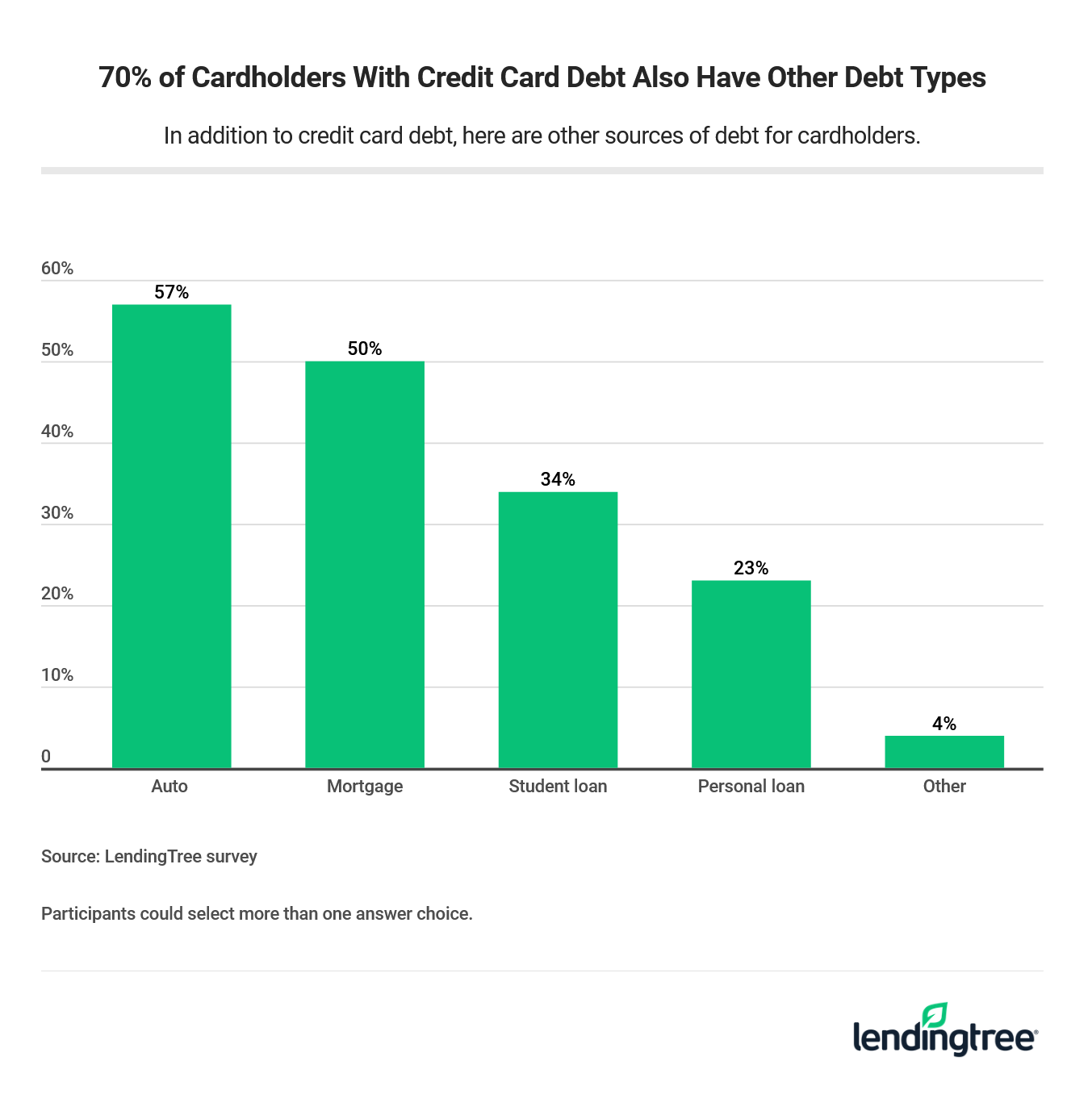 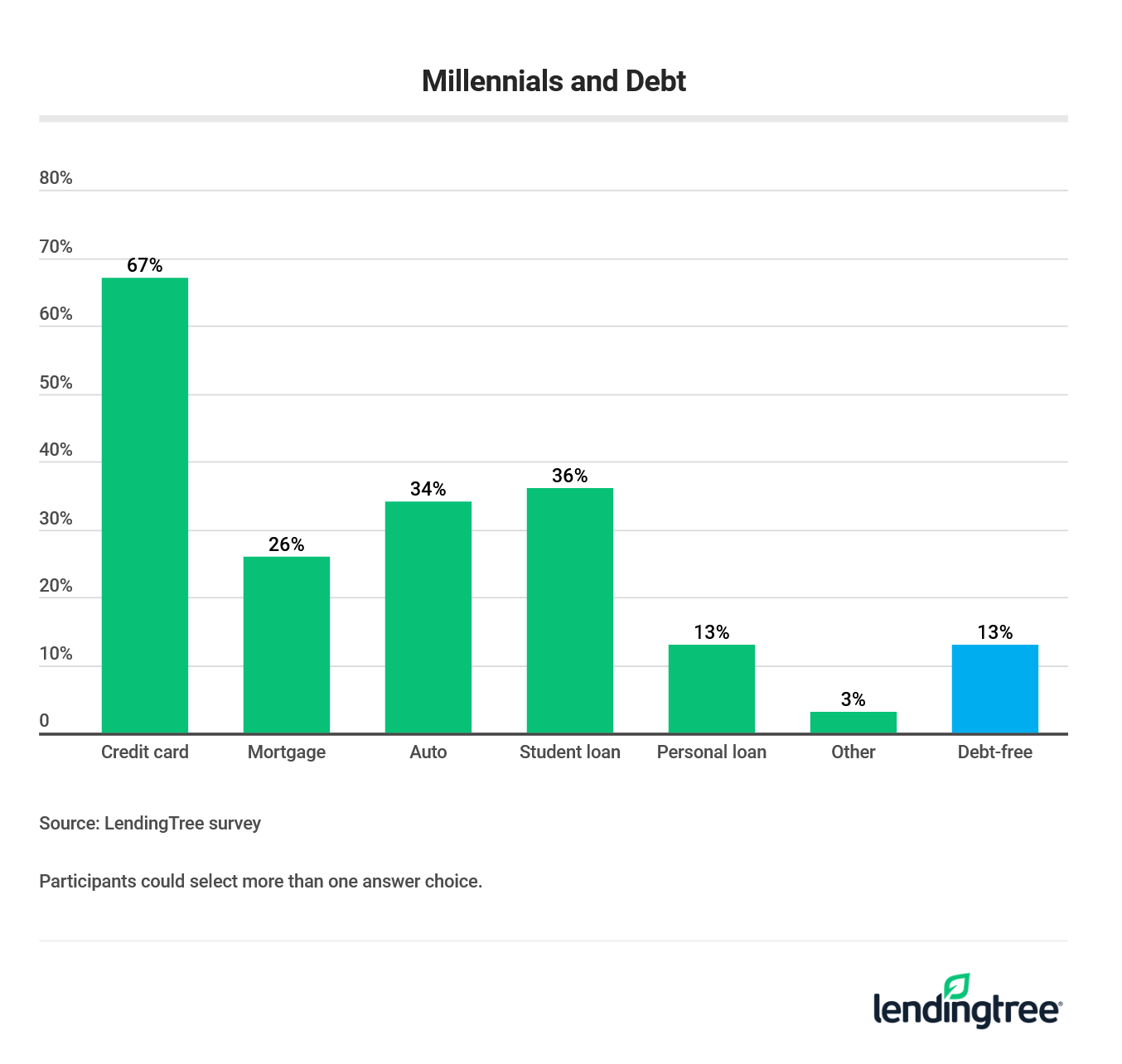 The average college graduate left school in 2018 with $29,800 in student loan debt, while the average credit card debt balance for cardholders under 35 is $5,808.

However, by taking a look at the big picture, only 13% of millennials are completely debt free. Still, even millennials who have managed to pay off student loans (or who never had student loans) may not be faring much better. Most are dealing with other forms of debt: mostly credit cards, but also products like auto loans, mortgages and personal loans.

“There’s no one-size-fits-all answer to help millennials with their debt woes,” said Matt Schulz, chief credit analyst at LendingTree. “A 35-year-old with two kids, two cars and a mortgage is likely in a much different place than a 24-year-old recent college graduate who is drowning in student loans and trying to get her career started, but they’re both millennials.” 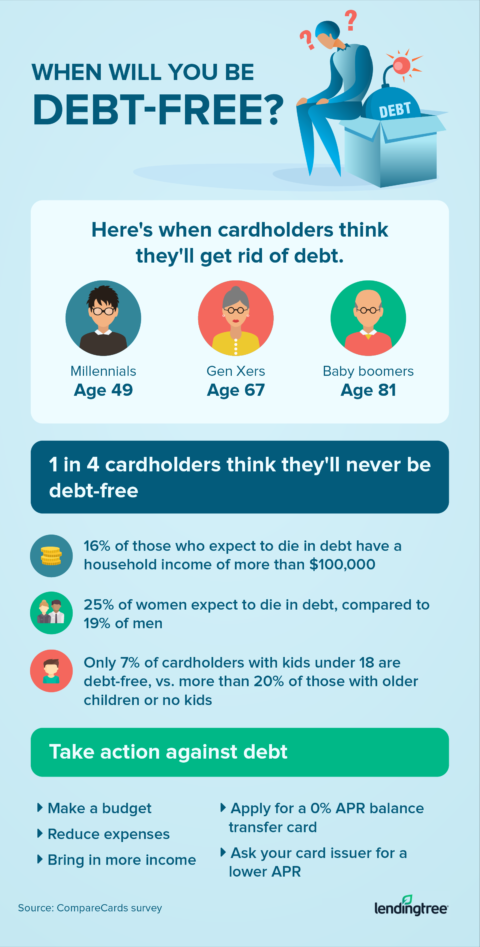 It’s not just low-income folks who are battling debt

Some higher-income households are also feeling the pinch. Sixteen percent of households that earn over $100,000 per year expect to die in debt. Cost of living is a factor that could cause higher earning households to struggle financially.

Paying for basics like housing, daycare, transportation and groceries may cause financial strain in certain high cost locations even if you have an above average household income. This could lead to an overreliance on credit cards.

Another factor in play is that wealthy households are known to carry a higher debt load than low-income households because of investments, leisure activities and other financial responsibilities. Racking up a five-figure credit card balance may not be out of the ordinary for a household that can comfortably afford monthly debt payments. Revolving a balance and paying interest charges may not break the bank either because of their wealth.

While keeping high credit card balances may work for some households, others may find it leads to a credit card trap.

Seventy-percent of Americans who have credit card debt also have at least one other form of debt, including auto loans (57%), mortgages (50%) and student loans (34%).

Notably, 23% of people with credit card debt also have a personal loan, which could indicate that consumers are turning to personal loans for debt consolidation rather than a credit card balance transfer. However, a personal loan can also be used to finance a wide variety of other major purchases, like home renovations or remodeling or a medical procedure.

Schulz warns consumers not to get in over their heads with debt. “In a good economy like we have today, these numbers are terrifying,” said Schulz. “The truth is that if you’re carrying this much debt when times are good, it means you’re probably not putting enough money away for when things turn bad.”

Keeping up with debt payments to stay on good terms with your creditors is a priority, but putting money away for a rainy day should also be high on the “to do” list. As Schulz noted, an economic downturn could be around the corner, and things can get ugly quicker than people think.

Whatever the debt, many have lost hope

The survey found some disheartening results when credit card users were asked about their long-term financial outlook. Almost 1 in 4 cardholders believe they’ll take debt to their grave. Borrowers who see no light at the end of the tunnel may be discouraged.

“Debt is everywhere, and it can feel all-consuming, but the worst thing you can do is give up hope and stop taking action,” said Schulz. Putting an additional $10 or $20 towards your credit card bill each month or making additional cash from a side hustle to put towards debt can be a game changer, he said.

Debt doesn’t have to be a financial death sentence. Throwing in the towel and giving up will only make matters worse. Here are some suggestions on how to start taking action:

Make a budget. A budget is basically a spending plan. It’s a strategy for how you’ll distribute the income you earn each month. Keeping track of where your money is going can help you curb overspending and find opportunities to put more cash toward debt. Consider using an online budgeting system like Mint or a simple Excel spreadsheet to track how much money is coming in vs. how much is going out.

Reduce expenses. Once your budget is in place, take a serious look at areas where you can reduce expenses. Maybe you can cut your landline or your Hulu membership. Maybe you can downsize your living arrangements or take on a roommate. Each time you lower an expense, you can put the savings toward your debt.

Sell something of value. Take an audit of what you need and don’t need in your home. Selling furniture, jewelry, old toys, memorabilia or other items could give you extra cash to put toward your debt.

Bring in more income with a side hustle or second job. You may not be earning enough income to put a serious dent in your debt while keeping up with other bills. If so, you may want to look into starting a side hustle, increase your hours at work or start a second job to give you the extra money you need to get ahead.

Apply for a 0% APR balance transfer card. Some credit cards offer a 0% APR promotion for a fixed time period, from which you can transfer high-interest card debt. The promo typically lasts for 6 to 21 months depending on the credit card. During the 0% interest period, you can work at chipping away at principal without interest charges getting in the way. Some balance transfer cards may have a fee ranging from 3% to 5%, which is something to consider when weighing the cost versus benefit.

Commit to acting. Debt can be overwhelming. You may not be able to pay off all of your debt tomorrow, but the small steps you take today can lead to paying off debt faster than you planned. Actions taken consistently over time can have a major impact on your debt balances.

LendingTree commissioned Qualtrics to conduct an online survey of 1,046 American cardholders, 839 of whom have at least one debt. The survey was fielded June 7-11, 2019, with the sample base proportioned to represent the general population. Generations are defined as follows:

13% of Millennials are Debt-Free, Credit Card Debt Most Common Problem