44% of Americans Plan to Apply for Store Credit Card This Holiday Season; Big Jump From 2019

A lot more Americans say they’re likely to apply for a store credit card this holiday season than did in either of the previous two years, according to a new report by LendingTree.

That’s despite the fact that more than half (56%) of people who say they’ve had a store credit card say they’ve regretted getting one.

For the third straight year, LendingTree surveyed consumers about their perceptions, behaviors and beliefs around store credit cards, which are typically easier to obtain than other types of cards but also tend to have higher APRs and subpar rewards.

We also reviewed credit cards from the nation’s largest retailers for our report. This year, we looked at the terms and conditions of 85 cards from 61 retailers.

We found good news when it came to credit card APRs. They’re still high, but they’ve fallen, thanks mostly to rate reductions by the Federal Reserve in response to the pandemic and ensuing economic crisis.

Not all the news was good, however. We found more people interested in getting these sky-high-APR cards, more regrets among those with these cards and more people relying on them as their primary credit card. 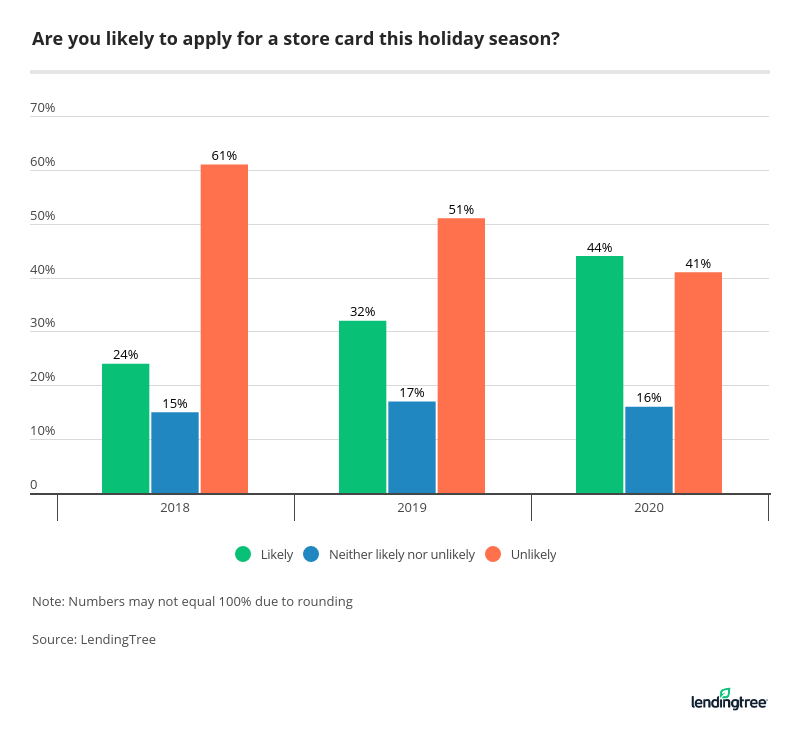 More than 4 in 10 Americans (44%) said they’re at least somewhat likely to apply for a store credit card this holiday season. That’s up 20 percentage points from just two years ago.

That growth was somewhat surprising when you consider that store credit cards are traditionally associated with a pressure-packed hard sell from a clerk at the checkout counter of a brick-and-mortar store. Nearly two-thirds (63%) of consumers said in our survey that they’d felt pressured by a sales associate in the past to sign up for a new store card.

There’s a reason why those pitches continue: They work. Nearly half (49%) of those who said they felt pressured in the past did actually sign up for the card because of that pressure. That’s a success rate that most any salesperson would love.

However, with people likely to shop online more because of the pandemic, there will likely be fewer opportunities for those types of face-to-face sales pitches. Yet, more consumers say they’re likely to apply anyway. That’s certainly good news for retailers, many of which are in dire need of some positivity.

Gen X among most likely to apply 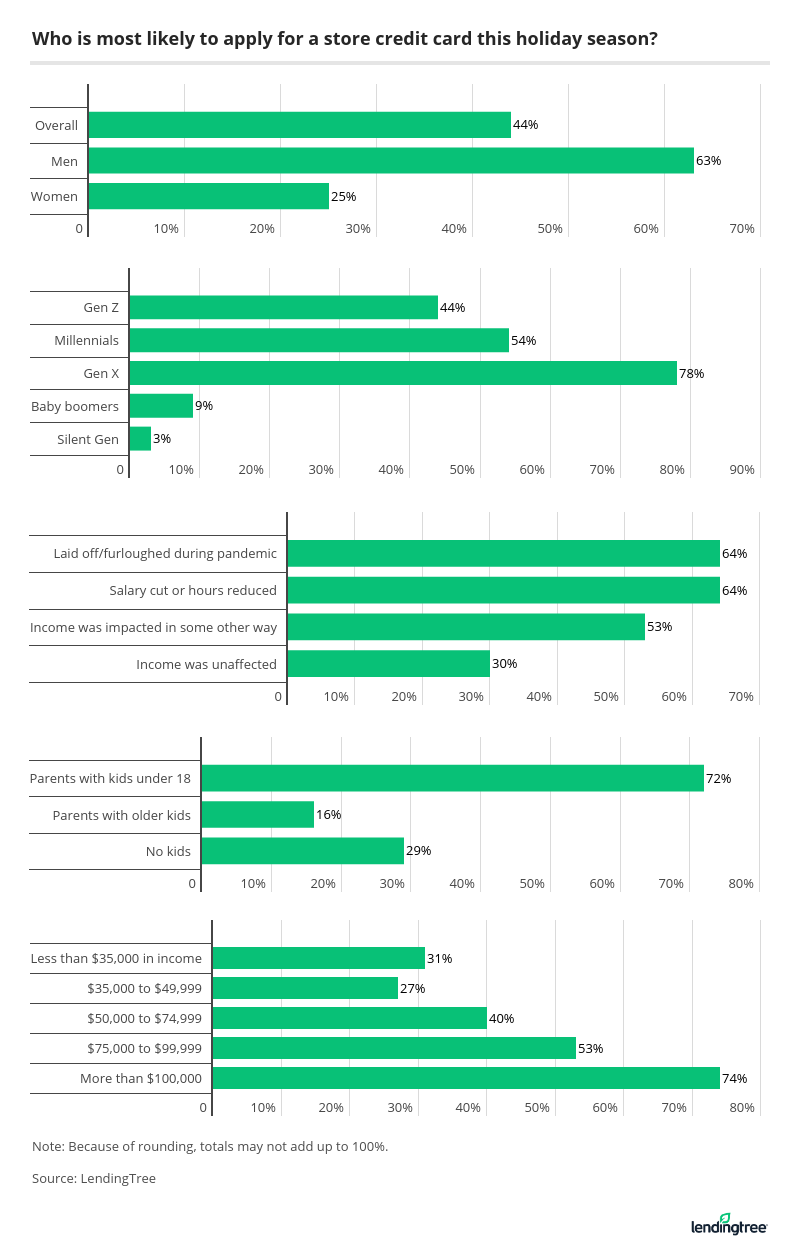 Not all consumers are planning to jump in, however.

Store credit cards tend to attract a wide range of people. People just getting started with credit like them because they’re usually easier to qualify for than other types of cards. Folks with imperfect credit and those struggling financially like them as well, for similar reasons.

However, high-income consumers with great credit are also fans as they look to them for discounts on large projects, like a home remodel, or for rewards. Many retailers have introduced tiered-rewards programs in recent years, giving better rewards rates and other perks when you spend more at their store.

This year’s survey shows that split well. Young consumers are highly likely to apply, as are those hardest hit financially by the pandemic are most likely to apply. Yet those with incomes of $100,000 or more are among the most likely of any group to say they’ll apply.

It’s always vital to know the possible APRs associated with a credit card before you apply for it, but that’s particularly important with store cards because the rates are often far higher than those of regular credit cards – sometimes even nearing 30%. That’s certainly still true in 2020, even though rates for all credit cards have fallen, largely thanks to the Federal Reserve lowering the rates in the early days of the pandemic.

Note: The all credit card average shown is the one that was most current at the time that year’s Store Card Report was released.

While the average store credit card interest rates have changed, cards that had high APRs in 2019 tend to still have high rates today. Those with low rates last year tended to have low ones this year. That’s why the below list of cards with the highest and lowest APRs is remarkably similar to last year. The retailers are the same, though in slightly different order, and some of the rates have changed, but not all of them.

One major positive: For the first time in the three years we’ve done this study, no card featured an APR of 30% or higher. Yes, four cards had 29.99% APRs, but none breached the 30% barrier. 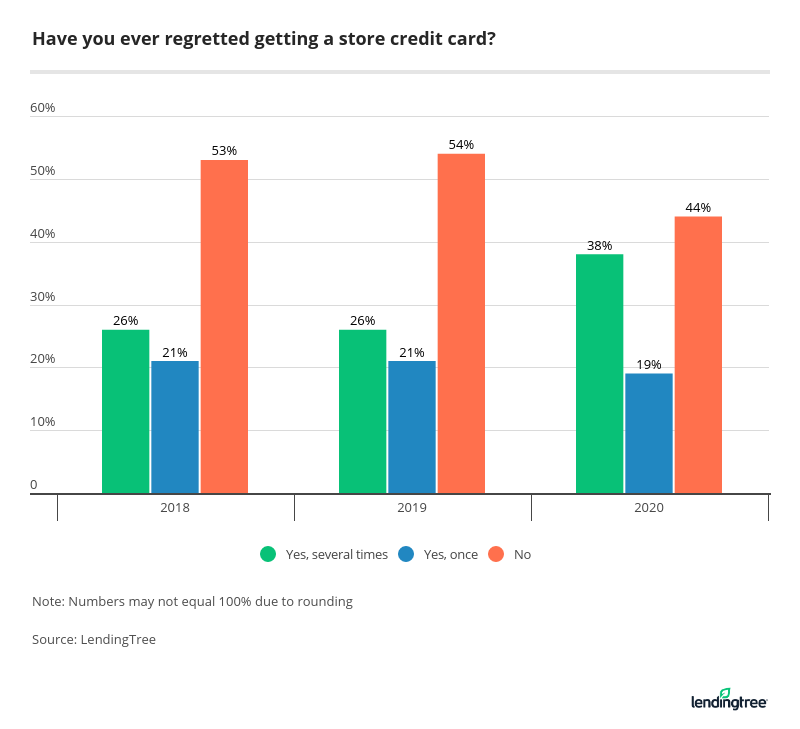 With those sky-high rates, it’s easy to see why some people would end up regretting signing up for a store credit card. Those sign-up bonuses can be great – 65 of the 85 reviewed cards had one, typically a gift card or some discount on the first purchase made with the card. Still, if you carry a balance on one of these cards, the interest you pay with those high APRs can easily exceed what you saved with that initial discount.

Unfortunately, nearly half (49%) of those with a store card have debt associated with it. 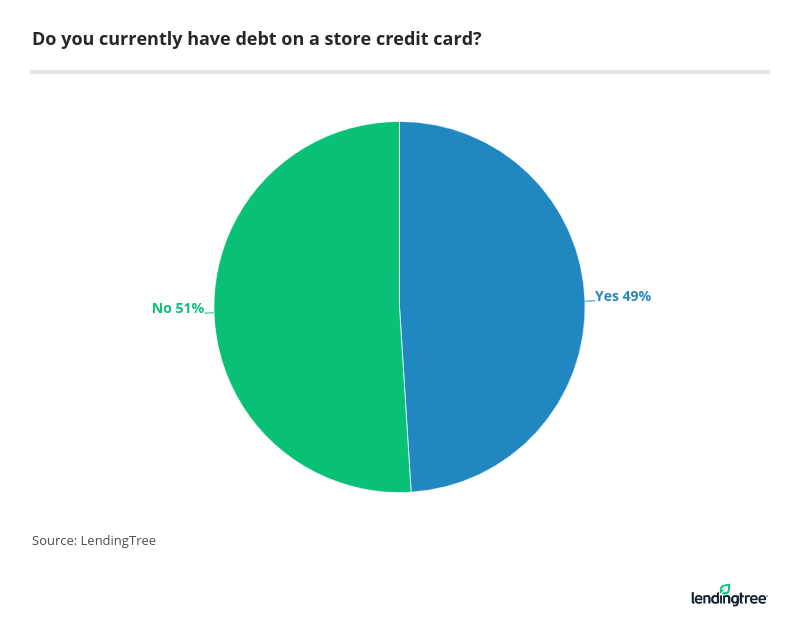 That number may be troubling, but perhaps it shouldn’t be surprising, given that more than half (59%) of folks with a store card said that it was the credit card that they used the most. 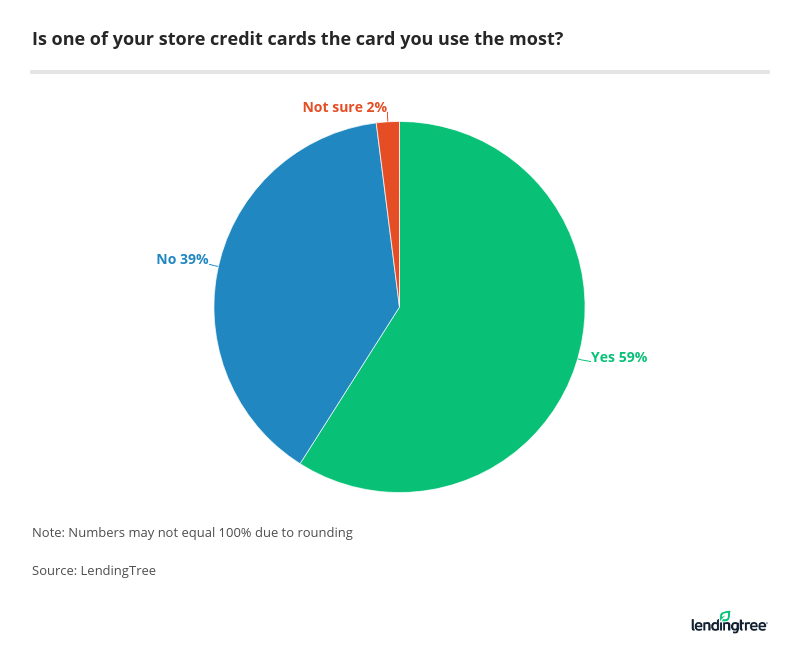 Again, for many people, a store card is one of the few credit card options available to them. Especially today, with many financial institutions still dialing back lending in the wake of the pandemic, it can be challenging for someone with poor credit or thin credit to qualify for a general-purpose credit card.

That can make a store credit card – especially from a retailer they might visit frequently such as a Walmart or Target – really appealing, despite the high rates.

The bottom line: Proceed with caution

In normal times, it’s best to avoid store credit cards if you expect to carry a balance. The rates are simply so high, even by credit card standards, that the math works against you in a big hurry.

These, of course, aren’t normal times, though. Sometimes the old rules don’t apply.

When compared to payday loans, for example, a store credit card can be the best of a bunch of subpar options for folks whose financial lives have been flipped upside down by the pandemic. They must be used wisely, however.

Here are a few tips for getting the most out of a store credit card:

LendingTree reviewed credit card offers from 61 of the nation’s biggest retailers, including both brick-and-mortar and online-only stores. In all, 85 cards were reviewed. Of those cards, some were co-branded — meaning that in addition to the retailer’s name and/or logo, they bore either a Visa, Mastercard, American Express or Discover logo and could, therefore, be used anywhere that accepted those types of cards — and some were not co-branded — meaning they could only be used in that particular store or family of stores. We reviewed basic terms and conditions, including APRs and annual fees, as well as evaluating the cards’ rewards programs. We primarily reviewed offers online but also reviewed paper documents for those cards that were not available to be applied for online. Credit card offer data is accurate as of Oct. 2, 2020.

LendingTree commissioned Qualtrics to conduct an online survey of 1,028 American consumers, with the sample base proportioned to represent the overall population. The survey was fielded Sept. 11 to 14, 2020.

44% of Americans Plan to Apply for Store Credit Card This Holiday Season; Big Jump From 2019

A new LendingTree survey reveals that more Americans are likely to open a store card during the holidays, but many ultimately regret it.