Down the Rabbit Hole: 18% of Disney Goers Have Racked Up Debt, But Most Have No Regrets

Disney parks long maintained the slogan, “Where Dreams Come True,” but those dreams can come at a cost.

We’ll also highlight the percentage of Disney goers who regret going into debt for their trip — and what costs surprised them the most. Keep reading for more information.

Majority of amusement parkgoers have been to a Disney park

Amusement parks are popular pastimes for consumers, and Disney is arguably the king of all amusement parks. Overall, 87% of Americans have been to a theme park or amusement park. Of this group, 74% have visited a Disney park. 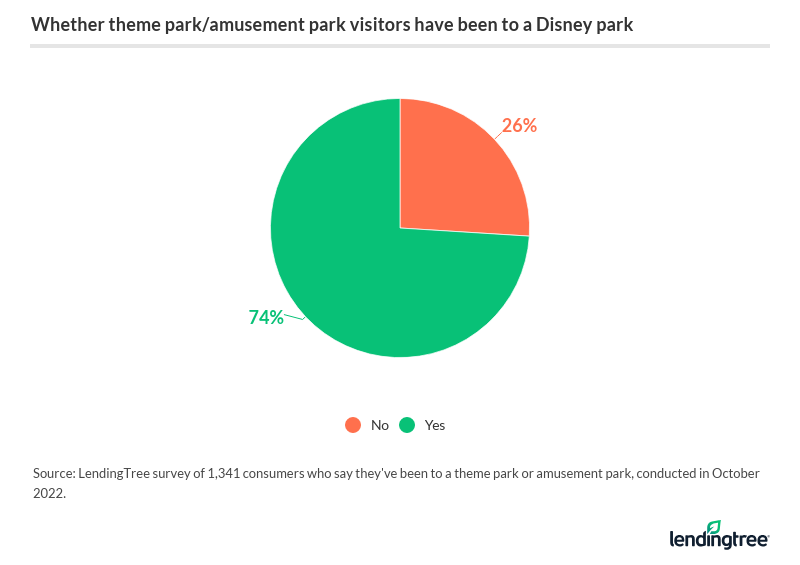 While there’s virtually no difference by generation among those who’ve been to a theme park, there’s variance among those who’ve been to a Disney park. While cost likely plays a significant role, consider baby boomers’ trips with grandkids and other family members. Of the people who’ve been to a Disney park at least once, 85% say they most often go with their families, 66% of which includes children. Trips with children are especially common for those with kids younger than 18 (83%), those with adult children (75%), six-figure earners (74%) and married Disney goers (73%).

What about the 13% of consumers who’ve never been to a theme park? This group says costs are the top reason for skipping parks, with nearly half (48%) citing this. Following that, 30% say theme parks are too far away, while 29% say they’d instead go elsewhere. 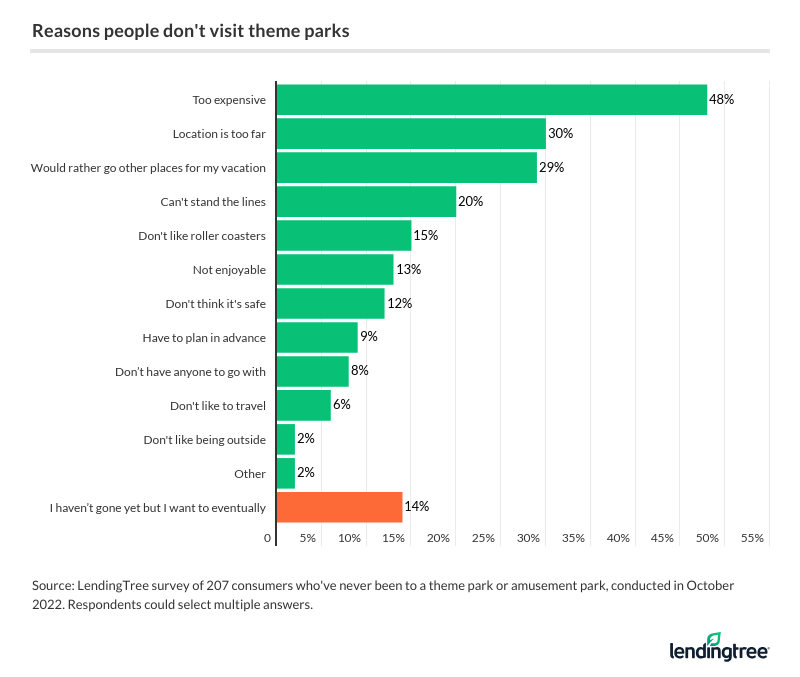 One-day, one-park tickets cost an average of $140-plus — do Disney goers go into debt for it?

Most theme parkgoers have been to a Disney park, but costs aren’t cheap. Over the next year (from November 2022 through October 2023), the average price for a one-day, one-park ticket at Disney World is $141.74 — but that’s just what gets you through the gates.

An analysis conducted by Mouse Hacking found that the baseline Disney World vacation for a family of four (including two adults, one child 10 or older and one child 3 to 9) costs $5,731 in 2022 — or $287 per person per night. That includes:

Despite the costs, though, Disney attendees seem like they’re saving up for their trips. Of those who’ve gone to Disney, only 18% say they went into debt for one or more of these trips. 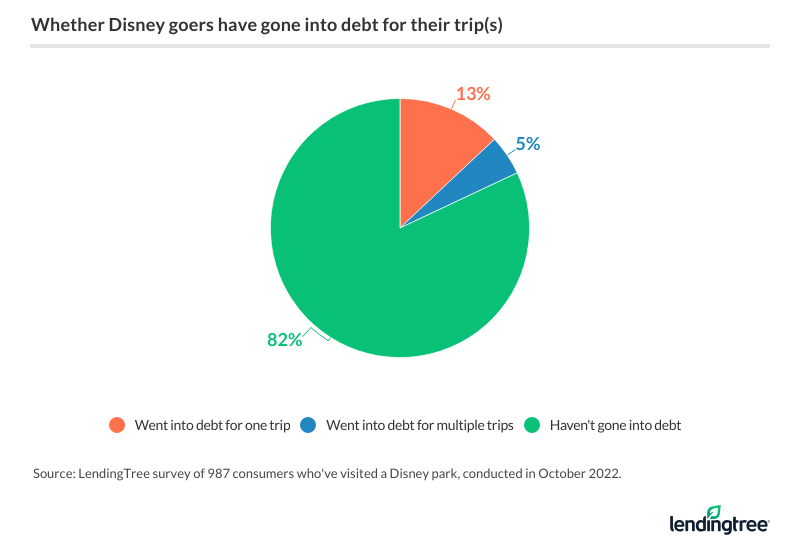 Understandably, parents with children younger than 18 are the most likely to incur Disney debt, at 30%. Meanwhile, six-figure earners are more likely to go into Disney debt than any other income group — 26% of those earning $100,000 or more yearly have gone into debt for Disney. Disney goers earning between $35,000 and $49,999 are the least likely, at just 12%.

By generation, millennials ages 26 to 41 (27%) are the most likely to have incurred Disney debt. That compares with:

Notably, nearly a quarter (24%) of men have gone into debt for Disney — 10 percentage points higher than the 14% of women who say the same.

The reason why so few go into debt to afford their trips? Discounts might help. In fact, 42% of Disney goers say they’ve used discounts for their trip. That figure’s highest among parents with young children (51%), millennials (50%) and six-figure earners (49%).

The money is worth the magic for most of the 182 respondents who’ve gone into Disney debt. Just over 7 in 10 (71%) Disney attendees who went into debt say they don’t regret it. It may be because they’re not sweating the payments. The majority (80%) of indebted Disney goers say they’ll pay off their debt in six or fewer months. 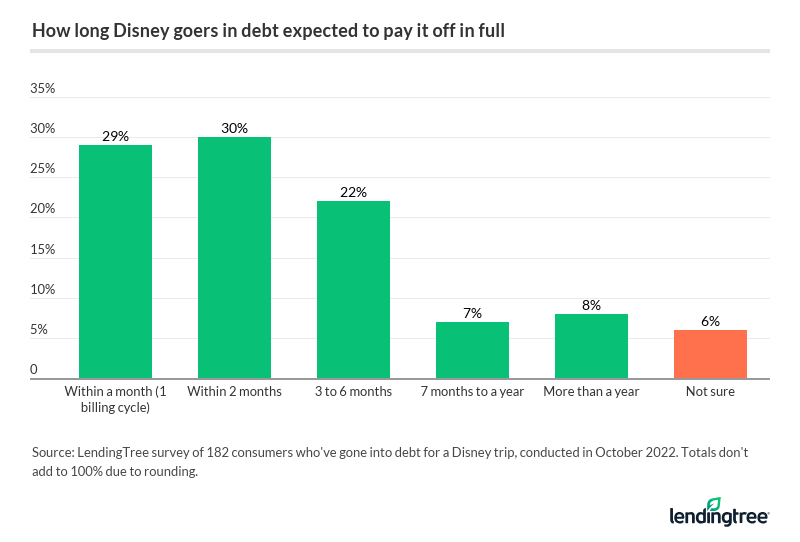 LendingTree chief credit analyst Matt Schulz says consumers shouldn’t regret taking on debt — as long as they can pay it off promptly.

“A Disney trip can be an experience that you and your family remember for the rest of your lives, and those are the types of things people are willing to go into debt for,” he says. “You shouldn’t take on a debilitating amount of debt and you shouldn’t do it very often, but if you need to take on a few months of debt to afford that once-in-a-lifetime Disney trip, it can be OK.”

From food and beverages to admission costs, here’s what was more expensive than consumers expected

While many consumers likely expect to go into debt ahead of their Disney trip, surprise costs may account for some of the debt incurred. Among those 182 respondents who’ve gone into Disney debt, they’re most likely to say that in-park food and drinks (56%) were more expensive than expected.

Schulz says a lack of competition is to blame for high dining prices within an amusement park.

“Sure, you could head back to the car and grab lunch somewhere outside the park to save some money and then come back for the rest of the day, but no one is going to do that,” he says. “Knowing that, the park can basically charge what it wants, and prices go sky-high.” 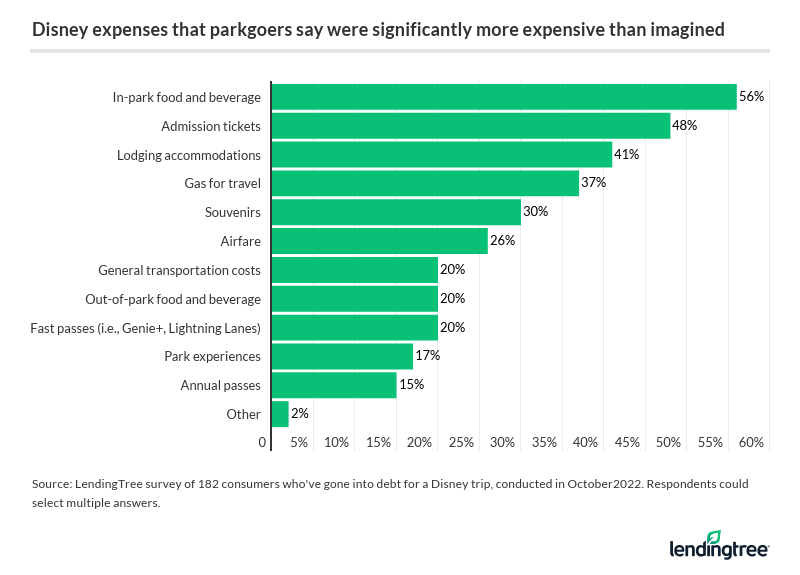 Following that, 48% say admission costs were unexpectedly pricey. This comes as Disney World advertises one-day, one-park ticket prices as low as $109. However, we found this price is only available for 20 days across the November 2022-to-October 2023 period analyzed. While the average price across the entire period is $141.74, September has the cheapest average ($126.50) and December has the most expensive average ($149.03).

Beyond in-park meals and admissions, consumers with Disney debt are likely to say lodging costs (41%) and gas for travel (37%) were more expensive than they originally thought.

While affording that magical Disney experience may be difficult amid inflation, you can still take your trip to the “Most Magical Place on Earth” (or whichever park you choose) without sweating the costs. Particularly, Schulz recommends:

LendingTree commissioned Qualtrics to conduct an online survey of 1,548 U.S. consumers ages 18 to 76 from Oct. 5-6, 2022. The survey was administered using a nonprobability-based sample, and quotas were used to ensure the sample base represented the overall population. All responses were reviewed by researchers for quality control.

To calculate ticket costs, LendingTree analyzed the cost of one-day, one-park Disney World tickets between November 2022 and October 2023. Prices were analyzed on the Disney World website on Oct. 13, 2022.

Debt Consolidation: Pros and Cons of This Debt Relief Approach

READ MORE
5 Things to Do After Debt Consolidation

Consolidating debts from credit cards, student loans or other debt can result in a lower interest rate. But once you’ve consolidated, what do you do next?