57% of Quiet Quitters Say Their Work-Life Balance Has Improved; For Working Parents With Young Children, It’s Even Higher

Millions of Americans left their jobs in waves during the Great Resignation that began in 2021, but employees now are increasingly choosing not to resign — at least conventionally. Enter quiet quitting, a trend in the workplace power struggle where employees refuse to go above the bare minimum without additional pay.

In this latest LendingTree survey, we asked more than 2,000 U.S. consumers about their experiences with the quiet quitting movement. Here’s what we found.

The quiet quitting movement is popular with a significant portion of the American workforce: 3 in 10 (30%) workers consciously participate in quiet quitting. Young workers are the most likely to participate, with 40% of Gen Zers ages 18 to 25 identifying as a quiet quitter. That’s followed by:

Workers without children are more likely to be quiet quitters, at 33%. Those with children younger than 18 aren’t far behind, though, with 31% participating in the quiet quitting movement. That compares with 20% of workers with adult children.

Quiet quitters seem to benefit from the movement, with 57% saying their work-life balance has improved. This figure is highest among working parents with underage kids, at 65%. 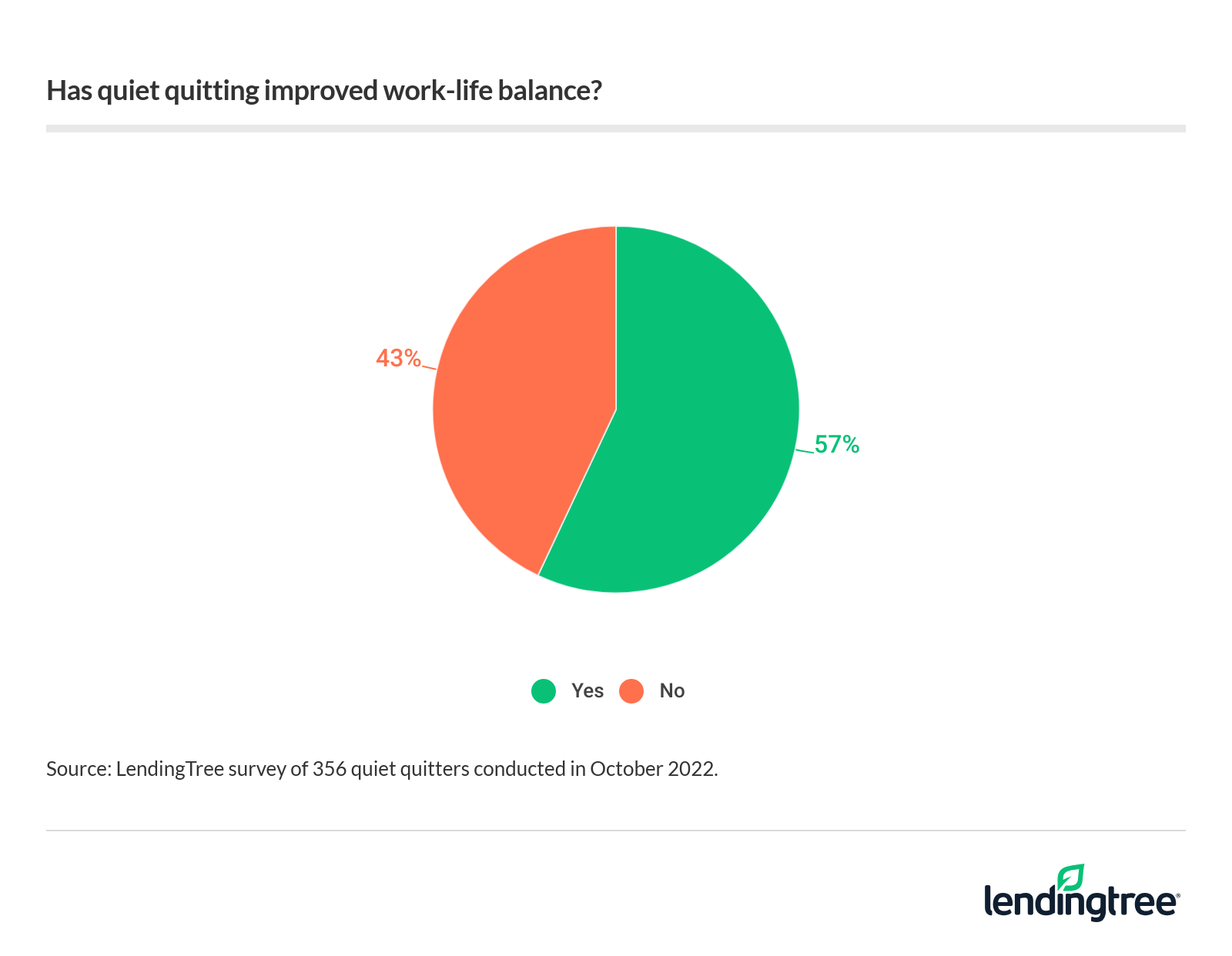 Despite the noticeable benefits, just 22% of workers think the quiet quitting movement is positive. While the majority (49%) of consumers say they’re neutral, 30% think it’s negative.

LendingTree chief credit analyst Matt Schulz says he’s a little surprised that more people view it negatively than positively. Still, he thinks it may stem from the belief that the movement is passive-aggressive.

“Critics of the movement say you may be better off addressing whatever issues you might have head-on, sharing your concerns with your employer in hopes of improving your situation rather than just mentally checking out,” he says. “If you can’t resolve your issues with your employer, it may make sense to find another job that you might find more engaging or motivating. However, you can’t know if a problem is fixable if it’s never really openly addressed in the first place.”

Quiet quitting may be a snappy new(ish) term, but the movement itself is anything but. In fact, 59% of quiet quitters say they were already drawing hard lines at work before they’d heard of the term. Only a little over a quarter (26%) say they started mentally checking out after learning about it. 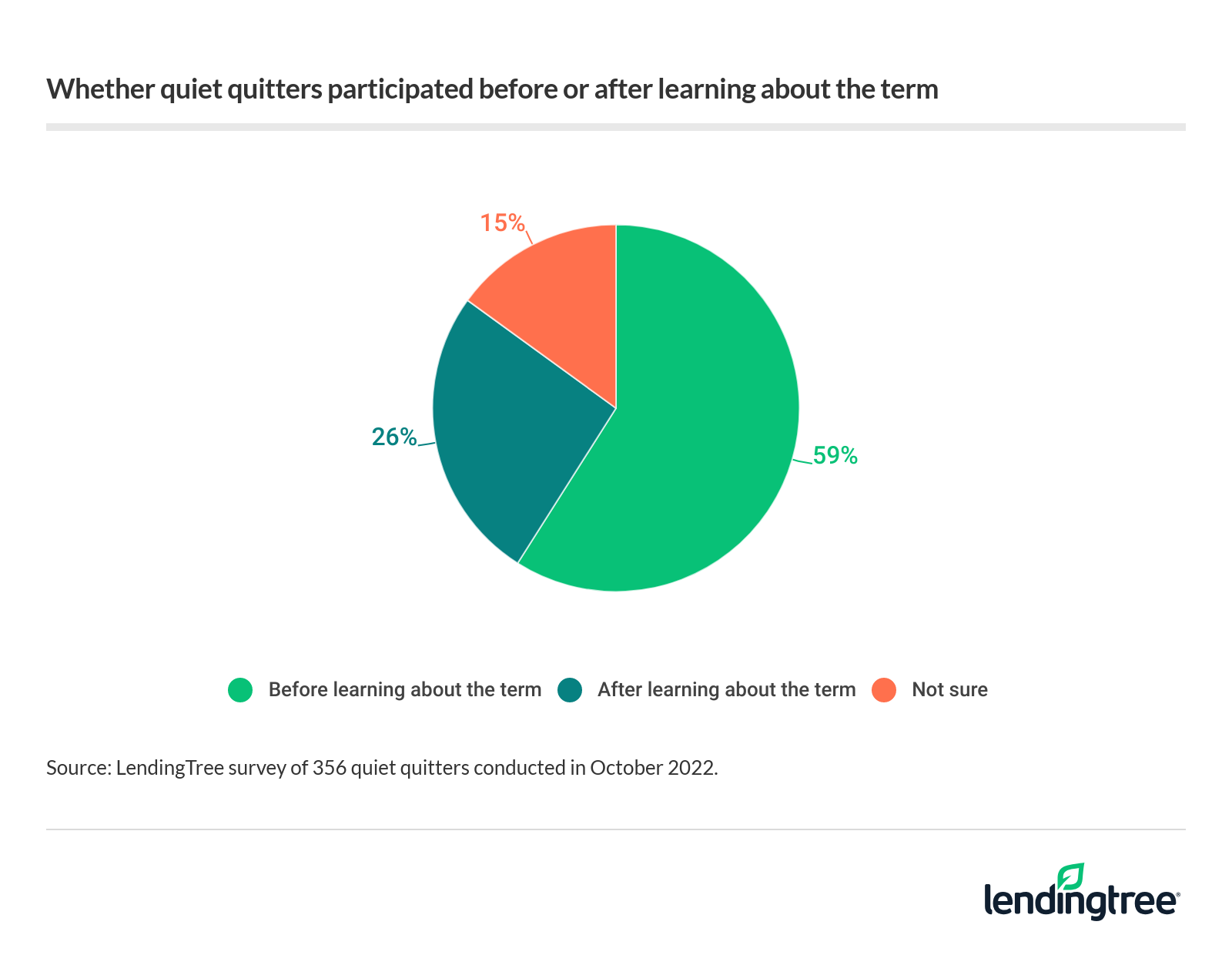 “If someone is quiet quitting, they’re clearly not satisfied with their job,” Schulz says. “If you’re not happy with your job, it’s often only a matter of time before you start mentally checking out or looking for a new one.”

Quiet quitters are more likely to be on the job hunt 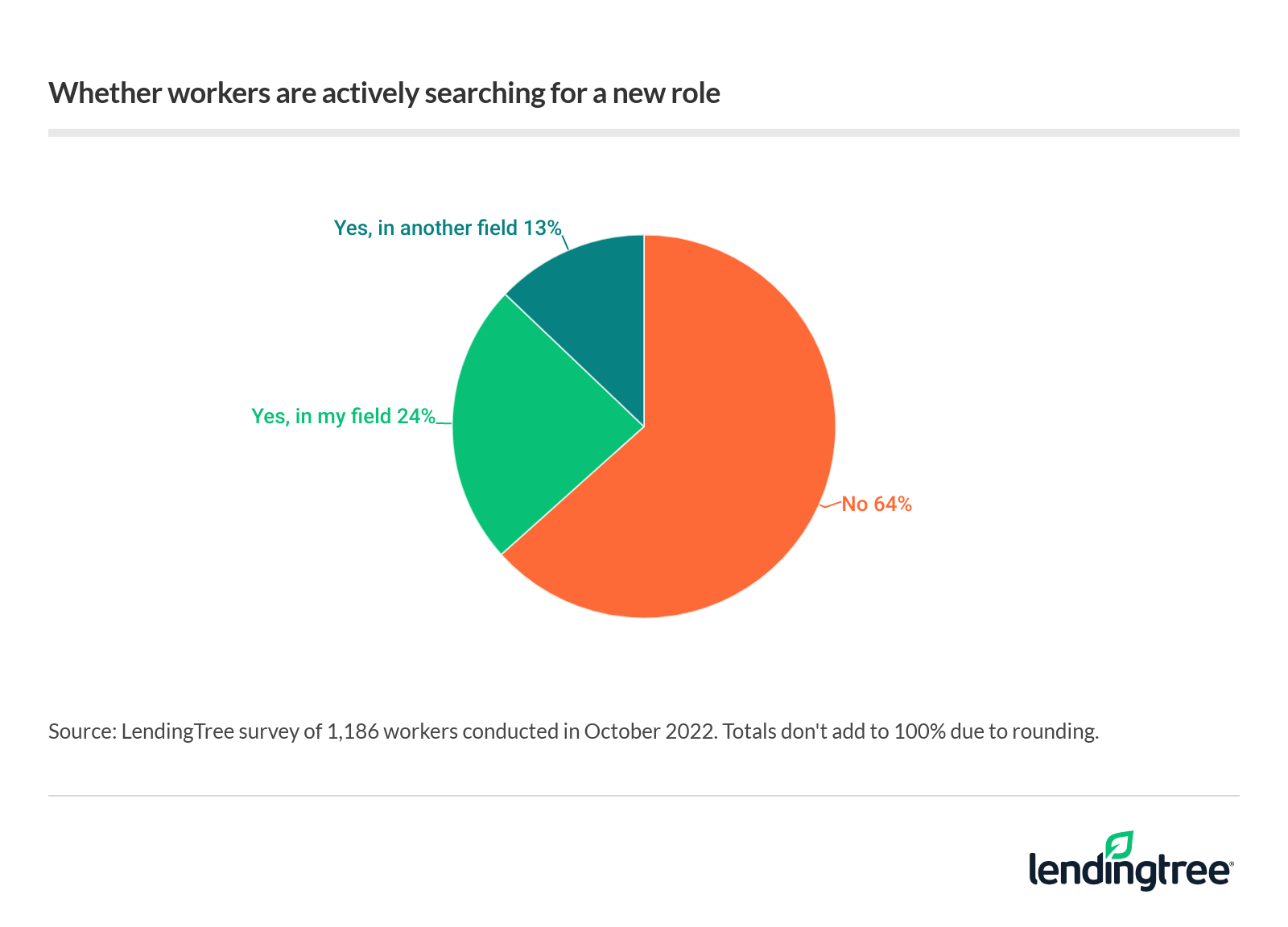 The same groups participating in quiet quitting are also the most likely to seek a new role. Across all workers (not just quiet quitters), Gen Zers are the most likely age group to consider resigning. Of this generation, 47% say they’re actively searching for a new role. That compares with 19% of baby boomers — the least likely group to resign.

In a stark contrast to the Great Resignation, economywide layoffs also have consumers concerned — but quiet quitters are particularly worried that their recent slacking may come back to bite them, as over a quarter (26%) of quiet quitters don’t feel secure in their role. That compares with 15% of workers and 10% of non-quiet quitters.

Regardless of whether they participate in the quiet quitting movement, the lowest-income consumers are also worried about their job security. Among those earning less than $35,000 annually, 21% say they don’t feel secure in their role. Despite being just one pay bump ahead of them, only 11% of those earning between $35,000 and $49,999 say similarly — a difference of 10 percentage points.

Some quiet quitters have trouble cutting back on work

Although they’re only doing what’s expected of them, quiet quitters aren’t exactly twiddling their thumbs all day. Of those participating in the movement, 36% say they work more than their required hours. Comparatively, 42% of non-quiet quitters say similarly. 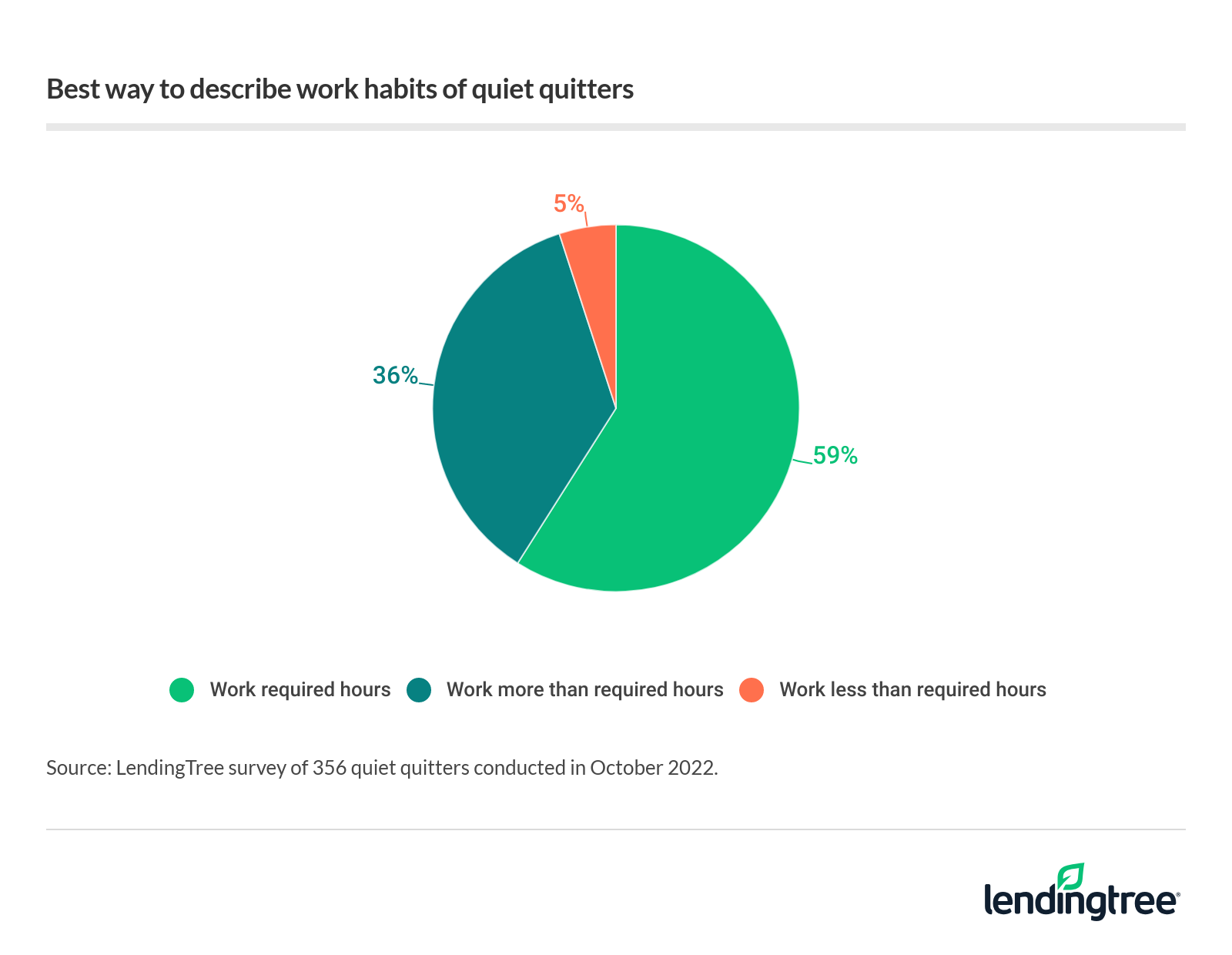 Meanwhile, only 5% of quiet quitters say they work less than their required hours — though that’s still significantly more than the 2% of non-quiet quitters who don’t fill their workday.

Across all generations, Gen Zers are least likely to not use all their PTO. Quiet quitting or not, 60% of this generation say they don’t use up their PTO. On the other hand, just 38% of baby boomers say similarly.

Setting professional boundaries could play a role in job satisfaction

The quiet quitting movement is rooted in setting professional boundaries, and the data indicates that it may work — at least in some ways. Among quiet quitters, 40% say they’re more engaged at work than in the past. Quiet quitters are most likely to cite being very satisfied with their co-workers (30%), boss or manager (25%) and work environment (24%). 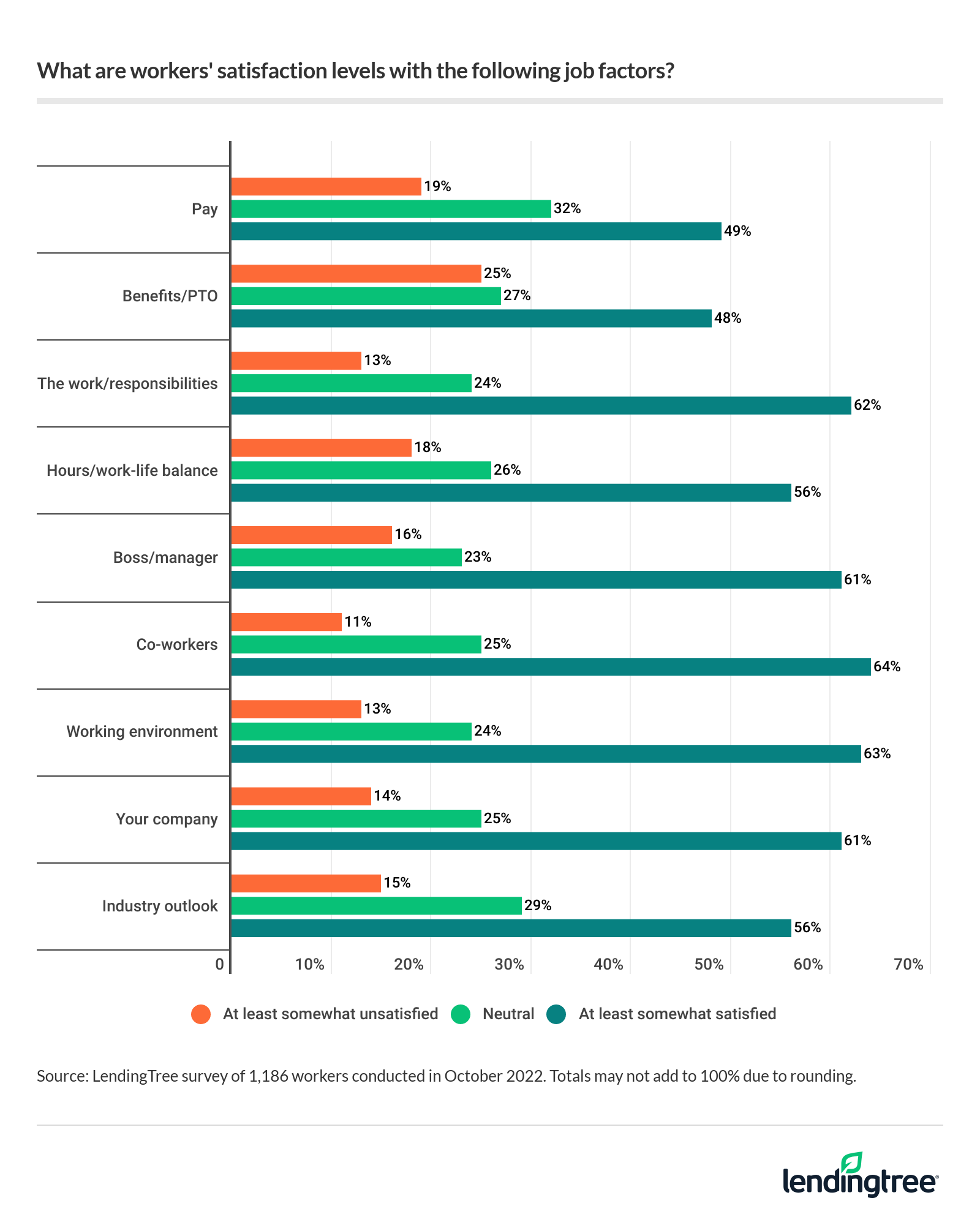 Schulz says setting firm professional boundaries can help people feel better about their jobs — and you don’t necessarily need to participate in the quiet quitting movement to do so.

“The last thing anyone wants is to feel taken advantage of in their job, and laying down some guardrails when it comes to your job responsibilities can help you make sure that doesn’t happen,” he says. “That doesn’t mean that you should never put in extra hours or that you can’t ever help out with things that are a little out of your job description every once in a while. It just means you’re willing to speak up when you feel something is out of bounds.”

If setting work boundaries frightens you, don’t worry — we have tips.

How to set professional boundaries at work

Though the benefits of setting professional boundaries are clear, it’s a scary prospect for most people.

“Setting and maintaining boundaries isn’t easy,” Schulz says. “It requires honest discussions with your supervisors and co-workers. It also requires diligence in making sure your boundaries are respected. It’s OK to let something slide a time or two, but if your boundaries are stepped over too often or in too big of a way, you need to be firm and speak up, even if it may make things kind of awkward around the office for a bit.”

If you’re looking to set harder boundaries at work, he recommends:

The latest LendingTree study reveals that the percentage of people who’ve worked from home has remained relatively stable over the past year.

READ MORE
43% of Americans Expect to Add Debt in Next 6 Months, Especially Parents With Young Children

22 million Americans owe a collective $210 billion in personal loans. Check out our personal loan statistics roundup for a deeper look.