Homeowners Could Have Made Millions by Selling Their Homes for Bitcoin

Since the start of the coronavirus pandemic, home prices have grown significantly across much of the U.S. But homes aren’t the only assets that have risen in price over the past few years — compared to the rise in the value of Bitcoin, recent home price growth seems relatively tame.

To better understand the value of Bitcoin, LendingTree used U.S. Census Bureau and CoinDesk data to look at how many bitcoins it would have taken to buy a median-valued home in each of the nation’s 50 largest metros in 2019. We then looked at how much money those bitcoins would be worth today. To help accomplish this, we calculated the average closing price of Bitcoin in U.S. dollars in 2019 ($7,363) and 2021, through Oct. 31 ($45,909).

Using these averages, we found that if homeowners sold their median-valued homes for Bitcoin in 2019 and then held onto those bitcoins until 2021, even those in the nation’s least expensive large metros would be millionaires. 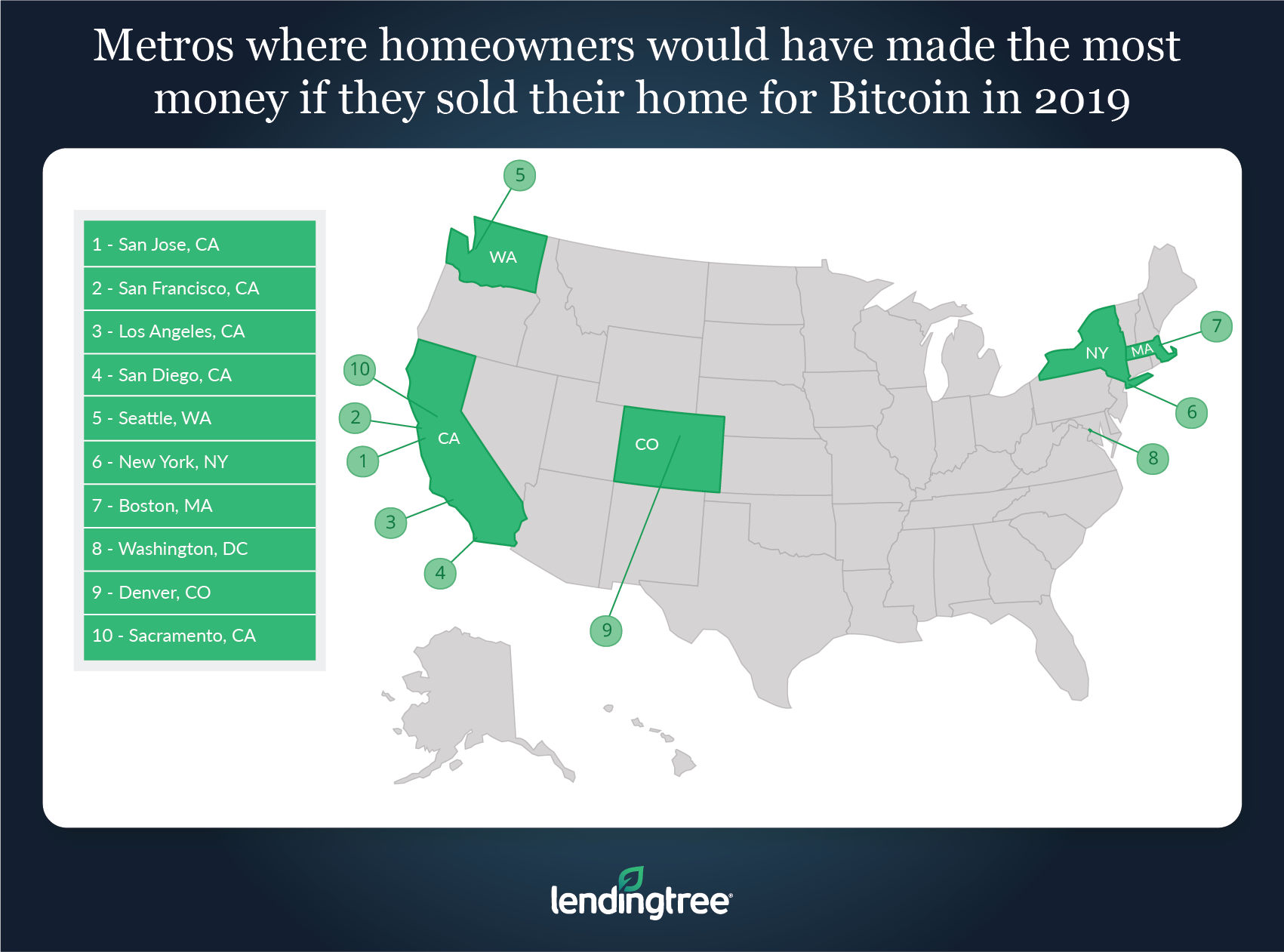 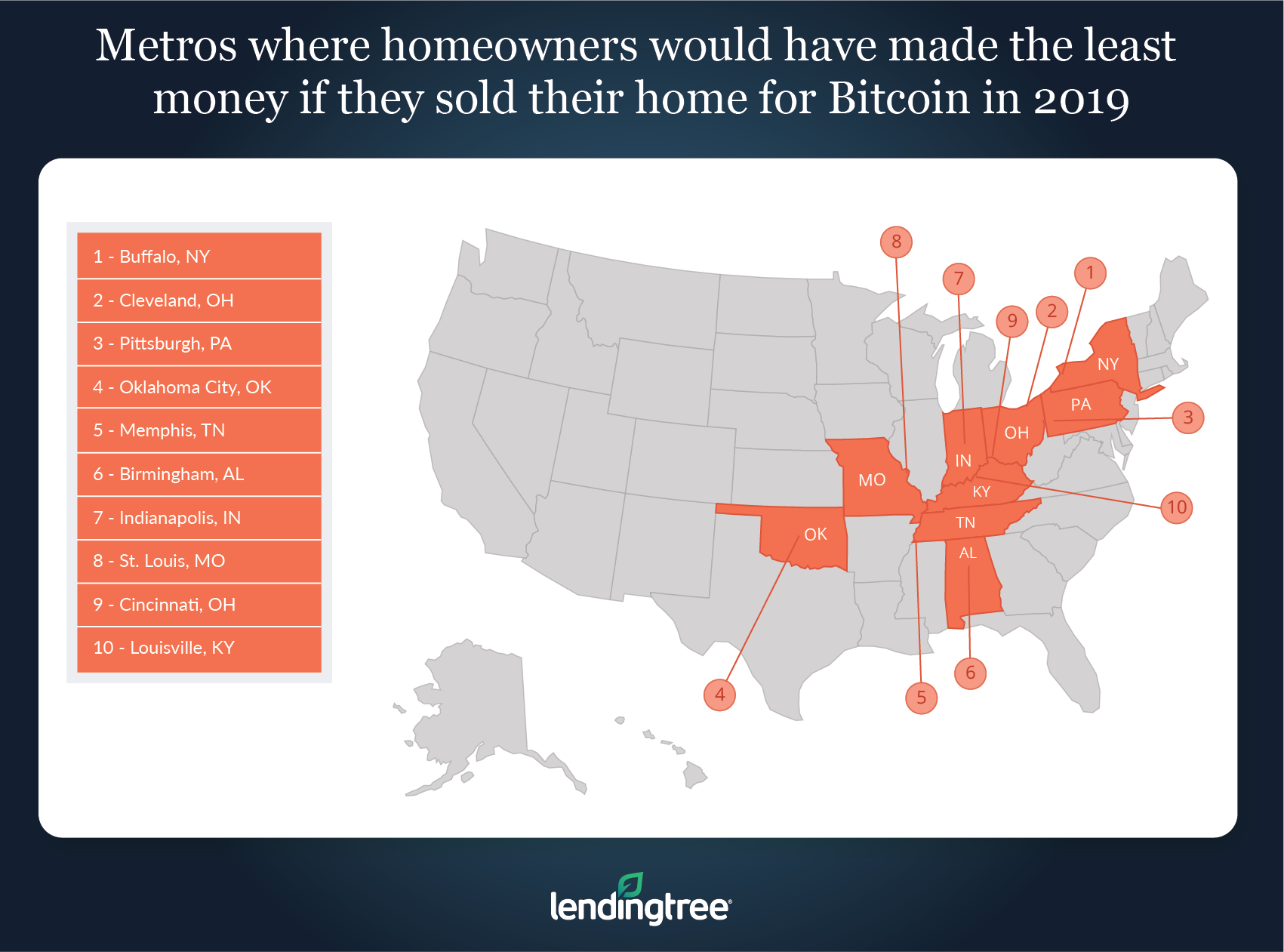 Selling your home for Bitcoin could make you a millionaire, but that doesn’t mean it’s the best choice

Given just a few short years, an investment in Bitcoin can yield considerable returns. But that doesn’t mean that most homeowners should plan on selling their houses for the cryptocurrency.

The biggest reason for this is the general lack of buyers who have the Bitcoin necessary to purchase a home. Most Americans pay for housing with U.S. dollars, meaning that even if they want to sell their home for Bitcoin, sellers are unlikely to find many buyers who are even capable — let alone willing — of engaging in such a transaction.

Another reason stems from Bitcoin’s extreme volatility. While the average closing price for a single bitcoin has topped $45,000 in 2021, the currency’s value has shifted wildly since its inception more than a decade ago. And even though Bitcoin’s value has trended up over its lifetime, there have been plenty of instances where its value has dropped dramatically in a very short period.

This volatility is especially apparent when Bitcoin is compared to a more stable asset, like housing. Even following the 2008 housing collapse, which sent the global economy into recession, the Case-Shiller national home price index showed a year-over-year decline of nearly 13%, far less than how much Bitcoin fell in May 2021. Of course, Bitcoin has since rebounded from that decline, but investing in a home is probably a safer — if potentially less lucrative — investment.

Finally, outside of price, a house provides considerably more day-to-day use to its owner than Bitcoin. After all, a person can live in their house even if its monetary value plummets, but the same isn’t true for Bitcoin.

Ultimately, if a homeowner is in a position where they don’t mind taking a significant amount of risk and can find a buyer willing to purchase their home with cryptocurrency, then selling a house for Bitcoin could pay off.

To summarize: Even if it’s technically possible to have sold a median-value home for Bitcoin in 2019 and become a millionaire by 2021 as a result, it’s not very likely. If a person did sell their house for Bitcoin, they probably wouldn’t keep all the Bitcoin they made. Instead, most homeowners would have to use some revenue to pay off their mortgage or find a new place to live. As a result, they may not hold onto enough bitcoins to make them a millionaire as the currency’s value increased. Nonetheless, those who managed to avoid spending most or any of the bitcoins that they got from the sale of their homes would likely be holding assets worth millions of dollars.

Tips for selling your home

Even if you’re not planning on selling it for Bitcoin, selling a home can be a difficult task. Here are a few tips to make the process less stressful:

Bitcoin price data comes from CoinDesk. For this study, LendingTree used daily closing prices in 2019 and 2021 (through Oct. 31) to calculate the average price of Bitcoin in 2019 and 2021.

Using those calculated figures in conjunction with Census Bureau data, we were able to determine how much Bitcoin it would take to buy a median-priced home in 2019 and how much that Bitcoin would be worth in U.S. dollars if it had been held until 2021.

Homeowners Could Have Made Millions by Selling Their Homes for Bitcoin

LendingTree used data to look at how many bitcoins it would have taken to buy a median-valued home in each of the nation’s 50 largest metros in 2019.