You are using an outdated browser. Please upgrade your browser to improve your experience.
Business Loans
How Does LendingTree Get Paid?

How Much it Costs to Start a Business in Every Industry

When opening a business, it would be beneficial to have an idea of what startup costs to expect, whether you’re familiar with the industry or a newcomer.

Using data from the Census Bureau, LendingTree researchers estimated the average startup costs for businesses in a wide range of industries. Most business owners (21%) launch their venture with less than $5,000. But initial costs could exceed $3 million, depending on industry and other startup factors. 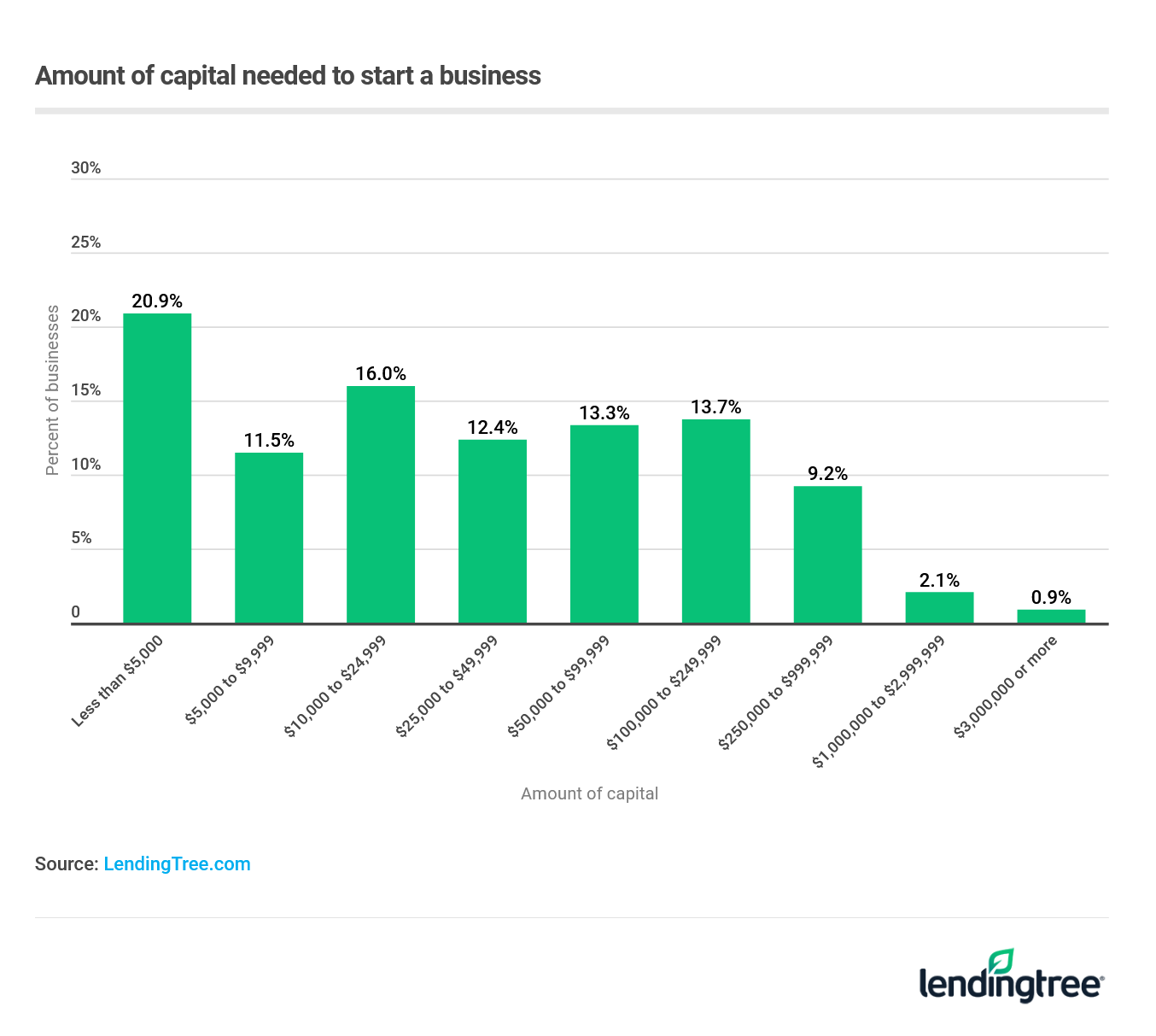 Management of companies and enterprises is the most expensive industry in which to get started. Examples of companies in the space include those that either hold securities or equity interests of another enterprise, or oversee and manage planning and decision making within another business. According to our estimates, the average business in this industry requires about $440,740 in startup funding, while the median needed $191,762.

Utilities takes second place. Not many firms reported data – there were just 1,097 utilities companies in the Census Bureau data set. Combined, they used $284 million in funding, equaling $265,676 per firm. But the median utilities firm needed $88,333 to get started.

Food and accommodation firms had the third-highest mean startup costs. This industry includes mom-and-pop diners, as well as casinos and hotels, which drive up the average. In this industry, the average new firm costs over a quarter of a million dollars to start. Roughly two-thirds of businesses in this sector required more than $50,000 in initial funding, while the median firm needed $93,621.

Construction is the least expensive industry to enter. The average new firm needs just $67,349 to get started, while 50% of firms began with less than $12,390. This was also one of the largest industries in the survey with about 300,000 reporting firms.

Average costs are also low for administrative and support and waste management and remediation services. Employment agencies, janitorial services, waste collection and travel agencies are all examples of firms that fall in this category. To start a business here, the average entrepreneur needs $69,509. Plenty start with less, as the median firm in this industry opened with $12,549 in capital.

If it still seems expensive to start a business of your own in any of these industries, there are still options if you can only afford a business loan up to $10,000. In construction, nearly 47% of firms reported using less than $10,000 in startup funding. It may be even less to start an administrative and support, waste management or remediation business: nearly 31% of these firms began with less than $5,000. 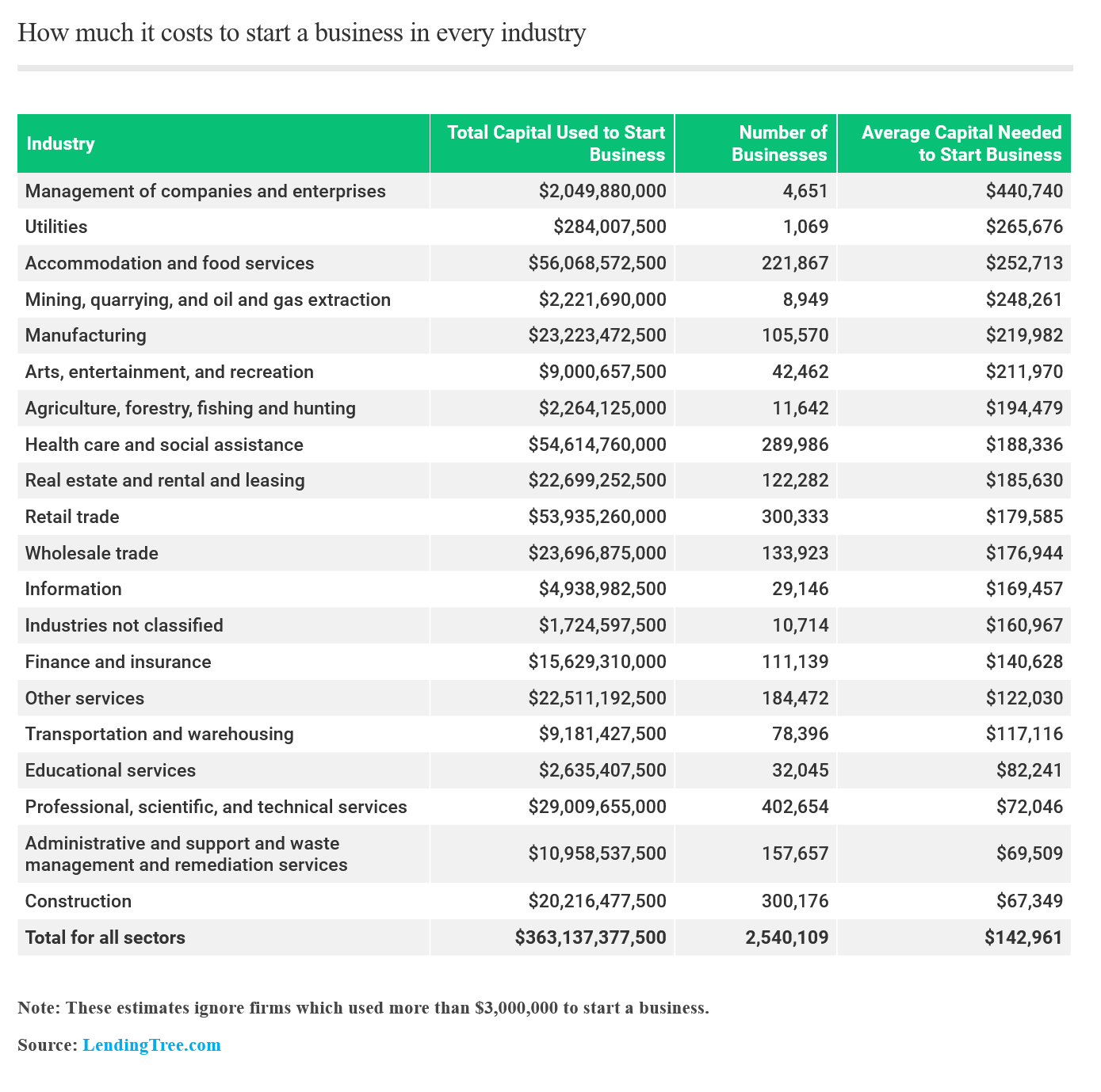 1. Management of companies and enterprises

Among the 4,651 firms that reported costs, the average amount of capital needed to start a business in this industry is $440,740. The total amount spent to start all of the reporting firms surpassed $2.05 billion.

Industry employees in this sector include accountants, bookkeepers, financial managers, office managers and general managers. They may handle financial planning or other administrative tasks for companies that prefer a third party versus in-house management.

Initial expenses may include office space, either purchased or leased, accounting or bookkeeping software, liability insurance, marketing, business licenses and various office supplies. You may be able to start a management business for less than average. The median startup cost is $191,762, although it’s the highest median price tag in our study.

On average, it costs $265,676 to open a utilities business, earning the industry a No. 2 spot in our study. However, the industry had the lowest response rate with 1,069 companies reporting costs. The amount all reporting utilities companies spent to get started totaled more than $284 million.

Electric power, natural gas, steam supply, water supply and sewage removal businesses are categorized in the utilities industry. These businesses rely on skilled experts and workers, as well as expensive machinery. Business owners may need to purchase land as well to gain access to resources like oil and natural gas. Even with the low number of respondents, the utilities industry had the third-highest median startup cost in our study at $88,333.

The No. 3 industry falls just below utilities with average startup costs of $252,713. The number of respondents totaled 221,867 firms, and those business used a combined total of more than $56 billion in startup capital.

As mentioned earlier, this sector comprises high-end hotels and restaurants and smaller businesses, such as fast-food restaurants. Luxury establishments skew the average cost, but the median cost to start a business in the accommodations and food services industry is still our second highest at $93,621.

The location itself is typically the main cost driver in this industry. In addition to the space, interior and exterior finishes and equipment, restaurant owners also spend money on marketing, inventory and staff. Additional costs for hotel owners could include recreational spaces and food and beverage options.

Best businesses for entrepreneurs on a budget

These industries have the lowest average startup costs, as well as median costs near the bottom of our list.

The construction industry has the lowest average startup costs in our study at $67,349. And though 300,176 firms reported costs, their combined startup expenses cracked just $20.2 billion. The median cost is $12,390, which is in our second-to-last spot.

Startup costs for construction businesses could include raw materials needed for projects, tools and equipment, labor, insurance, permits and licenses. Costs could be somewhat controlled, as project size and company needs would affect overall expenses.

Administrative and support and waste management and remediation services

Starting a business in this industry is slightly more expensive than starting in construction. The average amount of money needed to start a company is $69,509. The total startup costs for the 157,657 respondents amounted to $10.9 billion. The median amount of capital needed was among the lowest at $12,549.

Janitorial services, landscaping, security and groundskeeping lands in this category. These businesses tend to have minimal startup requirements. Initial expenses for a cleaning service, for instance, typically involve only supplies and labor costs.

The average amount to start a professional, scientific and technical services firm is $72,046. The median figure is the lowest in our study, at $9,952. For the 402,654 responding companies, startup costs totaled $29 billion.

This sector typically includes accountants, auditors, architects, lawyers and analysts. Office space would likely be the largest upfront expense. Lawyers, for example, should expect to put the bulk of their startup money toward office furniture and supplies, as well as professional licenses and insurance. Equipment like a computer, printer, phone, document scanner and software could also add up. 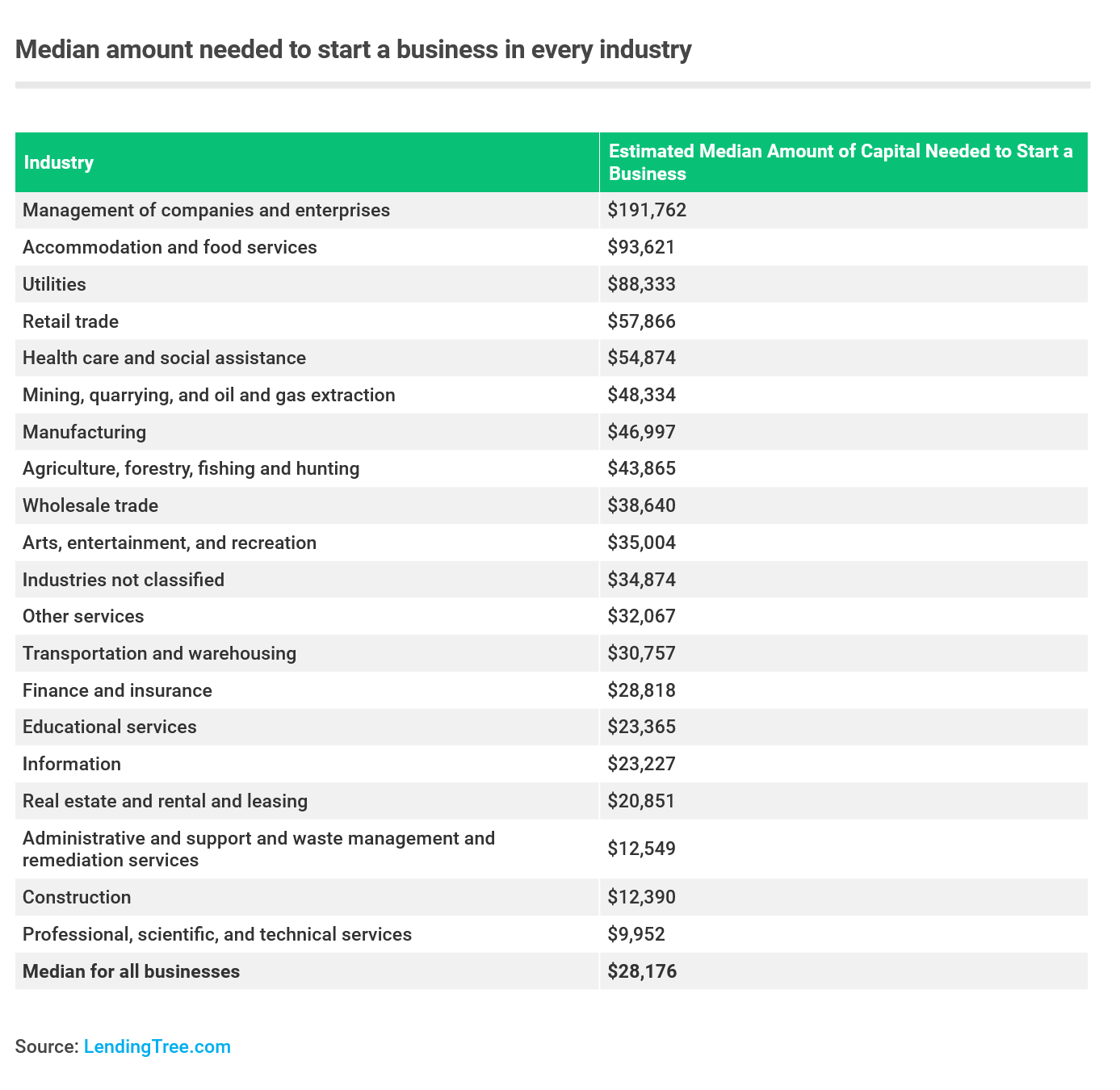 In order to estimate mean startup costs, researchers used survey data from the U.S. Census Bureau. Researchers found the total amount of capital used to start or acquire a business and divided that amount by the total number of firms that reported financial estimates. Those financial estimates were provided in ranges. To make our estimates, we assumed that businesses used the average of the range to fund their business.

For example, 295,500 firms reported using between $5,000 and $9,999 to start their business. To estimate the total capital amount used, we assumed the average firm in that range used $7,500, which is halfway between $5,000 and $9,999. Companies that reported costs of $3 million or greater were not included in the analysis because without a fixed range, we cannot make estimates.

Data comes from the U.S. Census Bureau’s 2016 Survey of Entrepreneurs.

How Much it Costs to Start a Business in Every Industry

The costs of starting a business vary dramatically by industry, but some industries have startup costs under $10,000 or even $5,000.