According to the U.S. Census Bureau, the number of Americans who moved in 2016 fell to an all-time low of just 11.2 percent. In response, President Trump said in an interview that people are going to have to consider picking up and moving if they want to find better work opportunities – and experts think he might be onto something.

While just 1 in 5 Americans are relocating to pursue a better professional opportunity, the right information could help change that perspective. To learn more, we analyzed data from the U.S. Bureau of Labor Statistics and a variety of other sources to determine which metropolitan areas have the most potential for industries ranging from manufacturing and construction to health care and food services. Curious which industries are striking gold in your area? Read on to learn more. 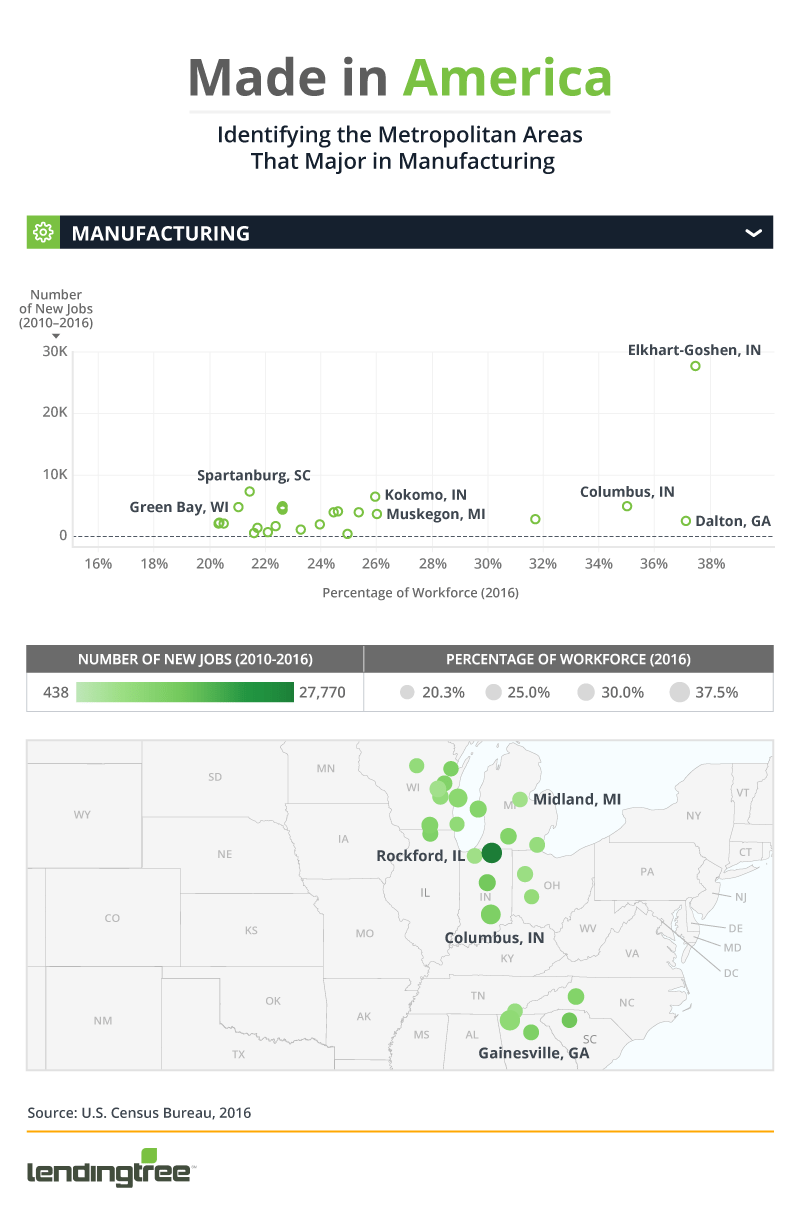 Overall, employment in the manufacturing industry has decreased in recent decades, but in recent years, there has been an uptick in jobs thanks to technology and a resurgence in American manufacturing. In 2016, manufacturing output reached an all-time high, with production being 47 percent more than 20 years prior. Automation, robotics, and the potential application of new technology (like self-driving cars) have changed the manufacturing landscape, revitalizing the possibility of future endeavors.

Want to get in on cutting-edge advancements in the manufacturing sphere outside of our top 2 picks? These other metropolitan areas we identified could help you do just that. Leading the way, Elkhart-Goshen, Indiana, has seen more than 27,000 new manufacturing jobs since 2010, accounting for over 37 percent of the workforce. While the city may have a slightly higher cost of living than the national average, it ranks as one of the best areas for job growth of any kind.

Two other American cities – Spartanburg, South Carolina, and Kokomo, Indiana, – may represent a lower percentage of the total manufacturing workforce (between 21 and 26 percent), but they have seen thousands of new jobs in manufacturing over the last six years. 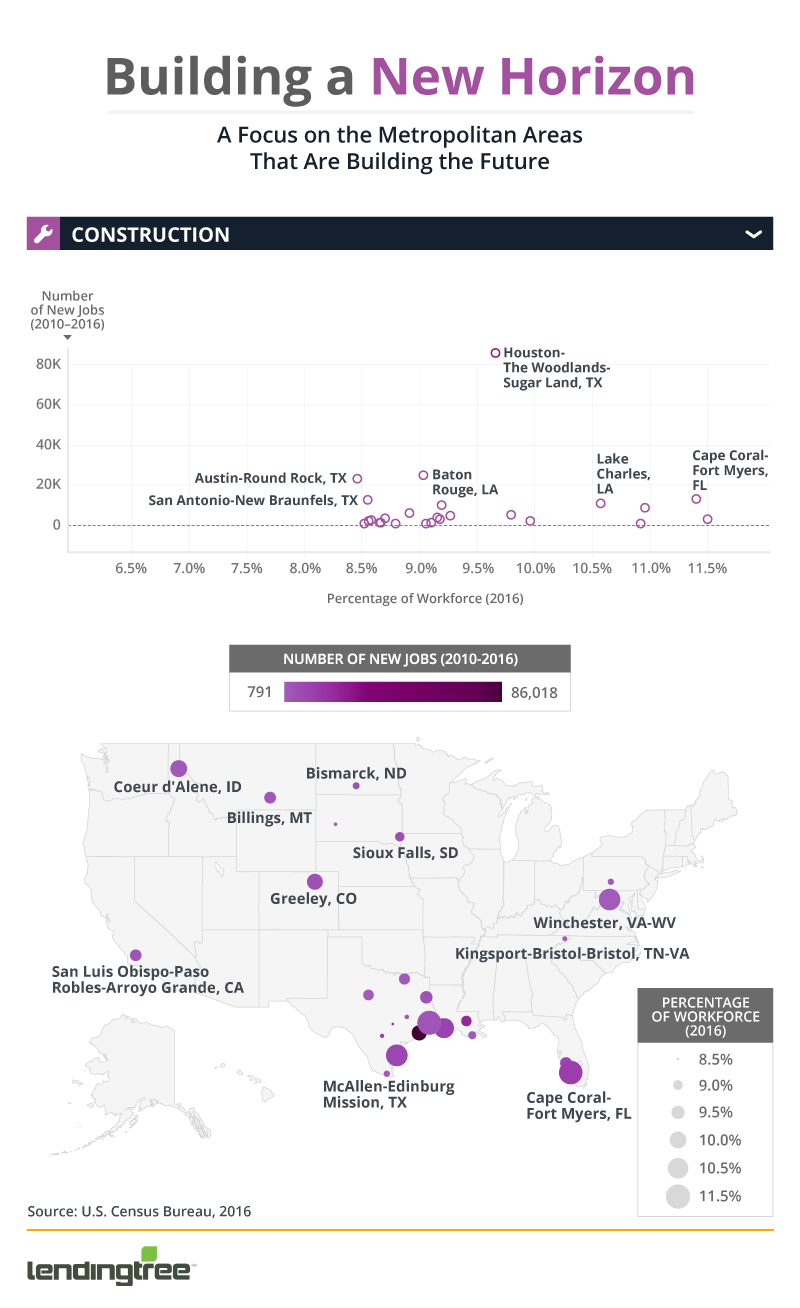 The impact of technology on construction goes far beyond automation. Including construction software designed to streamline communication between points of contact, advancements in technology have been utilized to augment reality, create more environmentally friendly processes and attract new workforce demographics.

Given the recent changes to the industry, some metropolitan areas have seen dramatic growth in construction employment since 2006 compared to our top two cities. Based on our analysis, Houston, Texas, has added more than 86,000 construction jobs since 2006, over 60,000 more positions than any other city in the U.S. The cost of living in Houston may be high, but with a median household income of over $85,600 a year and sustained job growth over time, construction jobs in the Southern heart of Texas could be worth the relocation.

Other Southern and Southeastern cities like Austin, Texas, Baton Rouge, Louisiana, and Fort Myers, Florida, also made our list for cities accounting for the largest workforce percentage and highest job growth since 2010. 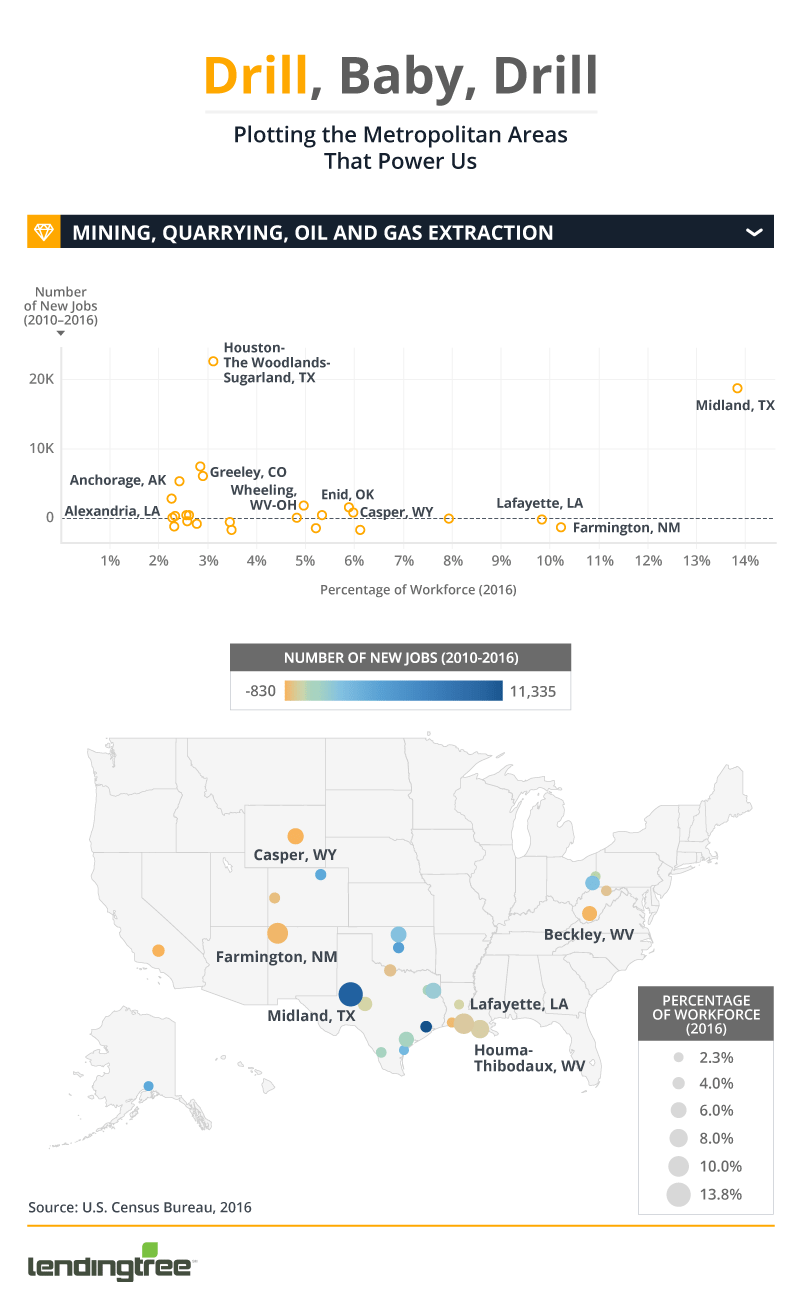 Since September 2014, the mining industry in America has lost 191,000 jobs, including 7,000 that disappeared in April 2016. Still, mining employment peaked in 2014, accounting for more than 852,500 jobs in total. As the industry levels off, certain metropolitan areas may offer the best opportunities for Americans looking to make it in mining.

In general, the best growth in gas extraction, quarrying oil and mining is in Southern cities located near the Gulf of Mexico. With 11,335 new jobs in the Houston area alone, several Texas cities including Midland, Corpus Christi and Longview account for some of the highest growth and the largest concentration of miners. In only one Texas city, Wichita Falls, was there a regression in the number of mining and oil extraction jobs across the state.

Other cities outside of Texas that saw a significant increase in the number of mining jobs since 2010 included Oklahoma City, Oklahoma, Greeley, Colorado, and Anchorage, Alaska.

An industry in motion 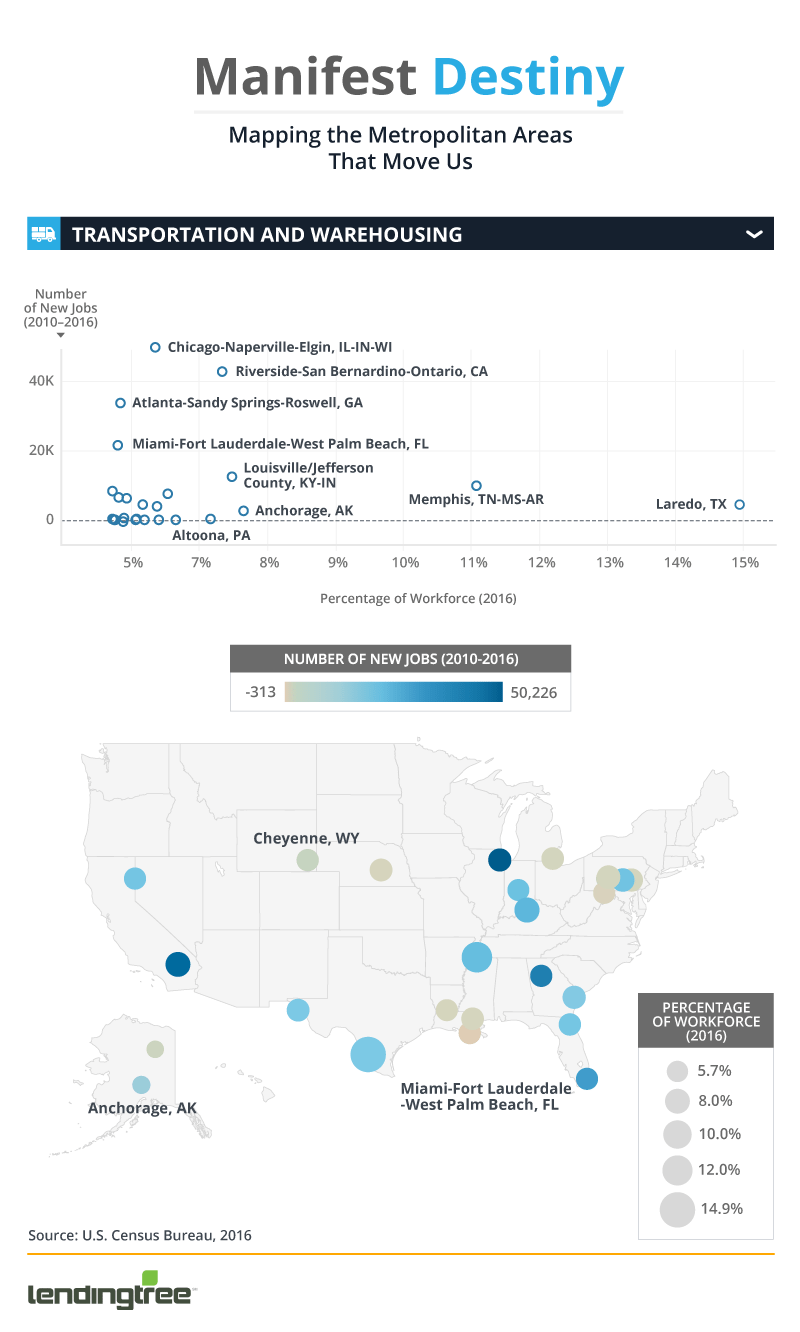 As with nearly everything in the U.S., technology is changing the face of the transportation industry. Self-driving cars have been plucked from science fiction stories and are now being tested and “driven” on the roads today. Even automated production will help eliminate additional costs for domestic manufacturing, helping to close the gap between products produced overseas and shipped to the U.S. and those produced entirely in America. Political reform could also help boost the number of transportation jobs in coming years.

From the Northeast to the West Coast, there are other metropolitan areas worth considering if you’re looking for the best opportunities in the transportation and warehousing industry. Leading the way with over 50,200 new jobs since 2010 and accounting for more than 6 percent of the total workforce, Chicago, Illinois, ranked as one of the top cities for growth in this field. As a major metropolitan city, the cost of living in Chicago is only 8 percent over the national average.

Like Chicago, the Riverside-San Bernardino, California, area has also added more than 43,000 jobs to the transportation and warehousing industry, followed by Atlanta, Georgia, and Miami, Florida.

Putting bread on the table 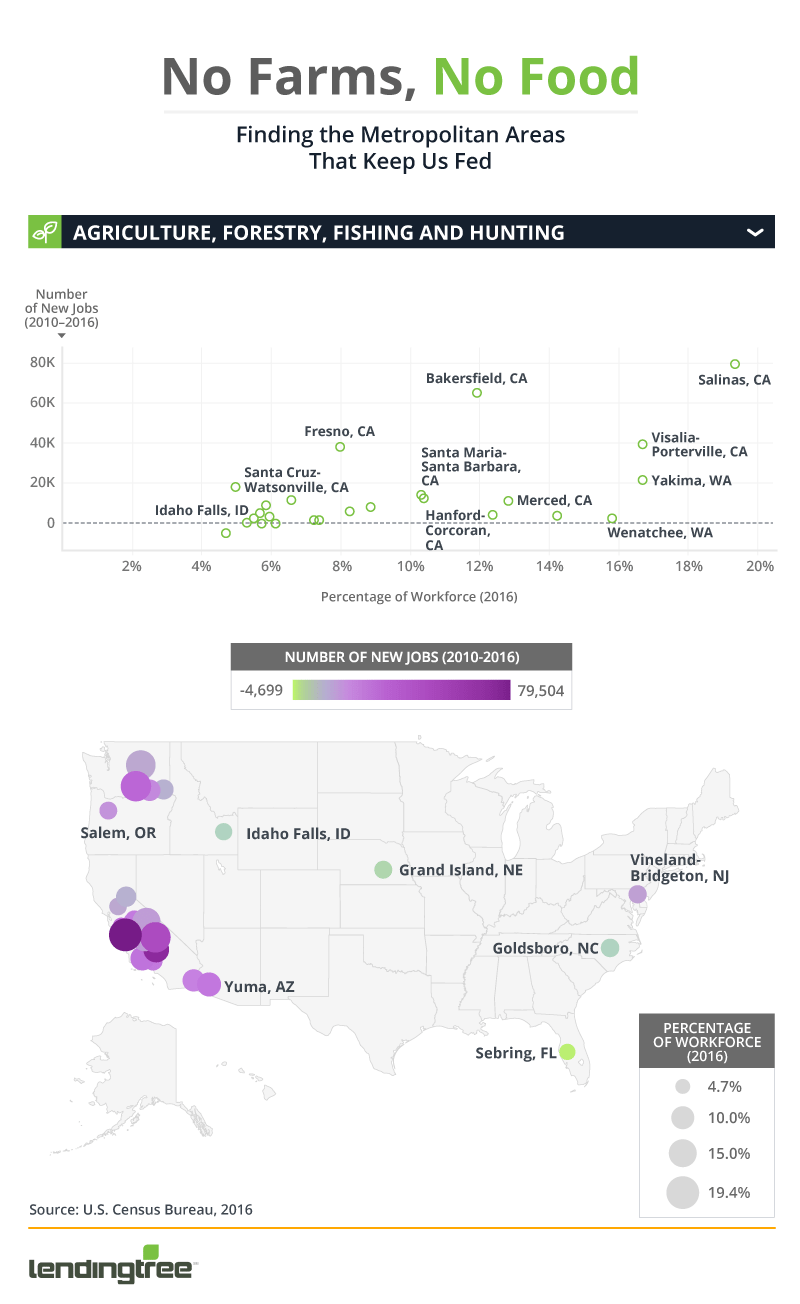 Technology, better access to data and information and biological advancements to fend off weeds and pests are all playing a role in the evolution of the agriculture industry, but perhaps none is as relevant as the role demand will play in the potential for job growth. As the world population grows, the demand for increased food supply and the need for advancements in the agricultural industry could be the biggest factors changing the economy.

For new growth in a classic industry, one state stands out among the rest as leading the way in agriculture, forestry, fishing and hunting: California. With multiple cities contributing thousands of new jobs since 2010, the Golden State could be among the most ideal locations for Americans looking to advance their careers in this field.

In Salinas, California, just 59 miles outside of San Jose and Silicon Valley, over 79,500 new jobs since 2010 account for over 19 percent of the total industry. Farther south, Bakersfield, California, added over 65,000 new agriculture jobs to the U.S. economy, while Visalia-Porterville and Fresno, California, added between 38,000 and 39,000 new jobs each. 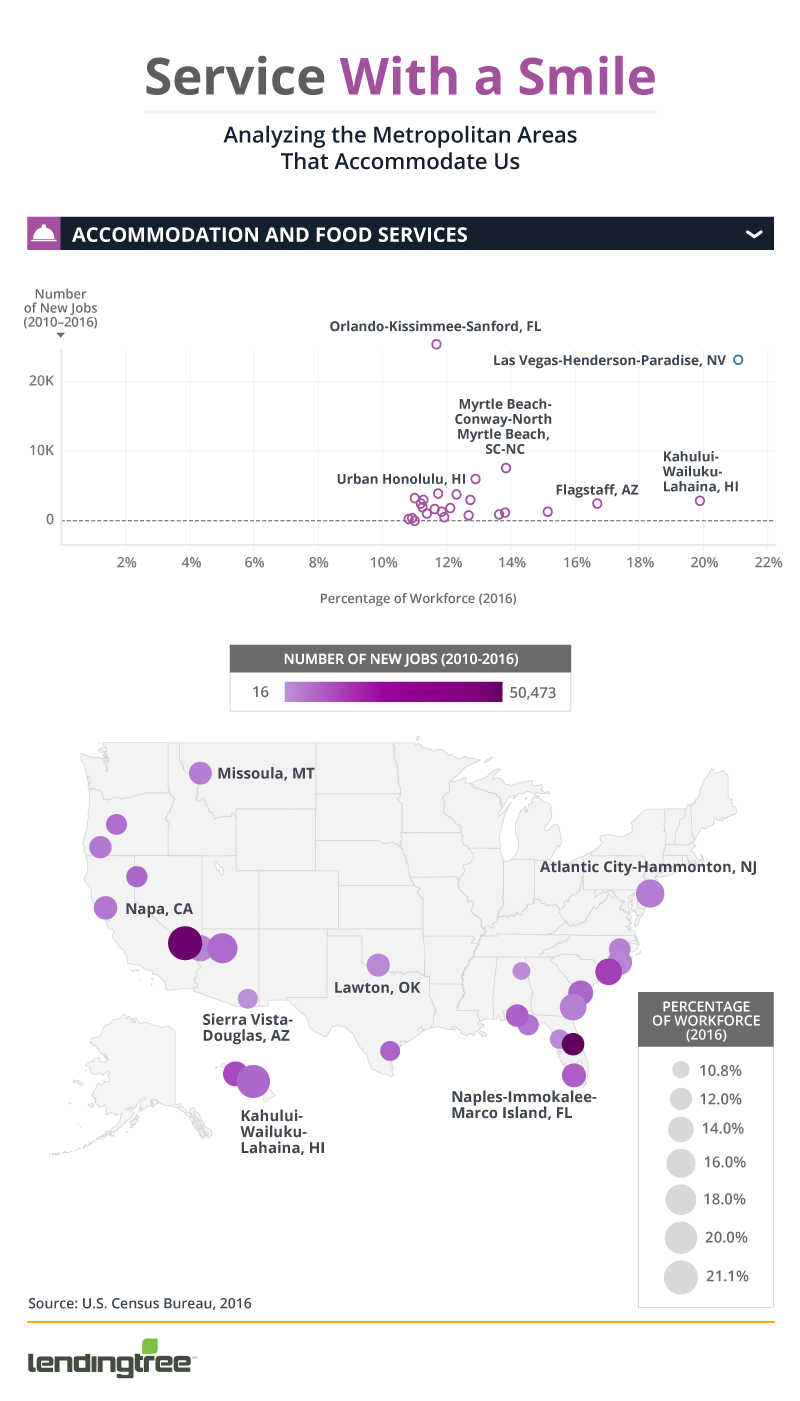 In 2017, Americans spent more money eating out than on groceries and home-cooked meals for the first time in history. Perhaps more importantly, travel to some of the top tourist destinations in the country also hit record highs in 2016 and is expected to continue growing in the future.

If you’re looking to capitalize on trends in tourism and vacation, Orlando, Florida, and the surrounding areas should be at the top of your mind if you’re interested in accommodation and food services. As home to theme park giants like Walt Disney World and Universal Orlando, the metropolitan area has added over 50,400 jobs to the U.S. economy since 2010. In 2017, Forbes marked Orlando as the second fastest growing city in America.

Following Orlando, other popular travel destinations in the U.S. – including Las Vegas, Nevada, Myrtle Beach, South Carolina, and Honolulu, Hawaii – ranked among the highest contributors to the accommodation and food service industry, adding over a combined 73,000 jobs to the workforce since 2010. 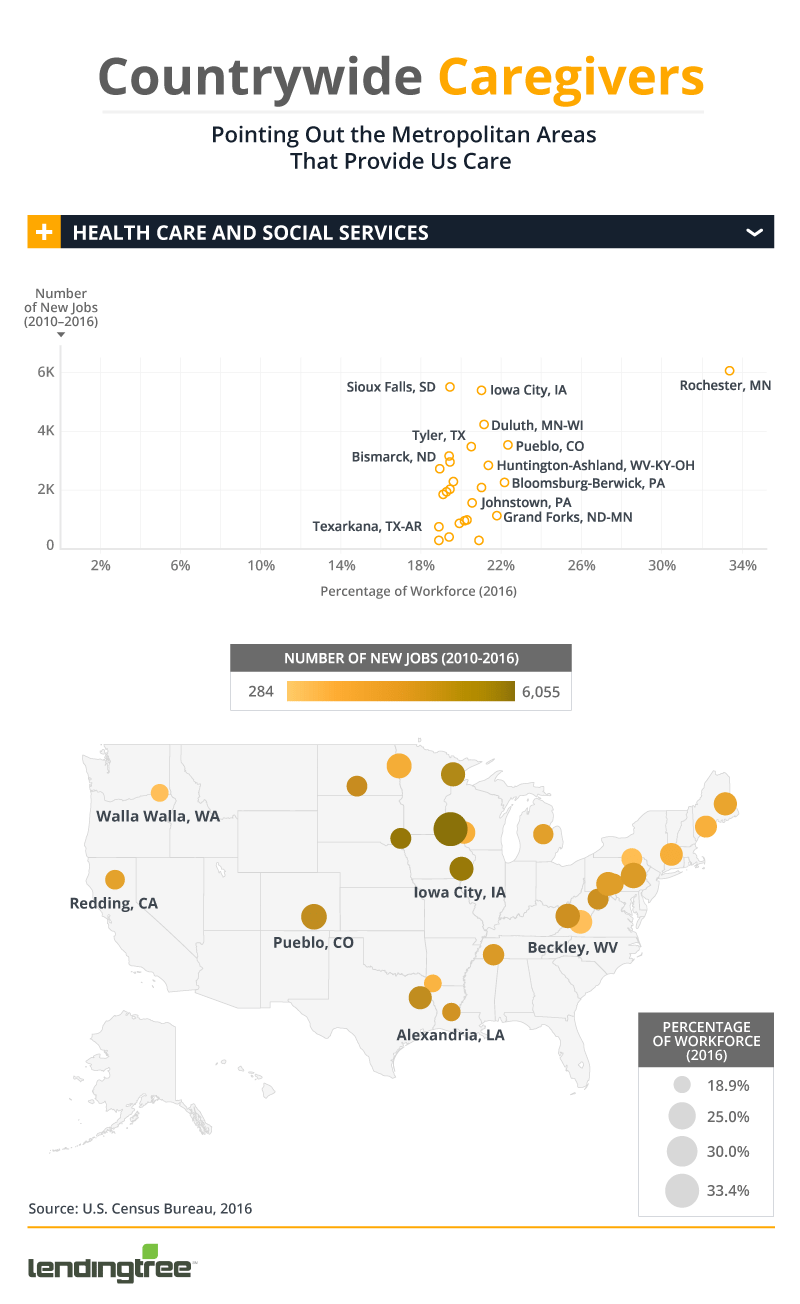 As with every other industry, health care is not outside the reach of advancements in technology. However, shifting political appropriations and potential changes in federal legislation, combined with the regularly rising costs of health care, could be playing an even more significant role in the lives of working Americans.

For men and women looking for job opportunities in the health care and social services industry, the strongest growth was found in metropolitan areas all across the U.S. With an increase of over 6,000 new jobs since 2010 and comprising more than 33 percent of the total workforce, Rochester, Minnesota, ranked as one of the best cities for work in this field. The cost of living in Rochester is 2 percent below the national average, but job growth is on the rise and expected to continue growing. With institutions like the Mayo Clinic employing thousands of Americans in the region, Rochester isn’t just a place for growth in the health care sector –it’s an opportunity for professional stability.

Across the U.S., an ever-changing economy and new technology are changing the landscape of some of the country’s oldest industries. While the overall employment for some of these industries may have declined in recent years, certain cities and states are still seeing growth and adding new job opportunities to the workforce. As our interactive guide reveals, there are key spots around the nation for people working in anything from retail to arts and entertainment and educational services. And even a few that might be worth considering for a future home.

We collected data on 17 industries from five sources: U.S. Census Bureau American Community Survey, Bureau of Economic Analysis, Taxfoundation.org, National Conference of State Legislatures, and U.S. Census Bureau Quarterly Workforce Indicator for the most recent data on 11 factors. The variables and their respective source are listed below:

*This was calculated by applying the corresponding tax bracket to the median earnings by industry. In some cases, states had a flat tax rate or no income tax rate.

The variables were then weighted. Each location received a score on a scale of 0 to 100, with 100 being a perfect score, and 0 being the absolute lowest possible score. The value of each variable was determined by the weights. The weights applied to each variable can be found here.

In three industries, median earnings data were not available for some metropolitan statistical areas. A list of those areas and their respective industries can be found here.