The housing market has boomed throughout the coronavirus crisis. Millions of houses have been bought and sold, and home prices have skyrocketed across much of the U.S. Based on how energetic the housing market has been, it’s clear many Americans have relocation on their minds — even in the face of the COVID-19 pandemic.

But where are movers likely to go? Are they staying in their state or venturing somewhere new? To answer these questions, we looked at data derived from LendingTree users who requested a mortgage loan from March 1, 2020, through Sept. 21, 2021. This allowed us to analyze the pandemic moving patterns of homebuyers in each of the nation’s 50 states.

While most movers look to stay in their current state, a significant share look to move elsewhere. And some states are much more popular destinations than others.

States with the most movers looking to stay in state 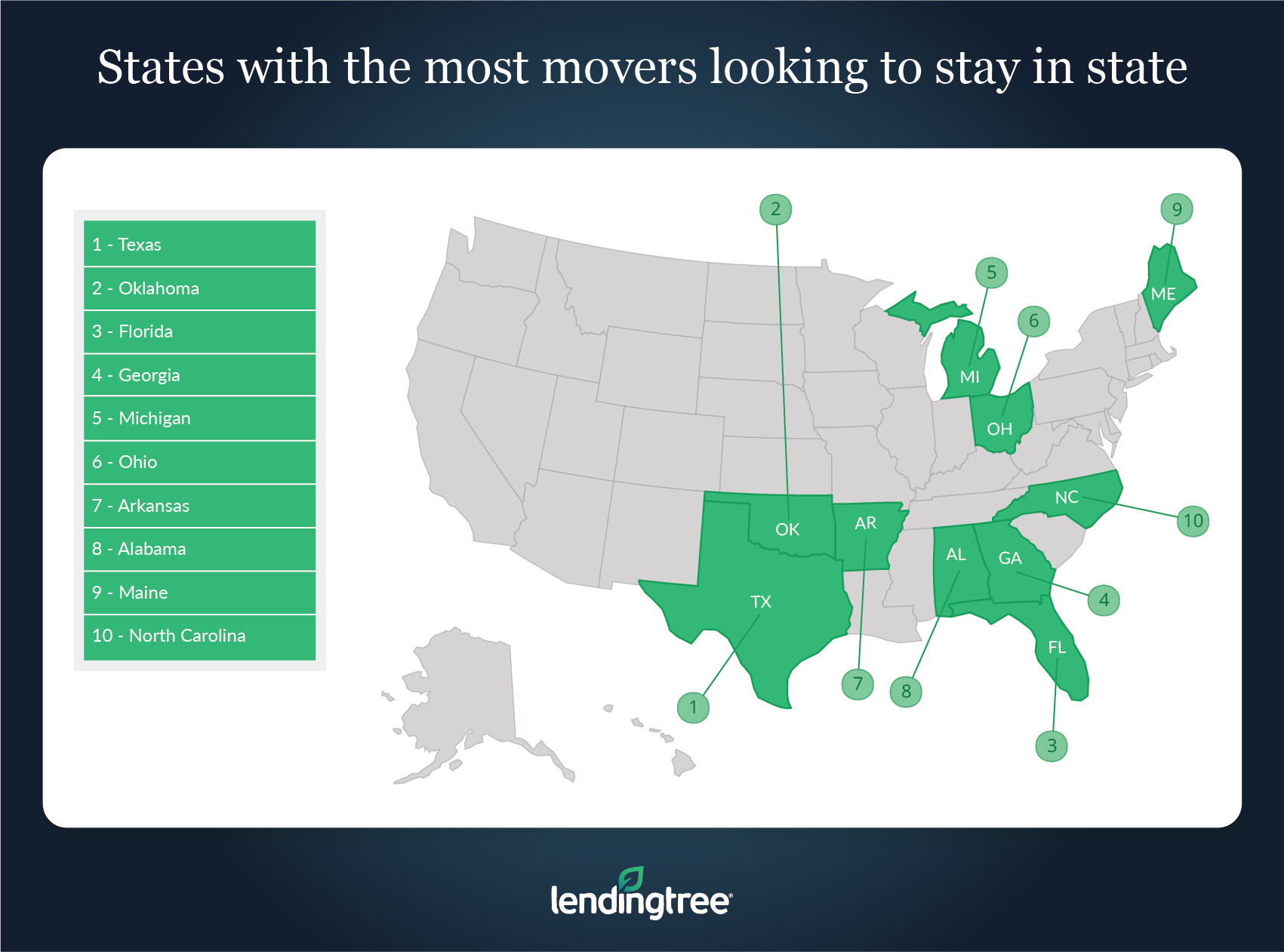 States with the most movers looking to head out of state 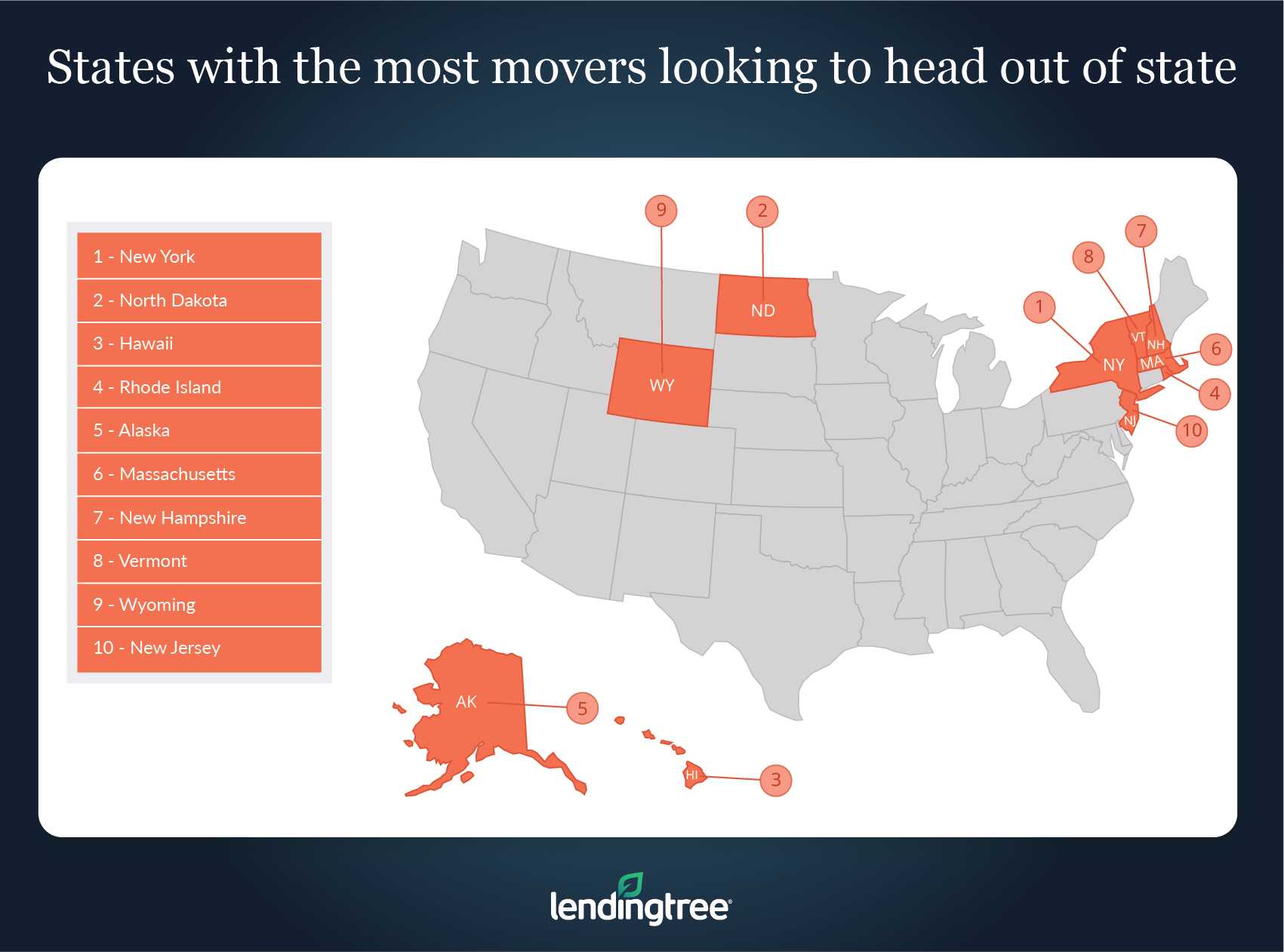 People have moved throughout the pandemic, but most haven’t gone too far

With the rise of remote work, it may seem as though Americans have more freedom to buy a home wherever they choose — even if that place happens to be far from where they live and work.

And while some certainly have decided to pack their bags and head for greener pastures, the data indicates that most movers stay close. As mentioned above, an average of just more than 85% of movers look for a home in their current state. Similarly, a December 2020 LendingTree study found that about 84% of movers in the nation’s 50 largest cities stayed in the city in which they were living.

People may want to avoid a long-distance move for a variety of reasons:  Here are just a few:

Ultimately, even for those who have been inclined to move during the pandemic, certain drawbacks and limitations — both socially and financially — are likely to keep most movers near where they currently reside.

3 tips for homeowners considering a move

Even considering short distances, moving can be a challenge. As a result, those looking to move should keep the following tips in mind to help make the process less of a hassle.

No. 1: Learn about a new market before deciding to move into it

Different housing markets have different quirks, so try to get acquainted with the area before buying a home there. Compare home prices in similar neighborhoods to get a better idea of how much money a house is likely to cost in a given area, as well as which homes might be overpriced or underpriced.

The combination of costs related to moving expenses, selling a house and buying a new one can add up quickly — and easily drain a person’s bank account. As a result, movers should keep a careful eye on their savings to ensure they have enough money to move.

No. 3: Consider other options

Depending on why a person is thinking about moving, there may be ways to accomplish their goals without packing their bags. For example, those thinking about moving to lower their monthly housing costs might instead consider refinancing their loan. Or those who want a house with more updated amenities may be able to use a home equity loan to get those amenities in their current home.

Data for this study is derived from users on the LendingTree platform who made a mortgage purchase request from March 1, 2020, through Sept. 21, 2021.