Spending Within Their Means: Some Cities Do It Better Than Others

At a time when 40% of U.S. adults are struggling to make ends meet, the urge to live beyond your means can be hard to resist. After all, there are plenty of products, especially credit cards, that can make it dangerously easy to do so. Using different types of credit behavior as a measuring stick, LendingTree sought to find out where consumers are spending beyond the means across the U.S.

In this study, the LendingTree team combined anonymized credit data from LendingTree   users with the latest U.S. Census Bureau data on average household income to rank the top 50 metropolitan areas based on how successfully residents are spending within their means.

We looked at the average number of credit inquiries, use of revolving credit, non-housing debt balances as a percentage of income and mortgage balances (also as a percentage of income). Then we combined these factors to create a “Spending Within Your Means Score” of 0 to 100, with a higher score for places where residents are more likely to be living within their means.

Where residents are most likely to spend within their means 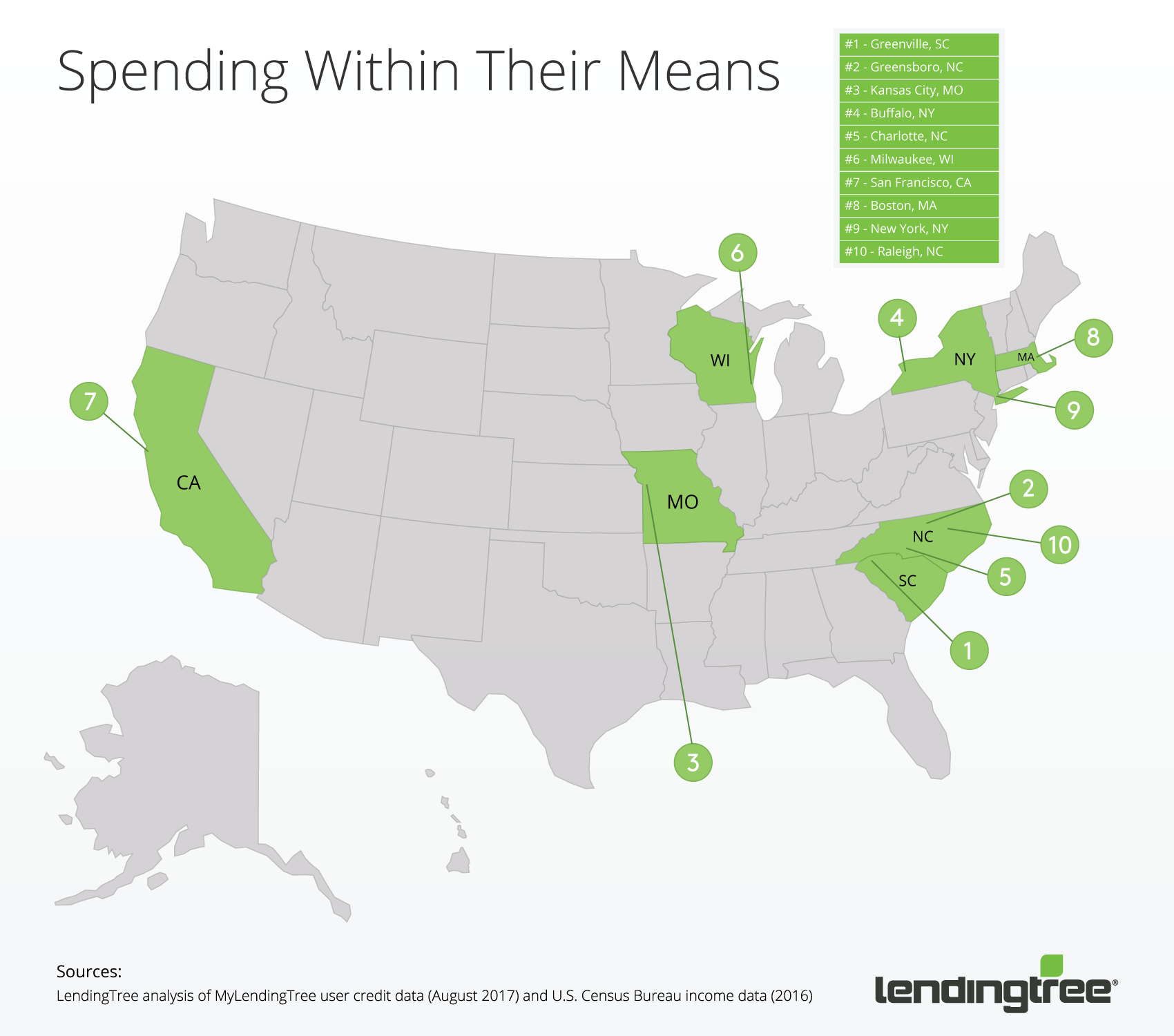 Greenville residents don’t just live within their means, they do it with the second-lowest average income among the 50 cities ranked, at just $65,602 per household. Despite this, Greenville residents have the lowest use of revolving credit lines among the cities studied (27.6 percent versus the 50 metro average of 29.8 percent), relatively low housing debt balances (62 percent of income versus the 79 percent average of the 50 metros), and non-housing debt balances as a percentage of income that are near the national average (47.3 percent vs 44.1 percent). The average Greenville resident has $21,199 in installment loan balances (including auto, student and personal loans), among the lowest of the 50 metros.

Despite being hours away from Greenville, Greensboro residents have an almost identical profile when it comes to living within their means. Both Greenville and Greensboro benefit from low housing costs, while enjoying investment from large corporations providing jobs for skilled workers.

Greensboro households earn about the same on average ($64,797 per year to Greenville residents’ $65,602), and both have residents with relatively few credit inquiries — less than four on average in the last two years. Their biggest difference lies in how much revolving credit they use.

While Kansas City residents seek credit more often than their counterparts in most metros (5.9 inquiries in the last two years on average, versus 5.0 for the 50 metros ranked), residents there have lower balances of both housing and non-housing debt versus their income than the 50-metro average. Incomes are higher than in Greenville and Greensboro, at $79,986 per household, and non-housing debt is less of a burden, with balances 42.8 percent of income. Kansas City residents are shouldering more housing debt than No. 1 and No. 2 Greenville and Greensboro, at 65 percent of income, but that’s still well below the 50-metro average of 79.3 percent.

Where residents are spending beyond their means 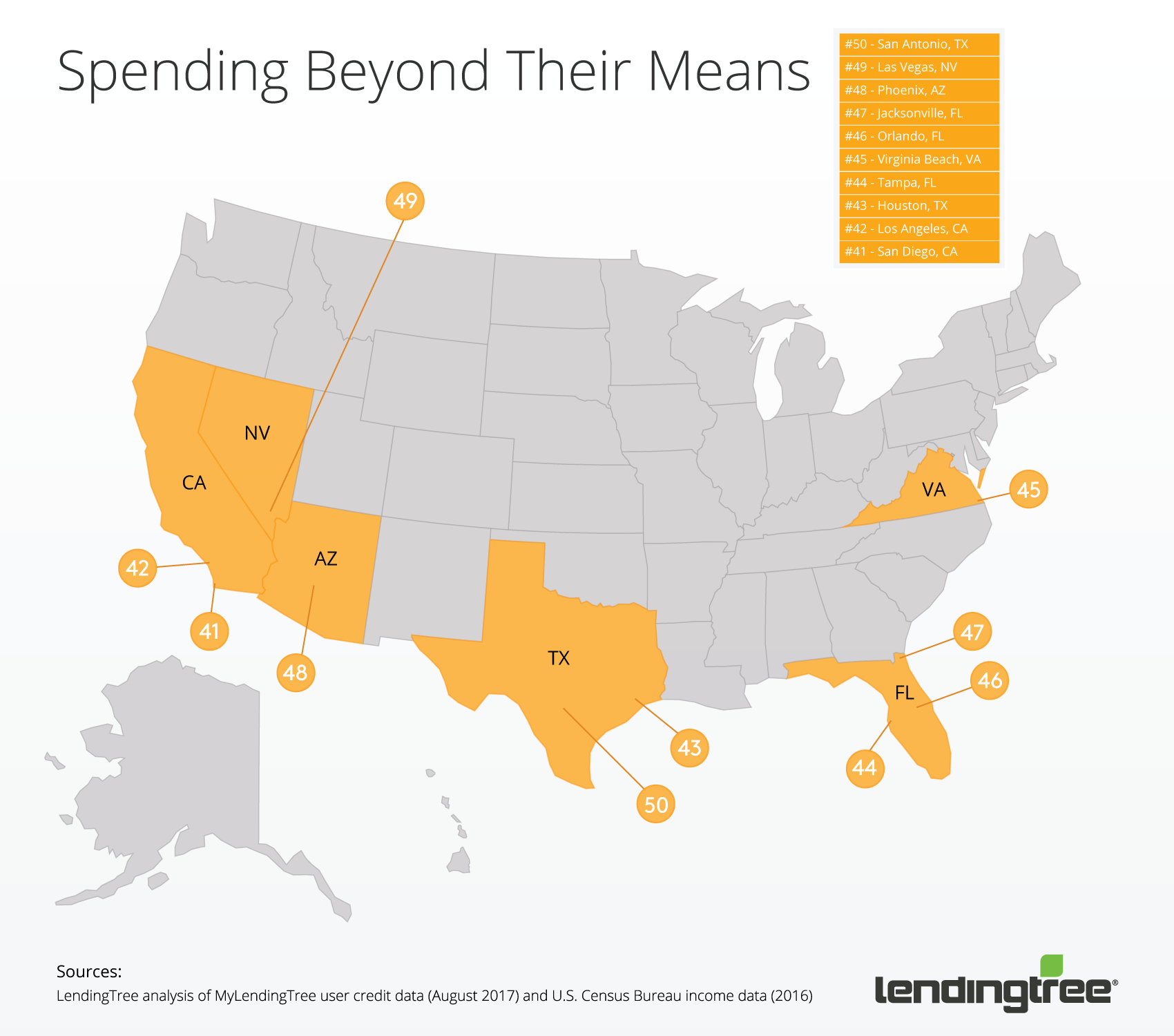 San Antonio residents love credit. A combination of lots of credit inquiries, relatively high utilization of revolving credit, and high non-housing debt balances compared to income put them at the bottom of the rankings for cities living within their means.

San Antonio residents have non-housing debt balances that represent 55 percent of their annual income, the highest of the 50 metros analyzed. Big loans for cars and trucks could be a factor, with San Antonio residents having an average balance of $30,599 in installment loans, the highest of the metros analyzed and 26 percent above the average. With household income averaging a bit less than $76,000 a year, San Antonio ranks No. 34 of 50 metros, giving residents less cushion to handle big loans.

Casino-hopping tourists aren’t the only ones taking financial risks in Las Vegas: Local residents are clearly stretching further than most with their finances. They score in the bottom 20 metros of metros for non-housing debt balances (50.6 percent of income), mortgage balance burdens (97 percent of income), and utilization of revolving credit lines.

While installment loan balances of $23,650 on average are about on par with the average of the 50 metros analyzed, Las Vegas incomes are in the bottom tier of the metros, at $70,401 per household, making the overall debt burden higher.

Like Las Vegas, Phoenix is still recovering from the housing bust of the late 2000s, and residents are stretched. Mortgage balances of 103 percent of income are comparable to those in many Western cities, like San Diego and Los Angeles, but well above the 50-metro average of 79 percent. Where Phoenix residents stretch further than even mortgage-burdened Western peers is in non-housing debt, with balances accounting for nearly 50 percent of household income of $80,235.

While California is notorious for high housing prices, that alone isn’t a driver of residents living beyond their means.

For example, the San Francisco Bay Area ranks a healthy No. 7 out of 50 metros for residents living within their means, compared with nearby Sacramento at No. 40 and San Diego and Los Angeles at 41 and 42, respectively.

While San Francisco residents have to contend with notoriously high house prices, they also have the higher incomes to handle them, at over $126,000 a year on average, the highest of the 50 largest metros.

Residents are less likely to stretch by borrowing with credit cards, auto loans and other non-housing debt, with balances just 28 percent of annual income.

By comparison, Sacramento residents have non-housing debt balances that represent nearly 39 percent of annual income, while mortgage burdens are similar to those of San Francisco Bay Area residents, at 103 percent of income, despite significantly lower housing prices. The difference is in pay, with Sacramento households earning $87,383 on average, about 30 percent below Bay Area households.

LendingTree used a statistically relevant sampling (over 1,000,000) of anonymized LendingTree user data in August of this year, along with Census Bureau data on average household income and population for the 50 largest metropolitan areas in the U.S.

The ranking used three metrics to score each metro:

Number of credit inquiries in the last two years (20 percent): A hard credit inquiry is reported on a consumer credit report when a consumer applies for a credit product or seeks specific rate quotes for some products. This is a measure that shows which metros have residents more actively seeking new credit, which could be a sign of households stretching beyond what their income can support.

Revolving credit utilization (20 percent): This is current outstanding balances as a percentage of available credit lines, typically on credit cards.

Debt balances versus household income (mortgage and non-housing, 30 percent each): This gives a measure of how stretched overall residents are with debt. While mortgage debt penalizes homeowners versus renters, we looked separately at non-housing debt. Cities that rank high on both non-housing and mortgage debt as a percentage of income are more stretched than those who rank high on just one metric.

Each metro was assigned a percentile ranking among the 50 metros analyzed for each of the three metrics, and the three metrics were equally weighted to create a “Living Within Your Means Score” of 0 to 100.