Most cardholders see their credit score fall when they open or close a credit card, but a new LendingTree analysis of several thousand anonymized credit reports shows that this doesn’t have to be the case. Cardholders may have far more control over the direction and magnitude of these moves than they realize.

To answer the question of what happens to your credit score when you open or close an account, analysts reviewed credit reports one month before and one month after a single credit card was opened by 1,785 anonymized LendingTree users, as well as reports of 2,412 users who closed a single card. (The cards were opened or closed in the second quarter of 2021, and those who opened or closed multiple cards during that period weren’t included in the analysis. People who didn’t have a credit score before opening their card were also excluded.) Researchers then compared the VantageScore credit scores for those consumers to see how they changed.

What LendingTree found was that cardholders’ actions mattered a lot. While credit scores only move by a handful of points on average when a card is opened or closed, larger, more extreme moves in either direction do happen — and the magnitude and direction of those moves appear to be significantly influenced by what consumers do with those cards immediately after opening them or shortly before or after closing them.

The impact of opening or closing a credit card

It’s one of the most common questions I’ve been asked in more than a decade of talking about credit cards for a living: How does closing or opening a card affect my credit?

The short answer is that it depends. Whether you’re talking about VantageScores (which were used in this report and can be tracked regularly through the LendingTree app) or FICO Scores, credit scores are incredibly complex, nuanced tools with myriad factors helping to determine how they move. These factors include the length of your credit history, the total number of loans you’ve taken out over time and how many different types of credit you’ve had, whether your balances and utilization are trending higher or lower and many, many more.

VantageScore and FICO formulas generally emphasize the same actions and traits, though they weigh them somewhat differently. For example, VantageScore’s formula states that your total credit usage — your balance compared to your available credit — is the most important piece of the formula, while FICO says your payment history is. 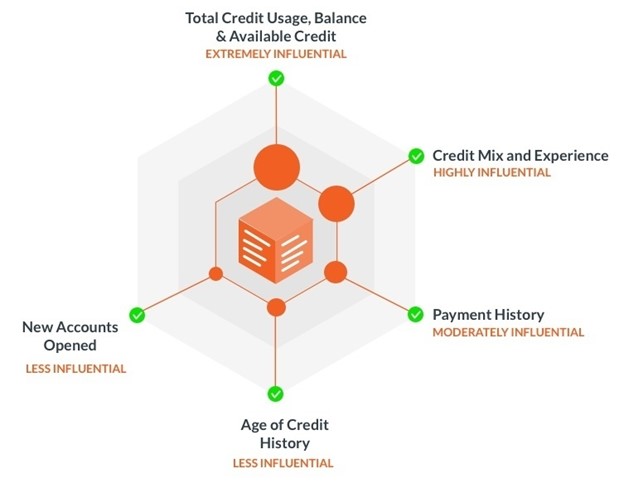 While it may be impossible to predict the exact impact of a card opening or closure on a specific individual, data can help people better understand what they might expect. That was the goal of this report.

But wait, didn’t we just say that most people see their credit score fall when they close their card? (Yes.) Then, how can the average score go up at the same time?

The answer is that while slightly more people see their scores fall (52% down versus 49% up), the average score increase is significantly larger than the average decrease. As a result, we get this statistical quirk in which most people see decreases but the average movement is up.

The chart below lays this out. A deeper dive into the data indicates that the shifts can be dramatic — in either direction. 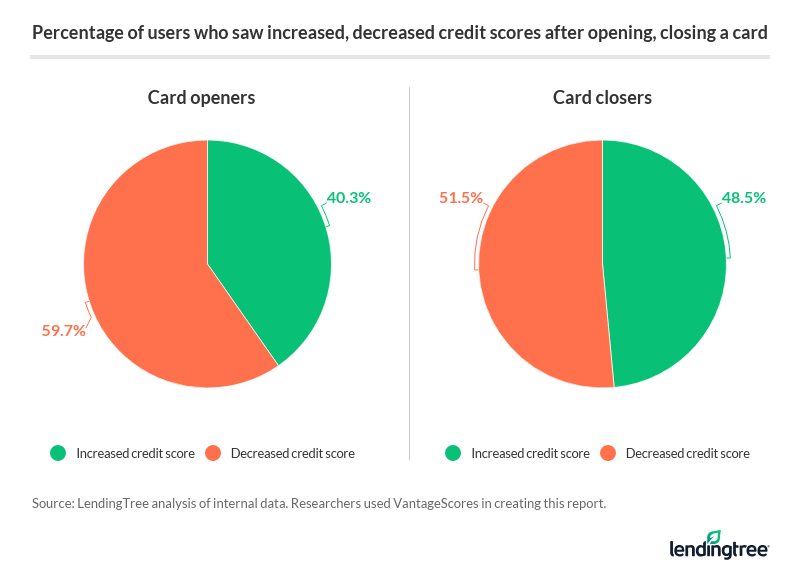 So why the big variation? One likely reason is that we all have very different credit histories, and those differences play a big role in how an individual move impacts a score.

For example, a person with five credit cards, a mortgage, a car loan and a spotless 20-year history of making payments may not see their score change much after closing one card or opening another. That’s because there are already decades worth of other data points being factored into their score.  But if someone closes their only credit card or opens a new one for the first time, the shift could end up being more significant because their history is so thin.

Still, these movements aren’t only impacted by your distant past. Our data clearly indicates that what you do just before or after closing or opening that card has a huge impact as well.

Your balance matters a lot

Credit cards don’t get closed or opened in a vacuum — there are as many reasons for those openings and closures as there are cards. Those reasons tend to dictate the actions taken after those cards are opened or closed, and those actions appear to have a huge impact on what our credit scores end up looking like in the months after the openings and closures.

One example of when you might open a new card and lower your balance: a balance transfer. You may sign up for a zero-interest balance transfer credit card, do the transfer and then proceed to pay down your debt without any new spending. 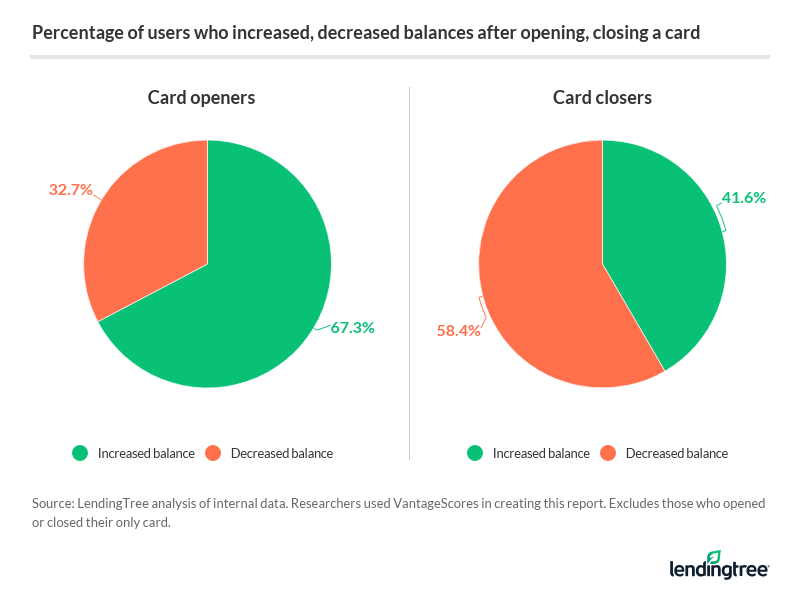 Two-thirds of people who open a credit card increase their overall balance within a month of getting that card. Not surprising: People don’t generally get credit cards to stick them in a desk immediately. However, more than 4 in 10 people who close a credit card increase their balance on their other credit cards in that first month, leaving them with fewer cards but a higher overall balance. (It’s important to note that this report didn’t distinguish between voluntary and involuntary closures. It’s possible that some of the folks who increased their balance after a card closure might have had that card closed by their issuer, which has happened frequently since the beginning of the coronavirus pandemic.)

That’s troubling and has major ramifications when it comes to another critical aspect of credit scoring.

Utilization rates matter a lot, too

When opening and closing a card, often the biggest immediate impact of the move is on your utilization rate. If you owe $1,000 and have $5,000 in available credit, your utilization rate is 20%, which most any credit expert would tell you is an OK rate (though the goal should also be to keep that rate at zero).

If you open a new card with a $5,000 credit limit, suddenly the equation changes. Your total available credit jumps to $10,000 and your utilization drops to just 10%.

Close a card, and the shift can be more dramatic. If that closed card reduces your total available credit to just $2,000, your utilization rate is a suddenly unacceptably high 50% and your credit score is likely to suffer.

Those are significant changes, just from the act of closing or opening the card. However, the LendingTree data analysis again indicated that what people do afterward can have a major effect on how big those changes are.

Just over half (51%) of those who open a new card increase their utilization rate, resulting in an average 19-point drop in their VantageScore. Among the other 49%, the average score increased by 7 points.

Again, these different scenarios can arise because of people’s actions. For example, if someone gets a new credit card and immediately goes spending, that higher balance can override any benefit of the extra available credit. Or if someone closes a credit card but simultaneously pays off a significant part of their current balance, the positive impact of the debt reduction can make the negative of the reduced available credit less important.

6 things to know about opening or closing a credit card

The decision to open or close a credit card isn’t always an easy one, but there are some things you should keep in mind when considering making such a move.

Analysts reviewed credit reports one month before and one month after a single credit card was opened, as well as reports of users who closed a single card.