LendingTree reviewed the terms and conditions of 167 credit cards that allow balance transfers as part of our 2019 Balance Transfer Credit Card Report. This research showed 0% introductory offers are still easy to find, and while most of those cards charge a one-time fee on that transferred balance, you can find cards that don’t impose a fee if you shop around.

Unfortunately, the news wasn’t all good. In creating the report, we also commissioned a survey to ask cardholders about their own history with balance transfer cards to gauge their understanding of these cards, which are popular with both consumers and issuers alike. What we found was fewer cardholders said they paid their transferred balances in full during the introductory 0% period in 2019 than in 2018. Furthermore, many were confused about just how these cards even worked.

There is a silver lining, however. It turns out that 0% balance transfer offers aren’t as tricky as people think they are. Yes, there are deadlines, fees and some nuances that consumers should understand before applying for a balance transfer card, but these cards are a better deal than most people realize. 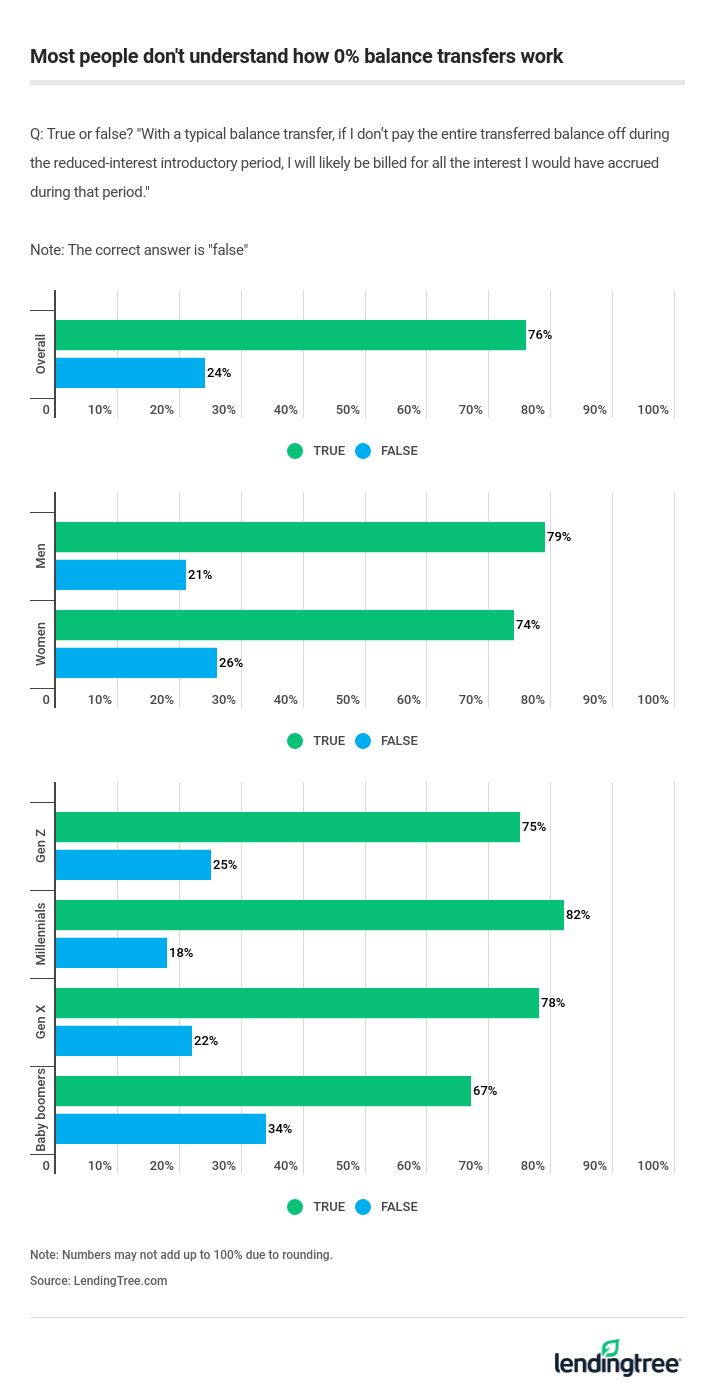 There’s so much jargon around credit cards that it is very easy to get confused. Balance transfer credit cards are no exception, and our survey shows that the terminology around the 0% introductory offer on balance transfer cards is a major source of confusion for consumers.

A 0% introductory offer on balance transfers generally works like this:

That’s it. Even if you don’t pay the transferred balance off in full during the 0% promotional period, you won’t be billed retroactively for interest you would’ve accrued during that time.

Contrary to the facts of how a balance transfer card works, most of our survey respondents – 3 in 4 cardholders, including 82% of millennials – think they will get hit with a bill for that retroactive interest. It’s a concept called “deferred interest,” and while it is typically not seen with balance transfer offers, most cardholders believe that it is.

Deferred interest is most commonly seen in so-called special financing deals with retail credit cards. Under these deals, you pay on a purchase for six months or more with no interest. If you pay the entire purchase off during the no-interest period, you never pay any interest. However, if you don’t pay the balance in full during the promotional time frame, you will be hit with a bill for all of the interest that you would have accrued on the purchase going back to the day you bought it. That’s true even if you paid $999 of a $1,000 purchase, and it can come as a real shock to an unsuspecting cardholder. 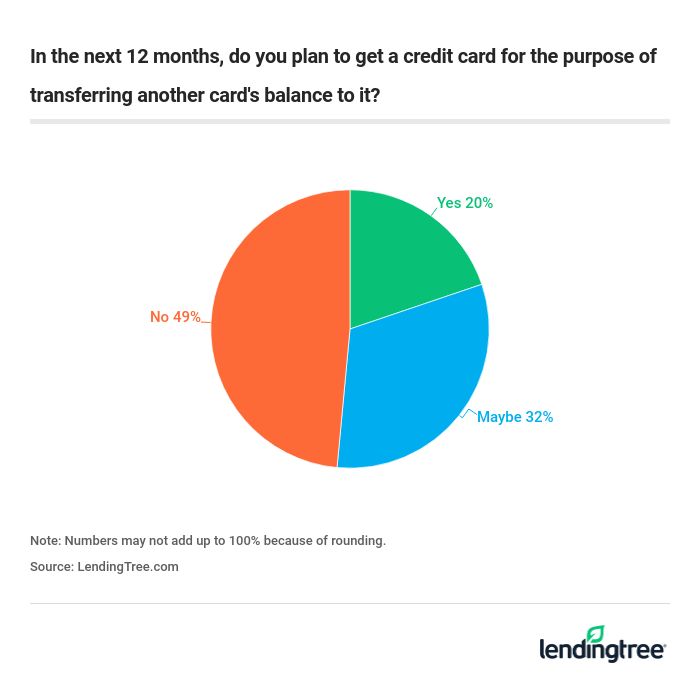 Despite any confusion surrounding them, balance transfer cards remain popular. More than half of cardholders said they’re at least considering getting a new credit card in order to transfer a balance next year.

Perhaps surprisingly, six-figure earners are more likely than any other income bracket to have done a transfer. Among cardholders, men (55%), Gen Xers (57%) and parents of young children (62%) are also likely to have used a balance transfer card.

For our annual study, we reviewed the terms and conditions of 167 cards that allow balance transfers. Here’s what we found: 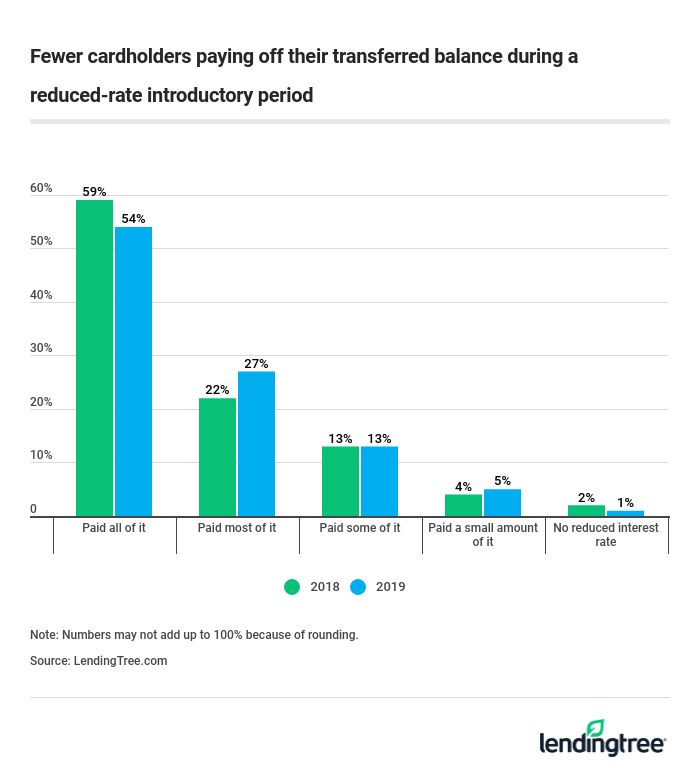 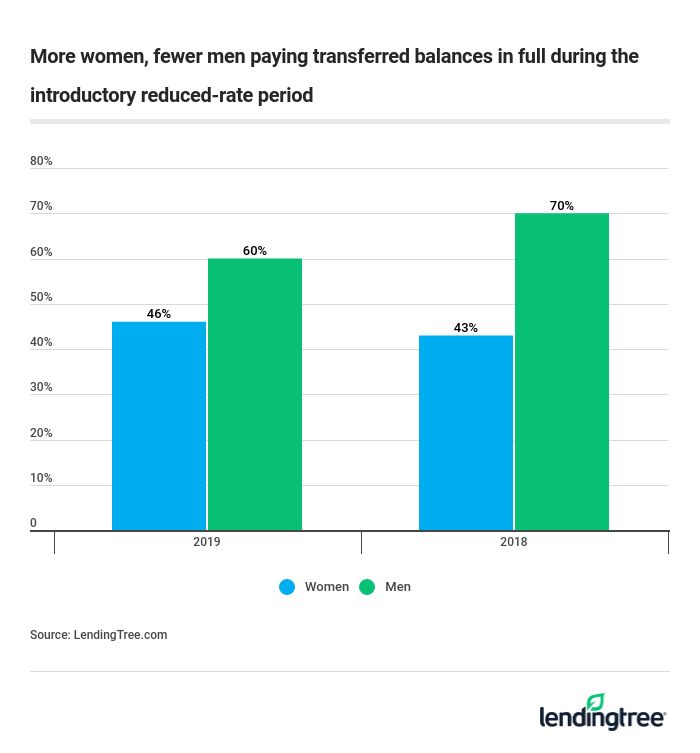 While we looked at a slightly different sampling of credit cards – a few cards added from last year’s list, a few removed for various reasons – for this year’s survey than for the 2018 report, it is clear that 2019 was not a year of seismic change in the balance transfer space. For example, the average duration of an introductory 0% APR offer (14 months) was unchanged, as was the most common balance transfer fee (3%). That means plenty of good balance transfer credit card offers are out there, and barring a sudden, sharp downturn in the economy, they’re probably not going anywhere anytime soon.

What did change was the percentage of cardholders paying off their transferred balances during the 0% APR introductory period. In 2018, 59% of cardholders say they did that with their most recent balance transfer. That’s down to 54% in 2019, powered mostly by a significant drop in men paying their balances in full. In the 2018 survey, 70% of men said they did so, while just 60% did in 2019. (The percentage of women saying the same actually went up, growing from 43% to 46%.)

If you’re struggling to pay off your balances, introductory 0% APR balance transfer cards should absolutely be one of the weapons you use to attack that debt. Getting a yearlong (or longer) reprieve from accruing interest can be a godsend, and these cards can bring you that, when used wisely. That last part is key, though. These cards can be a great tool to help you conquer your debt, but if you don’t make a commitment to pay off as much of the balance as possible during the interest-free period, that hole you’re standing in is only going to get deeper.

In addition, LendingTree commissioned Qualtrics to conduct an online survey of 791 credit cardholders, with the sample base proportioned to represent the overall population. The survey was fielded Nov. 1-4, 2019. The overall margin of error for all respondents is +/-3%.

About 75% of credit cardholders have a fundamental misunderstanding about how introductory 0% balance transfer credit cards work.