Credit cardholders in New York state carry more cards and more debt than the average American with a credit card, according to a new report from LendingTree.

We reviewed anonymized credit report data from more than a million LendingTree users to get an overview of the state of credit card debt in America, examining data on late payments, debt, card ownership, utilization rates and more.

Here we focus our attention on credit card debt in New York state. We compare Empire State debt data to those of its tri-state area neighbors and the rest of the country. We also look at the state’s biggest metropolitan areas to see how they compare.

Finally, we answer some basic questions about credit card law in New York State because we know debt isn’t just about the numbers. 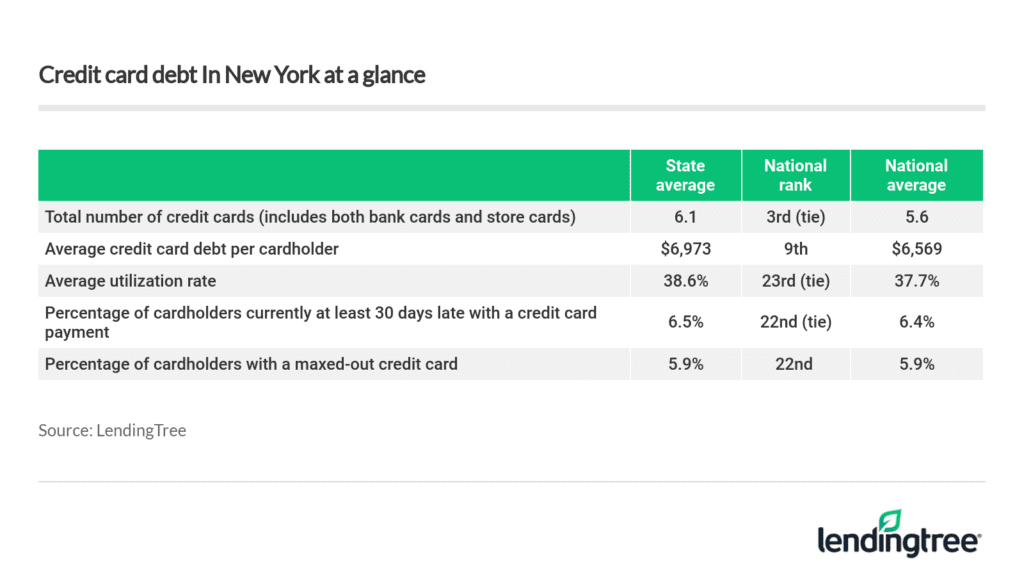 How much credit card debt does the average New York state cardholder have?

That’s the ninth highest total in the nation. New York’s neighbors in New Jersey have the most debt in the nation, at $7,872

What percentage of New York state cardholders are currently at least 30 days late with a credit card payment?

That places New Yorkers squarely in the middle of the pack nationwide. The national average is 6.4%.

How many credit cards does the average New York state cardholder have?

6.1, tied with Florida and Rhode Island for the third highest total in the nation.

The only two states whose residents have more cards? New York’s neighbors, New Jersey and Connecticut, who have 6.7 and 6.3 cards, respectively.

The national average was 5.6 cards.

New Yorkers’ utilization rate is far higher than that and higher than it ideally should be. However, it is only slightly above the national average of 37.7% and it ranks just 23rd highest in the nation.

The highest utilization rates are in Mississippi (48.8%), while the lowest are in Illinois (31%).

What percentage of New York state cardholders currently have a maxed-out credit card?

That’s the same percentage as the national average, and it ranks New York 22nd in the nation.

There’s a huge disparity between the top and bottom of this list. Mississippi leads the nation at 10.1%, while Oregon has the lowest percentage at 3.7%.

How do New York state cardholders compare to those in the rest of the tri-state area?

The good news is that, compared to their neighbors in New Jersey and Connecticut, cardholders in New York have, on average, fewer credit cards and significantly less debt.

New Jersey, as mentioned earlier, has the highest average credit card debt in the nation. However, Connecticut is not far behind, in second place. New Yorkers rank 9th but still owe far less than their neighbors.

The bad news? New York cardholders have higher utilization rates and are more likely to be late with a payment and max out a card than the other two states. 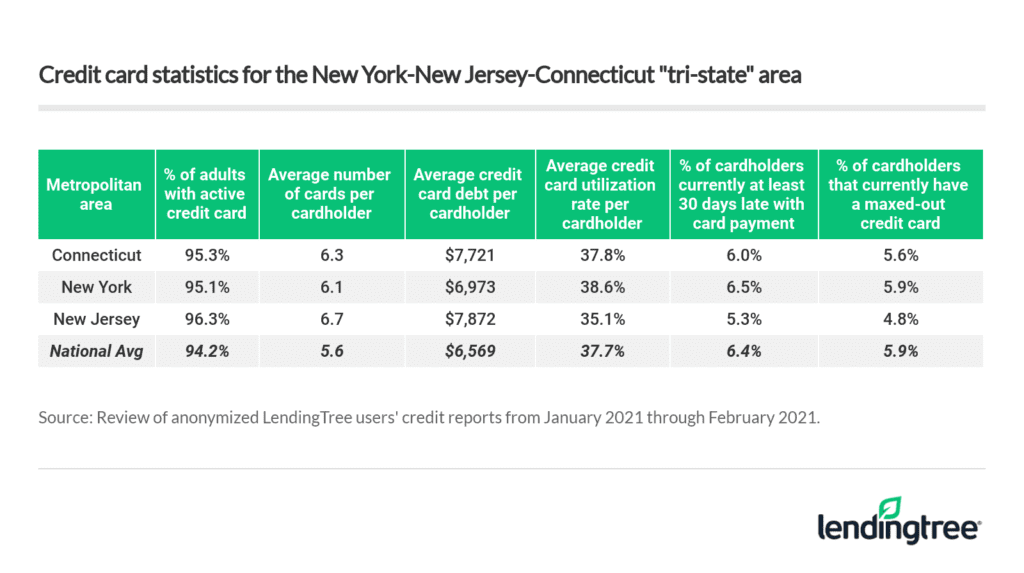 Which New York cities have the most and least credit card debt?

New York City residents have by far the most credit card debt among New York state’s biggest metropolitan areas. The average cardholder there owes $7,631. That’s about $1,000 more than the city with the second-most debt, which is Buffalo.

Meanwhile, cardholders in Binghamton owe just $5,522, which is about $1,000 lower than the national average. 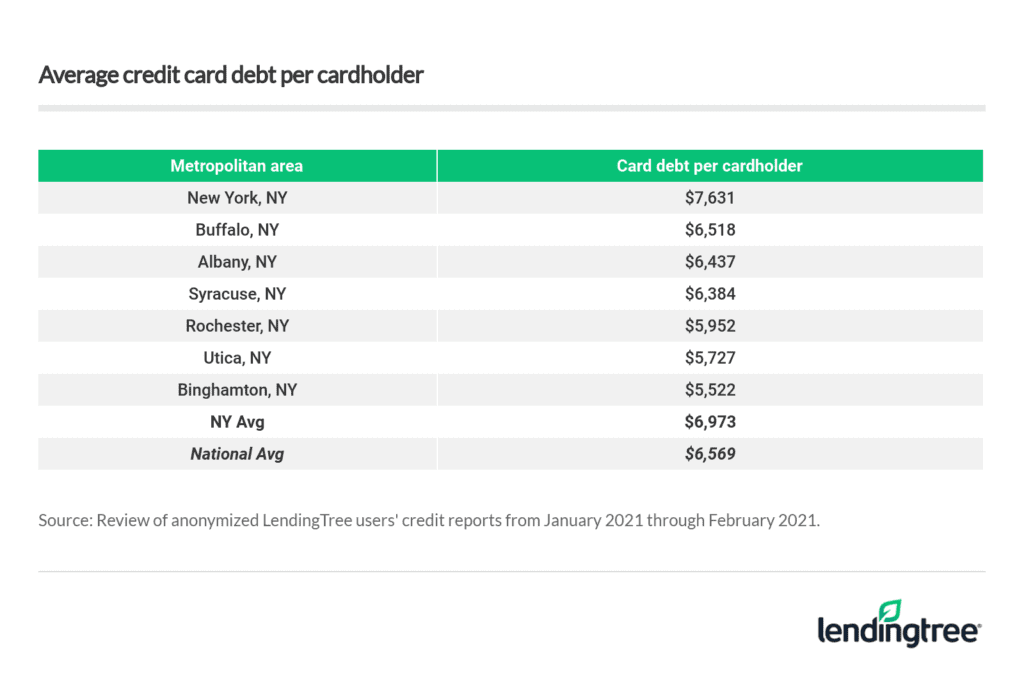 Which New York cities have the highest and lowest percentage of cardholders who are at least 30 days late with a card payment?

That’s good news for New York City residents because late payments can wreck your credit score, and a wrecked credit score means your next rewards credit card or cash back credit card may come with a much higher interest rate. 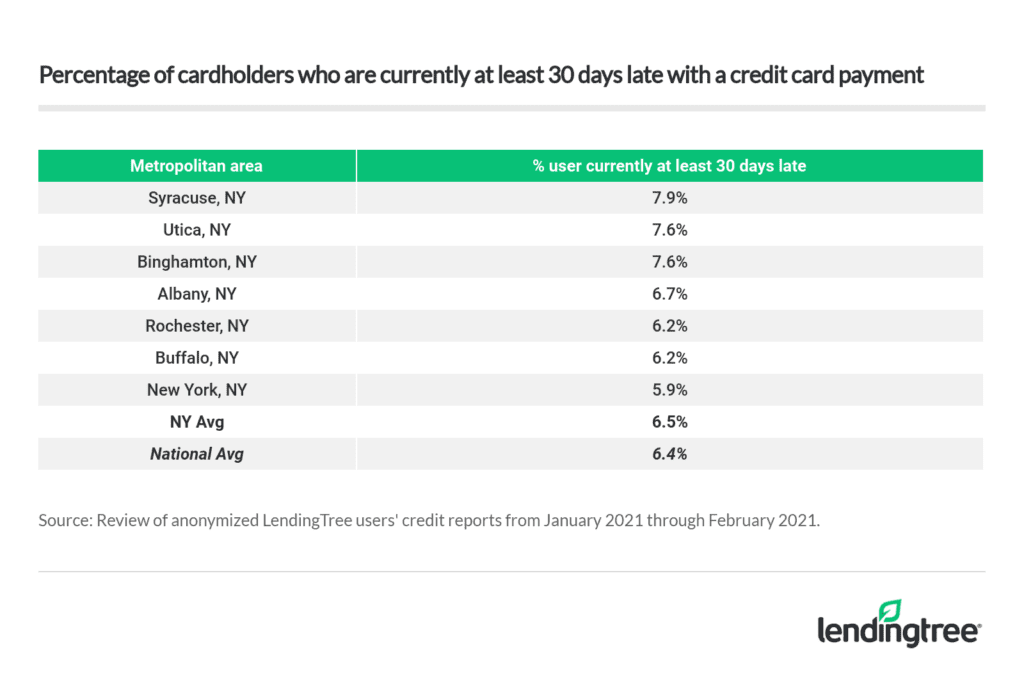 Which New York cities have the most and fewest credit cards?

New York City residents have the most credit cards per cardholder at 6.4, while Albany, Rochester and Syracuse all rank at the bottom of the list at 5.8. 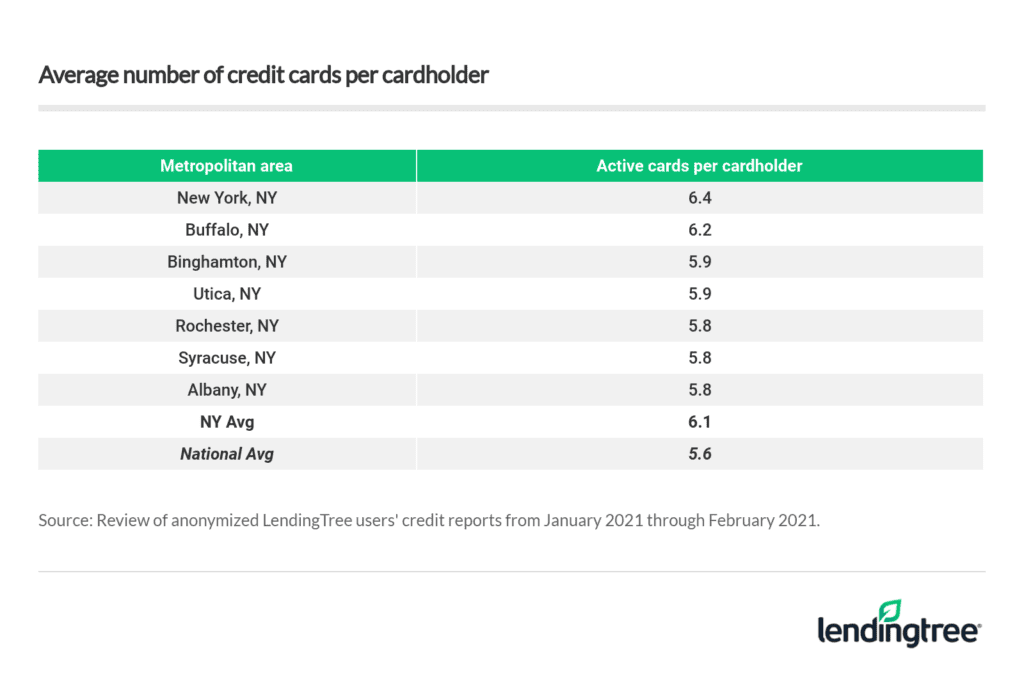 Which cities have the highest and lowest credit card utilization rates in New York?

Binghamton cardholders have the state’s highest utilization rate at 41.7%, while Rochester cardholders’ rate is just 36.1%.

A utilization rate is the comparison of debt to available credit. Knowing that, the fact that Binghamton has both the highest utilization rate and the lowest average debt in the state tells you that the average credit limit is relatively low in that city. 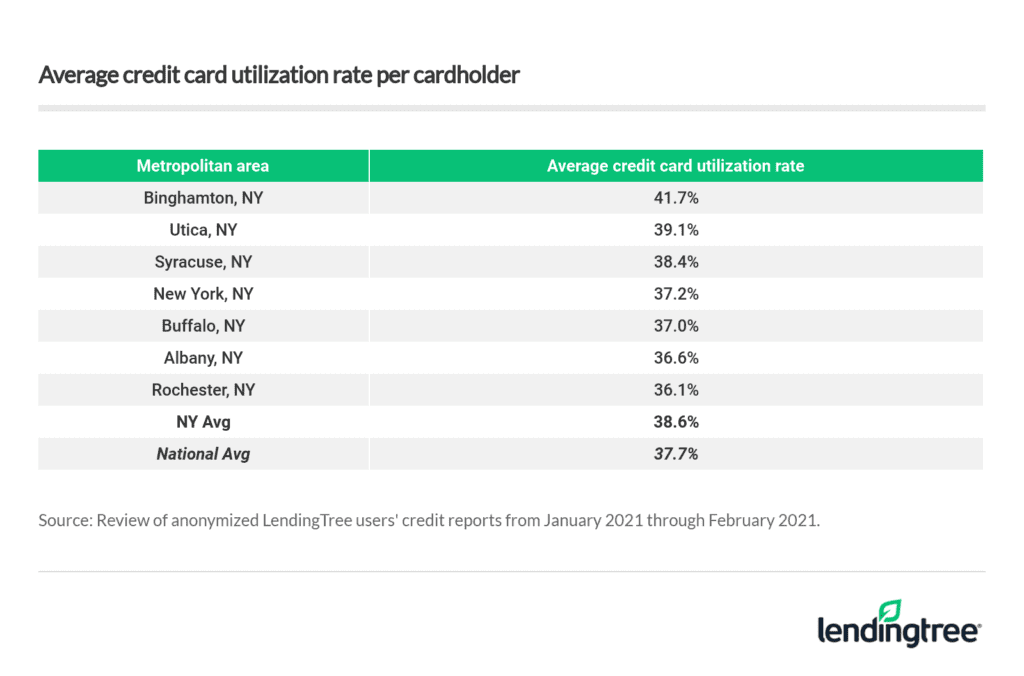 Which New York cities have the highest and lowest percentage of cardholders with a maxed-out credit card?

On the other end of the table, just 5.6% of cardholders in Rochester and New York City currently have a maxed-out credit card. 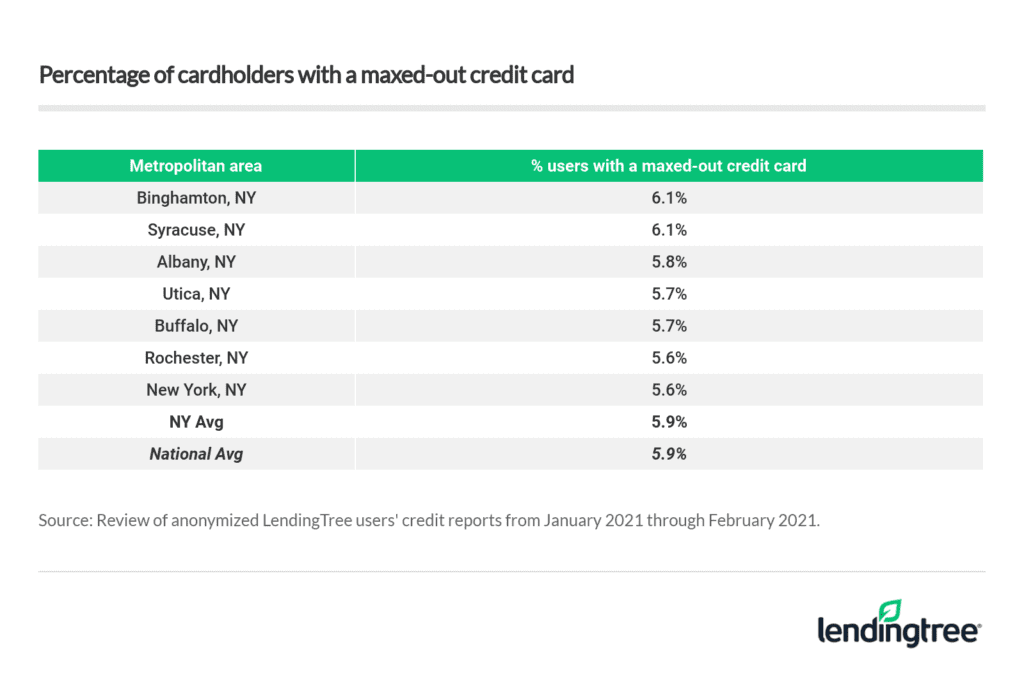 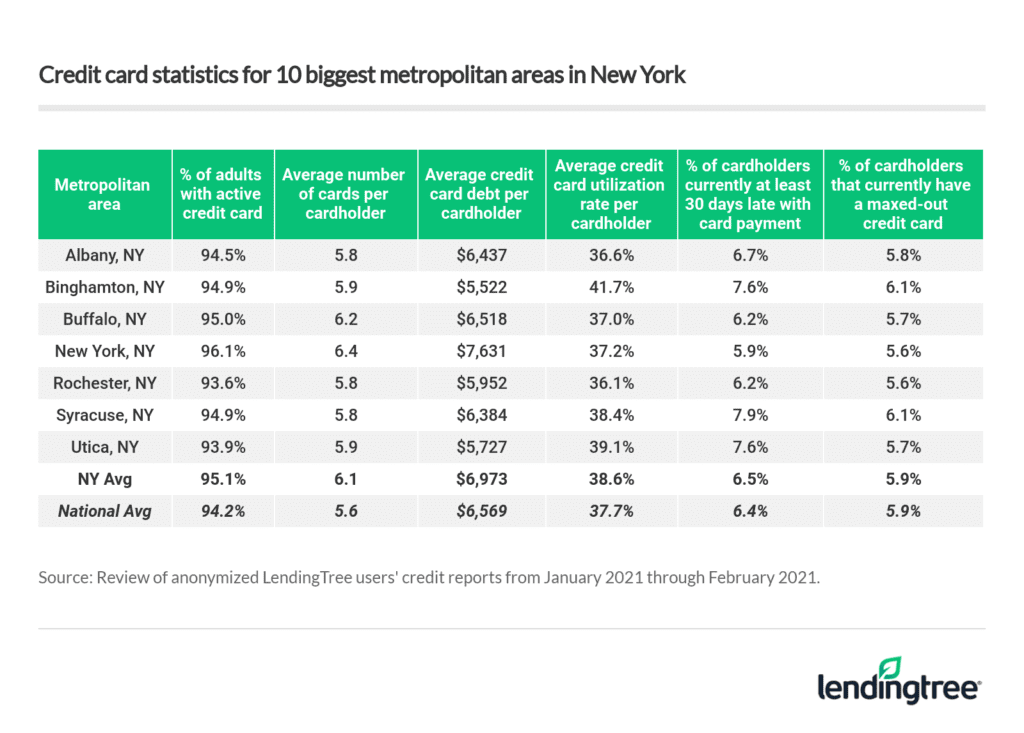 The laws governing credit card debt can vary in a big way from state to state. In the section below, we answer key questions that cardholders need to know about card debt in the state of New York.

What is the statute of limitations on credit card debt in New York state?

The statute of limitations on collecting credit card debt is generally six years.

However, it is important to remember that if you make a payment on that debt after the time limit has passed, the clock can reset, and the debt can become collectible again.

Can your wages be garnished for credit card debt in New York state?

Yes, but it requires the creditor to get a court judgment against you.

The short answer is no. Credit card surcharges are prohibited in the state of New York.

Still, it hasn’t stopped the New York Department of State from informing New York businesses about the laws that are still on the books.

“Businesses are not allowed to advertise a price and add a surcharge at the point of sale when a consumer elects to pay with a credit card,” the NY state department’s website says. “Instead, businesses are required to inform consumers of the higher credit card price for a product or service by posting the higher price. Businesses are also able to offer a discount to consumers who pay in cash.”

However, again, court rulings have largely made these laws unenforceable. So while laws exist that prohibit credit card surcharges in New York state, the reality is that businesses can charge these fees as long as they are properly disclosed.

Credit cardholders in New York state carry more cards and more debt than the average American with a credit card, according to a new report from LendingTree.