The number of new credit cards opened in March and April plummeted in 2020, according to a new report from LendingTree, as both consumers and issuers wrestled with the impact of the coronavirus pandemic. 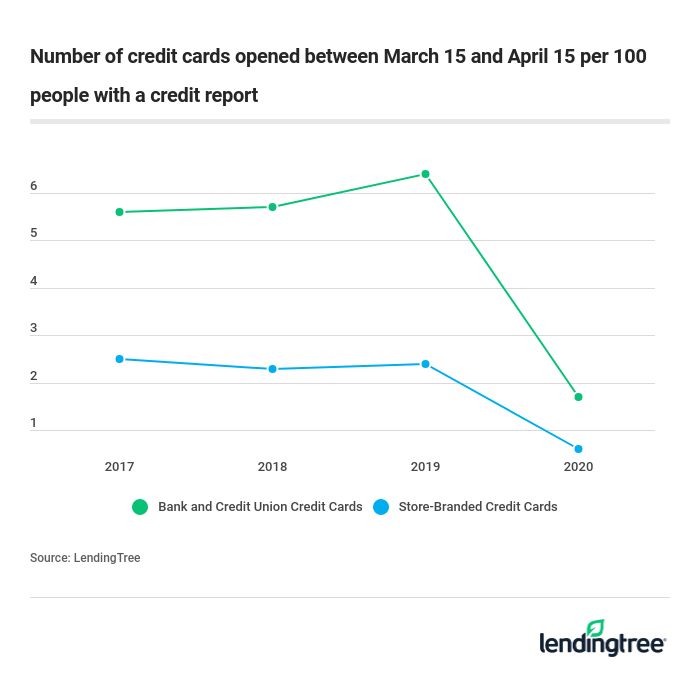 The impact of the coronavirus pandemic on our economy has been seismic – and fast. About 30 million Americans have filed unemployment claims since mid-March. That means that a staggering number of people in this country had their financial lives turned upside down in a whirlwind.

As we saw a decade ago during the Great Recession, massive economic changes tend to spur big action from credit card issuers. We’re seeing something similar play out in the wake of the COVID-19 crisis.

Banks and other lenders are all about managing risk. In a stable economy, they’re willing to offer many new cards to many new people – and even offer higher credit limits to their current cardholders – because they’re confident those borrowers will pay them back.

When the economy is uncertain, as we are currently witnessing, plans change and lenders get nervous. When lenders become wary, they resort to reducing credit limits on existing accounts, or even close those accounts altogether, because all that available credit just looks like unnecessary risk to the bank. That’s especially true in times of high unemployment. After all, if someone loses their job, they can change from a safe borrower to a risky one overnight. lenders don’t like that uncertainty, so they rein in credit. And we’re already seeing that happen.

As the charts below show, however, lenders aren’t just tightening limits on existing accounts. They’re also offering fewer new credit cards and giving out less available credit on new cards than they have in recent years.

That’s a big deal for card issuers. Historically, consumers open more bank and credit union-issued cards in March and April than during any other time of year. Things look quite different this year, though. 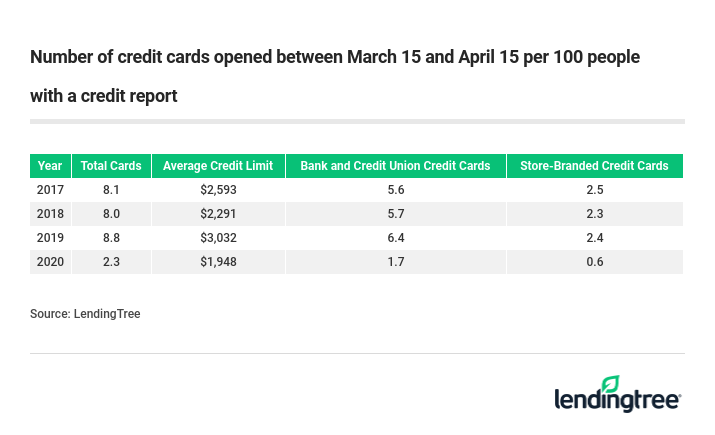 Is lower demand for credit driven more by consumers or lenders?

One big question from this report is whether fewer credit cards are being opened because consumer demand has plunged or because the appetite from card issuers for lending has vanished. The most likely answer is a combination of the two.

Recent data from the Federal Reserve and the Consumer Financial Protection Bureau (CFPB) indicated a drop in consumer demand in the first quarter of 2020. While some cardholders might be spending more on their cards, perhaps using them as a de facto emergency fund to help them make ends meet after losing their job, many other cardholders are spending far less. They’re following social distancing guidelines or stay-at-home orders, so they’re not spending at restaurants, bars or ball games. Consumers are also not likely to book plane tickets during this time. Given all that, a reduction in consumer demand makes sense.

Meanwhile, several major credit card issuers have said in recent weeks that they are tightening their lending. As mentioned earlier, this is to be expected. Unfortunately, it is not likely to change any time soon.

Add it all up, and it seems likely we’ll continue to see a less-than-average number of new credit cards opened in coming months.

Tips for dealing with a rejection

If you’re turned down for a credit card, there are a few steps that you should consider.

Using a random sample of 100,000 anonymized credit reports of May 4, 2020, from My LendingTree users, analysts counted the number of cards that originated in the period of March 15 through April 15 in the years of 2017, 2018, 2019 and 2020. Additionally, we selected at random, 1,000 credit reports immediately following originations during those periods to calculate the average credit limits they received.