More Than 3 in 4 Cardholders Have Been in Credit Card Debt, and Some Have Spent 5+ Years Paying It Off

If you’re grappling with credit card debt right now, you’re in the same boat as 50% of American cardholders, plus another 26% of consumers who’ve been in debt at some point in the past.

In other words, battling the debt cycle — sometimes for years — is a reality for most people, according to a LendingTree survey of nearly 1,600 credit cardholders. Here’s a look at cardholder debt, the reasons behind it, generational differences and strategies for taming those balances.

The vast majority of credit cardholders have been in debt

Led by millennials (56% of whom are carrying debt today), the majority of consumers have been in credit card debt at some point. Even six-figure earners aren’t immune, with 49% saying they are carrying balances right now.

Parents with kids under 18 (61%) are also more likely to have credit card debt than those with adult children (45%) or non-parents (44%). Financial fallout from the COVID-19 crisis was also a big driver of credit card debt, impacting those laid off or furloughed more than those who had no loss of income (63% versus 43%).

“It’s certainly no surprise that most cardholders have had card debt at some point,” said Matt Schulz, chief credit analyst for LendingTree. “Life is expensive in 2021, and credit cards act as a lifeline when times get tough.” 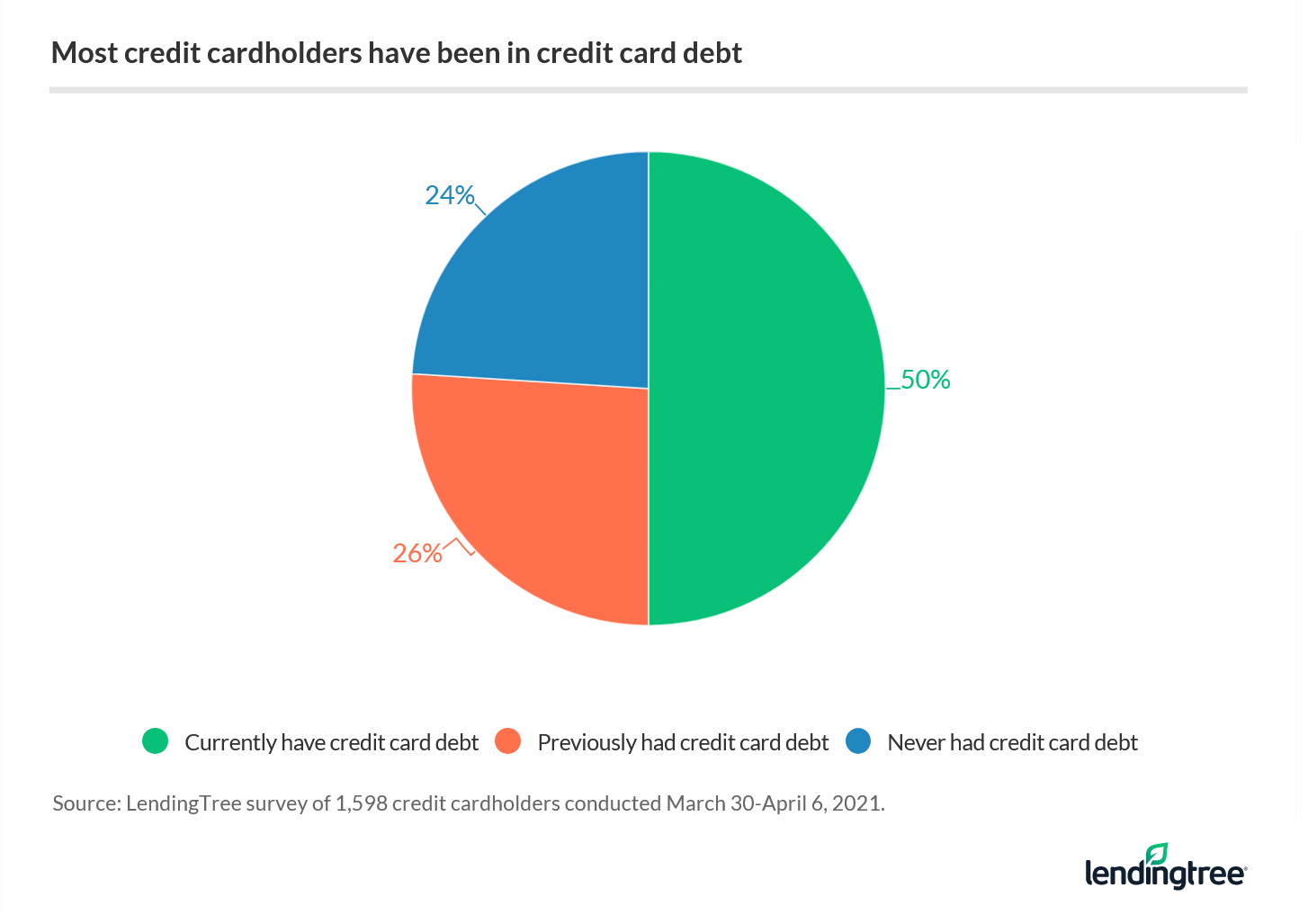 Carrying a balance might not seem that big of a deal, but it tends to stick with consumers for a long time — 73% said for more than a year, including 25% who have been in credit card debt for more than five years. Gen X was the group most likely to be in the five years or more debt club. 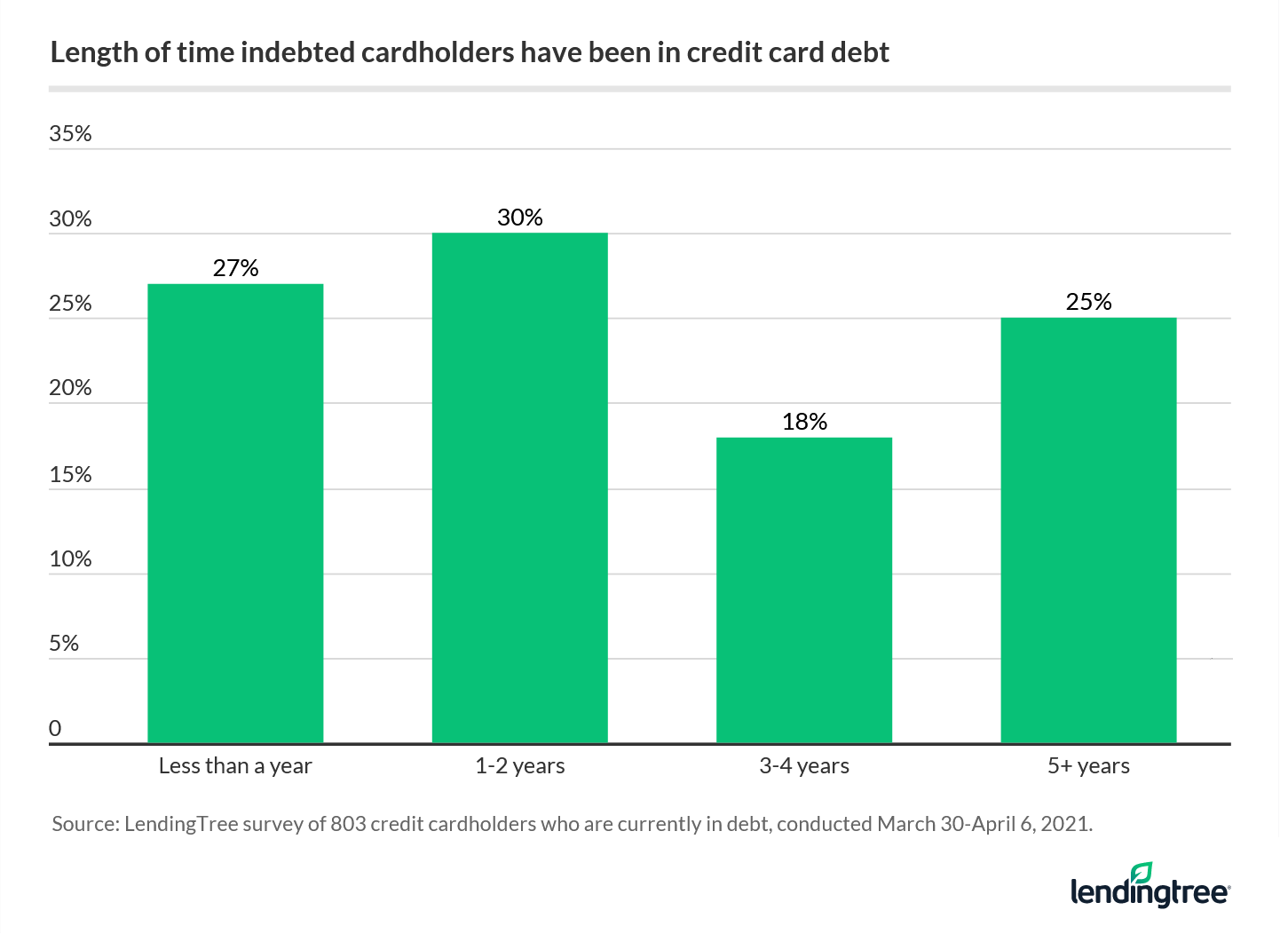 Higher incomes correlate to higher balances, with nearly 4 in 10 of indebted people earning more than $100,000 owing more than $10,000. But there aren’t any significant balance differences based on generation, gender or family structure. Overall, 78% of those with debt said their balance is $1,000 or more.

And among those carrying debt, 41% said it’s spread across more than one card, with a higher percentage among Gen X (46%) and baby boomers (57%). 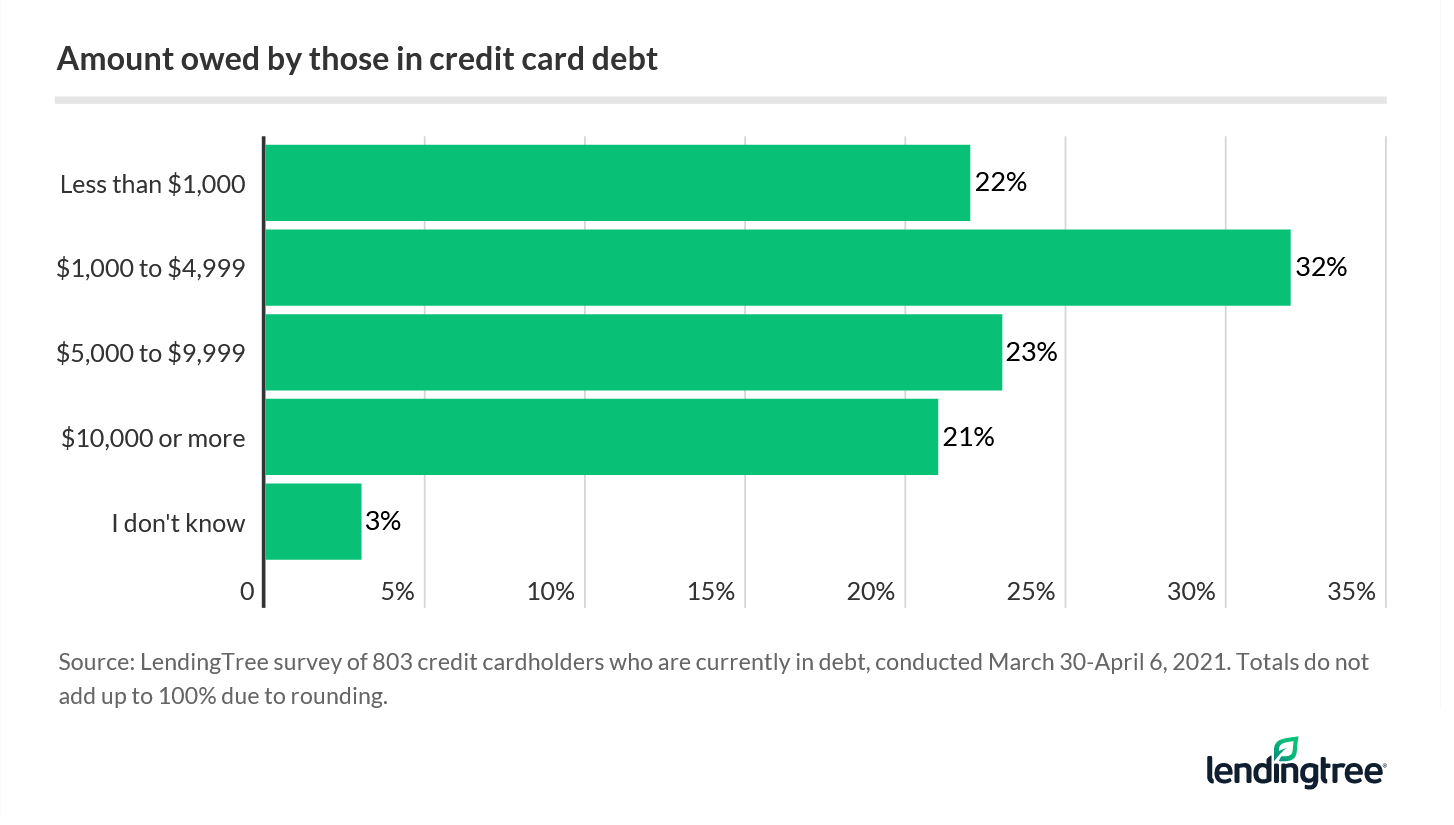 “Once you’re in significant credit card debt, it’s really hard to get out,” said Schulz. “They simply can’t carve enough out of their budget on an ongoing basis to make a real dent in that debt, and often they end up adding to the debt with basic life expenses or unexpected emergencies.”

Shopping is a primary driver of credit card debt, but so are basic living expenses
Though some debt may be the result of poor spending decisions, in many cases, credit card balances pile up when people are going through a financial struggle, such as a job loss, a health problem or an unexpected emergency.

Other noteworthy findings: Boomers (31%) were the most likely generation to say credit was used to cover basic needs, while 12% of Gen Z blame their debt on not understanding how credit cards work. Among six-figure earners, though, more than 40% with credit card debt blamed it on shopping.

“Often the trouble is more about having too many needs that you can’t afford rather than indulging in too many wants,” said Schulz.

As for the splurging that sometimes happens, Schulz isn’t surprised that 11% of indebted millennials and Gen Z pointed to social media pressure as the culprit. “Retailers and influencers have perfected the subtle art of the sale via Instagram posts and other such things… it’s a significant contributing factor to credit card debt in this country,” he said.

Some cardholders look to balance transfers to eliminate debt

Nearly a quarter (23%) of cardholders decided to open a balance transfer card this past year to try to pay down their debt with a period of 0% or reduced interest. And almost half (45%) of respondents said they are considering opening a balance transfer credit card within the next year.

Balance transfers are especially popular among Gen Z and millennials: 37% of Gen Z and 36% of millennials did one in the last year. But you typically need a good credit score for such offers, and not everyone qualifies, including 16% of Gen Z, 11% of millennials and 8% overall. 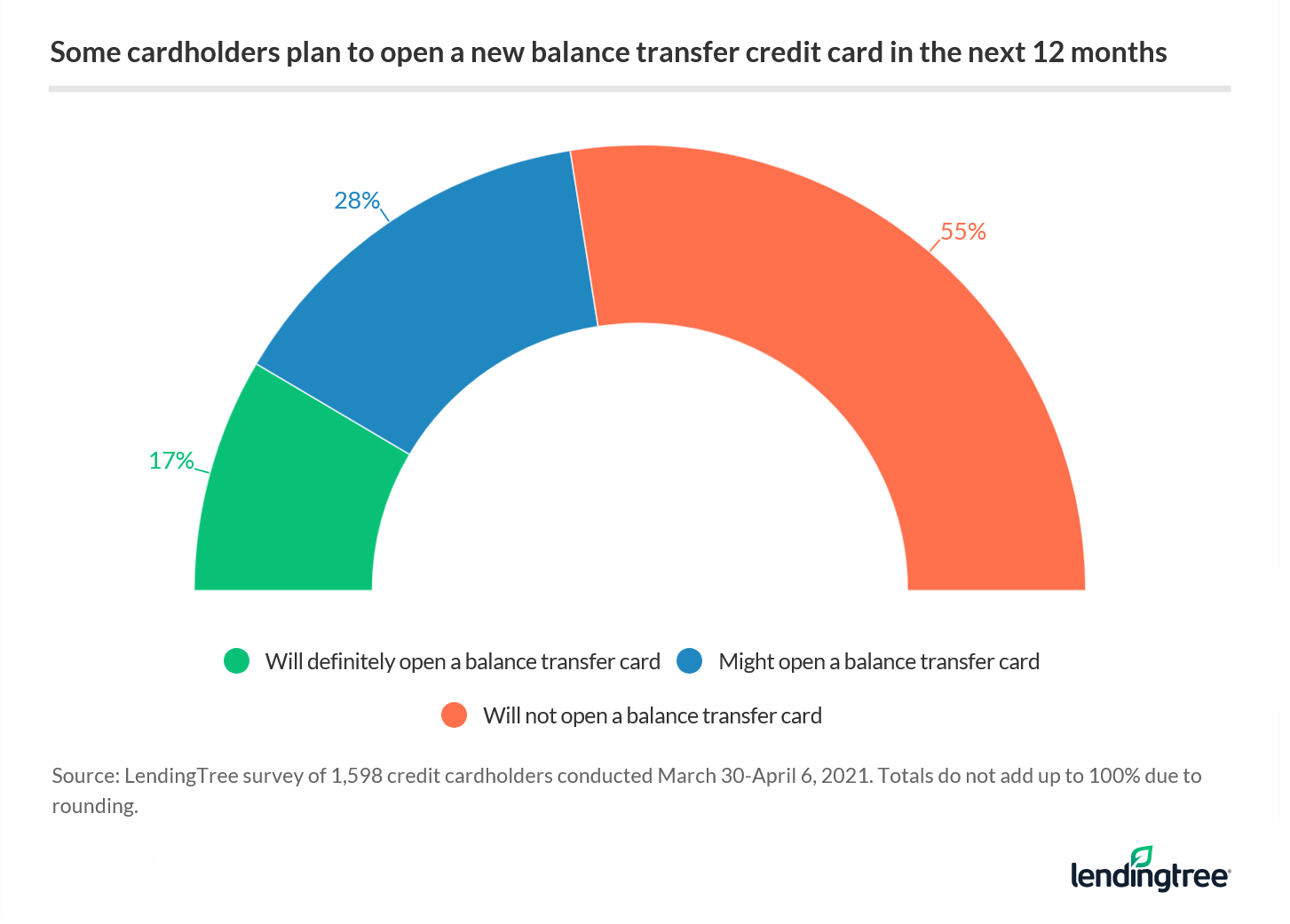 The primary appeal of a balance transfer credit card is an introductory period with either reduced interest or no interest. However, too few consumers fully understand the terms: 69% of survey respondents mistakenly think that they’ll get hit with interest charges for the entire period if they don’t reach a zero balance before the introductory period is up.

“That’s a very powerful myth, but hardly any balance transfer credit cards require you to retroactively pay interest if you don’t pay the full balance off during the intro period,” said Schulz. Rather, only any remaining unpaid balance after the intro period is subject to the card’s ongoing APR. This misconception likely comes from confusion between balance transfer cards and so-called special financing deals from retailers that do stick you with a bill for all the interest you would’ve accrued during that period if there’s a remaining balance. 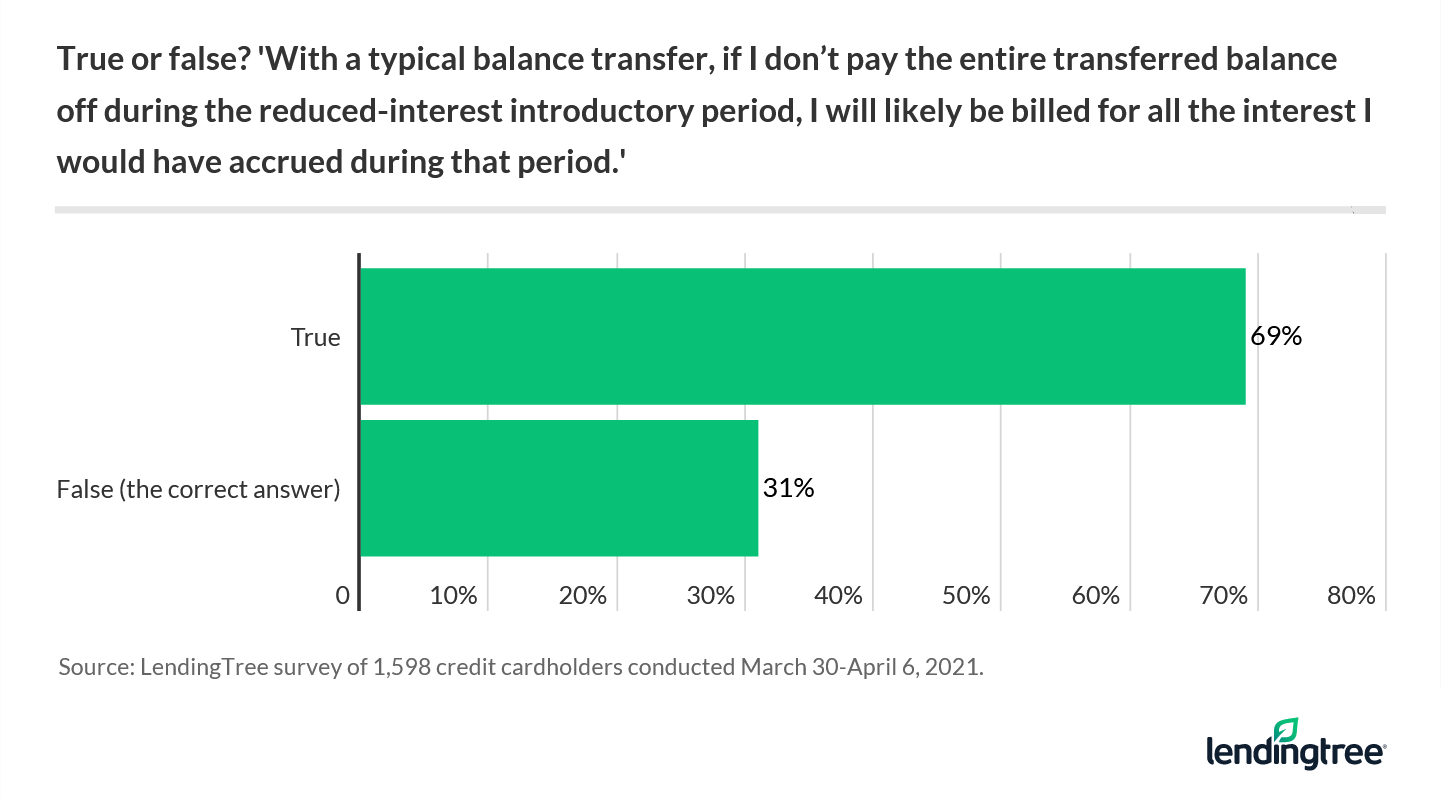 The good news is that balance transfer cards offer a less painful path out of debt: 63% said they were able to pay off their transferred debt during the introductory period. And among those who couldn’t reach zero in that timeframe, more than a quarter (26%) of them were able to make great progress, knocking out 50% to 75% of their balance.

Try these tools and strategies to help you successfully eliminate your credit card debt.

LendingTree commissioned Qualtrics to field an online survey of 1,598 credit cardholders, conducted March 30-April 6, 2021. The survey was administered using a non-probability-based sample, and quotas were used to ensure the sample base represented the overall population. All responses were reviewed by researchers for quality control.

More Than 3 in 4 Cardholders Have Been in Credit Card Debt, and Some Have Spent 5+ Years Paying It Off

Battling the debt cycle — sometimes for years — is a reality for most people, according to a LendingTree survey of nearly 1,600 credit cardholders.