The pandemic has reshaped so much of our lives, including the way we shop for groceries. From how often people shop to how much they spend, to which products they buy, the COVID-19 crisis has had an impact, according to a recent LendingTree survey.

LendingTree asked more than 1,000 consumers in the U.S. about how their grocery shopping behavior and spending has changed, and we offer up tips on how to trim your grocery bills.

Grocery store spending is up despite fewer trips

Whether it’s due to having more family members at home for every meal or because consumers tend to panic shop and stock up in times of crisis, the pandemic has definitely brought with it increased grocery spending costing households around $100 more a month than before the spread of the coronavirus. In fact, another LendingTree study found grocery store spending is up in 49 states.

What’s also noteworthy is that more people say they are taking fewer shopping trips (40%) than those who say they are going out more frequently (34%). If you look at those groups combined, it illustrates that the pandemic has impacted nearly three-quarters of people’s shopping habits. 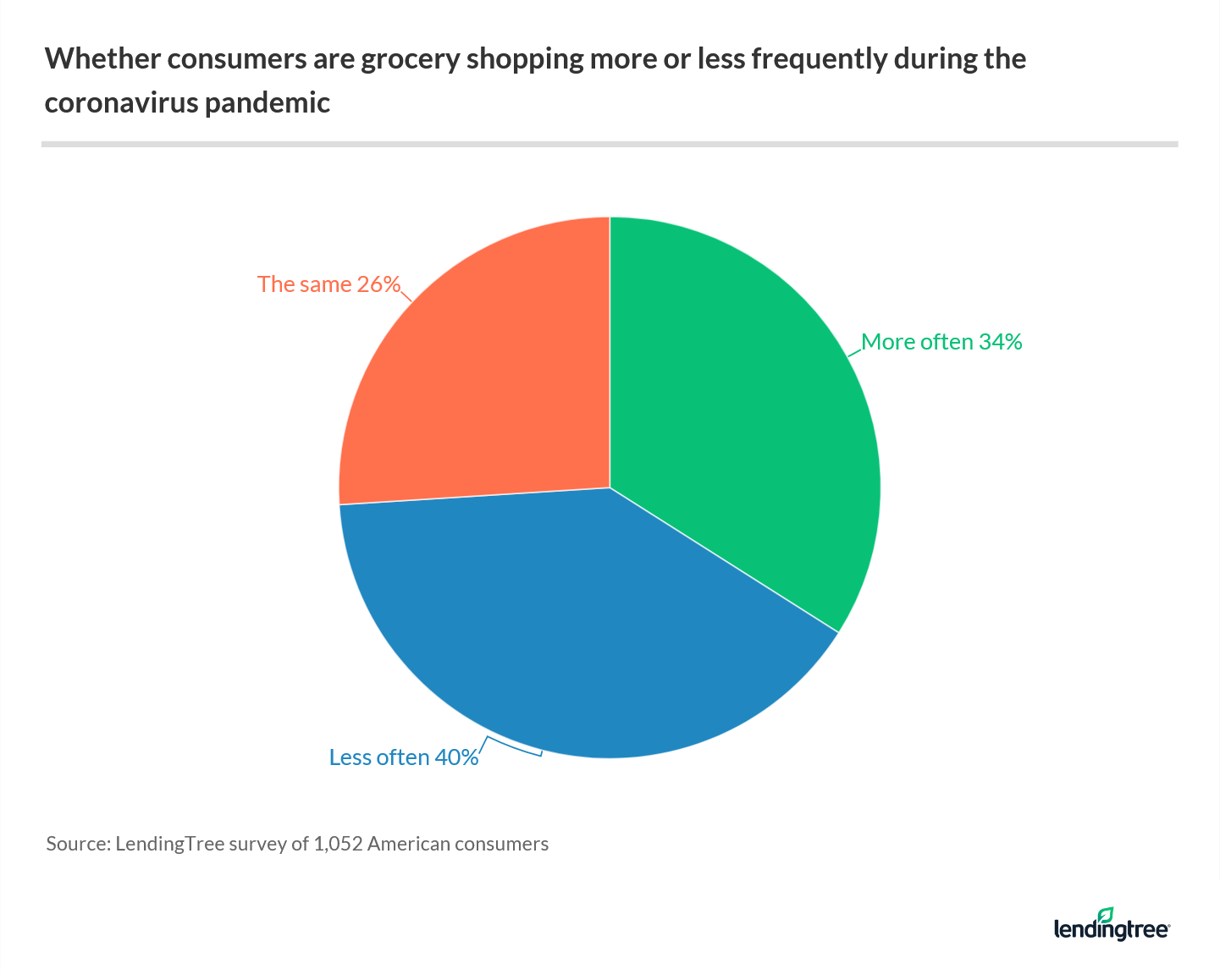 The COVID-19 crisis has also had an effect on how much money people are spending on specific items. Some findings that stand out:

Nearly a third of Americans almost always overspend on groceries, despite using shopping lists and coupons

Consumers are using tried-and-true game plans for saving money at the checkout counter like shopping from a list and cutting coupons, but despite their best efforts, they are still spending more.

Consider this: 87% of consumers say they head to the grocery store armed with a shopping list and they stick with it at least some of the time. Even still, respondents say overspending happens sometimes (45%) or almost all the time (31%). 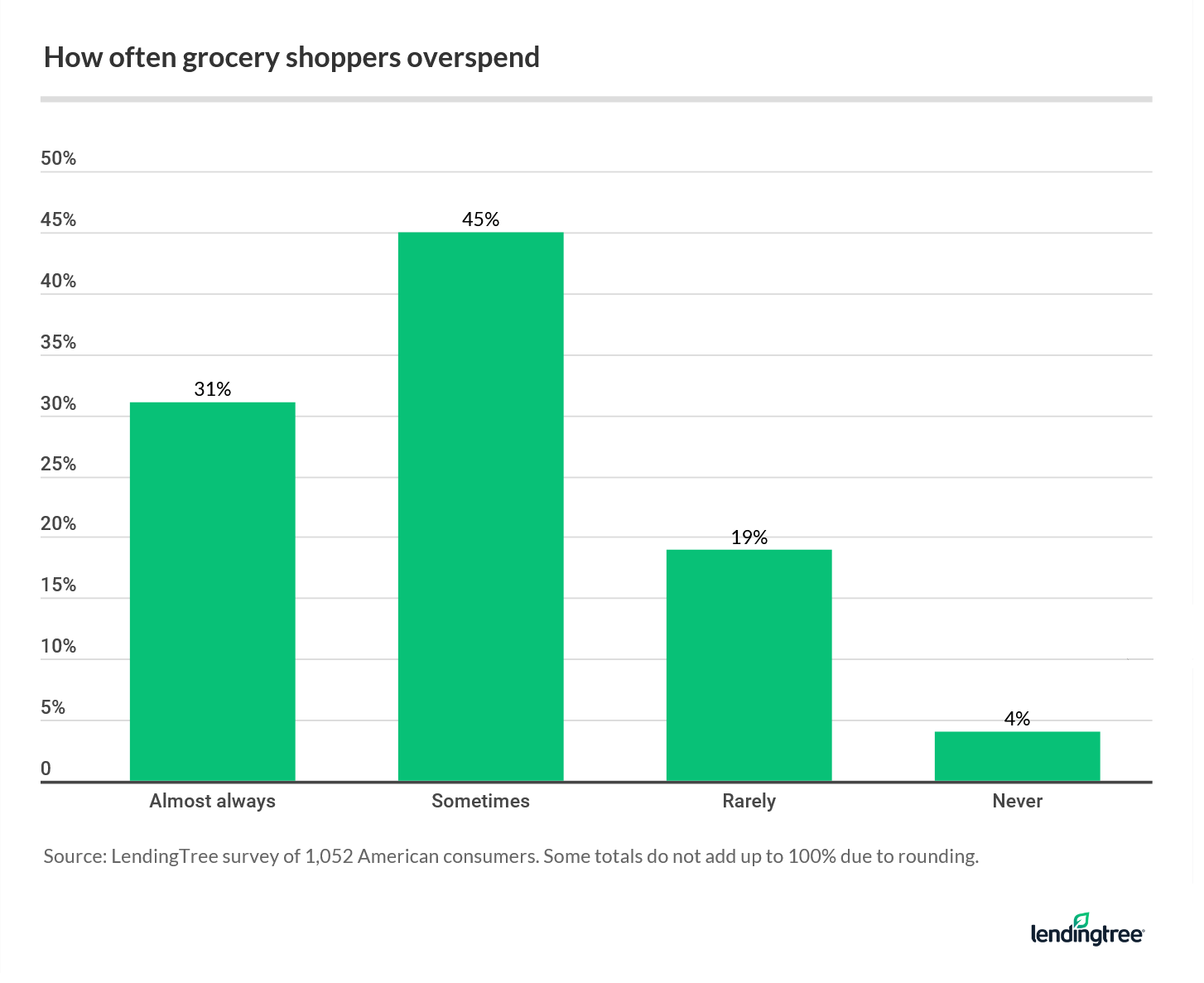 “It’s no secret that avoiding impulse buys at the grocery store requires major self-control,” said Matt Schulz, chief industry analyst for LendingTree. Not to mention that it can be harder to stay focused when you’re dealing with the various stressors of 2020.

“The stores are designed to tempt you to buy at every turn. You don’t have to give in, though,” said Schulz. Try rethinking your shopping trip as an organized mission rather than a casual browse, he said. “That helps keep your focus away from the impulses.”

Other ideas are not going to the store when you’re hungry since that tends to cause you to buy more tasty treats than you need.

“Shopping with a buddy can help keep you on point, too,” said Schulz. You and your shopping partner can keep one another in check while going down the aisles. And if at all possible, leave the kids at home when you shop. “Any parent knows that a kid in a grocery store is 1,000 impulse buys waiting to happen,” said Schulz.

On the positive side, 35% of all shoppers are using coupons more now than they did before the pandemic.

“As any couponer can tell you, it doesn’t take many coupons for the savings to really add up,” said Schulz. For the millions of Americans whose financial lives have been shattered by the pandemic, coupons can be a crucial way to extend a limited budget. 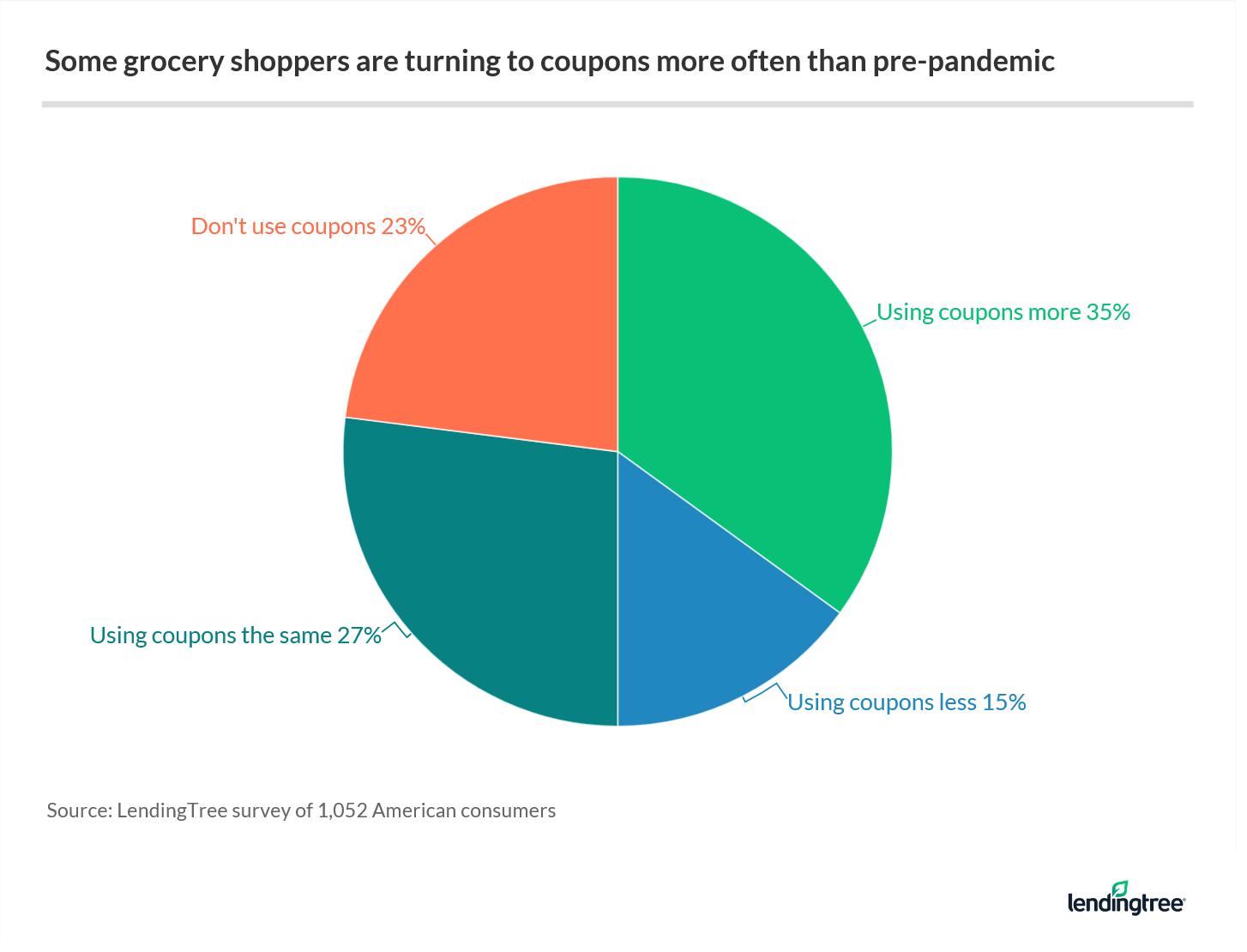 All of this extra grocery spending can also pay off for those who shop with cashback credit cards. The survey found that 49% of shoppers are earning rewards for their grocery spend.

“Cashback cards can be a big deal for folks trying to extend their budget,” said Schulz.

For example, he points out that the card is allowing new cardholders to

There are a few other grocery rewards cards that offer a strong earnings rate for groceries, so shop around. “Just make sure you read the fine print,” said Schulz. For example, a credit card offering rewards as a grocery bonus category might not include purchases made at Walmart or Target — and since 34% of respondents said they shop at these big box retailers, it’s important to understand that distinction.

In another LendingTree survey, it was revealed that 56% of parents are in debt due to the pandemic. That could have something to do with the disproportionate amount of increased spending on groceries that parents of kids under 18 are doing with 48% of parents with young children at home versus 31% of total respondents.

Besides having to feed children meals that would normally be eaten at school, having kids in tow while you’re shopping or dealing with picky eaters can get expensive. For instance, the survey found that parents are more likely to buy organic and name-brand items.

“Shopping without the kids means there’s no one to complain about buying the generic version or the store version instead of the name brand,” said Schulz. It also means no pushback should you decide to take your time checking prices, or want to go to a second or third store in search of a better deal.

In fact, parents say they actually do go to more stores and shop more often, which can be a good way to get the best sales. On the other hand, more trips can backfire if you end up tossing in a few additional items each during every visit. 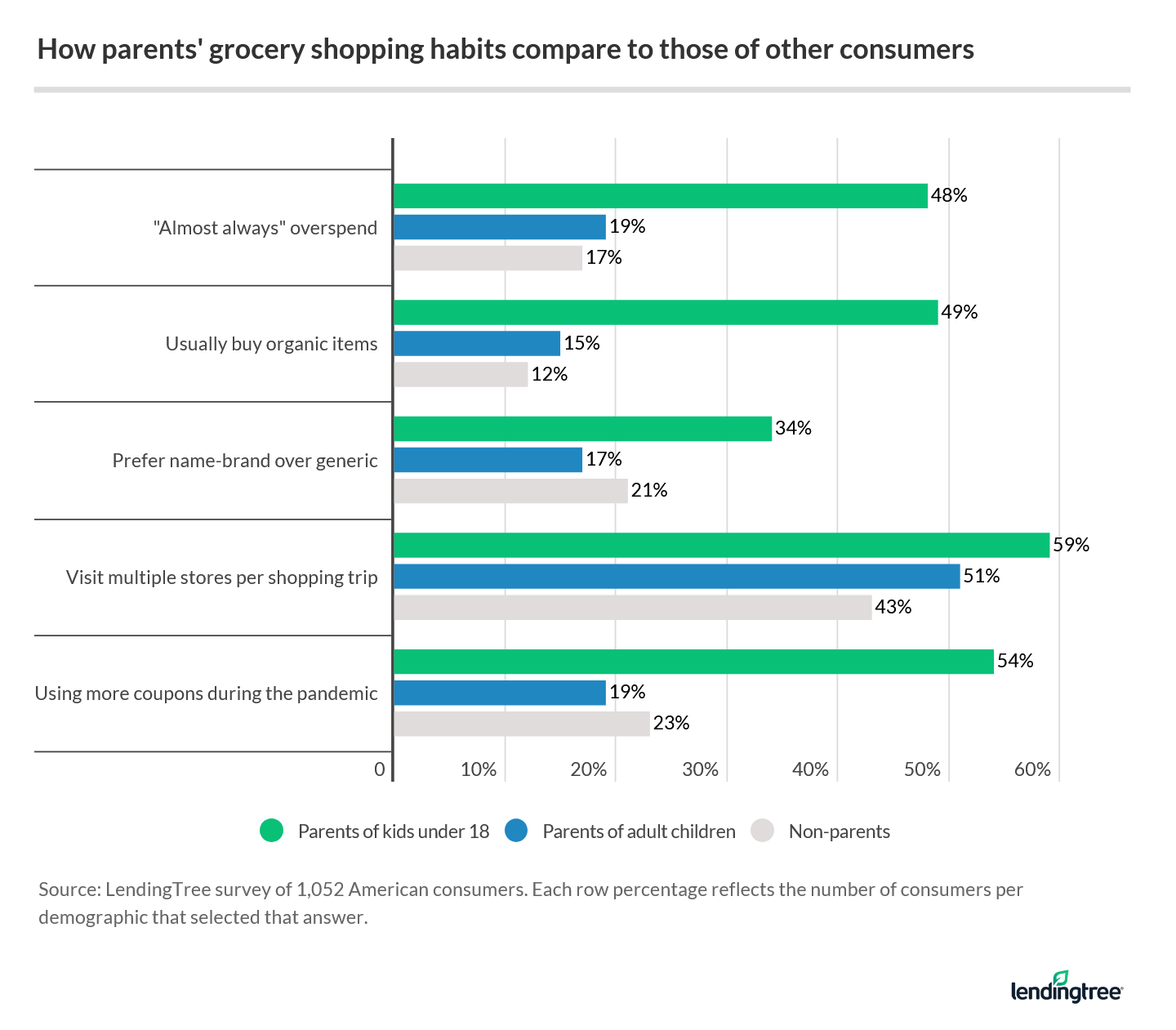 To compensate for the higher bills, 54% of parents are couponing more often, which is always a good thing.

Of course, you shouldn’t feel guilty for all the overspending at the grocery store you may do, said Schulz. “If buying that box of brightly decorated cookies your daughter loves can help brighten her day after a difficult week of remote learning, it can be worth it,” he said. Go ahead and treat your family once in a while in these unusual times. “Just don’t do it too much or too expensively.”

How to shop smarter at the grocery store

If you’re feeling the pinch of pumped-up pandemic grocery bills, with a few practical moves, you can get back to pre-pandemic spending levels.

The bottom line? The more you plan and avoid impulse purchases, the better off you’ll be, said Schulz. Add in some coupons, watch for sales, and earn cash back, and you can maximize your grocery spend even more.

LendingTree commissioned Qualtrics to conduct an online survey of 1,052 consumers in the U.S., with the sample base proportioned to represent the overall population. The survey was fielded Sept. 18-22, 2020.

Our survey also included responses from members of Generation Z (ages 18-23) and the silent generation (ages 75 and older). Their responses were factored into the overall percentages but excluded from the generational breakdowns, due to the low sample size among both age groups.

63% of Americans Say Their Finances Have Been Impacted by Coronavirus

Nearly two-thirds of Americans are feeling the financial impact of the coronavirus pandemic, a LendingTree survey found.