Snapshots of Black and White Disparities in Income, Wealth, Savings and More

Racial disparities have always existed when it comes to finances. February is Black History Month, so our researchers updated their compilation of the most readily available data on income, wealth, savings, employment and credit to provide snapshots of economic inequality between Black and white households. Here’s what we found.

The Black and white income gap across the U.S. has remained substantial since 1970: 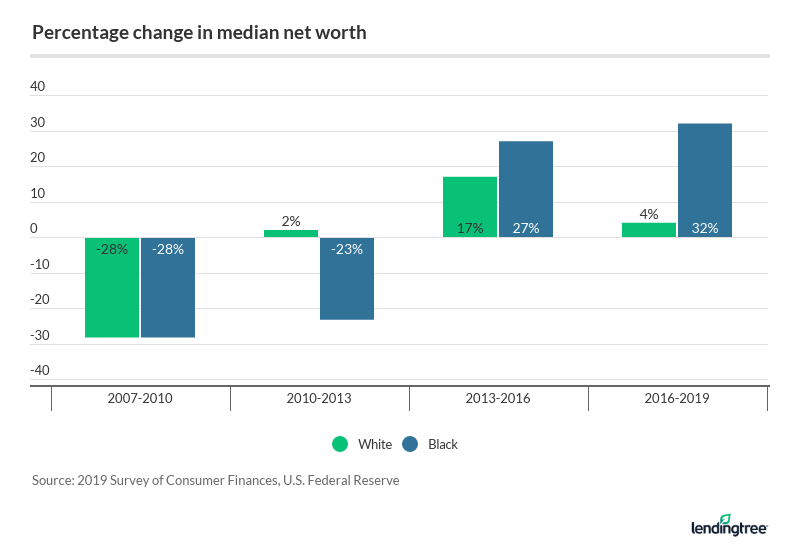 Black families’ median and average net worth in 2019 was considerably lower than that of white families:

In April 2020, 73% of Black adults surveyed said they didn’t have an emergency fund to cover three months’ worth of expenses, compared with 47% of white adults.

More than half (55%) of Black people said they or another household member suffered a loss of income between March 13, 2020, and Jan. 18, 2021, while 43% of white people said the same. Meanwhile, 1 in 3 Black respondents expect to lose employment income in the coming month, compared with just over 1 in 5 white respondents.

In 2019, 57% of Black families were denied credit or approved for less than they requested, compared with 24% of white families.

Breaking it down further: 58% of Black families making below $40,000 a year had their credit applications denied in 2019, compared with 40% of white families in the same income bracket.

Meanwhile, 86% of white families in 2019 were fully banked, but only 54% of Black families manage their finances through traditional financial services.

Tip: If you’re feeling overwhelmed by your debt and you’re unable to make on-time payments, a debt consolidation loan might be an option.