Despite Americans’ High Hopes, 2022 Financial Goals Crushed by Inflation and the Economy … but Consumers Dream of a Prosperous New Year

A new year means resolutions, with optimistic Americans committing to do better than the previous year. Goals typically involve getting healthier physically (losing weight and exercising more) or boosting one’s financial health (shedding debt, bulking up savings). And hope typically runs high. In November 2021, almost 9 in 10 financial goal-setters told MagnifyMoney they were likely to achieve their resolutions by the end of 2022.

That hope doesn’t necessarily translate into happenings, however, and the newest LendingTree survey finds that only 21% of Americans set a financial goal at the start of 2022 and achieved it. While inflation or the fledgling economy may have made it tough, Americans aren’t giving up, with 42% saying they’re setting financial goals in 2023. Will they achieve them? Time (and perhaps inflation) will tell.

Americans had high hopes for 2022, but inflation and economic uncertainty changed the result

Well, they tried. While 39% of Americans started 2022 with a financial goal, only 21% achieved it. On the bright side, however, that’s more than the 17% who made a financial resolution and didn’t achieve it. 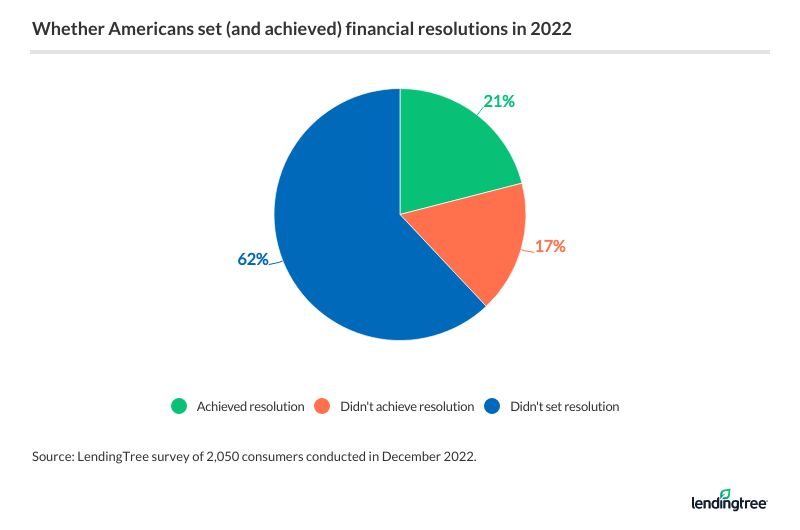 What happened to those high hopes? Inflation, according to most resolution-setters, with 74% saying it got in the way of their 2022 financial resolutions. Matt Schulz, LendingTree chief credit analyst, isn’t surprised. He says inflation touched practically every aspect of our lives in 2022 and will likely do the same in 2023.

“When the cost of seemingly everything rises by the day, it makes things much tougher for people living paycheck to paycheck or on tight budgets,” Schulz says. “It shrinks people’s financial margin for error. It makes it harder for them to build emergency funds, pay off debts and save for retirement, college, mortgages and other goals. After all, when something like a grocery or utility bill grows, you can’t just cancel it like a streaming subscription. You have to figure out a way to get that bill paid, and that often requires sacrifices. That’s what millions of Americans are currently wrestling with.”

It wasn’t all doom and monetary gloom in 2022, though. While 32% of Americans say their financial situation has worsened over the past year, 43% say it hasn’t changed and 25% say it has improved. Those in younger generations report faring better than their elders, with 41% of Gen Zers saying their financial situation improved over the past year, compared with 29% of millennials, 19% of Gen Xers and 18% of baby boomers.

Other encouraging news from 2022:

He says it’s a good sign that people are still saving the same amount or more than last year, though.

“Emergency savings are crucial to a household’s financial well-being,” Schulz says. “Without them, unexpected expenses just go on to a credit card and debt can easily start to pile up. That can be a really difficult cycle to break.”

Nearly half of Americans had financial regrets in 2022, but some still contributed to their wallets in positive ways

The biggest regrets? Spending too much and saving too little. More than one-half of respondents reported each of these as financial regrets. Other top regrets included not sticking to a budget (37%) and not paying down debt/not paying down enough debt (25%). 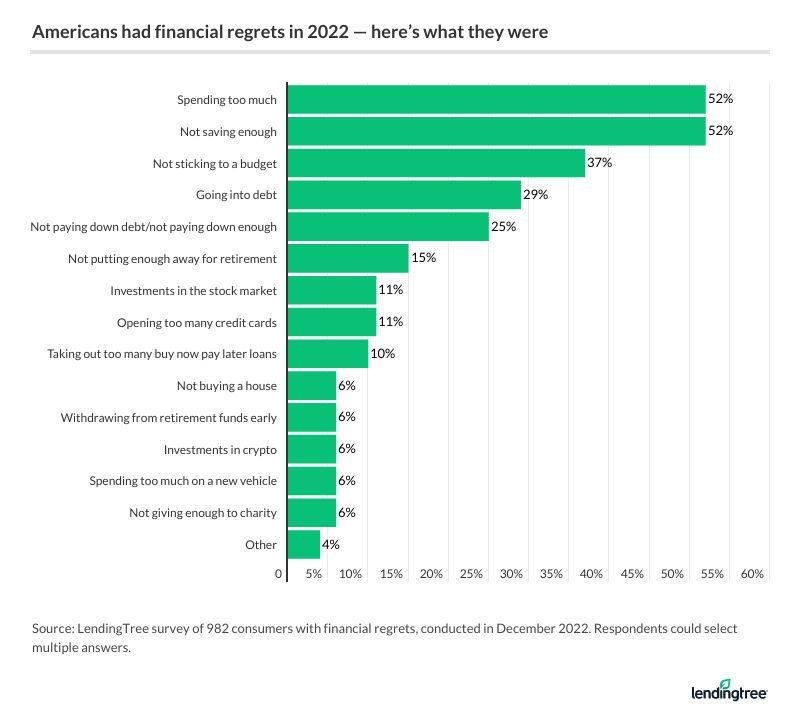 But regrets aren’t necessarily bad, as long as you learn from them.

“Everyone makes money mistakes and has financial regrets,” Schulz says. “That’s OK. It is what you learn from them and how you apply it to your life going forward that really matters.”

And while it may have been a rough year overall for financial goals, Americans still made some strides. In addition to more than half saving money and raising their credit scores as we mentioned previously, respondents also reported the following financial achievements in 2022:

Despite the challenges, Americans continue their dreams of a prosperous new year

Most aren’t deterred from a more favorable financial future either, with an optimistic 42% of respondents saying they’ll make a money/finance-related resolution for 2023.

Regarding marital status, those who’ve never been married are most likely to make financial resolutions this year (50%), compared with 41% who are married or in a domestic partnership and 34% who are divorced.

Chief among those resolutions for 2023: Saving more money (42%), increasing their credit score (32%), stopping living paycheck to paycheck (31%) and creating a budget and sticking to it (31%). 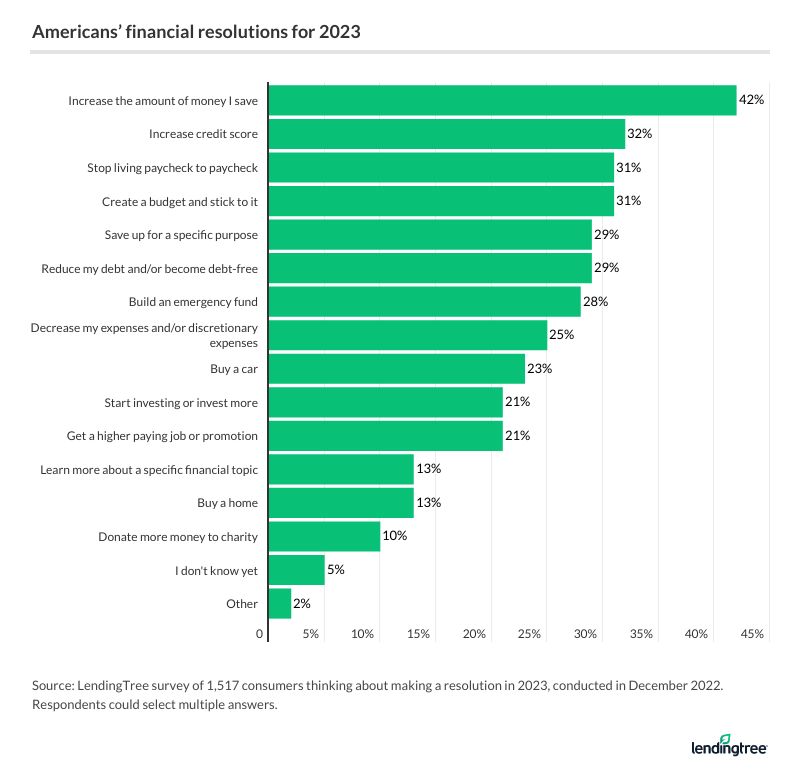 Nearly 3 in 10 of respondents report a resolution to save for a specific purpose. What type of purpose? Vacation tops the list, with 49% reporting saving for one as their goal for the year. That was followed by saving for a new vehicle (33%), a down payment for a home (29%) and retirement (20%).

As for the best way to achieve these types of goals, Schulz says high-yield savings accounts can be a great tool to help.

“All the rate hikes from the Fed in 2022 pushed savings yields to the highest levels seen in years,” he says. “You can find accounts offering returns of 4% or more, and that’s really significant, considering how paltry returns had been for so long. However, it’s important to know that the giant megabanks likely aren’t going to give you the best yields. Look for smaller online banks for the best returns.”

Will 2023 see more financial resolutions achieved? Americans are optimistic, with 87% saying they’re likely or somewhat likely to achieve their goals this year. 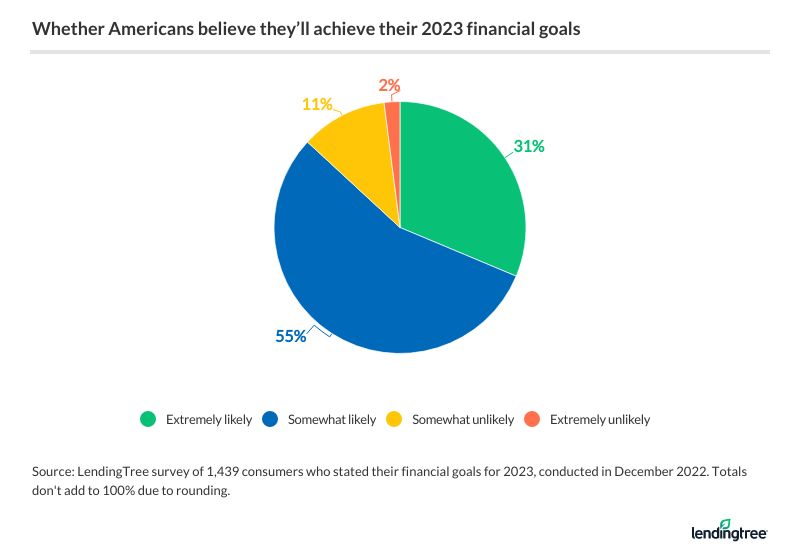 To up the odds of achieving them, Schulz suggests the SMART approach to financial goal-setting, which focuses on making goals specific, measurable, achievable, realistic and timely.

“It won’t do you much good to set nebulous goals that you can’t really track or are too easy or impossible to reach,” he says. “Those things can be annoying, frustrating and ultimately lead you to giving up. The SMART approach can help you avoid that.”

LendingTree commissioned Qualtrics to conduct an online survey of 2,050 U.S. consumers ages 18 to 76 from Dec. 16 to 19, 2022. The survey was administered using a nonprobability-based sample, and quotas were used to ensure the sample base represented the overall population. All responses were reviewed by researchers for quality control.

The fresh-start effect can be wonderful. As the new year approaches, you may think about the resolutions you want to set, including improving your finances.

Most consumers want to eliminate their debt once and for all. Read more about two debt payoff strategies: debt consolidation and debt settlement.

READ MORE
Side Hustlers on the Rise, and Nearly 70% Say They’re More Reliant on the Extra Income Due to Inflation

As inflation has soared, so has side hustling, with 44% of Americans reporting having a side hustle, up 13% from 2020.