Debt in Marriage: Managing Your Finances Together

Elyssa Kirkham is a personal finance writer who specializes in using data journalism to provide unique insights into the world of money. Her work has been featured in TIME, CBS News, MSN Money, Business Insider, Daily Finance and more.

Hogging the duvet, drinking the last of the milk, leaving the toilet seat up — couples have to put up with plenty of their partners’ annoying habits. While these examples are (mostly) innocuous, other behaviors can be more damaging to a marriage — such as fighting about money or debt.

According to a 2017 survey on divorce and debt by MagnifyMoney (a LendingTree company), one in five divorcees said money problems were the main cause of their marital split. Specifically, debt was these divorcees’ most common complaint, with 31% citing a form of debt as the biggest source of financial tension.

Addressing your debt head-on, however, can help you restore both your financial and marital security. Here’s a look at how debt can dampen marital bliss, and how couples can get past debt disagreements.

What happens to debt when you get married

Couples with debt might wonder how getting married could affect these financial obligations. Are debts combined after marriage or kept separate? Who is legally responsible to repay debt after marriage?

Fortunately, you don’t have to wonder. The rules about debt and marriage are fairly straightforward:

These rules cover most types of marital debt, but every couple’s situation is different and there can be exceptions. Look up your state’s marital property laws to see when debt is or isn’t considered shared. In the case of a separation or divorce, consult a lawyer to get clarity about your responsibility for debt held by you or your spouse.

Married with debt: Data on how debt affects couples

Dealing with debt isn’t always easy for couples to do — owing money means dealing with monthly payments, interest costs, and financial stress. Here’s a look at the statistics on how debt and marriage mix:

Why married couples clash over debt

These statistics prove how damaging debt can be to a marriage, but they don’t quite explain why. Here are some common reasons debt can be so tough on couples.

Debt can cause marital stress

Anyone with debt knows the strain monthly payments can put on a budget. Among people who worry about money, 42% say debt is a frequent concern that can cause feelings of anxiety, fear and insecurity, according to a Northwestern Mutual survey.

As debts pile up, the everyday stress of dealing with them can spill over into a couple’s relationship and contribute to or cause conflicts. One or both spouses might view debt as an obstacle that’s keeping them from moving toward a secure financial future.

Couples who struggle to communicate clearly and openly about their finances are more likely to fight about them instead. The most common form of this is failing to disclose debts to a partner as the relationship becomes more committed.

It can also extend to more serious issues, such as spending or borrowing in secret. This financial infidelity, said Andy Hill, founder of the Marriage, Kids and Money podcast and blog who repaid nearly $250,000 with his wife, “and that can almost be as bad as you know true infidelity, you know, cheating on your spouse.”

“Not only would that be a huge argument at that moment, but that could have some serious damages for the longevity of your relationship,” he added. “The trust factor can really be damaged early on.”

Debt can get too personal

“For a lot of people there many negative emotions associated with their debt,” said Talaat McNeely, who founded His & Her Money with wife Tai McNeely. “They may have feelings of guilt, shame, and in a lot of instances defeat.” In other words, debt moves beyond a matter of account balances and payments and becomes personal.

One person might feel resentful of their spouse’s debt, or feel undervalued if their concerns about debt aren’t taken seriously. At the same time, the other spouse might avoid discussing their debt or get defensive.

When debt and financial matters become loaded with these negative emotions, having a productive conversation can be hard. “Instead of being able to discuss the matter functionally, the conversation goes south,” McNeely said.

Couples often disagree about how to handle debt, said Hill.

If one spouse thinks, “‘Hey, you know, debt is just something that we have and will always have,’” he pointed out, while the other partner is feeling motivated to quickly pay it off — “That can be a sticking point in marriage.”

If a debt was taken out by just one partner (either before or after marriage), this can also cause disagreement about whether that partner should pay it off alone or if the spouse should help. When couples can’t reach a compromise, these opposing views can quickly turn into disputes over how to handle debt.

7 steps to conquering debt in a marriage 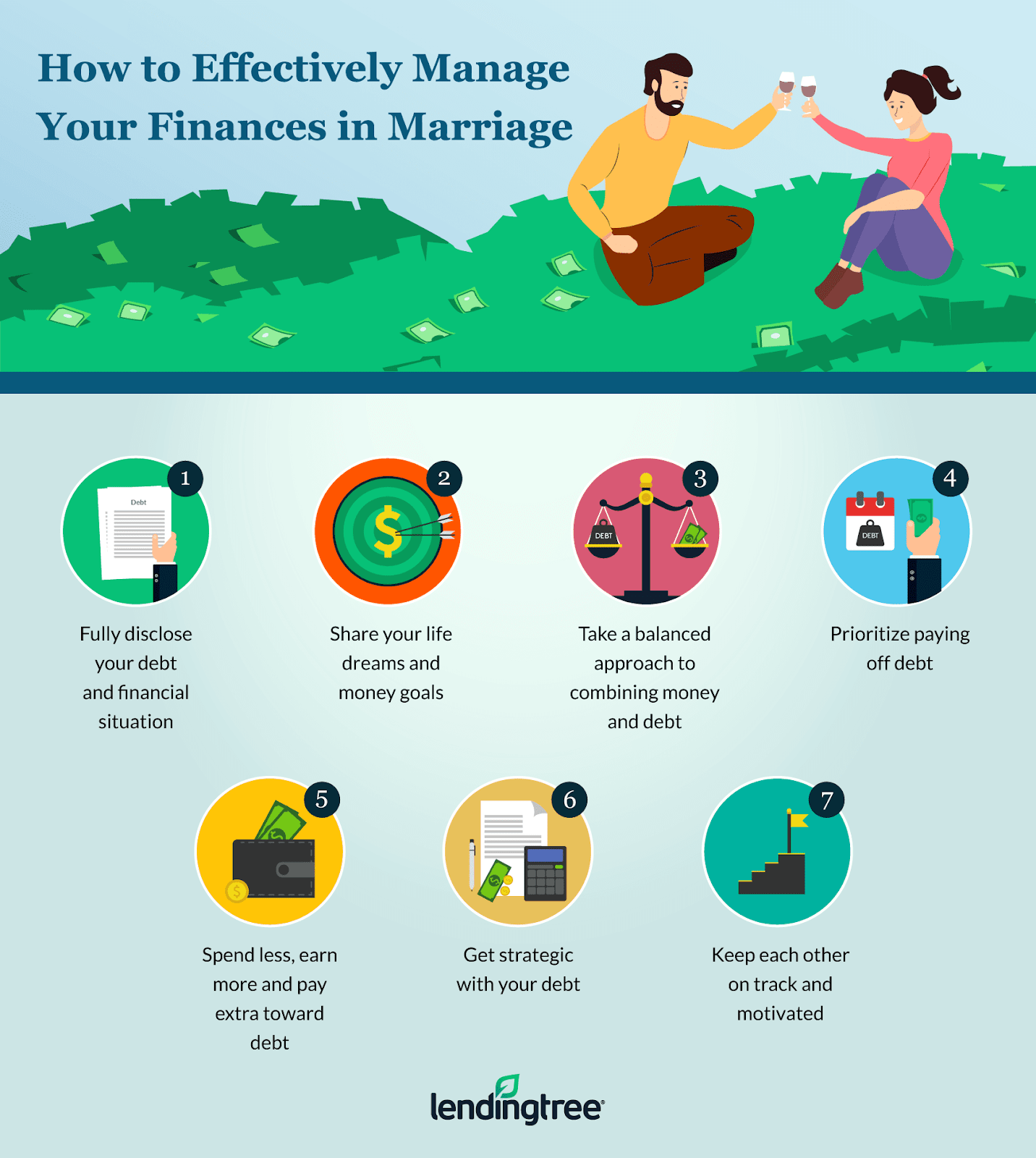 Successful couples must figure out how to effectively manage finances together — especially debt. Getting rid of debt can lift a huge burden from a marriage.

Until then, couples must manage debt stress and limit its spillover into their marriage. Here’s what couples can do to manage debt more effectively and protect their relationship from financial stress.

Before getting married, Hill and his wife opened up about all aspects their finances. Some of the kinds of questions they discussed were, “‘What do you do for a living?’ and ‘What’s your income?’” Hill also disclosed the details of his student debt and a home equity line of credit.

Couples who are considering engagement and marriage must take this vital step of getting “financially naked.” “It’s really good to know what you’re inheriting with the relationship because their debt and your debt becomes ‘our debt,’” he said.

When figuring out how to manage debt, follow McNeely’s advice: “Instead of attempting to start the conversation by only focusing on the dollars and cents of the matter, instead create a reason why such a discussion is important to your relationship.”

In other words, find the “why” you both care about — your shared vision of an ideal life together. Share what your dreams would be if the next five years of your lives could look exactly how you’d like. Write down what you each say and find those common goals you both care about.

Taking the time to find your shared dreams and goals can provide you with a vital touchpoint for you and your spouse to get aligned on what you want to do with your finances — and your lives.

3. Take a balanced approach to combining money and debt

Should you combine finances with your spouse — or keep them separate? Ultimately, “Personal finance is so personal,” Hill said, and there’s no “one right way” to manage finances as a couple — “You’ve got to find a way that will help you get to that goal, and it’s going to be different for everybody.”

Some couples will make more progress on money goals when they team up and combine finances, but others might need to maintain more financial autonomy to keep the peace. With debt, a couple might decide it’s fairer for the partner to whom the account belongs to handle it independently, or they could fully share the responsibility of paying it off — or agree on something in between.

“As long as you’re communicating fully about what’s going on, where the money’s coming from and where it’s going — you’re good,” Hill added.

As part of combining finances and making decisions together, consider how debt fits into your family’s financial goals. Decide how aggressively you want to pay off debt, and what kinds of sacrifices you’re willing (or unwilling) to make in order to do so.

When McNeely brought around $30,000 of debt into his marriage, he and Tai decided that paying it off was their top financial priority. “We were both employed and we decided to build our lifestyle based on only one of the incomes,” he said. “We sacrificed in a lot of areas and used the other income solely to get rid of our debt as fast as possible.”

The McNeelys worked as a team to manage their money and pay down debt, and eliminated the full $30,000 balance in their first year of marriage.

“If the goal is to eliminate the debt or reduce the debt there’s really only a couple ways to do it: You got to earn more and spend less,” Hill said. Sounds easy enough, but putting it into practice takes diligence:

“It might be difficult for a little while, but man, you’re going to really enjoy the debt freedom and the great partnership with your spouse along the way,” Hill said.

6. Get strategic with your debt

Employing some clever debt strategies can also help you pay off your debt faster and smarter.

Follow the debt snowball or debt avalanche method. With these strategies, you pay the minimums on all your debts and put all extra debt payments toward a single account. The snowball method targets small-balance debts first, while the debt avalanche prioritizes paying down high-interest debt.

Make extra payments until one balance is gone, and you can then roll the amount you were paying on this debt (both the minimum and extra payments) over and apply it to paying off the next debt.

Looking into debt consolidation or refinancing. These moves can help if you want to simplify your debt, lower your monthly payments, or lower the interest rates you’re paying.

You might be able to refinance your mortgage, student loans, or car loans. Or you might consolidate credit card balances or other debt with a personal loan or a balance transfer.

Taking such a step can simplify repayment and even save you money if you use consolidation or refinance to secure a lower interest rate or pay debt down faster. You and your spouse should carefully weigh your options to decide which is right for you, and shop for the right personal loan or other refinance product.

7. Keep each other on track and motivated

As you’re working together toward your shared debt repayment goals, it’s important to keep up your focus and momentum.

Meet weekly or monthly to review your finances and debts together. “Make it an untouchable date on your calendars and set up the appropriate reminders so that this time remains sacred.” McNeely advised. “It’s that important.” These meetings can help you stay focused on your goals, as well as discuss when you might need to be more flexible.

Remember your “why” and keep it top of mind. Whether it’s being able to afford an annual family vacation or allowing one spouse to cut back on hours, Hill said, use it as your motivation to keep up your momentum toward paying off debt.

“Figure out a way to make the debt payoff process fun — then both parties will join in and have a good time with it,” Hill said. One way to do this is by celebrating milestones along the way, such as popping a bottle of champagne open to celebrate your first $5,000 down. Hill also suggested finding a way to make the goal visual — such as getting a large thermometer chart and filling it in as you go.

Give yourself and your debt the credit you deserve, too. In a country that owes a collective $3.88 trillion in consumer debt, paying yours off is no small feat. As Hill pointed out, it’s powerful to be able to say “‘We are a couple that is getting rid of ours, we do not want to be a statistic. We are out of that.”