You are using an outdated browser. Please upgrade your browser to improve your experience.
Best Debt Consolidation Loans in October 2022
How Does LendingTree Get Paid?

Places Where People Spend Within Their Means

It may be easier said than done, but living within your means — that is, not spending more than you make — is paramount to financial health. Of course, that’s easier if your means are more substantial, but it’s also seemingly easier depending on where you live.

LendingTree researchers looked at the 100 largest U.S. metros to rank where it’s the easiest and the hardest for people to spend within their means. Researchers looked at debt-to-income (DTI) ratios, credit inquiries, maxed-out credit cards and spending on housing costs to create a score.

Metros where residents do better at spending within their means

Former President Calvin Coolidge once said, “There is no dignity quite so impressive and no independence quite so important as living within your means.” His words still ring true today, but some areas of the U.S. heed these words better than others.

LendingTree researchers used four metrics — debt-to-income ratios, credit inquiries, maxed-out credit cards and spending on housing costs — to calculate an indexed score for each of the top 100 U.S. metros. While San Jose, Calif. residents get an A-plus for spending within their means, the rest of the honor roll is scattered across the U.S., with Miami at the bottom of the list. 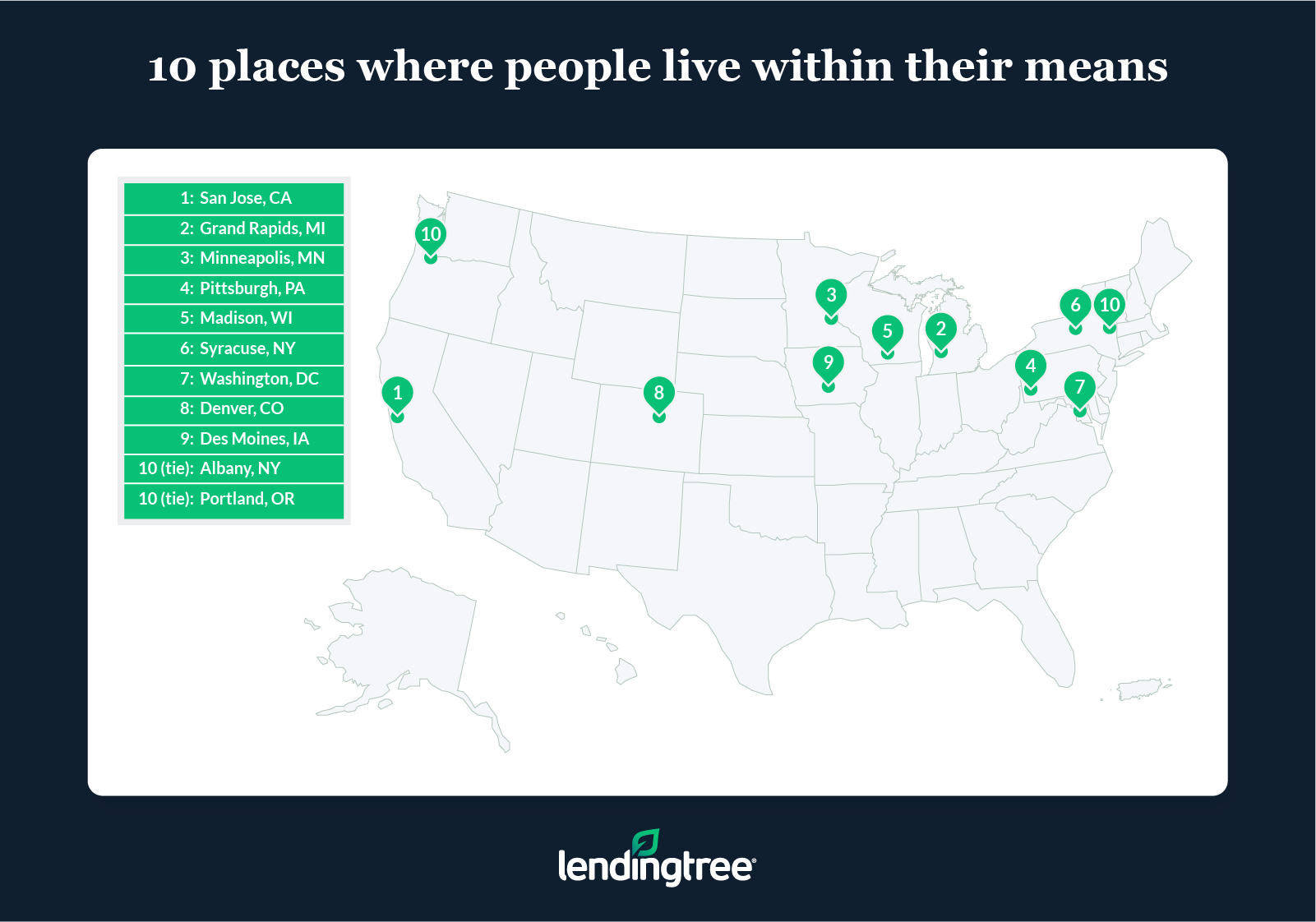 No state has more than one metro in the top 10, but the most metros — four — come from Midwestern states:

So, what did it take to score high? Well, San Jose, Calif. boasts a high average household income of $163,355, nearly double that of the $86,518 average in Miami. Household income isn’t among the four metrics researchers used to grade the places, but that kind of money sure helps.

Those at the top of the list tend to be more frugal with their spending. San Jose, Calif. has one of the lowest percentages of people with maxed-out credit cards (19.3%) among the top 10, bested only by Madison, Wis. (17.2%) and Portland, Ore. (18%). That’s significantly less than the average of 28.7% among the bottom 10 metros.

The top metros also have lower debt-to-income ratios, with no area in the top 10 having one higher than 160% (San Jose, Calif. and Syracuse, N.Y. both boast ratios of 50%). Meanwhile, some in the bottom 10 reach 260% (we’re looking at you Riverside, Calif. and Deltona, Fla.).

Metros where residents struggle at spending within their means

It’s the Southern states where it seems most difficult for people to live within their means. Floridians struggle particularly hard as the Sunshine State has five metros in the bottom 10. In addition to Miami, they include:

Two California metros — Riverside and Los Angeles — are in the bottom 10, with Virginia Beach, Va. Bridgeport, Conn., and Charleston, S.C., rounding it out. 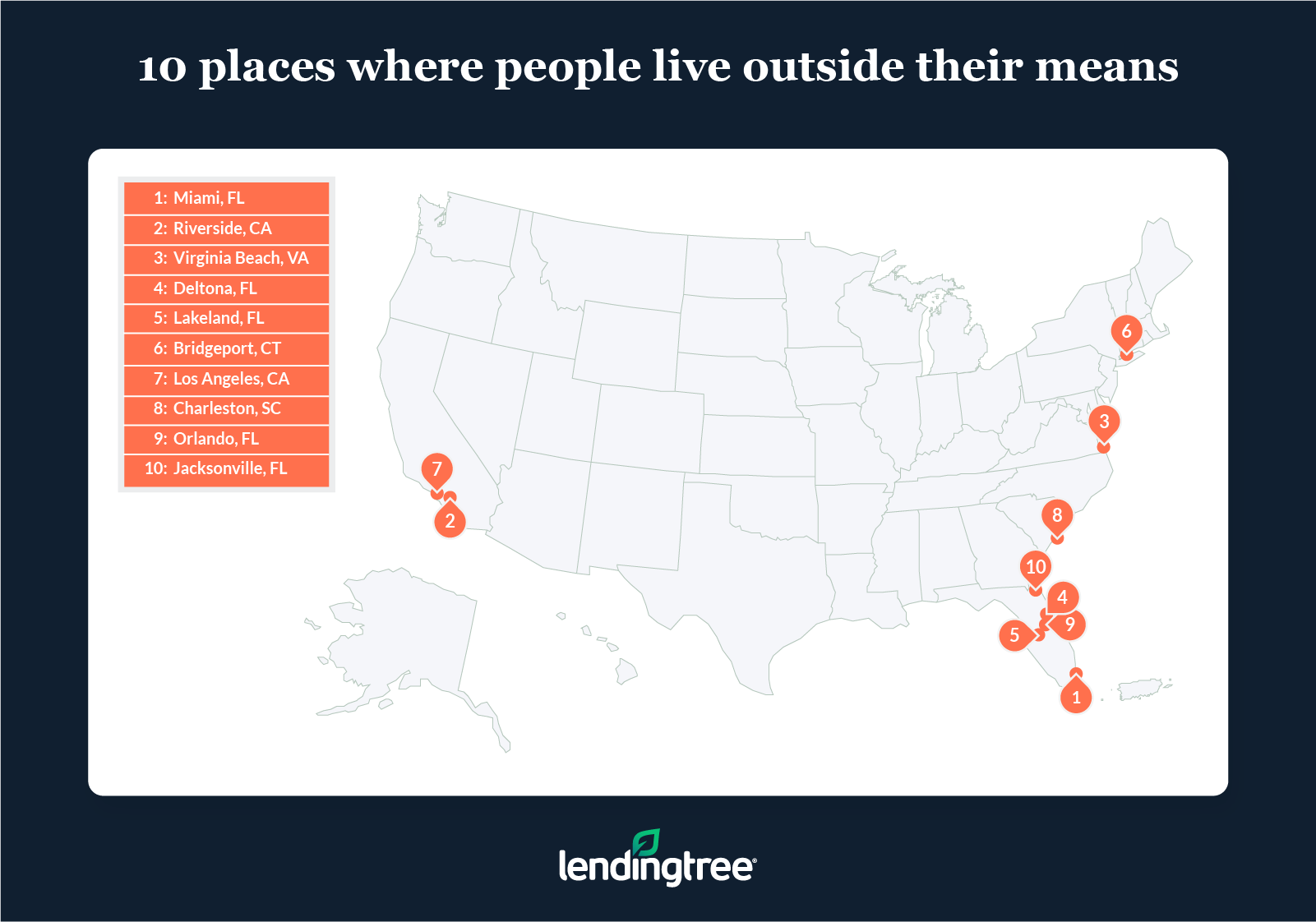 5 tips on how to live within your means

While it may be easier in some states or if you have more resources, the fact is your means are your means (if you know what we mean?), and experts stress that you must live within or even below them if you want to be financially successful.

“There’s virtually nothing more important financially than living beneath your means,” says Matt Schulz, LendingTree chief industry analyst. “Everything good that you want to accomplish with your money has to start with that. If you don’t live within your means, you won’t have money to put in your emergency fund, invest for retirement, save for college, start a small business, make a mortgage down payment or knock down your debt. If you can’t do those things, you can spend your whole life just treading water and never getting ahead.”

He offers the following tips:

1. Begin with a budget

If you don’t already have a budget, start there. It’s impossible to make a meaningful plan for handling your money if you don’t know how much is coming in and going out of your household each month. Once you have a budget, you can adjust it based on your priorities, both short and long term, and then determine what your next financial moves need to be.

“It is a game-changer, in no uncertain terms,” Schulz says.

When it comes to finding ways to save, look at any credit card debt you may have. If you’re struggling, call your card issuer and ask it to lower your card’s APR. A recent LendingTree survey showed that 83% of those who did so in the past year were successful.

“People don’t realize just how much power they have over their credit card issuer, especially if they have good credit,” Schulz says. “It may be intimidating and even a little scary to pick up the phone and ask. But if you do, it can save you real money and push you toward your goal of living beneath your means.”

In some cases, you may also want to consider a debt consolidation loan, which combines several loans into one with a (hopefully) lower APR.

3. See what you can sacrifice

While living within your means doesn’t mean you always have to deprive yourself, sometimes it does — especially if your budget is extremely tight.

“It may mean sacrificing something you like for something you love or that is more important,” Schulz says. “It’s about skipping a vacation to build your emergency fund. It’s about packing a lunch instead of dining out with friends so you can save money to put toward your debts. It’s about buying a used car instead of a new one and putting the cost difference into retirement savings.”

4. Cut yourself some slack

While budgeting and saving are important, everyone is bound to fail sometime.

“Budgeting is a bit like dieting,” Schulz says. “No one is 100% perfect in sticking to their plan, and that’s absolutely fine. You just want to make sure that you don’t go off the rails too far or too often.”

It’s important to remember that it isn’t always possible to live within your means. It should, however, always be your goal.

“The truth is that life is crazy expensive in 2021, and many Americans simply don’t make enough to get by, let alone get ahead,” Schulz says. “That traps people in a cycle of debt that just seems impossible to break.”

Living beneath your means is far easier when you have a support system of friends and loved ones to cheer for you. Schulz says that doesn’t mean you have to cut out friends who tend to spend too much or may be a bad financial influence. But the more people you have around you that understand what you’re going through and want you to succeed, the more likely you are to keep going toward your goals.

All metrics were evenly weighted to create a final score.

How to Decide Which Debts to Pay Off First

Click here to get help deciding exactly which debt to pay first, as well as strategies to help you become debt-free.

READ MORE
What Is Revolving Debt, and How Is It Different From Installment Debt?

Revolving debt is credit that you can continuously draw on, like credit cards or lines of credit. But there are some things you should know before using it.