St. Patrick’s Day observes the death of the eponymous patron saint of Ireland, but many Americans spend the holiday bar-hopping and drinking until they’re Irish. In March 2020, as the coronavirus began to spread throughout the country, many St. Patrick’s Day celebrations were canceled. One year later, and the COVID-19 pandemic is likely to put a damper on the booze-fueled holiday once again.

The bar industry hasn’t fully recovered since the coronavirus pandemic began, a new study of 30,000 My LendingTree app users found. Even in February 2021, the number of people spending money at bars was just 66% of what it was compared to February 2020, before the pandemic began. See what else we found in the analysis below.

St. Patrick’s Day festivities may be impacted again by COVID-19

Reflecting on the early days of the COVID-19 pandemic, we knew virtually nothing about how the coronavirus spread. Even though the first cases of the disease were reported in Wuhan, China, on Dec. 31, 2019, we wouldn’t have a full picture of the impact of the disease until much later.

In fact, it wasn’t really until last St. Patrick’s Day that the pandemic began to impact our day-to-day lives. On March 15, 2020, shortly before the holiday celebrations could commence, the Centers for Disease Control and Prevention (CDC) issued guidance recommending the cancellation of all events involving 50 or more people.

This reality is present in our data. The percentage of people who spent money at a bar dropped 27% from March 2019 to March 2020: 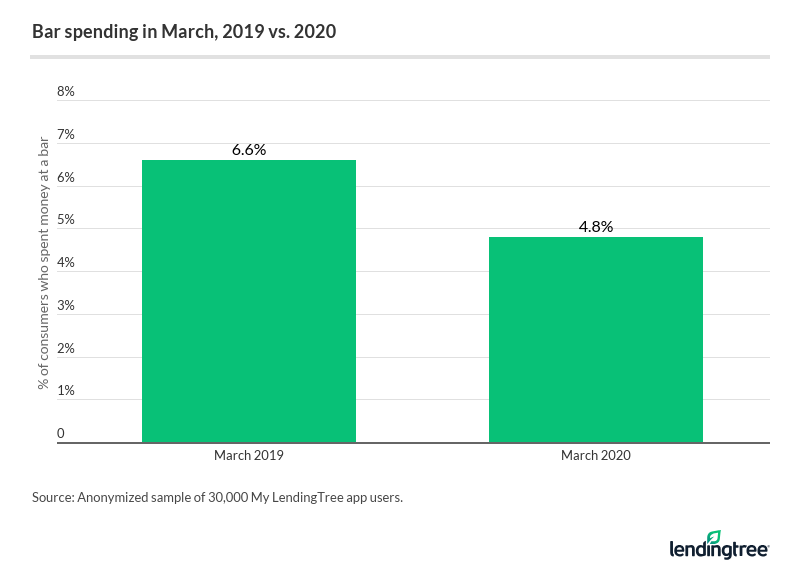 It’s evident by the activity of My LendingTree app users that people didn’t stop going to bars altogether starting in March 2020. Remember that the CDC didn’t issue its guidance until halfway through the month, and the pandemic hadn’t reached all corners of the country by then. However, bar patronage continued to drop, particularly the following month.

The pandemic effectively shut down bars when it first began

Although bar patronage was down year over year in March, it saw the sharpest drop in April 2020, when only 1.8% of consumers made a purchase at a bar — that’s compared with 6.8% the previous April.

Plus, just 0.05% of all transactions made in April 2020 took place at a bar, compared to 0.23% the year prior. See how the pandemic affected bar activity in the graph below: 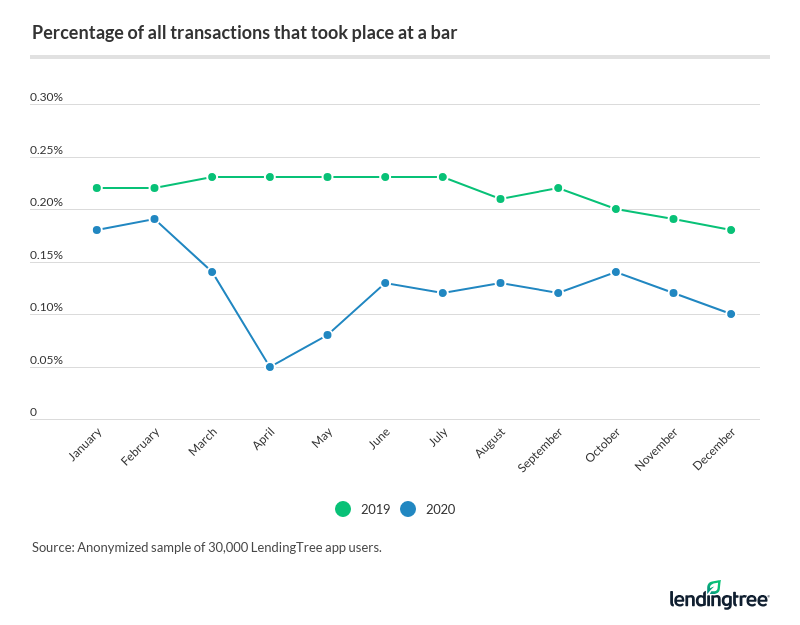 The coronavirus vaccine rollout has given many people hope that we may soon be on the other side of this pandemic, but recovery is still underway for many industries. Although bars in many states have begun to reopen, they’re only seeing a fraction of their customer base compared to pre-pandemic times, according to our data.

The line graph below shows the staggered recovery of bar patronage, and how My LendingTree app users still aren’t visiting bars at pre-pandemic levels: 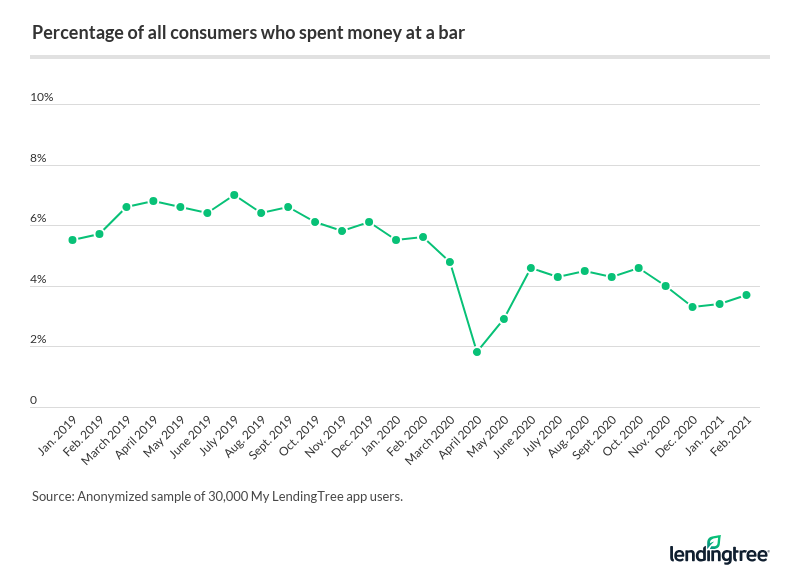 Digging deeper: The table below shows the drop in the percentage of customers who made a transaction at a bar compared with the same month of the previous year. For example, bar patronage was 56% lower in May 2020 than it was in May 2019.

How alcohol spending has changed over the years

Bar patronage is down year over year due in part to the coronavirus pandemic, but that doesn’t mean people won’t still find a way to have an alcoholic beverage or two this St. Patrick’s Day. But while going out to bars might pose too much of a risk for contracting COVID-19, Americans can still channel the luck of the Irish from the comfort of home. 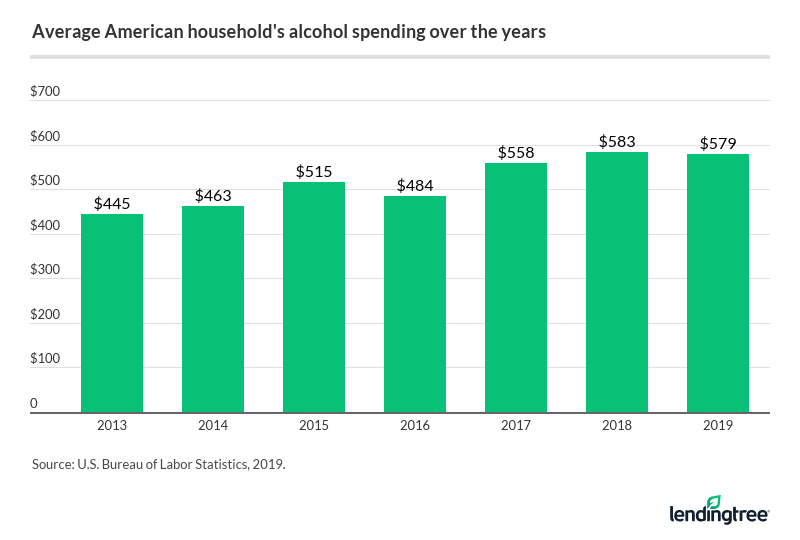 That increase roughly tracks with the increase in household income during this time. Household income as measured by the U.S. Bureau of Labor Statistics Consumer Expenditures Survey is up 27% from 2013 to 2019.

Where consumers spend the most money on alcohol

Alcohol spending is proportionally higher in some metros than it is in others. Of the 22 metro areas included in the Consumer Expenditure Survey data, San Diego spends the most on alcohol relative to their annual expenditures, which includes all expenses such as mortgage or rent, groceries, loans and debt repayment. The average household there spends $1,108 a year on alcohol, equal to 1.4% of total annual spending.

Tampa, Fla., households also dedicate 1.4% of their budget toward alcoholic beverages, though the dollar amount is just $811. Tampa’s lower cost of living and — therefore — annual expenditures explains this.

In contrast, the average household in Houston or Baltimore dedicates just 0.6% of their budget to alcohol. See how alcohol spending compares in different metro areas in the map below:

When you simply look at total dollar spending, residents of Washington, D.C., are spending the most on alcohol each year, at $1,203 as of 2019. However, because of differences in cost of living and annual expenditures, they’re actually spending less proportionally than San Diego residents, at 1.3%.