The Cost of a White Christmas: Homes in the Nation’s Snowiest States Cost Nearly $57,000 More Than Those With the Least Snow

Though a white Christmas may be on some people’s wish lists this year, it’s not on everyone’s. Some might be willing to pay a premium to live in an area that gets plenty of snow during the holiday season, while others might be open to paying a similar premium for the opposite.

LendingTree analyzed U.S. Census Bureau and National Centers for Environmental Information data to compare the cost of median-priced homes on both sides of the snow globe (well, the states that got the most — and least — snow in December 2021). 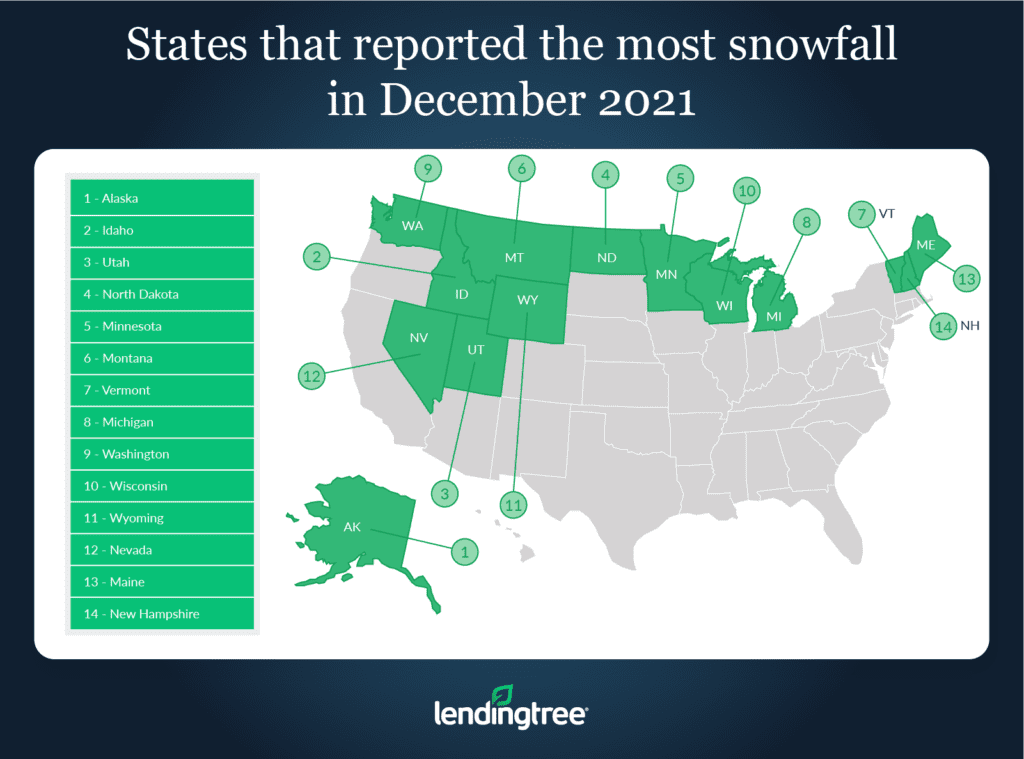 As our study illustrates — barring exceptions like Hawaii and California — buying a home in a snowy state is likely to cost more than doing so in a warmer part of the country. That said, certain factors can make living in a state that sees a lot of snow each year logistically challenging and expensive.

For example, while excessive heat can cause structural damage to a person’s home or make certain activities like going outside difficult, snow can be far more disruptive. Not only can severe cold and snow cause major home damage like burst pipes and flooding, but intense snowfall can also render travel virtually impossible. In extreme cases, being snowed in can prevent someone from important tasks like going to the grocery store or getting to a hospital for medical attention.

Due to the additional challenges from cold weather, those who live in snowy climates should plan to spend extra to ensure their homes are sufficiently weatherproofed. This can include paying for things like more expensive insulated thermal windows or purchasing backup generators in case of power outages. Residents who live with snowy seasons should also own a vehicle capable of driving in the snow. These extra costs can quickly add up and make paying for a home in a part of the country that gets a lot of snow relatively expensive, regardless of how much the home is worth.

Of course, while those who live in snowier areas will likely need to spend more money on dealing with snow, that doesn’t mean that those who live in warmer areas will never see snowfall or deal with the logistical challenges it can bring. As a result, regardless of where you live, you should be sure your home is equipped to deal with winter weather.

Tips for buying a home in a snowy state

If you can’t imagine living somewhere without an ample snow season each year, consider the following tips to make buying and owning a home in a snowy state more affordable.

Snowfall data, via the National Centers for Environmental Information, is based on the snowfall reported by Global Historical Climatology Network (GHCN) stations across a state. LendingTree calculated the total snowfall reported from Dec. 1 through Dec. 31, 2021, at each weather observation station that reported snowfall data in a given state. We then calculated the average of those totals to determine which states got the most — and least — snowfall.

Stations that reported “trace amounts” of snow were considered to have reported zero inches, while stations that didn’t report any data were excluded from average calculations.

“The housing market tends to slow down during the colder months of the year, but that doesn’t mean selling a home is impossible during the fall and winter.”

READ MORE
When is the Best Time to Buy a House?

Timing is key when you’re on the hunt for a home. Find out when the best time to buy a house is so you can score a better deal.

READ MORE
What is an HOA?

Think of a homeowners association as a small government; community board members are given authority to decide how a community should look and operate.