Fix It or List It: 72% of Homeowners Would Rather Make Home Improvements Than Sell Their House

The housing market may be hotter than ever, but most American homeowners agree: In an ideal world, they would prefer to make improvements to their homes, rather than sell them.

But amid economic turmoil, that’s easier said than done. Rising costs and shortages have impacted 64% of Americans’ home improvement plans, according to the latest LendingTree survey. Still, nearly half of homeowners plan to make home improvements this spring or summer, citing comfort as their No. 1 reason for upgrades.

In this survey, we asked more than 1,000 consumers about their home improvement wishes and plans. Keep reading to learn which upgrades Americans are making, what their budgets are and how they should consider financing their fixes.

After all, there really is no place like home.

If given a choice, 72% of homeowners say they’d rather make upgrades or renovate than sell their houses. 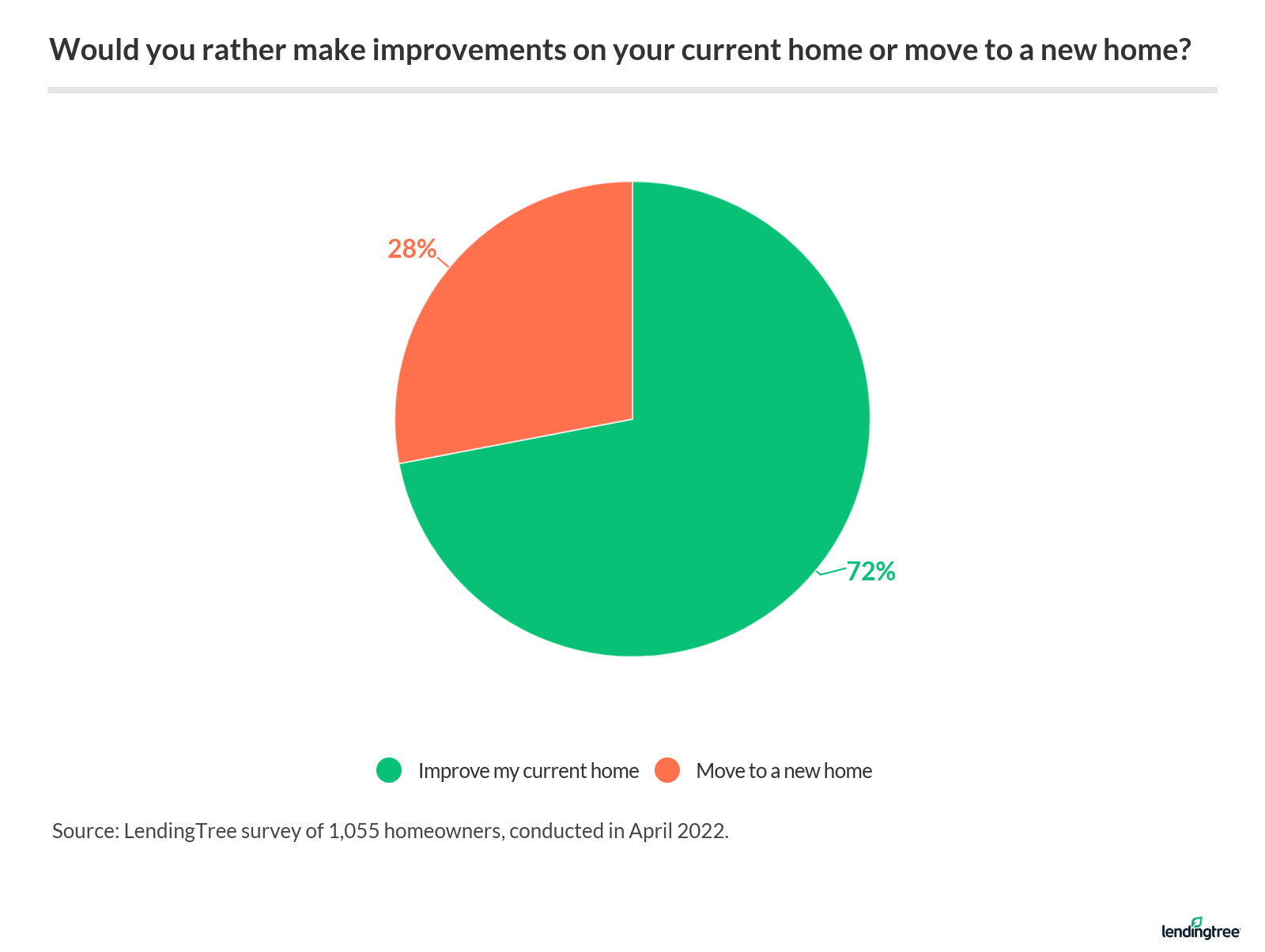 And despite recent economic instability, nearly half (48%) of homeowners do have home improvement plans this spring and summer — with an additional 34% saying they’re considering it.

Among the age groups, millennials (ages 26 to 41) are most likely to have home improvement plans. The survey finds that 60% of millennials will upgrade or renovate this spring or summer — nearly double the percentage of baby boomers (33%), who are least likely to have plans. But nothing’s set in stone: Baby boomers are most likely to be on the fence about making improvements this year, with 42% reporting they’re still considering it.

By region, more than half of Midwesterners (55%) plan to take on a spring or summer home project, followed by:

Though second to last among the yeses, Northeasterners are most on the fence about making home improvements — 39% report they might make plans this spring or summer.

Economic instability led 64% of homeowners to put off plans

While many have improvements planned for the spring or summer, homeowners have been feeling the effects of the tumultuous economy. Nearly two-thirds (64%) of homeowners say inflation and shortages have led them to put off renovations or home upgrades in some form. Rising costs was the top factor, with 36% reporting delaying their home improvement plans due to costs and 19% reporting that they can no longer afford the improvements they want to make. 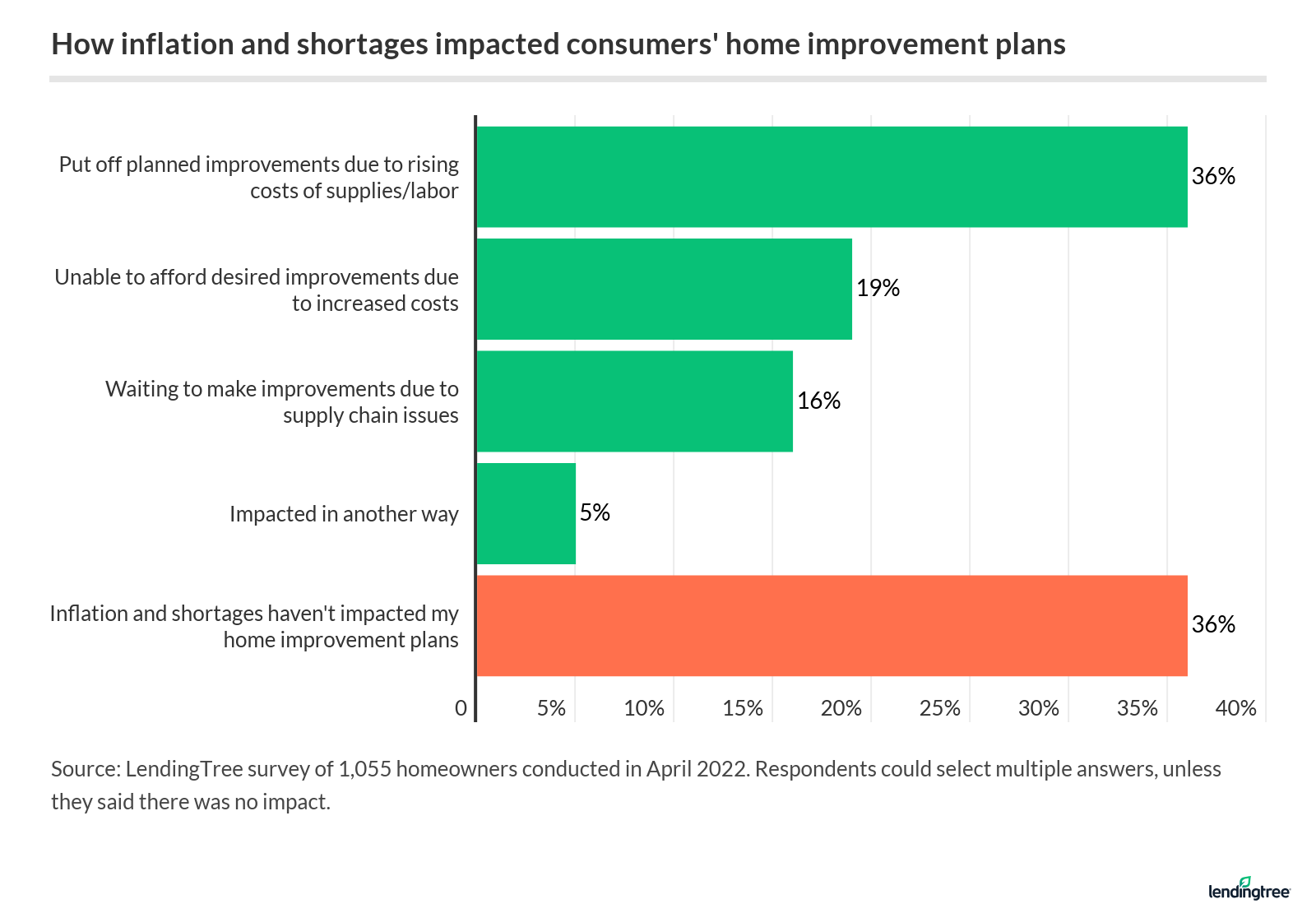 The younger generations report feeling the economy’s effects more than their older counterparts. Nearly three-fourths (72%) of millennials and 67% of Gen Xers (ages 42 to 56) say they put off home improvement plans; in comparison, just 51% of baby boomers report the same. Regionally, Westerners were least likely to be affected (59%), while Northeasterners were most likely (66%).

According to LendingTree senior economic analyst Jacob Channel, the lingering impacts of COVID-19 and the Russian invasion of Ukraine are crucial factors disrupting global supply chains — and ultimately impacting homeowners.

“These disruptions have made it considerably more expensive to ship raw materials,” Channel says. “Combined with rising labor costs, these factors have caused the cost of goods to spike significantly. As a result, anyone thinking about taking on a home equity project should first research the local prices and availability of commonly used materials, like lumber, before they decide to start renovations.”

Home improvements: Most popular vs. most desired

What homeowners want to upgrade isn’t necessarily what they’re working on this spring or summer, and cost is significant.

If money wasn’t an issue, homeowners say they’d most want to renovate their kitchens (18%), followed by upgrading their bathrooms (13%). However, just 22% of homeowners planning home improvements this spring or summer will do work in the kitchen — seventh overall in popularity.

Bathroom upgrades are the third most popular improvement homeowners are making this spring or summer, with 27% planning to do work there. By contrast, the No. 1 upgrade — interior painting, is 20 percentage points more popular at 47%.

But while costs are a key factor, Channel believes that time and inconvenience may also play a role in the discrepancy between what homeowners want and what they’re actually upgrading this summer.

“Sometimes aspects of a house — like an outdated kitchen or a bathroom that is too small — can be annoying, but that doesn’t necessarily mean that they need to be totally replaced,” Channel says. “Given how expensive and time-consuming renovations are, it often doesn’t make sense to rush into a project that isn’t really necessary.”

Why homeowners make improvements may also play a role in what’s popular this spring and summer.

More than 6 in 10 (62%) respondents with spring or summer plans say they’re upgrading to better enjoy their homes — the top reason among those surveyed. This is particularly true among homeowners with a household income of $100,000 or more (68%), Midwesterners (67%), Northeasterners (65%) and women (64%). 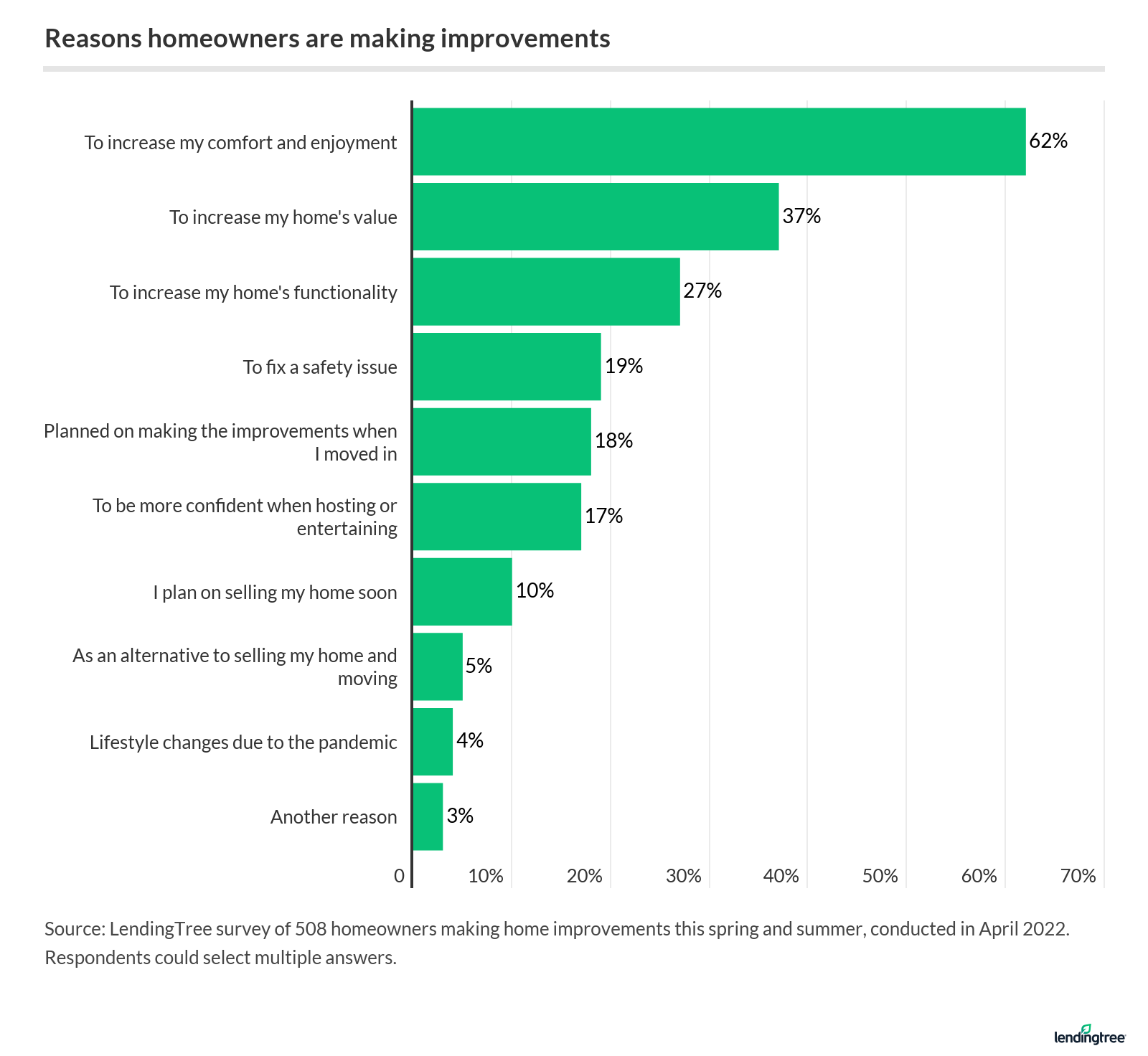 “In extreme cases, renovations that add or fix necessary components of a house like electrical systems or plumbing can significantly increase a home’s value,” Channel says. “After all, even if it isn’t in necessarily great shape, people will probably be much more willing to buy a house if it has things like a strong foundation and working plumbing and electricity.”

But in today’s housing market, Channel adds, increasing your home’s value can often be an easy fix.

“Someone looking to sell a home may not necessarily need to undertake massive renovations before listing their property,” Channel says. “In some cases, something as simple as a fresh coat of paint might be all they need.”

Most homeowners prefer a DIY approach

As labor costs continue to rise, it’s unsurprising that 77% of respondents with home improvement plans say they’ll do at least part of the work themselves — particularly as 50% say they want to keep costs below $10,000.

While 44% of respondents making home improvements say they’ll do so without professional help, it’s more preferred among the youngest generation: Millennials (53%) generally favor this do-it-yourself (DIY) approach more so than Gen Xers (39%) and baby boomers (34%).

Broken down by location and income, Westerners (49%) and homeowners making less than $35,000 annually (49%) are most likely to do all the work themselves. Meanwhile, 59% of Midwesterners plan to keep their home improvement costs under $10,000 — almost 10 percentage points higher than the average — and more than three-fourths (76%) of homeowners making less than $35,000 say the same.

A hybrid approach is also popular: 33% of homeowners with home improvement plans report they plan to do at least part of the work themselves and hire contractors for the rest. Northeasterners (41%) and homeowners with household incomes above $100,0000 (41%) are the most likely to use this method.

“Poorly done home improvements can lead to more problems down the line, costing far more money than you saved by doing it yourself initially,” Schulz says. “Also, DIY remodels might take longer than professionally done jobs. That can further ramp up the tension in what may already be a highly stressful situation.”

How homeowners are financing their renovations

While a majority of respondents planning projects will use their savings to cover home improvement costs (60%), many homeowners will use credit cards (25%) and personal loans (12%) to finance their fixes.

Millennials are more likely to use credit cards, home equity loans and cash-out refinancing to pay for home improvements than the other age groups. On the other hand, baby boomers are the most likely to use savings (62%) or cash (33%) to cover costs.

When it comes to taking on debt to finance renovations, Schulz says there’s no single option that’s better than the other.

“The best way to pay depends on the size of the project and on your own financial situation,” Schulz says. “A 0% interest credit card can be a great way to finance smaller home improvements. The possibility of having a year or more to pay off those costs interest-free is a really big deal. A low-interest personal loan can be a good choice as well.”

Given how much home prices have risen over the past two years, Schulz adds that home equity loans or home equity lines of credit (HELOCs) can be especially good options right now. However, he adds, homeowners should be adequately prepared for the risks of both — particularly as homeowners may lose their homes if they’re unable to pay. A home improvement loan, which doesn’t require collateral, may be a more affordable option for homeowners who don’t want to put their houses on the line.

Regardless of the method, Schulz cautions homeowners against taking out debt without first ensuring that they’ll be able to pay it off. However, he adds the benefits of financing a home improvement are often worth it for prepared homeowners.

“The truth is that a home remodel done wisely can definitely be worth the risk,” Schulz says. “Those improvements can add far more to the value of your home than they cost. In today’s market, that’s a significant thing.”

LendingTree commissioned Qualtrics to conduct an online survey of 1,055 U.S. homeowners ages 18 to 76, fielded April 9-25, 2022. The survey was administered using a nonprobability-based sample, and quotas were used to ensure the sample base represented the overall population. All responses were reviewed by researchers for quality control.

While the survey also included homeowners from Generation Z (those 18 to 25), the sample size was too small to include findings related to that group in the generational breakdowns.

Fix It or List It: 72% of Homeowners Would Rather Make Home Improvements Than Sell Their House

In an ideal world, 72% of homeowners would rather make home improvements than sell their houses, according to the latest LendingTree survey.