Many borrowers are having a hard time repaying their federal student loans — and the government and its collection agencies are having an even harder time recouping this outstanding debt.

In the third quarter of last year, for example, less than 2% of federal loans in collections were recovered — just $2.6 billion out of $166 billion.

Unfortunately for delinquent borrowers, however, the Department of Education (DoED) is increasingly leaning on one of its more feared methods of collection: Dreaded wage garnishment is on the rise.

From July 2015 to September 2018 — the period reviewed in this study — debt collectors nabbed $2.3 billion in wage garnishments, according to DoED data. And after a dip in mid-2017, garnishments rose to a record high for the three-year period studied, hitting $230 million in the third quarter of 2018.

Here’s a summary of the current state of student loan-related wage garnishment.

How much federal student loan debt is in collections?

Although the time it takes for private student loans to enter collections varies by individual lender, there’s single rule when it comes to federal loans: Miss one payment and you’re officially delinquent. Fail to make a payment for at least 270 consecutive days, and now you’re in default.

Once in default, a federal loan balance accelerates (or becomes due in full). Without arranging to make good on the debt, it could then land with a collection agency.

The 18 private collection agencies contracted by the DoED took on $171 billion in defaulted student loans over the last three years for which data is available.

How much loan debt facing collections is being recouped

Within five days of the first contact, collection agencies are required by the Fair Debt Collection Practices Act to provide borrowers with a validation notice that details:

From 2015 to 2018, the government’s collection agencies retrieved about $31 billion, but debt collectors aren’t so successful in general. Although the dollar amount of recoveries has increased over the last three years, the percentage of outstanding debt that has been recovered quarterly dropped from about 3% to 2%.

Percentage of Student Loans in Collections Recovered in Q3 2018

91% of recouped money happens through cooperation with borrowers

When a student loan borrower’s federal education debt enters default status (and is potentially placed with a collections agency), they have three ways to get their loans current again. They can:

Of the two more realistic routes to escaping default and collections, rehabilitation takes six to seven months’ more time to complete than consolidation. Despite the long road to rehabilitation, however, it accounted for 74% of agencies’ debt recoveries — or $23 billion worth — during the 2015-18 period.

The clear majority in favor of rehabilitation is likely due to the greater reward it carries: removing the record of a default from the borrower’s credit report.

Consolidation, which doesn’t offer the same credit improvement, accounted for 14% of debt recoveries. Another 5.4% came from borrowers making voluntary payments to catch up on their debt. 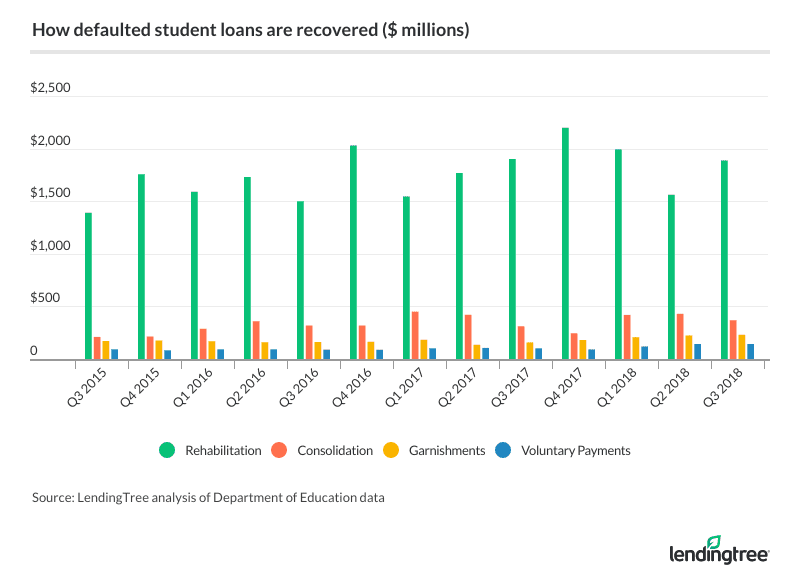 Involuntary wage garnishment is on the rise

When a distressed borrower doesn’t rehabilitate, consolidate or otherwise catch up on their federal loan debt (or is slow to do so), it’s the agency who acts first.

As empowered by the DoED, collection agencies could collect on your debt by withholding up to 15% of your income, as well as your tax refund, Social Security or other federally administered benefits.

According to our three-year analysis, 8% of loans in default — or $2.3 billion worth — were recouped through these involuntary wage garnishments. 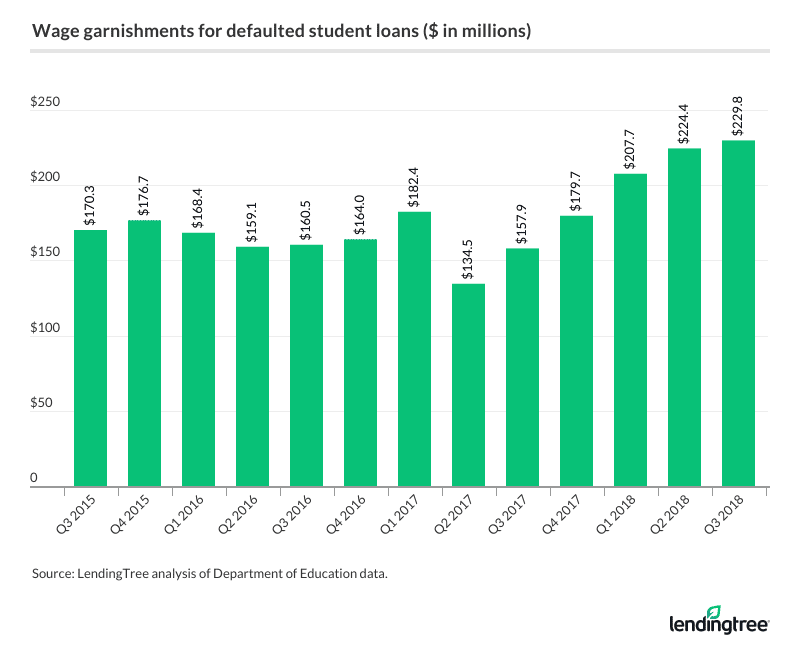 If your debt is in collections or could be soon …

Almost 12% of America’s private and federal education debt is at least 90 days delinquent or in default, according to our student loan statistics. So if you find yourself on the precipice of a dire debt situation, at least know that you’re not alone.

Here are some possible solutions for your debt troubles, based on the current status of your federal student loans:

For private student loans that are anywhere from past due to facing collections, consult your lender immediately. Their safety net might not be as wide as what’s offered by the DoED. Still, something as simple as an economic hardship forbearance program could allow you to pause your payments and get back on track.

Applying these remedies can help you keep pace with your loan repayment. Then you can avoid becoming a statistic, as the DoED and its debt collectors ramp up their use of wage garnishment.

Plus, once you’ve had a chance to catch your breath, you can start to explore permanent solutions for your student debt. Review your eligibility for student loan forgiveness for your federal loans. Also, keep student loan refinancing under consideration for your federal and private debt, since it’s generally the only way to reduce your interest rate, potentially saving you a bundle on your repayment.

How Much a College Credit Hour Costs

Students can pay anywhere from $0 to more than $1,500 per college credit hour, according to an analysis from LendingTree researchers.

READ MORE
Your Guide to Federal Financial Aid, the FAFSA and More

Federal financial aid is key for many students to pay for college. Find out how to get federal student financial aid, fill out the FAFSA, and more.

You need a student loan to pay for college, but how do you get one with bad credit? Check out these tips to use when looking for bad credit student loans.