Electric vehicle registrations have jumped by no less than 23.1% over the past four years, according to the latest data via the U.S. Department of Energy Alternative Fuels Data Center.

With gas prices all over the place, electric and hybrid vehicles have become both environmentally conscious and good for the wallet. However, Americans’ increasing love of large vehicles — to the tune of trucks gaining 57.2% of the market share — means that more electric trucks and SUVs can’t come fast enough.

The latest LendingTree study analyzes federal data to show the states where electric vehicles are most popular and what models are best-sellers, among other things.

Here’s a year-by-year breakdown of the percentage change in registrations by fuel type: 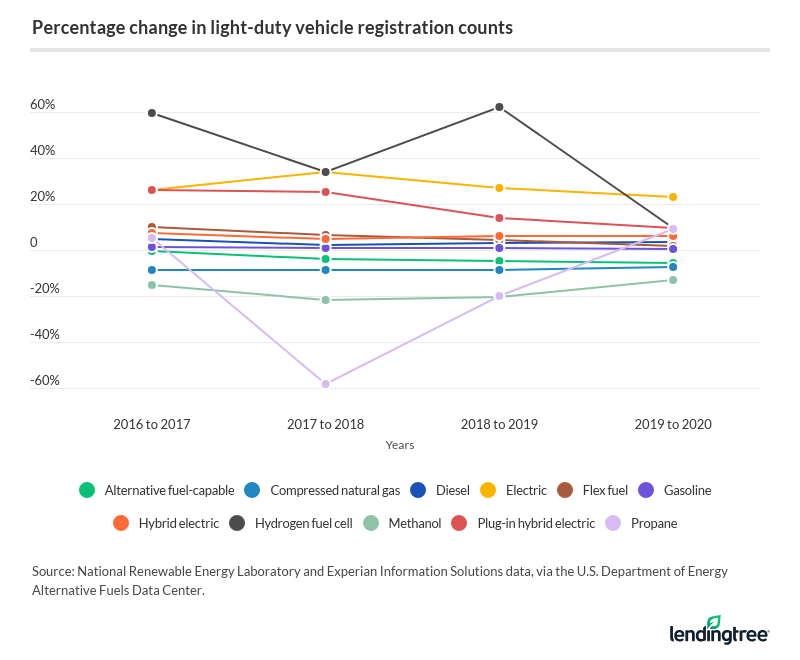 Gas vehicle registrations haven’t grown by more than 1.1% since 2016. But it’s harder to see a dramatic change here as more than 274 million gas vehicles are registered, versus the nearly 1.5 million with alternative power sources.

This fluctuation happened in part due to financial incentives offered by governments and because there is only a small base of hydrogen-powered vehicles, meaning any change is big. In February 2019, there were about 6,500 in use, compared with the nearly 276.5 million vehicles registered in total that year.

Contributing to their rarity: You can buy or lease these cars only in states with hydrogen refueling stations — California and Hawaii.

Just more than 1% — 1.4%, to be exact — of vehicles registered in the U.S. are electric, according to a LendingTree analysis of data via the Alternative Fuels Data Center. Bringing the average up are three of the westernmost states: California (4.0%), Hawaii (3.0%) and Washington (2.4%).

Residents in those three states face some of the highest gas prices in the nation, with California leading at $5.54 a gallon as of Aug. 4, 2022. That’s $1.40 more a gallon than the national average of $4.14. The five states with the lowest percentage of electric vehicle (EV) registrations — all at 0.2% — had average gas prices of $4.24 a gallon or less. Gas prices contributed to a recent LendingTree study that determined the best and worst states to own an EV.

California plans to use EVs to help its power grid. With the right equipment, EVs can charge from the power grid — and give it back. A car could serve as a backup source during peak energy use, alleviating demand on bigger infrastructure.

Here’s a look at the share of electric vehicles by state:

Tesla Model 3s are the best-selling EVs by far

Tesla Model 3s commanded 38.7% of new EV purchases in 2018 and 47.4% in 2019, according to an analysis of data via the Alternative Fuels Data Center. Despite being introduced in 2017, the Model 3 has accounted for 20.5% of all EV sales since 2011. Its huge demand makes it the only EV model with a depreciation rate better than gas-powered vehicles. 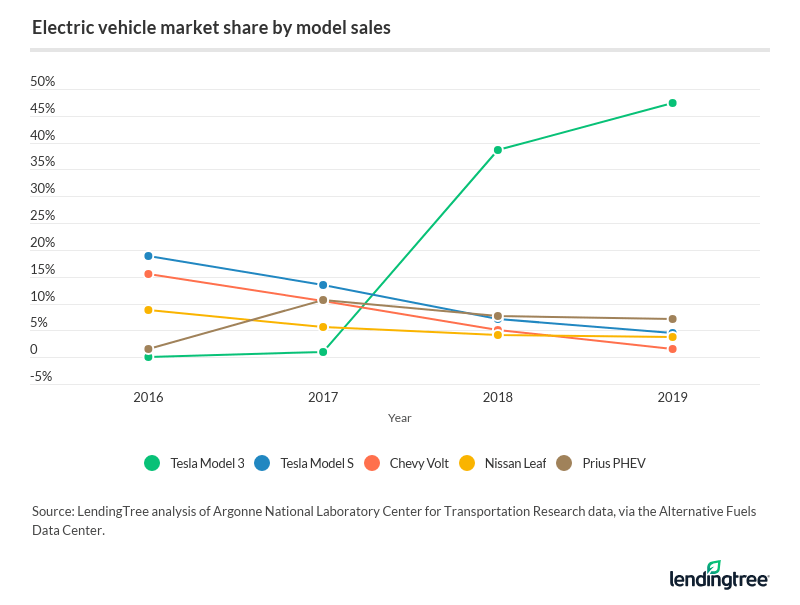 Other top models, including the Tesla Model S, Chevy Volt, Nissan Leaf and Prius PHEV, saw declining market shares. But this is a snapshot of the EV market only. In the larger picture, each model must compete with other EVs and transportation options, including hybrids. If you’re tempted by the most popular EV, here’s a Tesla financing review.

How “green” are EVs? If your home outlet is powered by nonrenewable resources, you may wonder whether an EV helps the environment. Power plants are generally more efficient than a single vehicle engine, so the likely answer is that an EV is still more green.

Hybrid cars are making a comeback

Gas stations are everywhere, but charging infrastructure is still in the works. That means hybrids offer some benefits of going electric — along with a gas-fueled safety net.

Environmental benefits from some drivers going green are somewhat negated by America’s growing use of large vehicles. American drivers have always shown love to big cars — the best-selling vehicle in the U.S. for the past 40 consecutive years has been the Ford F-Series pickup truck — but this affection is becoming more potent. 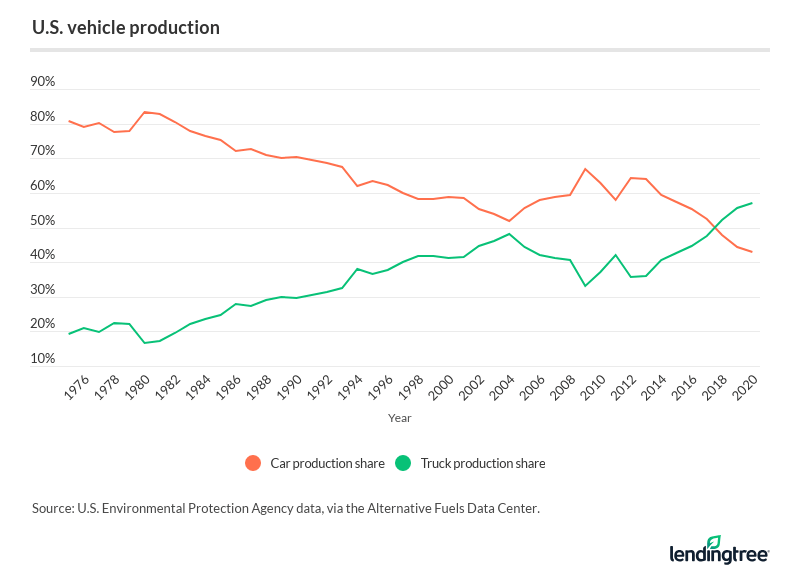 Some good news is that established and new automakers are starting to produce more EV trucks and SUVs. The Ford Lightning, Rivian R1T and Tesla Model Y are popular models.

To explore how demand for electric cars has changed over time, LendingTree researchers analyzed data via the U.S. Department of Energy Alternative Fuels Data Center.

Best and Worst States to Own an Electric Vehicle

The U.S. automotive industry and federal agencies have committed to long-term investments in electric vehicles and the infrastructure to support them.

With gas prices near record highs, answering the call of the open road in an electric vehicle is much less expensive, but you’ll need to plan.

READ MORE
BMW Is Most Popular Luxury Vehicle, but Tesla Is Catching Up

Of all luxury auto loan queries, 17.5% are for BMWs and 14.4% are for Teslas. However, the two most popular car models are Teslas.