You are using an outdated browser. Please upgrade your browser to improve your experience.
Business Loans
How Does LendingTree Get Paid?

Demographics of Business Owners in Hardest-Hit Industries During Coronavirus Pandemic

Young entrepreneurs are disproportionately suffering in the U.S. industries hardest hit by the coronavirus pandemic.

LendingTree researchers found that 45% of businesses with owners younger than 25 years old are in industries with unemployment rates higher than the national average of 13% in May. That figure jumps to nearly 47% for business owners between the ages of 25 and 34.

These hardest-hit sectors make up 40% of all businesses in the U.S. Many of these nonessential businesses closed their doors at some point in recent months to obey government mandates meant to limit the spread of the coronavirus. Most are reopening — as of this writing, about eight in 10 businesses in the U.S. are fully or partially open as local authorities ease restrictions.

Although the majority of business owners across all industries are 45 years old and older, those who are younger tend to work in industries where unemployment rates are high. 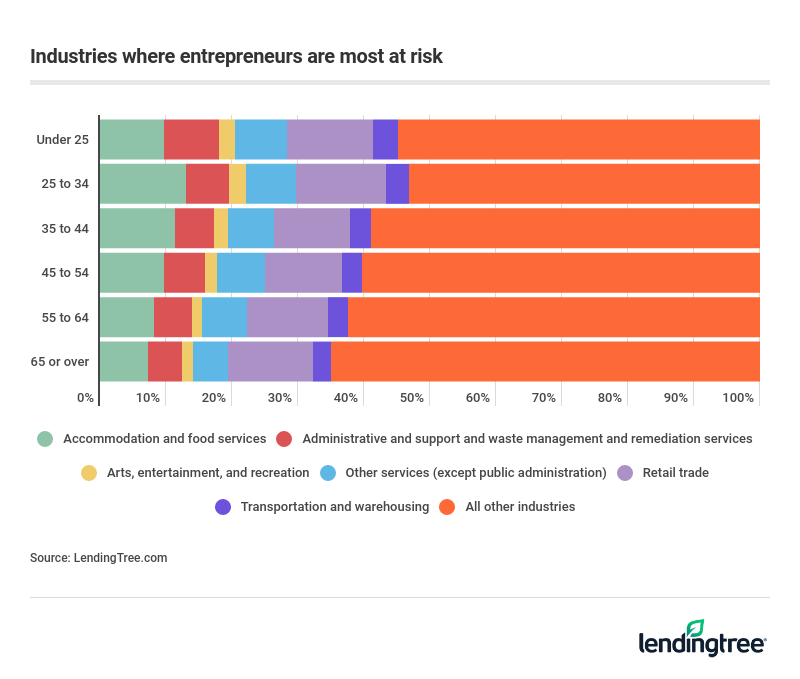 White business owners dominate the racial demographics of all industries. But minority groups have a relatively large presence in at-risk industries.

In industries with above-average unemployment rates, Asian business owners are the most prevalent of all minority groups represented. More than half of all Asian-owned businesses operate in vulnerable industries. 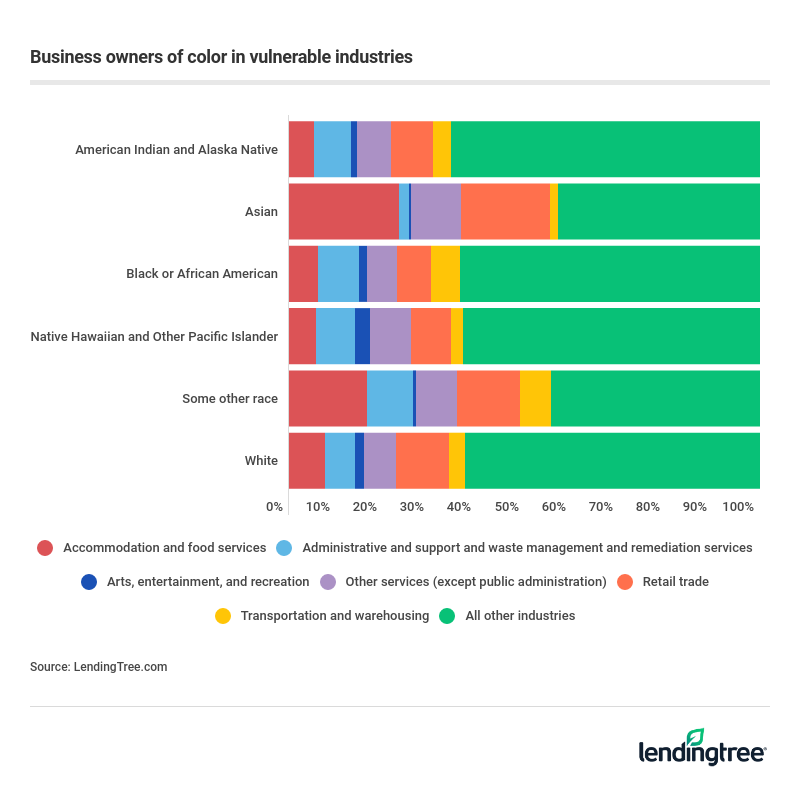 How other business owners of color are facing similar risks

Asian business owners are most likely to operate in accommodation and food services, as 23% of Asian-owned ventures are in this sector. Business owners who identify as “some other race” are the next most vulnerable group, as nearly 56% of entrepreneurs in this demographic work in industries with unemployment rates exceeding 13%. Additionally, 36% of black or African-American business owners operate in high-risk sectors.

Where marginalized communities can find help

Despite operating in hard-hit industries, business owners of color may have been shut out of federal aid programs intended to help small businesses survive the coronavirus pandemic. A report from the U.S. Small Business Administration found that lenders participating in the Paycheck Protection Program (PPP) may not have prioritized underserved markets, including minority groups, as initially instructed.

In response to the criticism, the SBA announced on May 28 that it would set aside $10 billion of PPP funding for Community Development Financial Institutions. CDFIs are lenders designed to serve disadvantaged communities. New legislation signed into law in June is also designed to make it easier for business owners to obtain PPP forgiveness. The Federal Reserve is also preparing to roll out its new Main Street Lending Program.

Demographics of Business Owners in Hardest-Hit Industries During Coronavirus Pandemic

Researchers found that 45% of businesses with owners younger than 25 are in industries with unemployment rates higher than the national average.