Nearly 1 in 5 U.S. businesses fail within the first year, according to the latest data from the U.S. Bureau of Labor Statistics (BLS). With 32.5 million small businesses across the nation, some are undoubtedly bound to fail, whether small or large.

Businesses can falter for various reasons, including financial constraints, workforce issues and owner burnout. Plus, the percentage of businesses that fail can vary widely based on the state or industry, according to the latest LendingTree analysis.

If you’re considering starting a business, take a look at the following business failure rates to be sure not to add yours to that statistic.

Percentage of businesses that fail in the U.S.

The business failure rate in the U.S. within the first year is nearly 20% — 18.4%, to be exact — according to a LendingTree analysis of BLS data. (All one-year data examines the March 2021 status of businesses that opened a year earlier in March 2020.) Here are further statistics, based on BLS data, on how businesses fare over their first 10 years.

Business failure rate across the U.S.

(All five-year data examines the March 2021 status of businesses that opened five years earlier in March 2016, while the 10-year data compares March 2021 and March 2011.)

The one-year look examines businesses that opened the month (March 2020) that the World Health Organization declared COVID-19 outbreaks a pandemic. Despite Americans opening these businesses amid the start of the crisis, they fared better than people who began one the year before. In fact, the business failure rate in March 2020 for businesses that opened a year earlier (in March 2019) was 21.6% — more than three percentage points higher.

Thirty-one states and the District of Columbia have a higher percentage of businesses that fail in the first year than the nationwide rate of 18.4%. Hawaii tops that list at 25.4%, followed by D.C. (25.1%) and Kansas (23.2%).

Here’s a look at the one-year, five-year and 10-year business failure rates by state:

Business failure rate across the 50 states and D.C.


Source: LendingTree analysis of U.S. Bureau of Labor Statistics data
An October 2021 LendingTree study found that North Carolina offers the best places to start a small business. Given the state’s lower-than-average business failure rate, that could be even more incentive for people in the Tar Heel State.

Industries with the worst survival rates

If you’ve considered starting a small business in mining, quarrying and oil and gas extraction, you might want to reconsider.

This industry — which includes mining and geological engineers, first-line supervisors and extraction workers — has the highest business failure rate within one year, at 25.6%.

The other industries that rank the worst include:

Unlike in the state-by-state look, the mining, quarrying and oil and gas extraction industry also has the worst business failure rates after five years and 10 years.

Here’s a look at the one-year, five-year and 10-year business failure rates by industry:

That means the following industries have the smallest business failure rates:

Real estate and rental and leasing has the best survival rate within one year, but it isn’t after five years and 10 years. Instead, the field of agriculture, forestry, fishing and hunting rises to the top over those time spans.

Why do startups fail?

There are many reasons why new businesses fail, such as misreading the market, hiring the wrong people and facing legal challenges. Research firm CB Insights highlights the top reasons startups fail — here’s a closer look.

Managing money is a stumbling block for many new businesses. According to CB Insights, 38% of failed startups point to running out of cash and not being able to raise new capital as the central issue.

Insufficient cash flowing in and out of the business can be a result of a lack of product-market fit, failure to capitalize on opportunities or hesitation in seeking capital.

Many businesses operate on lean margins, which leaves little room for financial error. Success can depend on figuring out how to run efficiently to build a cushion and acquire some security and flexibility.

“I put a tremendous emphasis on cash flow and having a solid financial platform,” says Tom Raymond, a SCORE mentor in Detroit. “Most startups don’t even know what an Excel spreadsheet is.”

According to a May 2021 LendingTree survey, 25% of Americans thought about opening a business in the past year — a timeline that generally aligns with the period examined by the BLS. Among those who thought about doing so, 40% said they didn’t have enough money, so most prospective business owners know this is a top issue before starting. 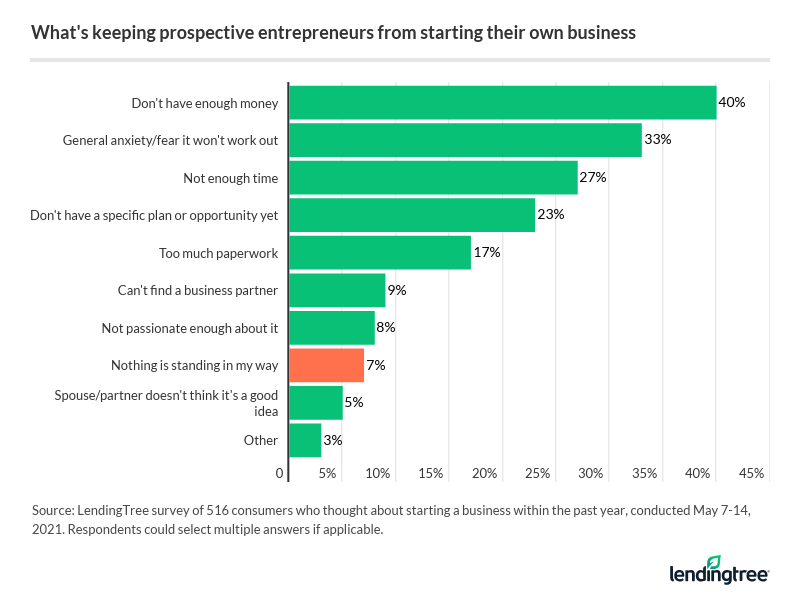 2. Lack of demand for the product or service

A similar percentage — 35% — of startups fail because people don’t need or want what they’re selling, according to CB Insights. This means that assessing the potential market is essential to ensure success.

Figuring out if there’s a market for your product or service requires talking to potential customers to understand their problems and needs. It’s a mistake to assume you know their pain points or that your product will be attractive simply because it’s an advancement in your field.

3. Not researching the competition

It’s essential to investigate who else is trying to fill your target audience’s needs. Neglecting to look critically at the competition is cited as a reason for failure by 20% of startups that fold.

A sector with other entrants indicates there’s a true market need that businesses are competing to meet. But a crowded field or a sector with extremely well-funded and experienced competitors will be more difficult to enter successfully than a more sparsely populated one. Either way, businesses with a unique value proposition will be most successful in edging out others for customers’ attention.

Employees can be a company’s most important resource, so hiring the wrong ones or creating the wrong positions just about guarantees major problems. Nearly 1 in 7 (14%) failed businesses cite having the wrong team as a primary reason their business folded.

In some cases, founders have a desire to do everything themselves, despite lacking the capabilities or skills for certain tasks. In other cases, they want to hire their friends or relatives over more experienced or more suitable people. Some businesses fail because leadership positions are misaligned, the staff lacks diversity or the board is mismanaged.

Here’s the full list of the top reasons startups fail, from CB Insights:

It’s interesting to see burnout and passion at the bottom — our May 2021 LendingTree survey found that among those considering starting a business, wanting more purpose or passion is at the top of the list. 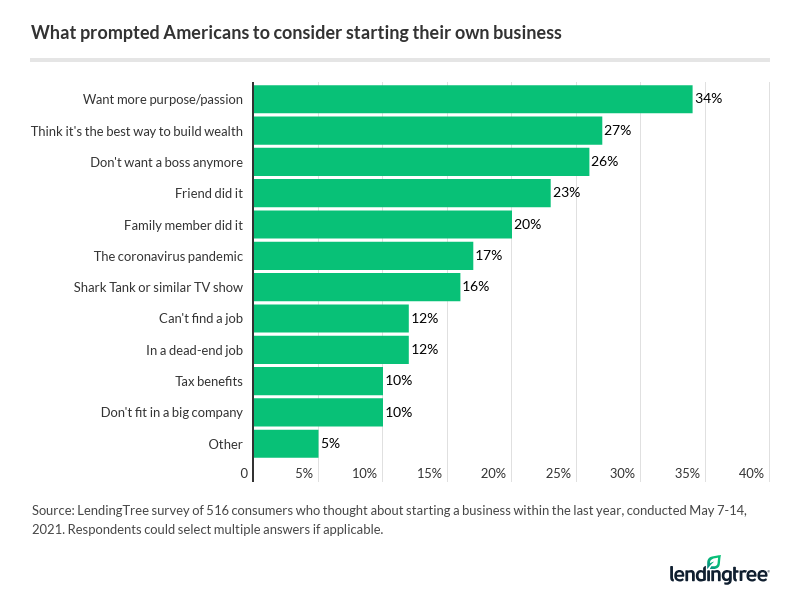 How to succeed in your first year of business

Fortunately, not every business is destined for failure. Here are some tips on how you can succeed in your first year of business.

All too often, business owners forgo a business plan. They have big ideas and jump right in before gaining a thorough understanding of what their business can offer.

Raymond, the SCORE mentor, helps new business owners make “short and sweet” business plans that include an executive summary, a description of the business’s goals and objectives, a marketing plan, an operations plan, a management plan and a financial plan.

“The written business plan and the financial plan — the cash flow projections — are extremely vital to getting started,” Raymond says. “The rest of the stuff kind of falls in line if you have a solid set of goals and objectives and a good, solid financial platform to move your business forward.”

There’s a lot of funding available for startups, but it’s generally only accessible to those with decent personal credit. Raymond advises business owners to obtain free personal credit reports from Experian, Equifax and TransUnion via AnnualCreditReport.com to find ways to improve their scores. Review your reports and notify the credit bureaus of any mistakes.

In addition, immediately contact any creditors with which you are delinquent and seek arrangements for repayment. Get those credit arrangements in writing, send copies to each credit bureau and follow them diligently.

Every new business owner has some startup costs — but if you’re not careful, you might end up writing more checks than you’re bringing in. Cut costs wherever you can and find ways to make your operations as efficient as possible to keep spending low.

If you stay focused on that goal and on satisfying your customers, you’ll be putting your best foot forward. It’s easy to get caught up in to-do lists and internal goals, but success requires thinking about your customers’ needs in everything you do.

Utilize and build your network

People in your network may well be your first customers. Your network can also open the door to other valuable connections. Nurture your network with authenticity and enthusiasm, always giving as much or more than you receive.

Focus on cultivating the most useful roles in your business and filling them with the right people. For example, effective leadership and good salespeople are key. Considering that 14% of those whose businesses failed have cited having the wrong team as a major factor, it’s important to think carefully about who you’re turning to as you build your venture.

Once you’ve got the right team in the door, put quality, well-considered training in place so they know what’s expected of them and how to accomplish it.

LendingTree researchers analyzed the latest U.S. Bureau of Labor Statistics (BLS) data to find the failure rates for businesses across the nation.

State and industry rankings are from highest to lowest based on one-year failure rates.

Nearly 1 in 5 U.S. businesses fail within the first year, according to the latest data from the U.S. Bureau of Labor Statistics.