You are using an outdated browser. Please upgrade your browser to improve your experience.
Best Credit Cards of January 2023
How Does LendingTree Get Paid?

Americans have an absolute mountain of credit card debt — $925 billion, to be exact.

Since the third quarter of 2021, credit card balances have risen by $121 billion. That’s a 15% increase, the largest year-over-year jump in more than 20 years.

With the increase, Americans’ credit card debt stands just $2 billion below the record set in the fourth quarter of 2019, when balances stood at $927 billion. Thanks to rising interest rates, stubborn inflation and myriad other economic factors, it’s likely just a matter of time before credit card balances surpass the 2019 record.

Though balances aren’t quite at record levels yet, they’re still light years above the $480 billion seen more than 20 years ago in the first quarter of 1999. 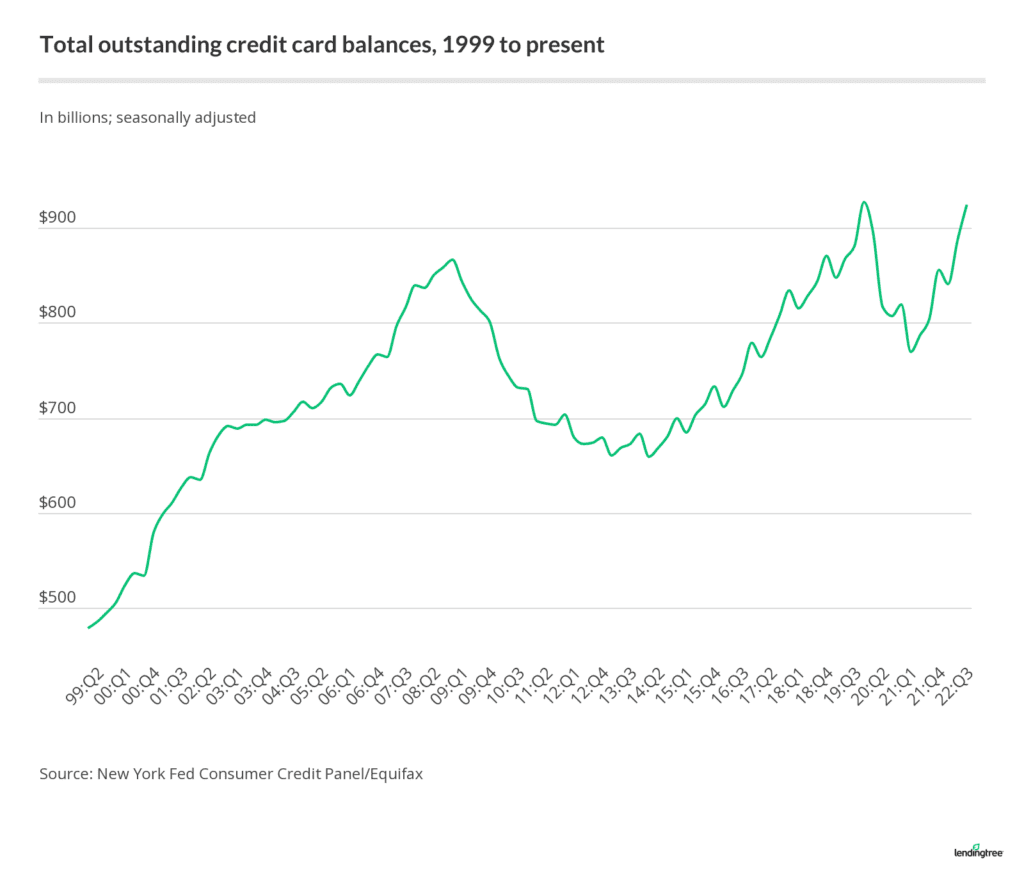 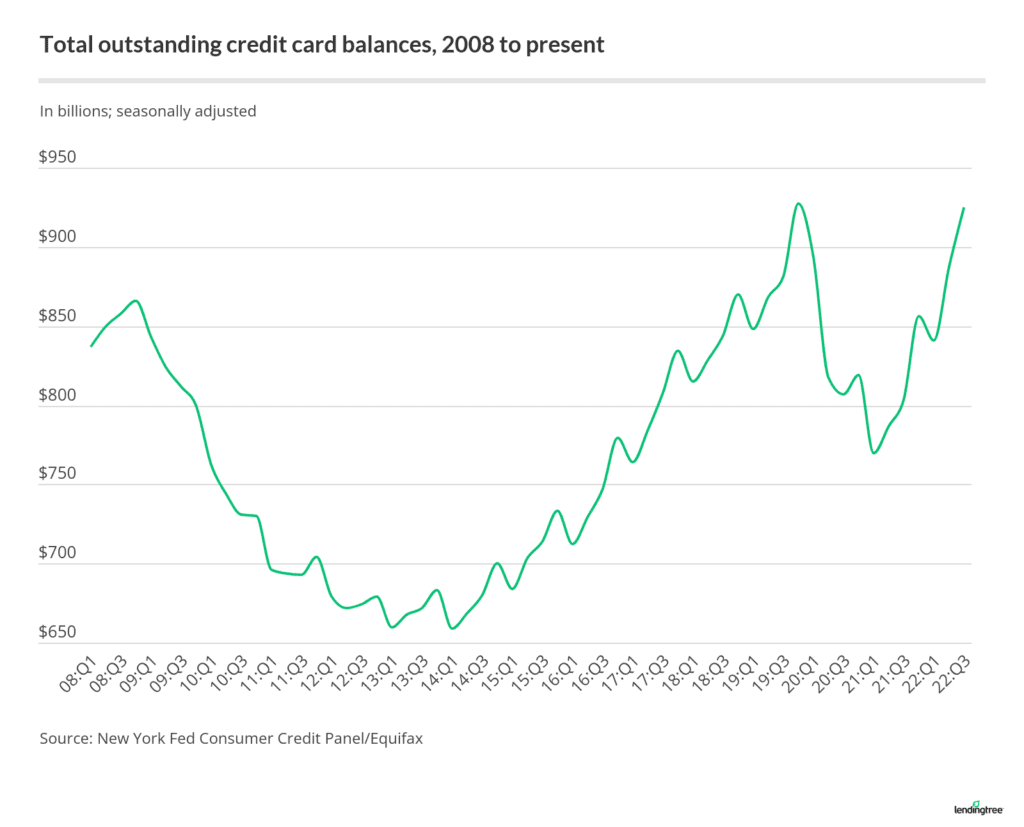 LendingTree analysts reviewed anonymized January and February 2021 credit report data from more than 1 million LendingTree users to calculate these averages and create a list of states with the most debt.

LendingTree has deep dives into average credit card debt in California, Texas, Florida and Washington, D.C. The reports include a statewide look at credit card balances, as well as breakdowns of card debt, utilization rates and other key data points in the 10 biggest metros in those states.

Americans carried a balance on 53% of all active credit card accounts in the second quarter of 2022, according to the most recent available data from the American Bankers Association. 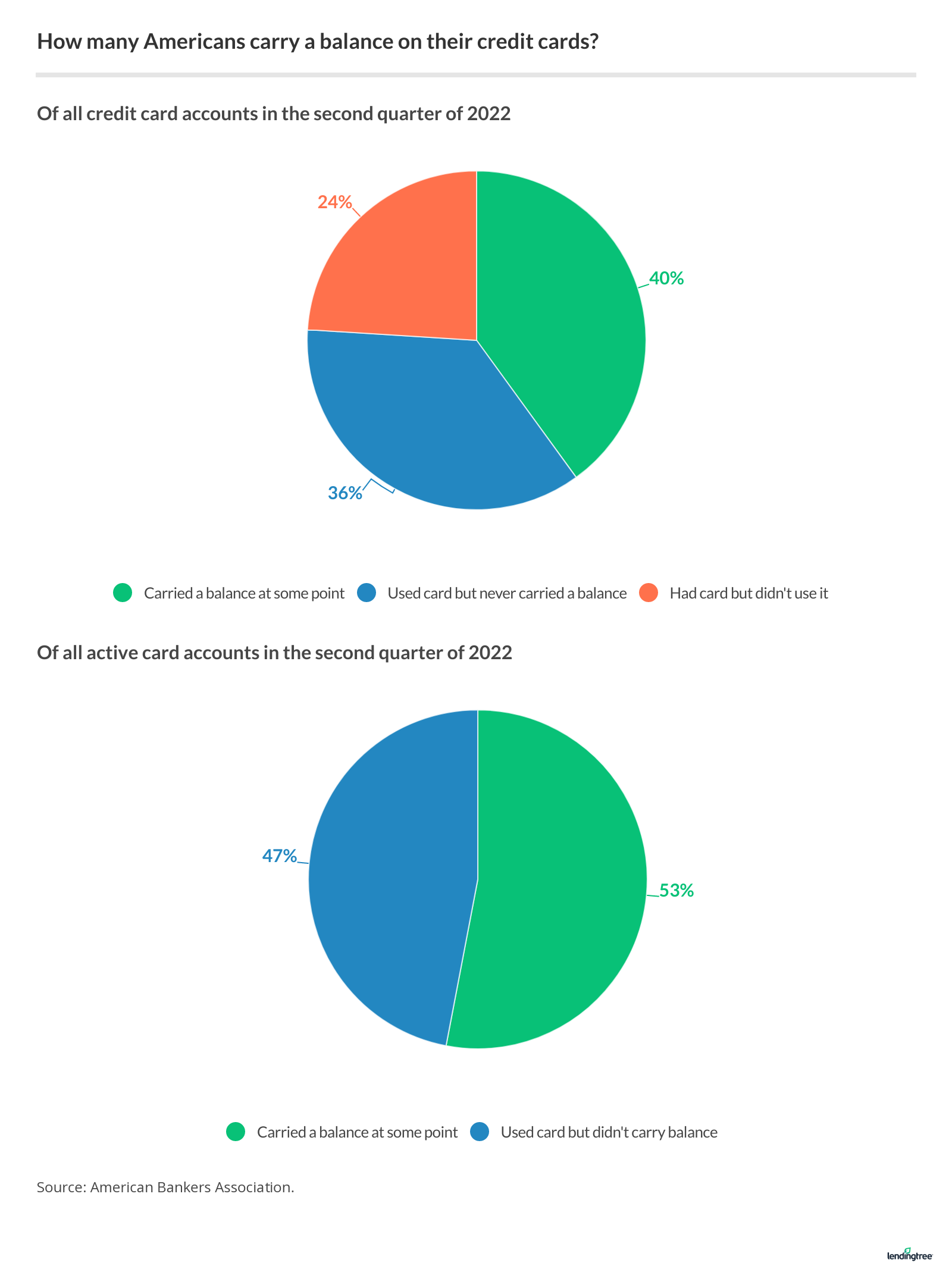 For new credit card offers, the average today is 23.39% — the highest rate we’ve seen since we began tracking rates monthly in 2019.

The Federal Reserve’s G.19 consumer credit report showed that the average APR for all current credit card accounts jumped to 19.07% in the fourth quarter of 2022, up from 16.27% in the third quarter. Meanwhile, APRs for cards accruing interest shot up to 20.40%, way up from 18.43% in the third quarter. According to the Fed, the average for all card accounts and for those accruing interest are both the highest they’ve been since tracking began in 1994.

If you’re planning to get a new credit card, your interest rate will likely be higher than those listed above. The latest LendingTree data on credit card APRs shows that the average APR with a new credit card offer is 23.39%, with the average card offering an APR range of 19.88% to 26.89%, with your rate varying based on your creditworthiness. Those rates have risen significantly in recent months, thanks to the Federal Reserve’s announcement of interest rate hikes in March, May, June, July, September, November and December 2022. The Fed will likely do the same at its next meeting (Jan. 31 and Feb. 1) and at least a time or two more in 2023. When this happens, cardholders should expect to see their cards’ APRs rise in the next billing cycle or two as a result.

Average interest rates on new credit card offers in the U.S. in January 2023 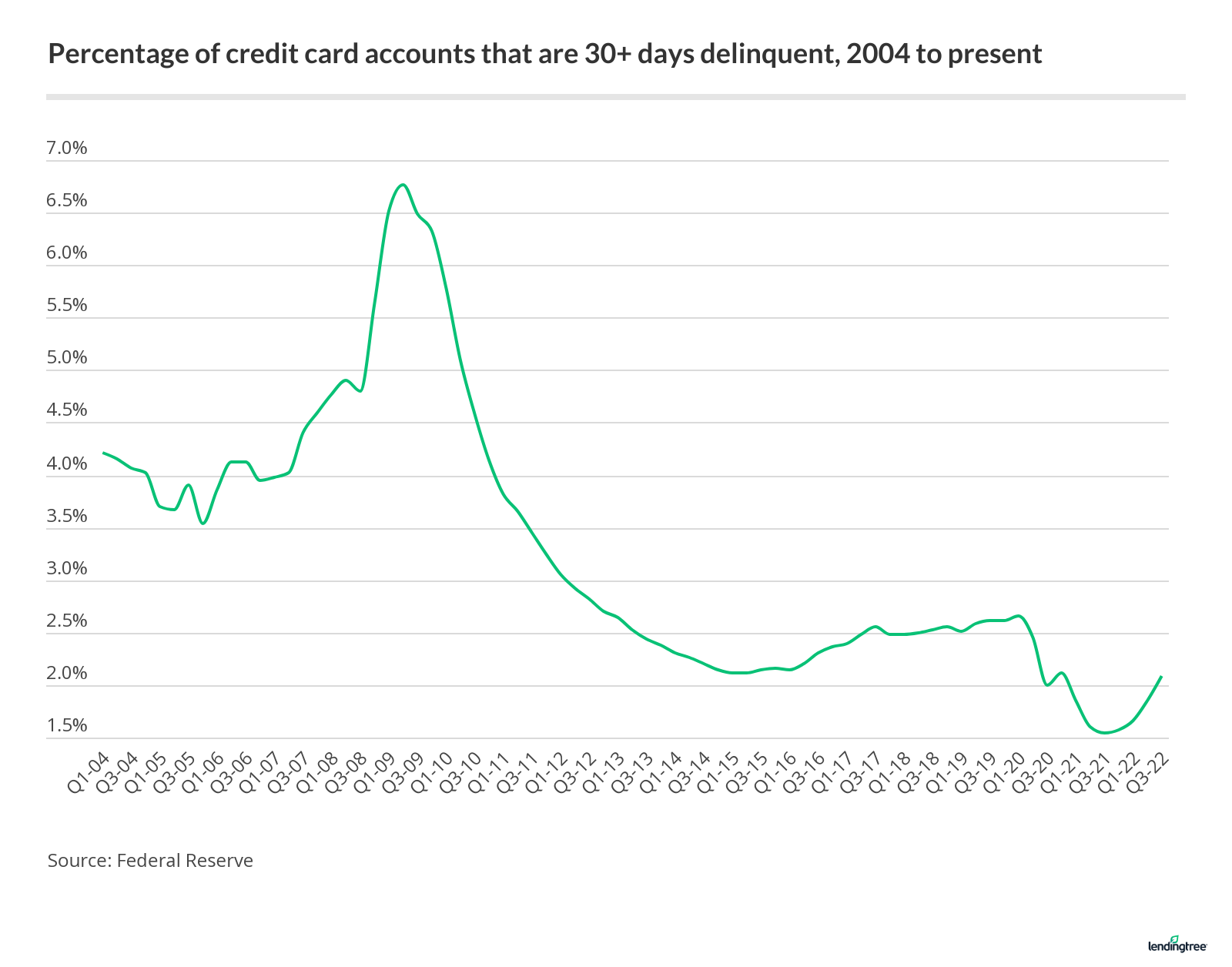 According to the most recent delinquency data from the Fed, the 30-day delinquency rate (or the number of consumers who are currently at least 30 days late with their credit card payment) rose from 1.85% to 2.08% in the third quarter of 2022.

That’s the fourth straight quarter of increases, pushing rates above 2% for the first time since the fourth quarter of 2020. However, delinquency rates are still near historic lows. Before falling below 2% in the first quarter of 2021, rates had never dropped below that number since tracking began in 1991.

It’s a huge difference from what we saw during the Great Recession, when delinquencies peaked at nearly 7% in 2009.

How to Pay Off Credit Card Debt in 9 Ways

The Chase Freedom Unlimited is the best credit card overall because it earns a high rate of cash back across all its spending categories for no annual fee.