About 70 million people – more than one-third of credit cardholders – said they involuntarily had a credit limit reduced or a credit card account closed altogether in a 60-day period stretching from mid-May to mid-July, according to a new survey from LendingTree.

The report is a clear sign that credit card issuers are still closing cards and reducing credit limits on cardholders in huge numbers, months after an April 2020 LendingTree survey showed that nearly 50 million cardholders had a card closed or credit limit reduced in the first month in which the coronavirus pandemic took hold of the country. 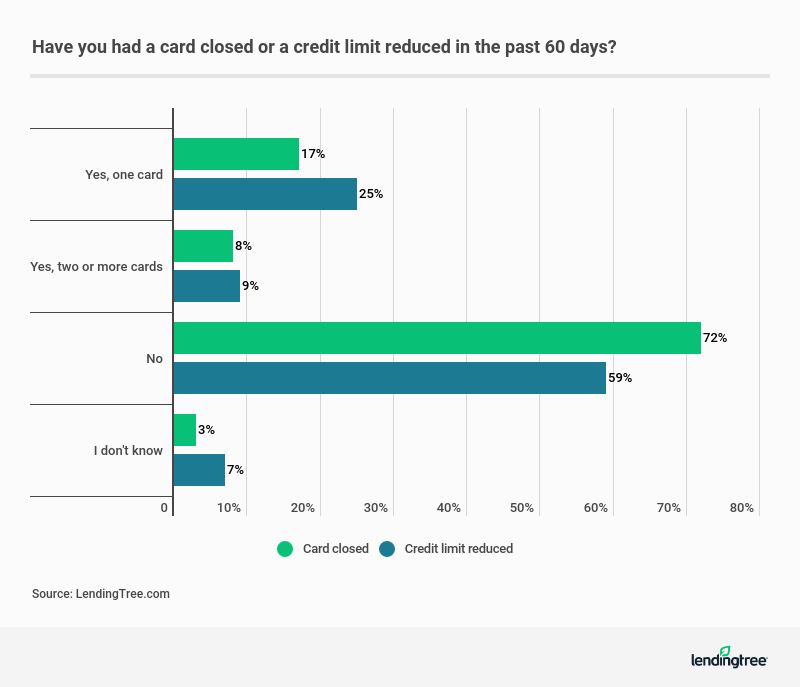 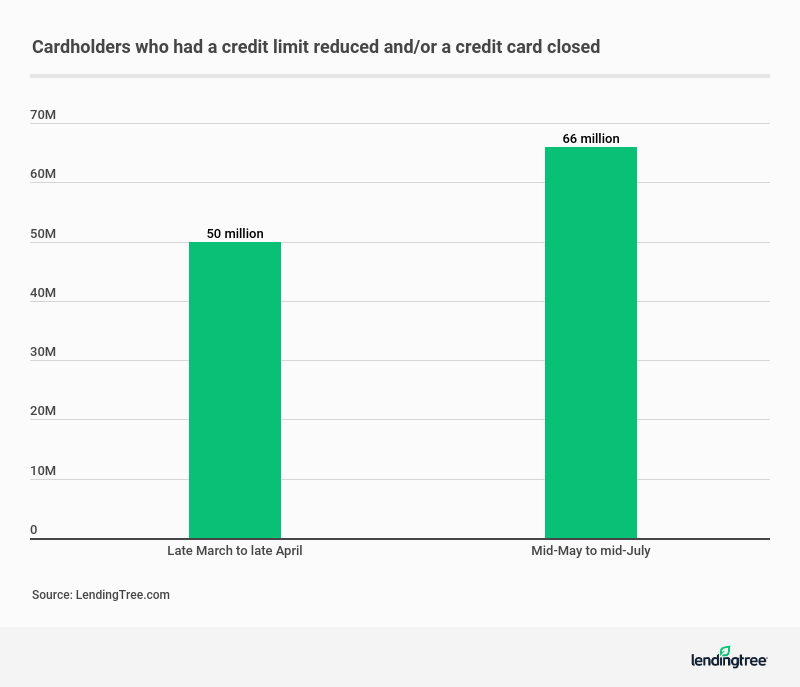 When LendingTree first asked cardholders back in April whether they’d had a credit card closed or credit limit slashed involuntarily during the COVID-19 crisis, we were so surprised with the results that we re-ran the survey to ensure the legitimacy of the numbers. However, after the second run, those numbers rang true. Nearly 50 million cardholders had one of these actions taken against them by a card issuer.

In this most recent survey, the numbers were even bigger. The good news is that even though a higher percentage of cardholders said they were affected in this survey than our April report, it appears that the pace of these actions slowed slightly.

Those are still staggeringly high numbers. They somewhat resemble the trend in recent weekly new jobless claim numbers, which have been decreasing as well, but remain at historically high levels.

This latest survey shows that while virtually all groups of people are having these actions taken against them, some are getting hit harder than others.

For example, millennials are the age group most likely to have a credit limit slashed or a card closed, and people with the highest incomes are the most likely to say one of these actions had happened to them. 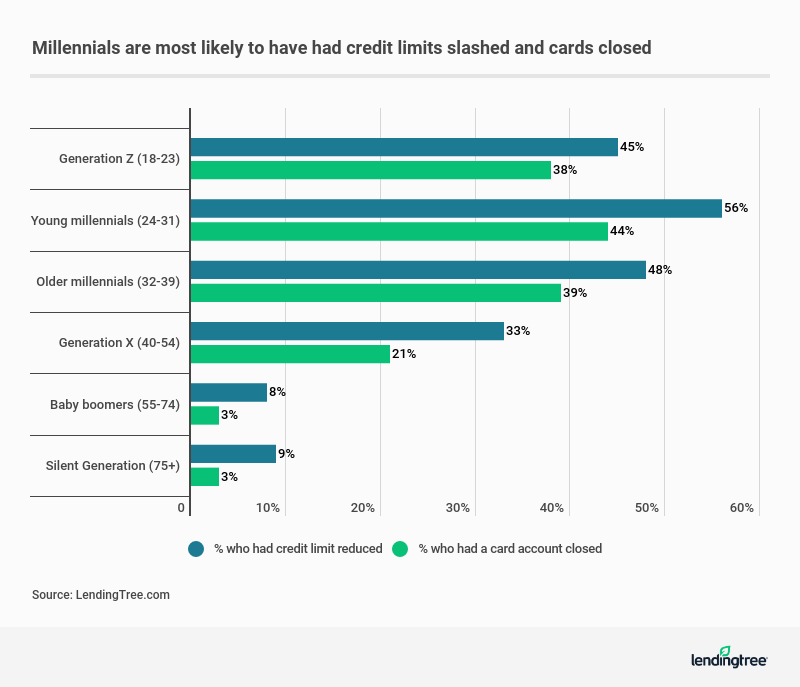 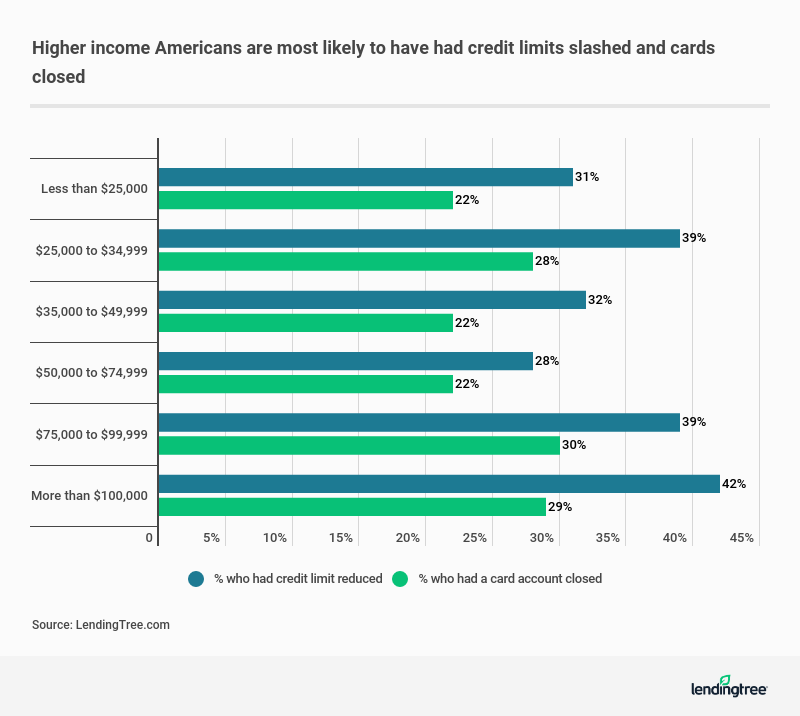 Why these two groups? Millennials don’t have as long a credit history as Gen X or baby boomers and thus might be seen as riskier.

Meanwhile, people with higher incomes may be more likely to have higher credit limits. In this time of great economic uncertainty, unused available credit poses a risk to issuers, so they take steps to trim it back. 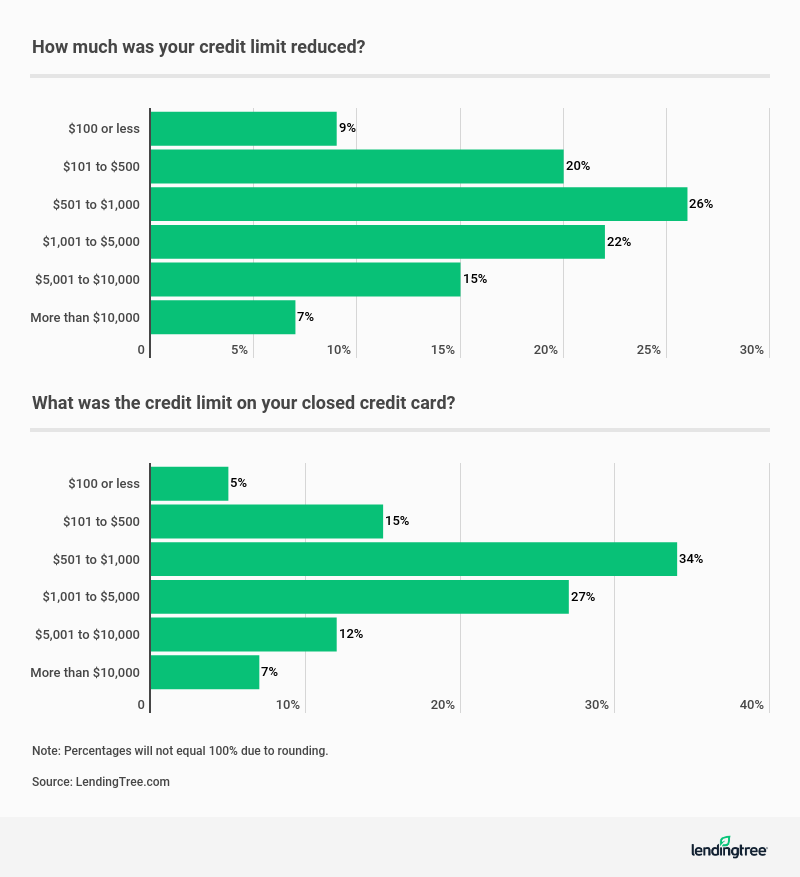 Whether a card was closed altogether or simply had its credit limit reduced, the most common amount of credit lost was between $501 and $1,000 – and more than half of all reductions and closures involved $1,000 or less.

However, given that high-income Americans were the most likely income bracket to be affected, it shouldn’t come as a surprise that some were hit far harder.

More than 1 in 5 (22%) cardholders who had their limits reduced said the reductions were $5,000 or more. A similar percentage of closed card accounts had credit limits that were that high.

Because higher income Americans are more likely to have higher credit limits, these reductions might have been less impactful than they would’ve been for folks at lower income levels. Still, losing those thousands of extra dollars in available credit was still likely meaningful for many. 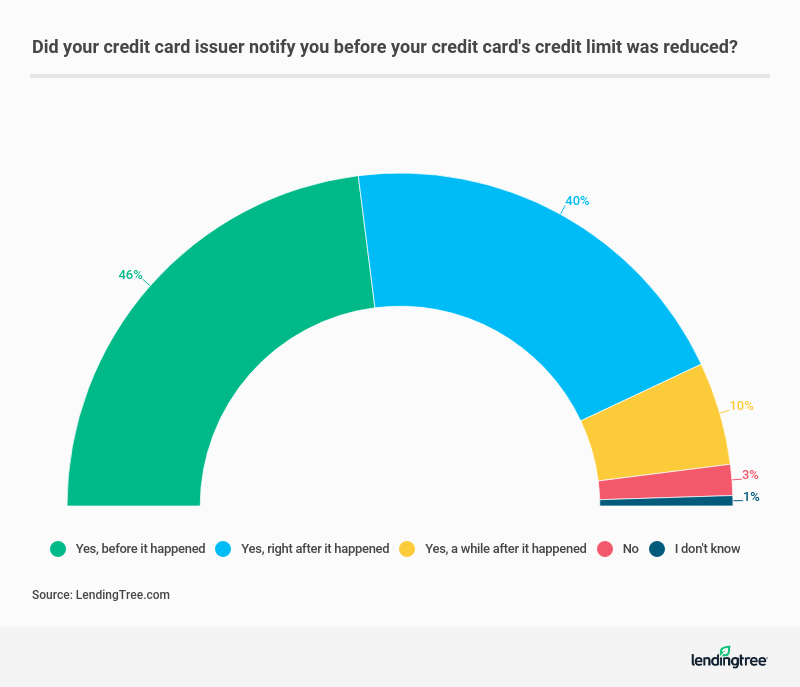 If your issuer decides to increase your credit card’s annual fee or raise your interest rate, it is required by law, in most cases, to give you 45 days’ advance notice before the move takes effect. (A rate move because of a Federal Reserve rate hike or cut is one major exception.)

That’s true with most other key terms and conditions of your credit card, too.

Issuers have a lot of freedom to make those changes, and often aren’t required to inform you of these changes. If your credit limit is reduced due to a mistake on your part (such as being 60 days late with a payment), they must tell you they’re doing it and why.

If your card issuer decides to reduce the credit limit on an inactive or dormant card or even close the account altogether, they typically don’t have to let you know.

However, the survey found that 89% of those whose card limits were reduced said they had been notified.

Even if notified of the change, many cardholders weren’t given a reason why it happened. For example, 15% of credit limit reduction notifications didn’t include a reason.

We’re several months into the pandemic and one of the few things we know for certain is that no one knows exactly when this is going to end. Because of that, it’s likely that we will see banks continue to be cautious when lending. There are simply too many unknowns and too many risks for card issuers to handle things any other way.

That means that more cardholders should expect to have their credit card’s limit slashed or to have dormant accounts closed involuntarily. It may not happen quite as often in the next 90 days as it has happened in the past 90 days, but it almost certainly will continue to some degree.

There’s nothing you can do that will guarantee that your limit won’t be reduced or your account closed. Ultimately, it is the card issuer’s decision.

To improve your odds of a surprise credit limit cut or card account closure, consider using any dormant cards more. Don’t spend yourself into trouble, of course. But if you can pay for your next grocery trip with a card you rarely use, that can keep that card active. Better yet, put a small, recurring subscription – such as Spotify or Netflix – on that little-used card to ensure that it is used each month. Then, set up automatic payments so you never pay late.

Also, if you do have your limits slashed or your account closed, you don’t have to take it lying down. You can ask your issuer to reconsider.

If that’s not successful, you can reach out to another card’s issuer to see if it would be willing to increase your credit limit on that card to help offset what you lost on the other card. You’re less likely to have your request granted today than you were prior to the pandemic – that’s the case if you were considering applying for a new card, too – but it still might be worth asking.

LendingTree commissioned Qualtrics to conduct an online survey of 1,003 credit cardholders, with the sample base proportioned to represent the overall population. The survey was fielded July 10-13, 2020.