This year’s upcoming holiday shopping season is filling nearly half of consumers with dread, according to a LendingTree survey of more than 2,000 Americans.

The main reasons why involve the anticipated costs of presents and festivities, as well as the pressure to purchase gifts. In fact, stress levels are so high that about a quarter of Americans say they’re even losing sleep worrying about how they’ll afford holiday spending this year.

See what else the survey revealed about 2021 holiday shopping sentiments, along with tips from our expert on how to avoid holiday debt this year.

Nearly half are dreading the holidays

With this upcoming holiday season, 48% of Americans are feeling grinchy when it comes to holiday spending. 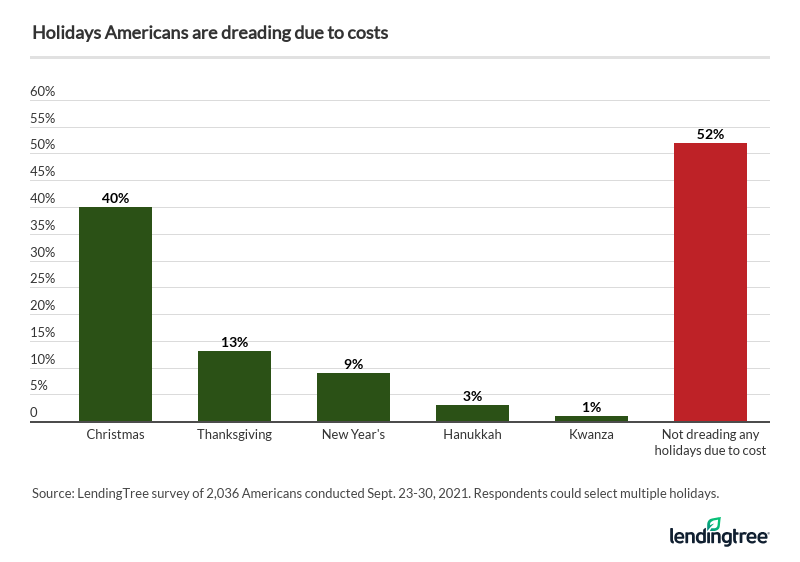 And it’s not just your run-of-the-mill dread — nearly 1 in 4 consumers are losing sleep worrying about how to pay for the winter holiday season. This insomnia is worse among parents with kids under 18 (36%) and Gen Z (35%), and more pronounced in women versus men (27% versus 20%).

“It’s definitely normal to dread the holidays because of how costly they are. However, there’s no question that for some Americans, this holiday season will be even harder,” says Matt Schulz, chief credit analyst at LendingTree.

Not only have millions had their financial lives flipped upside down by the pandemic, he explains, but this year has introduced a growth in inflation. “It’s a really bad time to have everything cost more,” he notes.

Not only that, but 13% of survey respondents say they’re still paying off bills from last year’s holiday spending.

Tip: If you’re still struggling to pay down last year’s holiday debt, see if you can find a way to lower your interest rate, advises Schulz. “Zero-percent balance transfer cards are widely available for folks with good credit scores and come with offers of a year or longer without any interest on the transferred balance. That can be a godsend.”

Or, just call your card issuer and ask for a lower rate: “It sounds far-fetched, but more than 80% of folks who asked for a lower interest rate last year got one, according to a LendingTree survey,” says Schulz.

Even for those who don’t have lingering bills from 2020, more people expect to rely on their plastic this year — debit cards and credit cards were the most popular methods of payment among survey respondents (47% and 39%, respectively).

More than 4 in 10 think they may incur holiday debt

The survey shows that 41% of Americans think it’s at least somewhat likely they’ll go into debt shopping for the holidays — this is up 10 percentage points from last year’s survey. 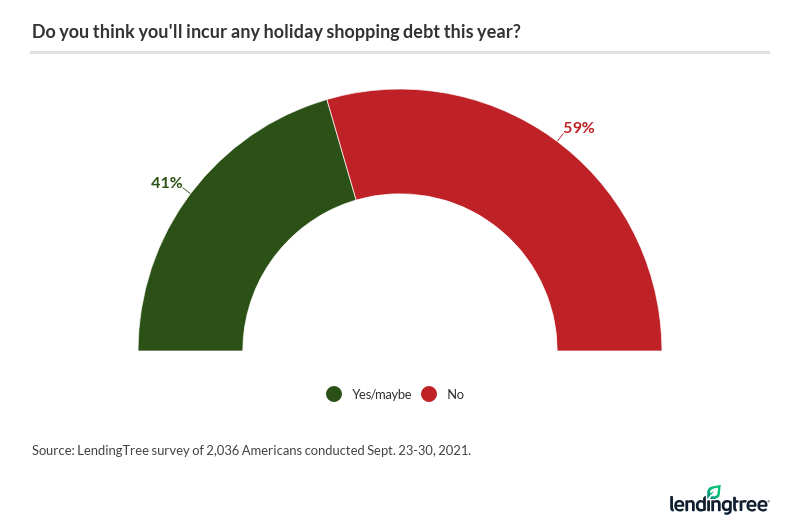 “I’m not surprised,” says Schulz. “Millions of Americans have a razor-thin financial margin for error; inflation makes it even thinner.”

So just how much do Americans plan to spend on holiday gifts? This year’s average is $792, with some groups sharing higher spending expectations. For example, millennials anticipate spending $829 and boomers — possibly to spoil their grandkids — say they’ll spend $803. There’s also a big disparity between men who are prepared to shell out $895, compared to women who say they will spend $701. 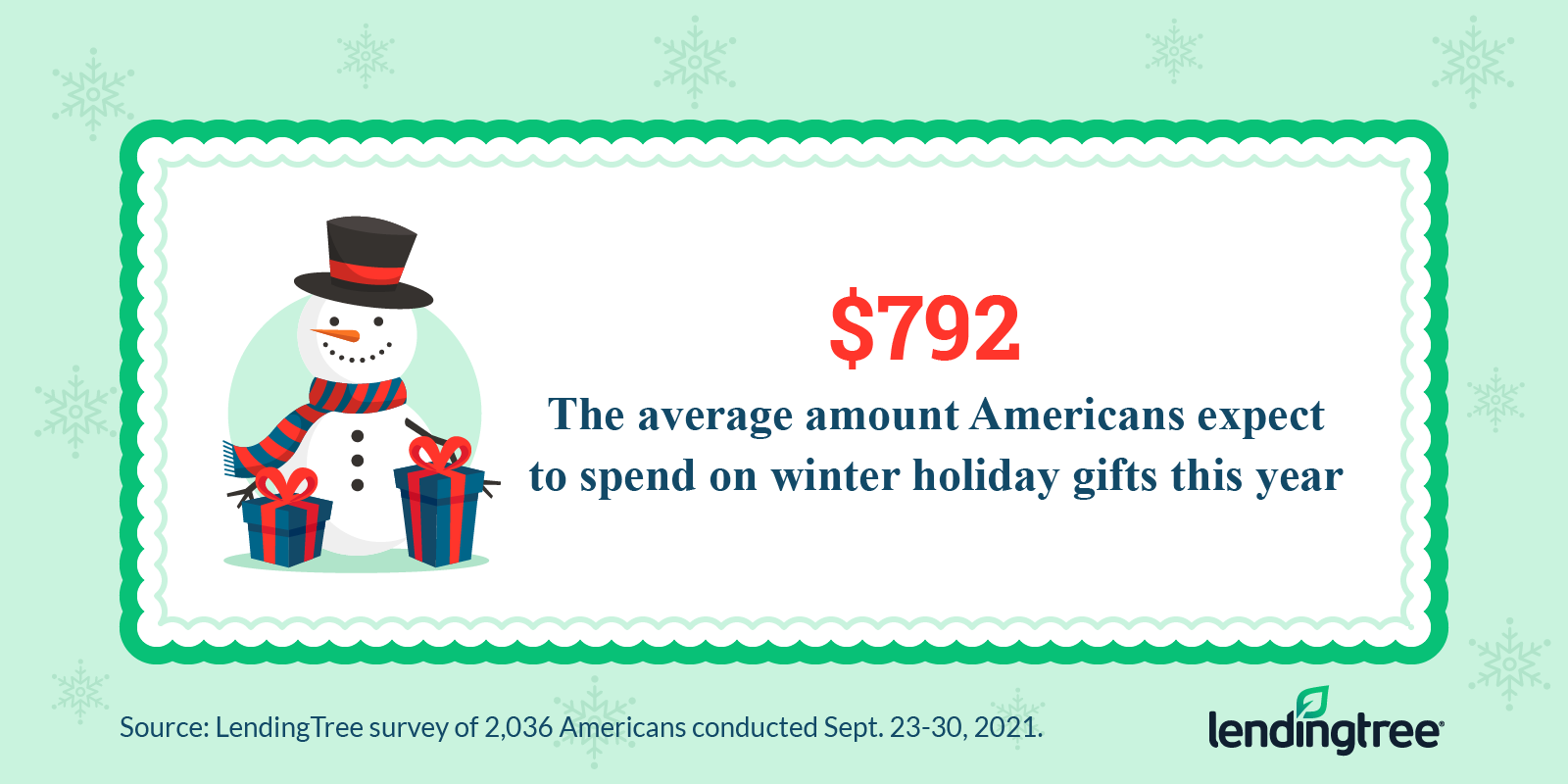 As for shoppers’ preferred payment method, debit cards took the lead with 47%. (while just 39% will use a credit card). According to Schulz, this could mean potentially missing out on credit card rewards and other perks, though everyone would need to assess their personal situation.

“A credit card is usually the best choice for shopping, as rewards can help extend your budget. Purchase protection and other perks that come with the card can also prevent headaches if things go wrong,” he says. However, anyone who doesn’t feel comfortable using a credit card shouldn’t use one, he added: “Credit cards are like knives. They’re incredibly useful tools, but if you don’t use them properly, you can really hurt yourself.”

Despite money worries, 40% of consumers say they feel pressured to buy gifts for someone. These include:

In addition, some respondents listed their coworkers, bosses and childrens’ teachers as other obligatory gift recipients on their list.

Gen Zers and millennials were the age groups most likely to feel gift-giving pressure (56% and 50%, respectively).

As for which gift recipients make the cut, here’s who exactly is on Americans’ shopping lists: 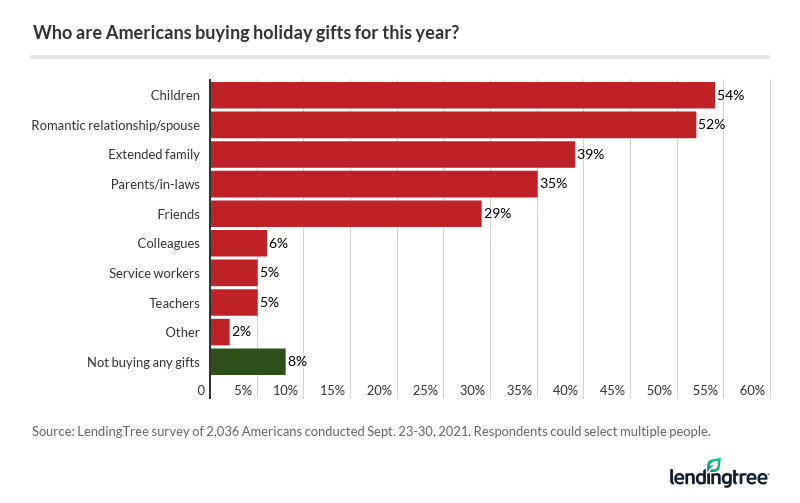 Parents with young kids feel the most holiday pressure

It’s not necessarily the “most wonderful time of the year” for parents with kids younger than 18 in the household.

For starters, they are the group with the highest percentage still paying off debt from 2020 (21% versus 13% of total respondents), and more than half (51%) expect to tack on more debt this year. More than a third of parents say they are losing sleep over affording the holidays (36%), while 59% expressed a sense of dread, much higher than any other cohort in the survey.

“The pressure on parents during the holidays is real,” says Schulz, who is a parent himself. Besides getting bombarded with ads and social media posts about the hottest, must-have gifts and other parents bragging about what they got their kids, there’s also the internal pressure.

“No parent wants to disappoint their kid, and many of us have thought of going overboard for the holiday to make up for the crummy past two years,” he says. That all adds up to feeling compelled to spend more — even for those without the financial means. 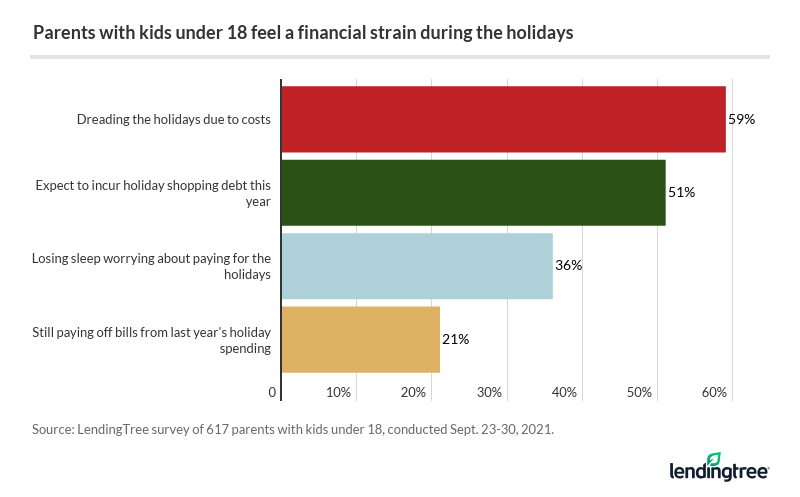 Most haven’t started shopping yet

Perhaps part of the pressure that people are feeling is that nearly 70% of Americans haven’t started their holiday shopping yet. This is a massive drop from last year, when only 48% hadn’t started shopping around this time. (Note: Last year’s survey was conducted one week later than this year’s).

The other big shift is that consumers expect to do more in-store shopping this year. During the height of the pandemic in 2020, 54% of Americans planned to buy most of their gifts online. This year, that dropped to 42%.

Want to enter the holiday season with less dread and more joy? These shopping strategies can help relieve some of the financial pressure.

LendingTree commissioned Qualtrics to conduct an online survey of 2,036 U.S. consumers from Sept. 23 to Sept. 30, 2021. The survey was administered using a nonprobability-based sample, and quotas were used to ensure the sample base represented the overall population. All responses were reviewed by researchers for quality control.