Two in 3 shoppers who’ve used buy now, pay later financing said it’s caused them to spend more than they would have otherwise, a new LendingTree survey of 1,040 Americans found. The survey also revealed that these financing companies have a dedicated base of young consumers, many of whom don’t know how much they’re being charged in interest. Learn more in the breakdown below.

The vast majority (83%) of those who have utilized buy now, pay later financing did so within the past year. That figure includes about 1 in 6 who had used it within a week of taking the survey. 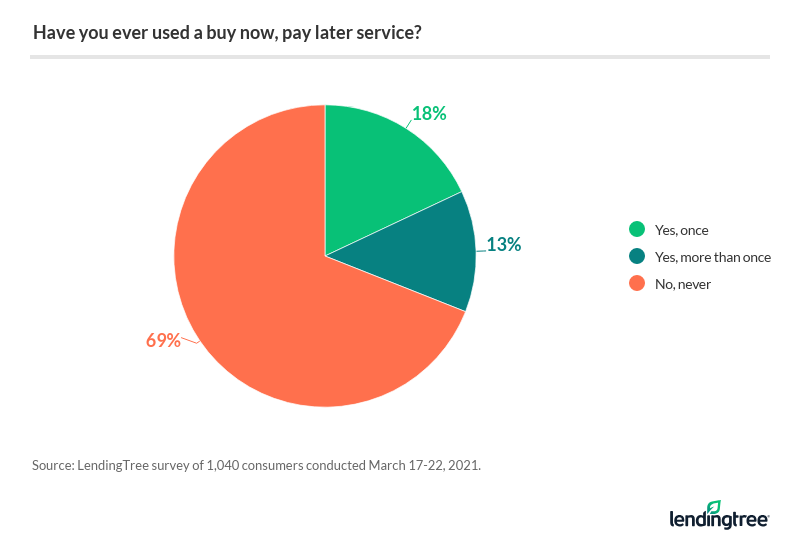 The main reason some (39%) consumers haven’t used buy now, pay later financing is they don’t know what it is. Other respondents said they’d rather just pay for the product upfront without having to worry about making payments (33%), and 19% noted that it seems like a gateway to overspending.

“The fact that so many folks have used these loans five or more times is amazing,” LendingTree Chief Credit Analyst Matt Schulz said. “It is an incredibly good sign for the future of these products. They certainly seem to be here to stay.”

Many shoppers use buy now, pay later to purchase things they can’t afford

The No. 1 reason shoppers used a buy now, pay later service was to spread out the cost of more expensive purchases over time, but more than a third of consumers utilize buy now, pay later financing to purchase things they normally wouldn’t be able to afford. 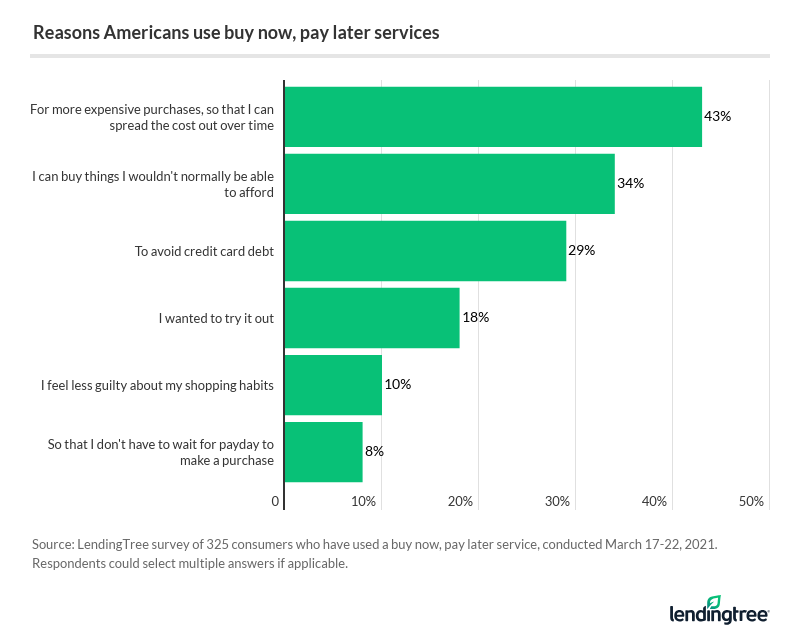 Having the option to break up their purchase into smaller payments also leads consumers to overspend. Two-thirds of consumers said they typically spend more using buy now, pay later than they would if they had to front the money at the time of purchase.

Those impacted by pandemic layoffs or furloughs were four times as likely to use buy now, pay later financing. Six in 10 Americans laid off or furloughed have used buy now, pay later financing, compared with 15% who didn’t experience pandemic-induced income loss. If your income has been affected by the coronavirus pandemic, check out these tips on how to manage your money. 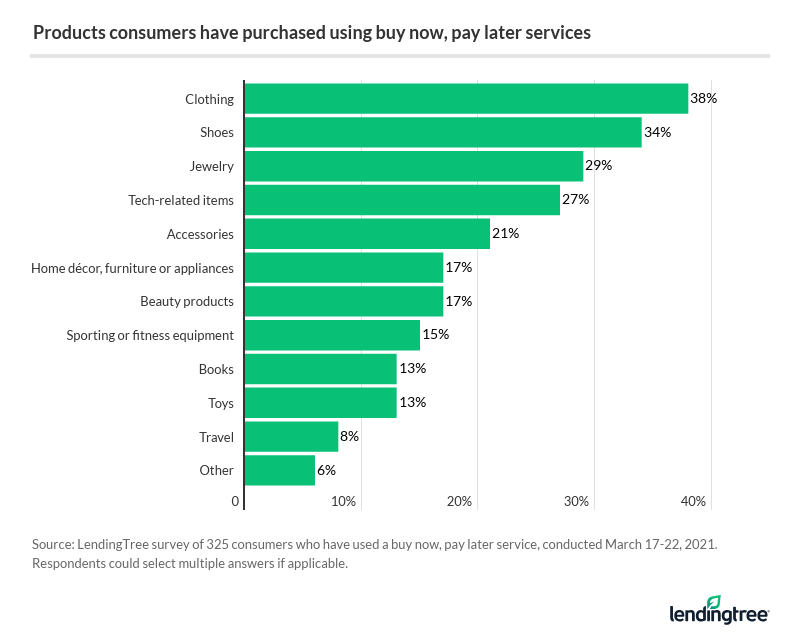 Nearly 70% of those who have used a buy now, pay later service did so to purchase a designer item, such as a Gucci belt or Louis Vuitton handbag. Of that group, about half have even done so multiple times. 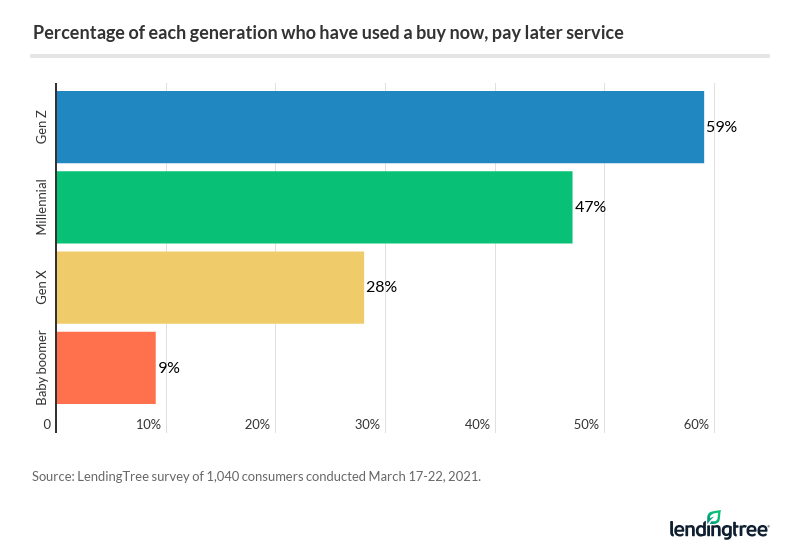 The fact that so many younger shoppers flock to buy now, pay later doesn’t come as much of a surprise to Schulz. Gen Z and millennial shoppers are more leery of using credit cards, so they may find the prospect of a finite repayment schedule offered by a loan more alluring.

“We’ve seen that people tend to overspend with these loans, and Gen Z and millennials are likely to have far smaller financial margins for error than Gen X and boomers, so they’re taking a bit more of a risk,” Schulz said.

Younger shoppers are also less likely to view buy now, pay later agreements as a form of debt. Just 38% of Gen Z shoppers believe this, versus 53% of millennials, 62% of Gen X shoppers and 68% of baby boomers. 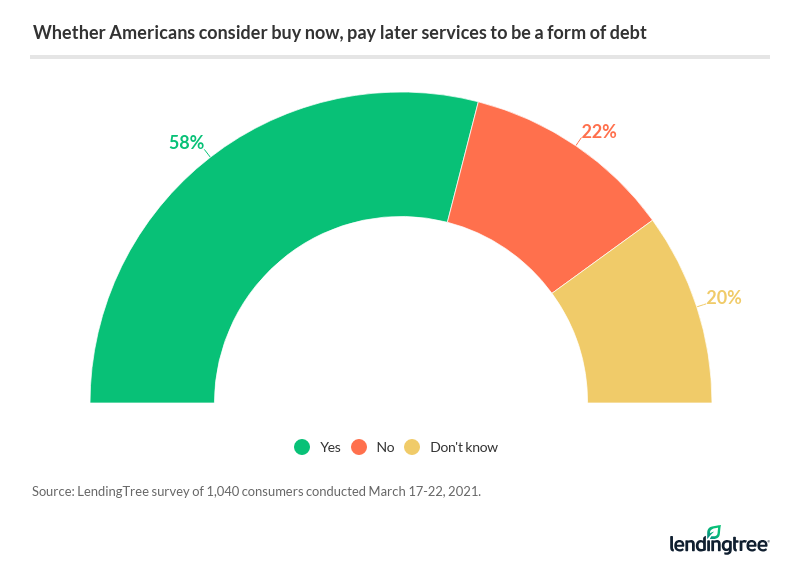 Many buy now, pay later loans must be repaid every two weeks rather than once a month, which makes it easier to miss payments, according to Schulz.

Thirty-one percent of shoppers who entered a buy now, pay later agreement didn’t know what the interest rate and fees would be before agreeing to finance their purchase. One in 10 still have no idea what interest rate they’re paying. 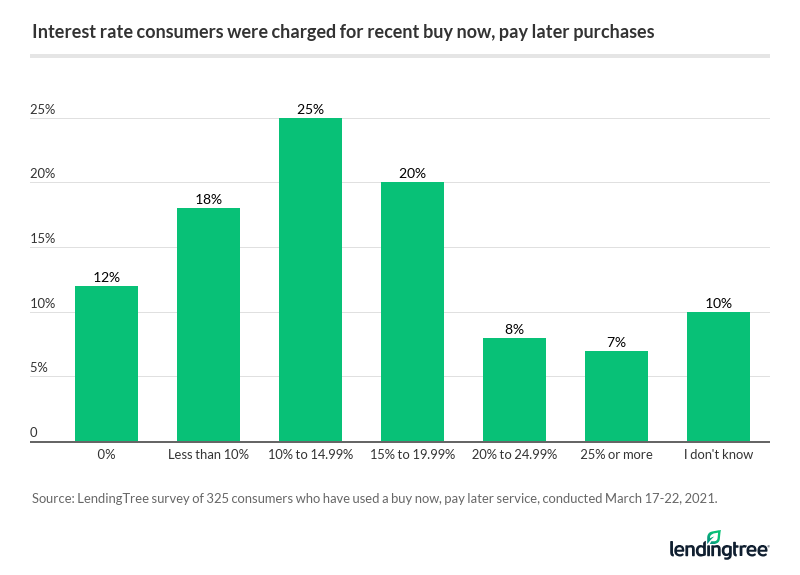 While many buy now, pay later agreements only let you split your purchase into a few monthly installments, many shoppers are still paying off these loans. One in 7 (14%) buy now, pay later shoppers have owed money to one of those services for over a year. Just 29% said they’ve completed all their payments.

LendingTree commissioned Qualtrics to conduct an online survey of 1,040 U.S. consumers from March 17-22, 2021. The survey was administered using a non-probability-based sample, and quotas were used to ensure the sample base represented the overall population. All responses were reviewed by researchers for quality control.