35% of Americans Likely to Apply for a Store Card This Holiday Season, a Big Jump from 2021

Store credit cards are back! A year after interest in store cards plunged, more Americans say they’re considering applying for one this holiday season, according to a new survey from LendingTree.

That’s despite the fact that store card APRs have spiked in the past year, thanks to the Federal Reserve, and more than 1 in 3 people who’ve had one of these cards in the past ended up regretting it.

A year ago, consumer interest in store credit cards tanked. Just 29% of consumers said they were at least somewhat likely to apply for one of these cards, down a stunning 15 percentage points from 2020. It was the second-lowest percentage since we started tracking in 2018 (just 24% said so that year).

There wasn’t much reason to expect a bounce back either — especially considering the ongoing meteoric growth of buy now, pay later loans, which often compete directly with store credit cards for consumers’ spending dollars. Add in the fact that the Fed’s continuous rate increases were making the already-sky-high interest rates on these cards even higher, and the future didn’t look bright for store credit cards.

Fast forward from a year ago, and it looks as if reports of the store credit card’s demise might have been greatly exaggerated — at least for now.

More than 1 in 3 Americans (35%) say they’re at least somewhat likely to apply for a store credit card this holiday season. That’s the second-highest percentage since LendingTree began tracking in 2018, up 6 percentage points from last year. 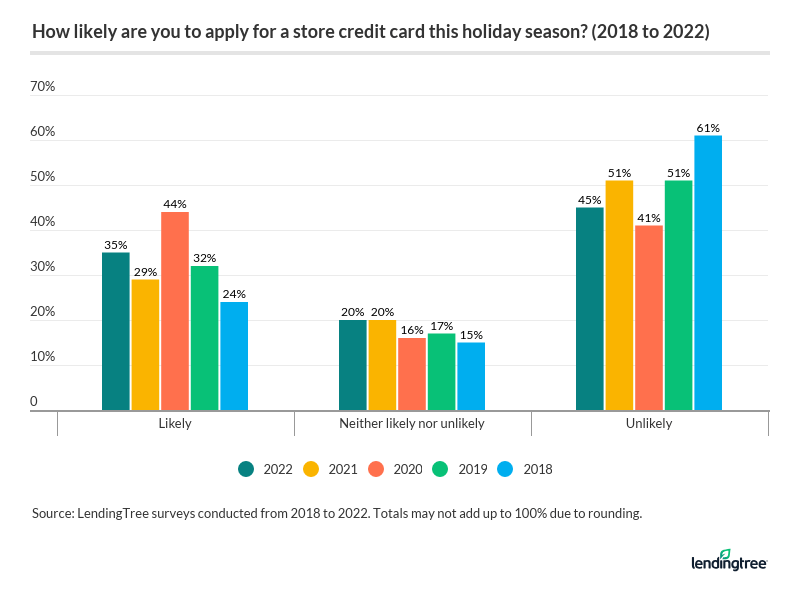 Meanwhile, 45% are unlikely to apply, including 15% who are somewhat unlikely and 30% who are highly unlikely. Last year, those percentages were 51%, 14% and 37%, respectively.

Many have regretted getting a store card in the past

Consumers tend to have a love-hate relationship with store cards. We love the sign-up discounts and rewards that are often specially tailored to the wants and needs of that retailer’s customer base. However, we absolutely hate how expensive these cards can be — that hate is understandable, especially given how high their interest rates can be.

Nearly 4 in 10 (37%) people who have a store card or have had one previously say they regretted getting at least one of them. That includes 14% who say they’ve regretted several store cards. 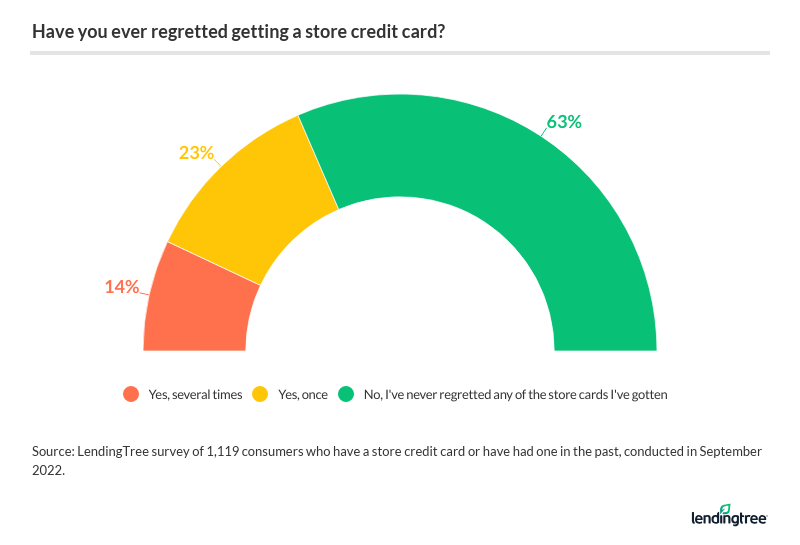 It shouldn’t be news to anyone who uses a credit card that card interest rates have soared in 2022. The Federal Reserve has already raised rates six times this year and is almost certain to do so once more before 2023 arrives.

Those moves have sent store credit card APRs — which are traditionally high, even in the best of economic times — further into the stratosphere.

Unlike other credit cards, most store cards come with just one possible APR, meaning everyone gets the same rate whether their credit score is 540 or 840. Seventy-three of the 102 cards we reviewed were single-rate cards. The average APR on those cards was 28.09%. For the 29 cards that featured a range of possible rates, the average was 22.85%, with a range of 18.36% to 27.34%.

The biggest knock on store credit cards has been that their interest rates are sky-high, even by credit card standards. Traditionally, the typical APR on a new store card offer could be 5 percentage points or more higher than that of a typical general-purpose card.

While that’s still generally true, the average credit store credit card APR has grown a little less quickly than that of most credit cards in the past year:

That difference (more than four-tenths of a percentage point) is noteworthy. For someone who owes $1,000 on a store card and pays $100 a month, it likely only equates to a few extra dollars in interest over the life of that balance — but the truth is that every dollar counts.

Inflation has whittled down consumers’ financial margin of error to near zero, so even a few extra bucks saved each month can mean some welcome breathing room when bills come due.

Why are store credit card rates increasing more slowly? There are several things at play, including:

That last point is one to watch going forward. While there’s no limit to the rates banks can charge on credit cards, it’s long been thought that the industry has viewed 29.99% as a sort of unofficial ceiling, a rate above which few banks dare to push. Some do, but only very few, and not the megabanks that thoroughly dominate the credit card space. In fact, most cards never even get near that number, though that is changing.

Just one card we reviewed came with an APR of 30% or higher, which is up from zero last year. However, we found 29 cards offering a possible APR of 29.99%, up from just eight a year ago. Of those 29, 21 are variable-rate cards, meaning the most recent Fed rate hike — which just happened on Nov. 2, though most issuers had yet to incorporate into their new credit card offers at the time this was written — should send those APRs well over 30%. Still, given the industry’s seeming reluctance to push past that 30% barrier, it’s likely that at least a few of those cards’ APRs will stay unchanged, no matter what the Fed does.

That’s not something banks or credit unions would want to do. Choosing not to pass higher lending costs along to the customer means the financial institution makes less profit on each loan. However, if banks believe that pushing rates above 30% will mean that significantly fewer people will apply for that card, the issuer may choose to leave rates just below that number and look to make up any lost revenue in other ways, such as by increasing fees.

With store cards, proceed with caution: Again, used wisely, a store credit card can be a really useful tool, despite its less-than-stellar reputation. However, that doesn’t mean that reputation wasn’t deserved. The truth is that if you carry a balance regularly, a store credit card probably isn’t for you — the interest rates are just too darn high. You’d likely be better off with a general-purpose credit card that would have lower rates, possibly offer more lucrative rewards and be usable anywhere credit cards are accepted. If you choose to get a store credit card, ensure you understand some key details about the card before applying, especially the interest rate. What you don’t know can cost you, so tread lightly.

LendingTree commissioned Qualtrics to conduct an online survey of 1,545 U.S. consumers from Sept. 20-23. The survey was administered using a nonprobability-based sample, and quotas were used to ensure the sample base represented the overall population. All responses were reviewed by researchers for quality control.

LendingTree also reviewed credit card offers from 73 of the nation’s biggest retailers, including brick-and-mortar and online-only stores. In all, 102 cards were reviewed, including ones that were both co-branded and not co-branded.

We reviewed basic terms and conditions, including APRs, online through issuers’ publicly available websites. Credit card offer data is accurate as of Nov. 3, 2022.

Consumers are still slightly more likely to use store cards to shop during the holidays than trendy buy now, pay later loans.

A new LendingTree survey reveals that more Americans are likely to open a store card during the holidays, but many ultimately regret it.

READ MORE
Despite Sky-High APRs, Nearly 1 in 3 Americans Plan on Getting a Store Card This Holiday Season

Consumer demand for these store cards is growing, even though about half of retail cardholders regretted getting one in the past.