The first step to fixing a problem is acknowledging that it exists. If monitoring your credit score is a healthy financial habit, can checking your score often lead to improvements? Not really, according to a new study using LendingTree app data.

Each month between March 2020 and January 2021, people with the lowest credit scores checked theirs more frequently, on average, than people with the highest scores. But doing so didn’t have a net impact on the scores of those with poorer credit, the data shows.

Regardless of the impact, you can’t check your credit score too often — even if doing so won’t magically improve it, says Matt Schulz, LendingTree chief credit analyst.

“It’s something that should be part of your regular financial routine,” he says. “At a minimum, it’s a good idea to check your score at least once a month, perhaps when you’re sitting down to pay your bills.”

People with lower credit scores are more persistent about checking them

The majority of Americans should have an idea about their financial situation on some level. Even consumers with serious credit card debt who might not want to know the truth about the financial hole they’re in should at least be aware that they aren’t in great financial shape.

That trend continues at each credit score level. Continuing the October example:

“For many of those folks, they’re checking their progress toward a higher score and celebrating every little step of the climb because they know good credit can save them real money going forward,” Schulz says.

The time of year impacts how often people check their scores

The holiday and post-holiday periods can be stressful for those needing to manage their money more strongly. When the world isn’t in a global pandemic, many people often end the year pushing their credit cards to the limit to pay for the travel, dining and gift-giving that come with the holiday season. 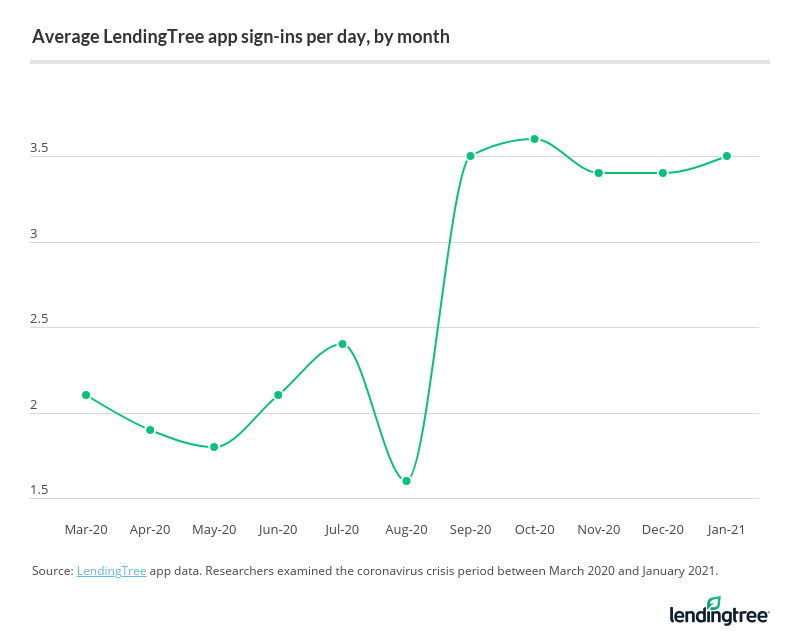 The elevated sign-in activity around the holidays might also be tied to people applying for new credit cards and trying to see what they qualify for, Schulz says.

“It makes sense because it is also a time where people tend to overspend,” he says. “People tend to take stock in their finances around the end of a year and the start of a new year, so reviewing their credit score might simply be part of their yearly financial checkup.”

The back-to-school period is also one where the LendingTree data reflects an uptick in activity for people checking in on their finances. The average number of daily sign-ins more than doubled between August and September 2020 for people with the lowest credit scores.

3 ways to boost your credit score

Keeping a close eye on your credit score is important to growing it. Here are some tips.

Researchers analyzed data on hundreds of thousands of anonymized users on the LendingTree app between March 2020 and January 2021.

The LendingTree app allows users to check their credit score for free. Researchers tracked how often users logged into the app and grouped them by credit score:

Researchers also tracked the data by month during this period.

People with the lowest credit scores check theirs more often than people with the highest scores, but they don’t see a boost from checking them obsessively.