Country vs. City: Which Has the Larger Balances and Better Credit Scores?

The divide between the city and the country has been a cultural touchpoint for centuries. But when it comes to Americans in rural or urban areas, the differences between these two ways of living extend into finances, too.

While rural Americans have lower household incomes than those living in urban areas, they also have lower living costs, according to the U.S. Census Bureau. Residents of U.S. metropolitan areas, on the other hand, have higher poverty rates and wider income inequality gaps.

Do these divergences in economic and financial circumstances also impact how people use credit and manage debt? Using anonymized credit report data of LendingTree users, we set out to answer this question. We compared credit profiles of users residing in or outside of a Metropolitan Statistical Area, as defined by the U.S. Census Bureau.

Our results reveal that residents of metropolitan and rural areas do have distinct styles of borrowing money and managing debt. Overall, urban consumers tended to have higher debt balances than rural consumers — but the rural borrowers had slightly lower credit scores. Here’s a complete look at how people deal with debt and credit in the city versus the country. 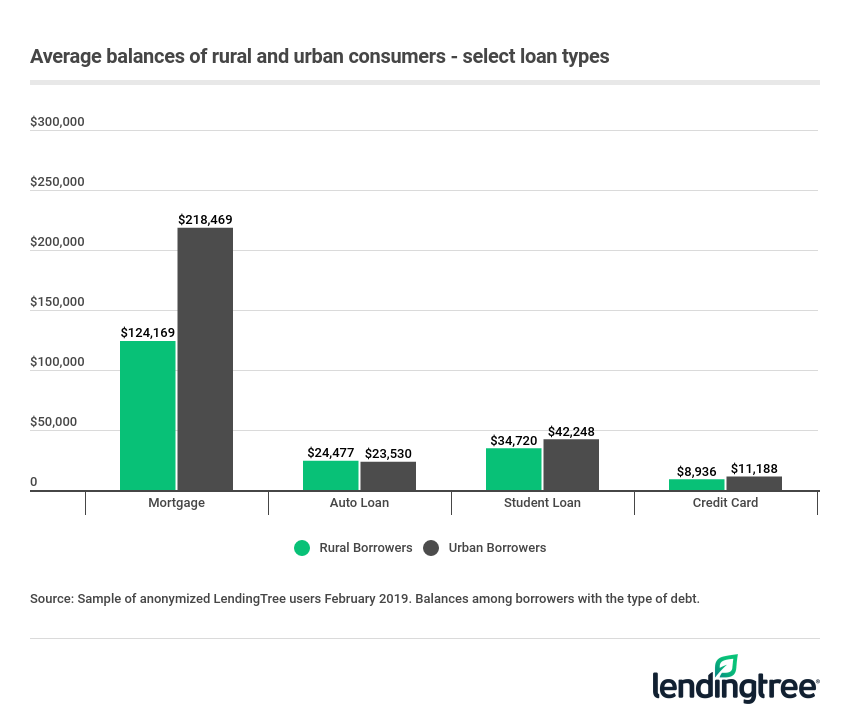 Across three of the four types of debt we compared, metro-area dwellers owed higher balances than residents in rural areas.

Mortgages: For home loans, the costs of living can help explain the gap — housing prices tend to be lowest in non-metropolitan areas, according to Brookings. This makes buying a home in a rural area both more affordable and accessible, as shown by rural Americans’ higher homeownership rates of 81% compared with 60% among urban residents.

Lower home prices also lead to lower mortgage balances, as rural homeowners can take out smaller home loans to match. Our study finds that among people with a mortgage, urban residents owed $94,300 more on average than those in rural areas.

Auto loans: Borrowing for vehicles was the one category in which rural residents owed more than those in metropolitan areas. Car values and prices tend to hold steady and won’t vary as much as housing prices, meaning that the lower costs of living won’t be reflected here. Looking just at people who held auto loans, those living in rural areas owed $947 more on their car loans than those living in urban areas.

This could be explained in part by the limited transportation options in rural versus urban areas. People living in metro areas have alternative transportation, such as public transit or commuting by bike. Those in rural areas, on the other hand, won’t have those same options and are more likely to live farther from work or amenities. This makes a reliable car a necessity that many rural Americans are willing to pay — or borrow — a little more to get.

Among consumers who hold student loans, urban Americans’ balances are $7,528 higher than those owed by rural borrowers. With more city dwellers who attended college and earned a degree than rural residents, it makes sense that they would be borrowing more to pay for educational costs.

Credit cards: Differences in credit card borrowing are not as stark between rural and urban Americans. Among people who had a credit card balance, however, those living in metropolitan areas tended to owe more — $2,252 more, on average.

Urban cardholders’ higher balances can be partially explained by higher incomes in metropolitan areas. Rural households have median household incomes of $52,400, and urban households earn slightly more at $54,300. With higher incomes, urban dwellers might have a little more discretionary income and higher spending. 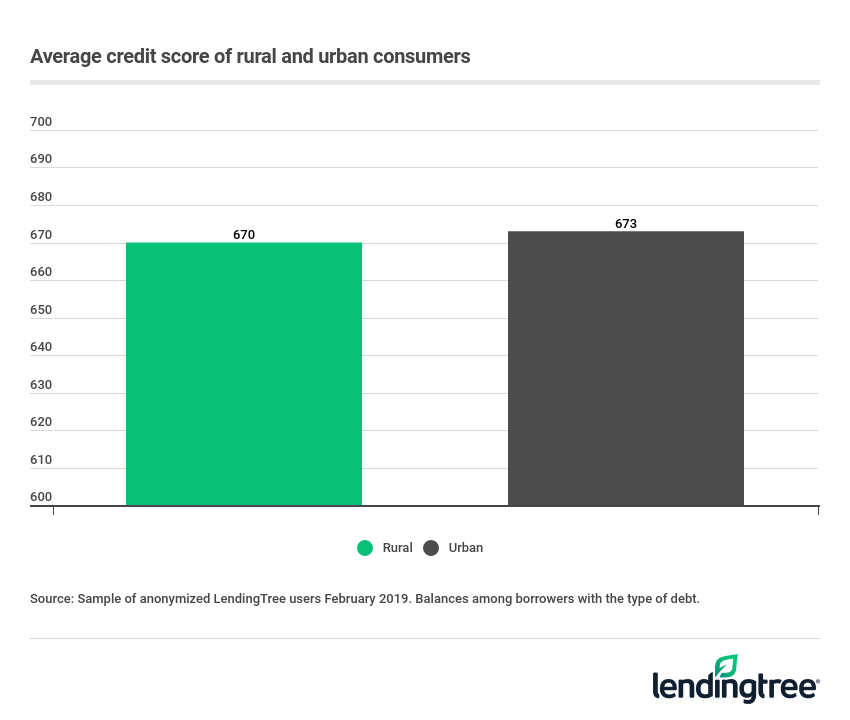 Despite having lower debt balances overall, rural consumers tend to struggle a little more with managing their debt. At least, that’s what a look at credit scores in rural versus urban areas indicates.

Credit scoring models are designed to weigh borrowers’ borrowing behaviors and responsible debt repayment. So lower credit scores among rural consumers indicate they’re not keeping up with credit commitments quite as well as those living in metropolitan areas.

Still, the difference between credit scores for the two demographic groups is fairly small, at just 3 points. And for both, these average scores fall just within the range of good credit scores. This is a sign that in both areas, most borrowers are keeping debt affordable and making payments in a timely fashion. 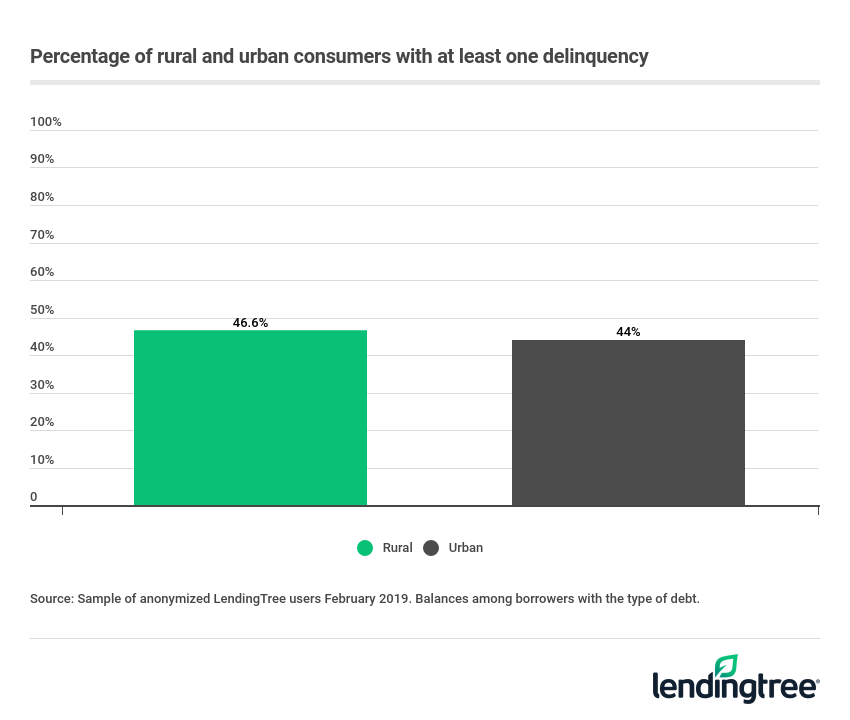 Another insight into responsible borrowing and repayment is taking a look at delinquencies. Rural consumers are more likely to have at least one debt delinquency listed on their credit report, at 46.6%, compared with 44% of urban consumers.

This difference is fairly small and falls in line with the differences in credit scores already discussed. But it does underline that when it comes to credit habits, people living in metropolitan areas tend to have more favorable handling of debt and payments compared with those in rural areas.

Managing debt and credit, no matter where you live

Whether you prefer country living or the faster pace of the big city, debt and credit are likely to be a big part of managing your finances. Fortunately, the core principles of responsible borrowing and building credit are the same no matter where you live:

As you take these steps, you’ll see the benefits. Responsibly managing debt will ease strain and stress in your monthly budget and improve your credit score in the process. And with a higher credit score, you’ll be able to borrow at affordable rates the next time you need a loan.

Americans living in both rural and metropolitan areas can secure their finances by paying closer attention to debt and credit situations and taking steps to improve them.

LendingTree used an anonymized sample of LendingTree accountholders from October through December 2018 to determine average and median credit scores and credit card balances of rural and urban consumers. Urban consumers were defined as residing within a U.S. Census Bureau Metropolitan Statistical Area (MSA), while rural consumers resided outside of these areas. LendingTree currently has over nine million users.

READ MORE
How to Stop Debt Collectors From Calling

Dealing with debt is stressful enough on its own without the harassing phone calls. Use these tips to learn how to stop debt collectors from calling.

READ MORE
How to Pay Off Debt in Collections

You have a number of options for paying debt in collections, from settling the debt to working out a payment plan. Here’s a rundown of all the possibilities.