There probably aren’t many people who gleefully pick up the phone or excitedly open a letter when a debt collector contacts them. The dread that often follows can certainly be exacerbated if the debt in question has already been paid or, worse, wasn’t owed in the first place.

Yet, plenty of people still receive these pesky notifications, and some collectors don’t quit calling, leading some consumers to complain to the Consumer Financial Protection Bureau (CFPB). In fact, from September 2018 to September 2021, the CFPB received 31.8 complaints per 100,000 adult consumers regarding debt collectors incorrectly pursuing them, according to a LendingTree analysis. That number triples in Georgia, the state where consumers are bothered the most by persistent and erroneous debt collectors.

Some states offer better protections to consumers facing these kinds of collectors, but not necessarily the states where consumers have the most problems.

When debt collectors come calling for a debt that may not actually be owed, there’s a good chance they’re calling a Southern area code. Eight of the 10 states with the most complaints about collections for debts not owed are in the South.

What’s worse for Georgia residents, the state has an F grade for consumer protection laws from the National Consumer Law Center (NCLC). Though no state earns an A from the organization, most states sit in the C and D grade range.

The NCLC grades states based on local laws protecting consumer property and assets from creditors and debt collectors. A worse grade indicates collections firms have more authority to seize property.

Texas and Nevada are two of just eight states that earn a B grade from the NCLC, but that doesn’t mean the collectors don’t call. Ranking No. 2 and No. 3 for complaint rates, Texas tallies 60.3 complaints and Nevada 57.6 per 100,000 adults.

Since consumer protection laws vary by state, LendingTree chief credit analyst Matt Schulz advises consumers to get a solid understanding of how things work where they live.

“There are federal laws that limit what collectors can do,” Schulz says. “Generally speaking, debt collectors can’t claim to be from the government, threaten to have you arrested for not paying your debt, force you to pay debt that you don’t owe or harass you verbally or physically. If that starts happening, don’t stand for it. Complain to the CFPB and make sure that you’re heard.”

Complaints rare in District of Columbia

On the other side of the rankings, the District of Columbia records the fewest CFPB complaints regarding irrelevant debts. Just 3.8 of every 100,000 residents have filed complaints in D.C., a fraction of the complaints in Georgia and nationwide.

Where debts are paid off but collectors keep calling

When broken out by type of complaint, the states where consumers complain the most about debt collections regarding fraudulent or otherwise nonexistent debt closely mirror the states with the most complaints overall.

Georgia and Nevada consumers still deal with more of these collections than much of the country, coming in at No. 2 and No. 3, respectively, for complaints about debt not owed.

What’s the deal with this mystery debt?

While the issue for these complaints is that consumers don’t believe they owe the debt about which collectors are asking, the reasons for those beliefs vary. The largest share of complaints nationwide (49.3%) comes from consumers saying the debt is not theirs. Another 30.4% say the debt is the result of identity theft. 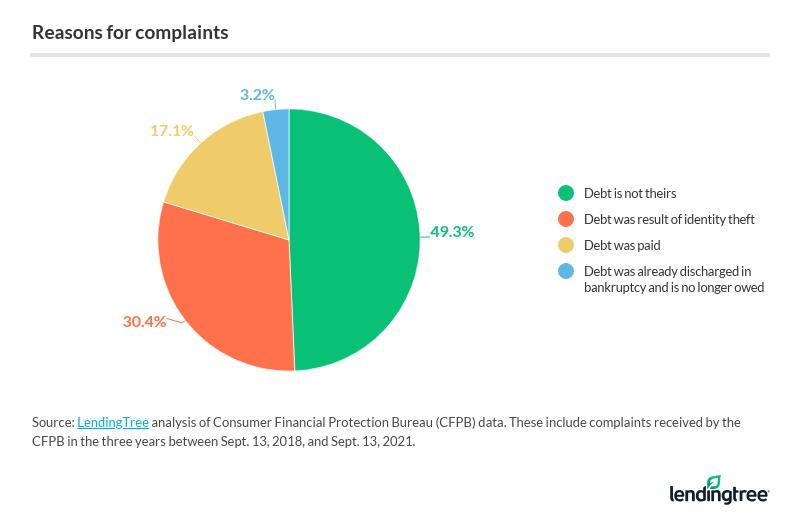 Around 1 in 5 consumers admit the debt may have existed in their name but is no longer owed, with 17.1% of folks saying they paid off the debt and 3.2% saying their debt was discharged through bankruptcy.

As for the debt that collectors are trying to solicit, 27.8% of consumers report being hounded over something other than the named categories, which include credit card, medical, auto, payday loan, mortgage and private or federal student loans.

Fraudulent or nonexistent credit card debt garners the second-most complaints, with 26% of attempted collections. A notable 23.5% of folks complaining about a debt collection are unable to identify the type of debt:

Older Americans and service members make up a notable share of victims of debt collection mishaps. Nearly 10% of folks who complained about incorrect or fraudulent debt collections are service members. Military members — especially retirees and veterans — are frequently targeted by scammers and often report greater amounts of financial loss than civilians, according to the Federal Trade Commission (FTC). Older Americans make up almost 3% of CFPB complaints about unsound debt collectors.

Protecting yourself from collectors

Managing debt can be difficult at any stage and for any reason, but staying on top of payments and in communication with your lender may help consumers avoid run-ins with debt collectors.

If you’re in a situation where your debt is headed to collections or you’re afraid of falling behind on payments, it’s important to talk to your lender and be honest about your situation.

“The lender might be willing to work with you by waiving fees, temporarily lowering interest rates or raising credit limits or even pushing back payment deadlines,” Schulz says. “There’s no guarantee they’ll work with you, but it is important to ask.”

In the direst of situations, debt consolidation or settlement may be an option, but make sure you understand the ramifications, like how they can impact your credit score.

Unfortunately in identity theft or fraud, there aren’t always foolproof ways to protect yourself from scammers. If you know the debt a collector is trying to get from you has already been paid or is fraudulent, Schulz advises consumers to make a complaint right away and keep an eye out for more vulnerable family members.

“The older folks, in particular, are often targeted by unscrupulous collectors hoping to squeeze some money out of innocent people,” Schulz says. “If that’s happening to someone you love, it is time to take action.”

Analysts reviewed collections complaints, specifically for attempts to collect debts not owed, made to the Consumer Financial Protection Bureau (CFPB) between Sept. 13, 2018, and Sept. 13, 2021, to determine the rates of complaint per 100,000 residents 18 and older in the 50 states and the District of Columbia. Researchers also gathered related statistics from these complaints.