While nearly two-thirds of Americans have donated to charity over the last year, 71% say that debt keeps them from giving more, according to new LendingTree research. It’s a sentiment that makes sense given that the average debt-carrying household in 2018 owed roughly $144,100.

Our team takes a deep dive into the numbers to shed light on the latest trends in charitable giving, from how much we donate to the types of charities we give most to. Here’s what we found.

Nearly 2 out of 3 Americans donated in the past year

It seems that most of us are actively giving to charity — close to two out of three Americans have donated within the last year. What’s more, over a third have given on more than one occasion.

Research suggests that a pay-it-forward effect may be at play, helping to boost rates of charitable giving. Acts of kindness and generosity appear to be contagious and can spread up to three degrees — from person to person to person — according to researchers at Harvard and the University of California, San Diego. In other words, giving may inspire others to do the same. 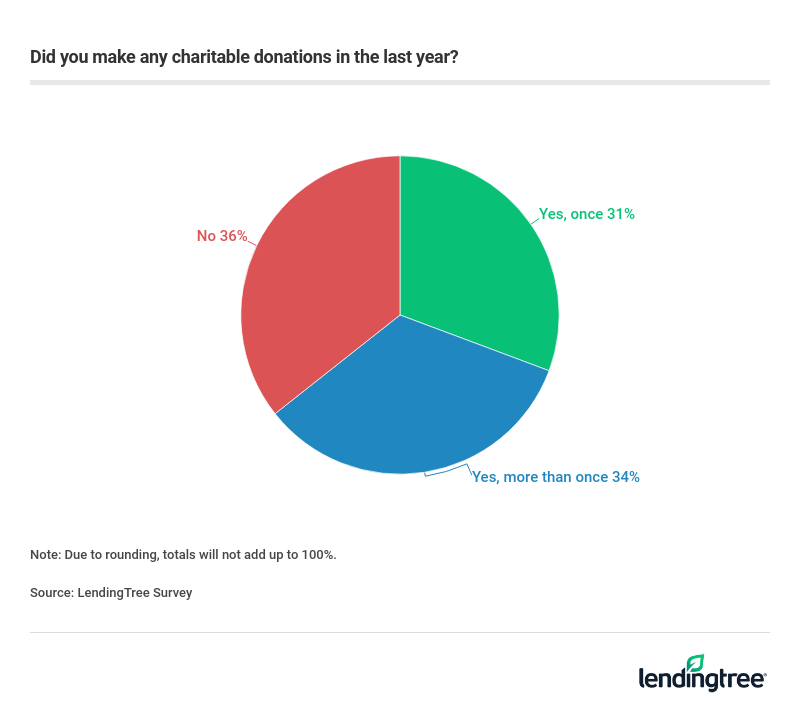 But debt is holding back charitable giving

Seventy-one percent of those surveyed said their debt prevented them from donating as much as they would like. And 56% of survey respondents cited a lack of cash as a barrier to charitable giving. 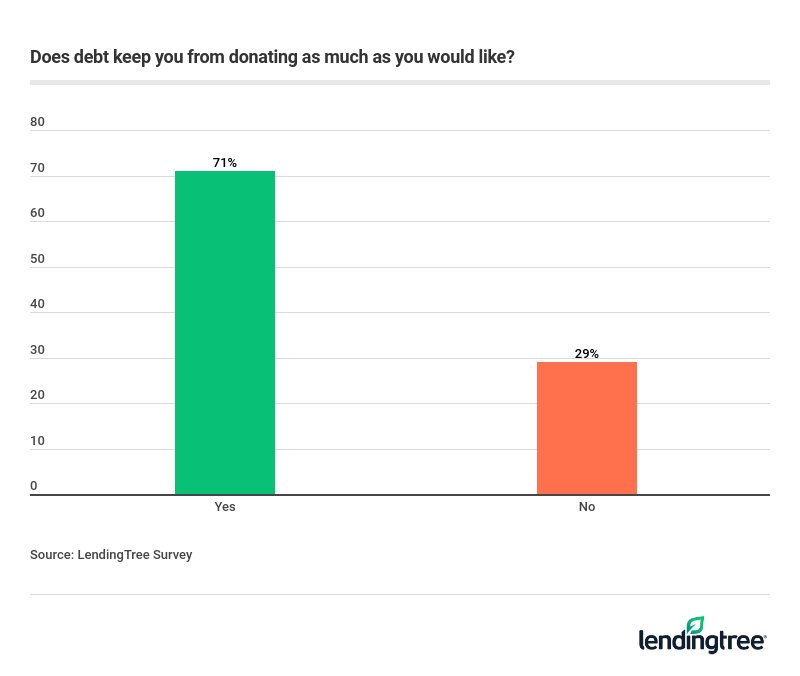 If debt is standing between you and charitable giving, you may consider these two options:

What causes are Americans donating to?

Americans are donating to a variety of charitable organizations. The top three categories deal with animals, health, and human services. Religious organizations come in right behind those, followed by environmental causes.

To some degree, the wide range of causes here can be chalked up to personal taste. According to research from the University of Kent in the United Kingdom, donors typically support organizations that are either in line with their own preferences or help people or causes they relate to. People are also more likely to donate when they know their money will help a specific person — as opposed to a general cause. 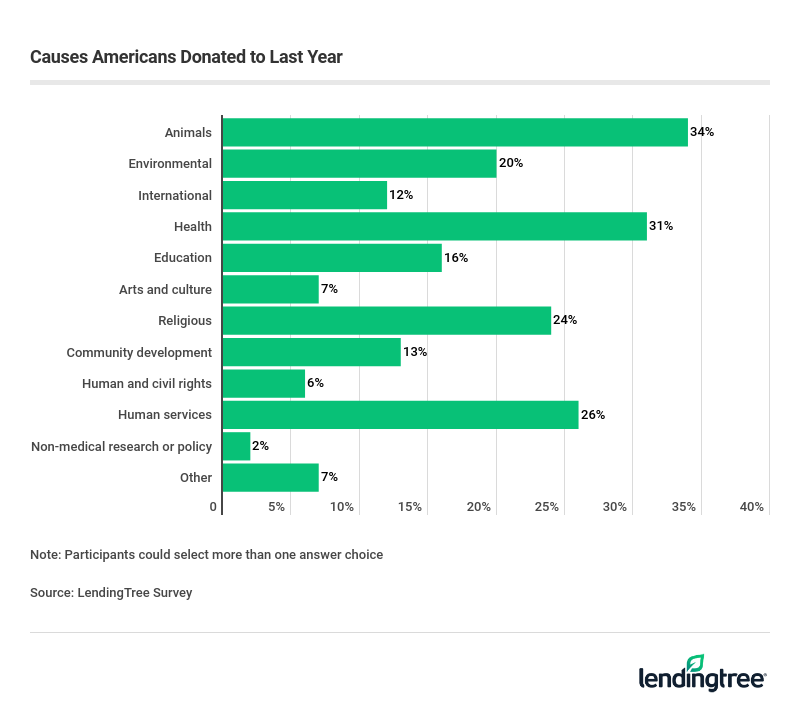 This survey revealed some pretty interesting generational trends when it comes to charitable giving. Members of Gen Z have the highest incidence of monthly donations to the same charity. On the flip side, despite seeing a decrease in their debt burdens, baby boomers aren’t making as many recurring monthly donations. 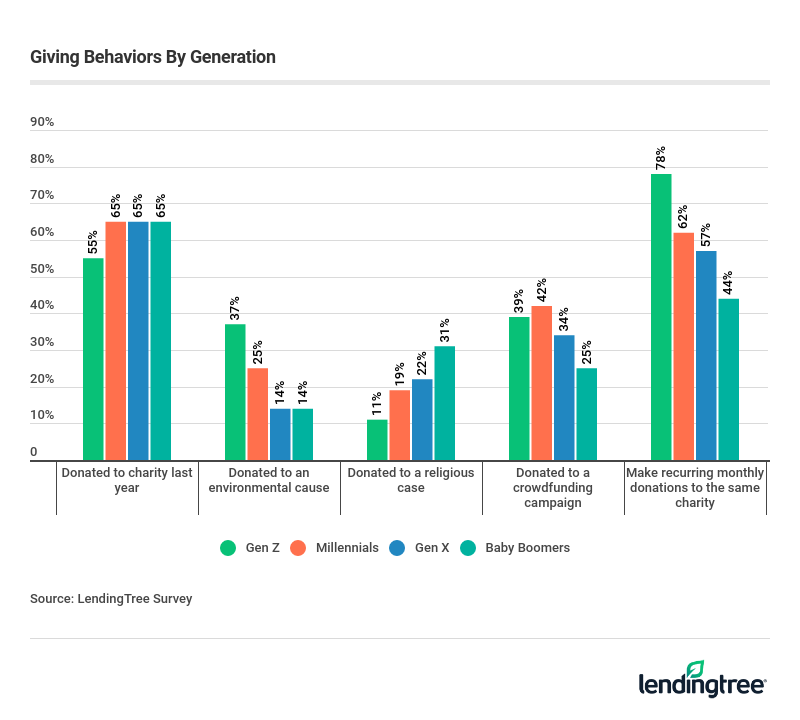 The value in charitable giving

Charitable giving pulls double duty — it makes you feel good and may count as a tax deduction. This means you’re reducing your taxable income and, as a result, bringing down your tax bill. The IRS allows you to write off donations made to 501(c)(3) non-profit organizations, so be sure to hang onto your receipts throughout the year.

Plus, the benefits of altruism go beyond your tax liability. According to Harvard researchers, spending money on others is more satisfying than spending it on ourselves, regardless of our culture or income level.

To incorporate charitable giving into your financial life, consider folding it into your monthly budget. After accounting for fixed expenses and setting money aside for financial goals (like paying down debt and saving for retirement), a portion of what’s left can be earmarked for monthly giving.

LendingTree commissioned Qualtrics to conduct an online survey of 1,079 Americans, with the sample base proportioned to represent the general population. The survey was fielded September 11-13, 2019.

For the purposes of this survey, we defined generations as follows:

Members of the Silent Generation (ages 74 and older) were also surveyed, and their responses are included within the total percentages among all respondents. However, their responses are excluded from the charts and age breakdowns due to the smaller population size among our survey sample.

The majority of Americans have donated to charity in the past year, but many say debt is keeping them from giving more. Read our study’s finding here.