You are using an outdated browser. Please upgrade your browser to improve your experience.
Best Debt Consolidation Loans in October 2022
How Does LendingTree Get Paid?

Consumer debt is about as American as baseball. As people in the U.S. get older, the hope is that their debt balances will shrink as their incomes expand. In reality, those debt balances often transform over time — increasing or decreasing but mostly changing in type.

Researchers examined more than 3 million anonymized credit reports from LendingTree users in the 100 largest U.S. metros to compare how consumers carry debt across generations and where consumers have the highest balances. 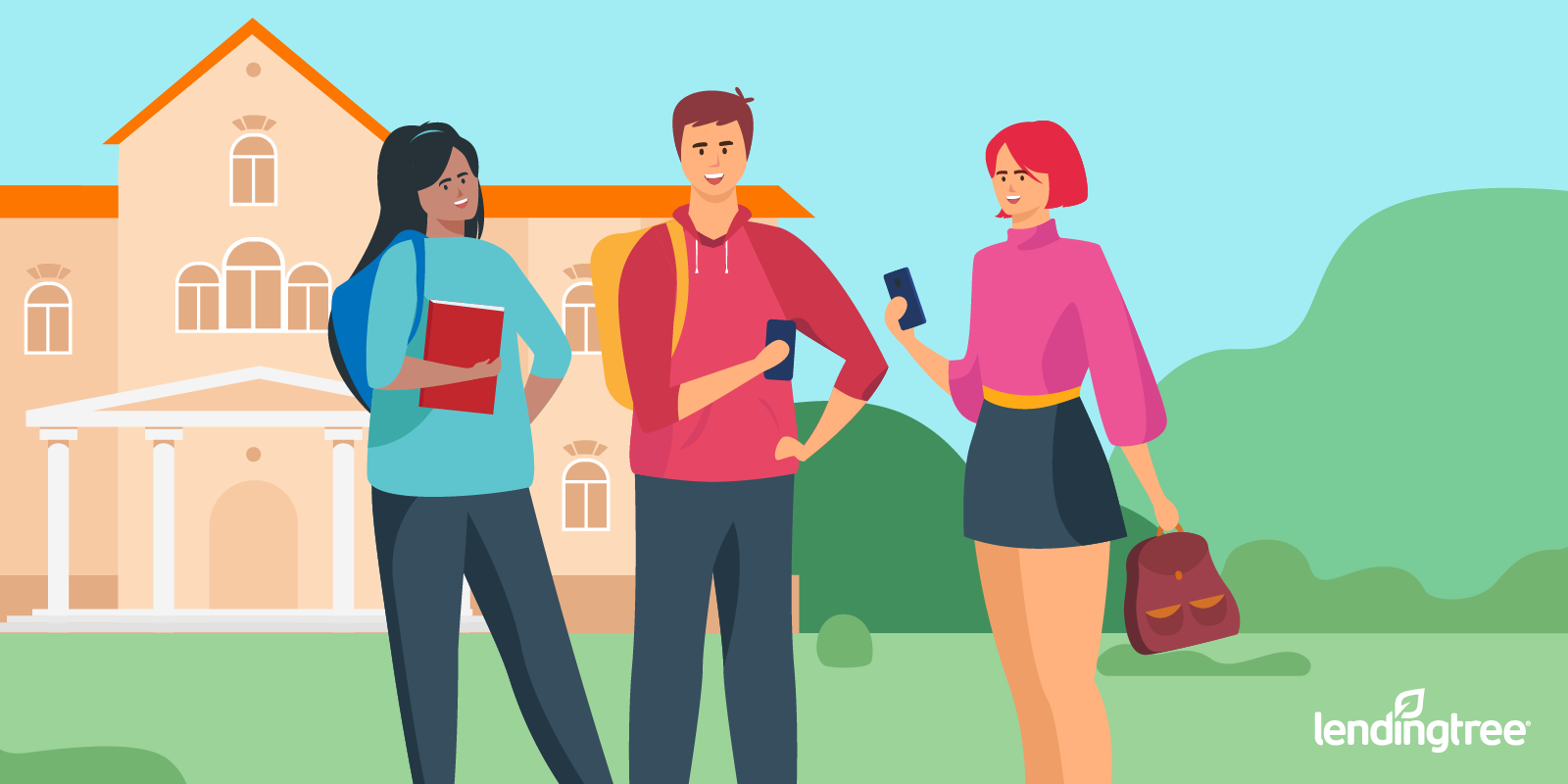 Generation Zers get their feet wet with borrowing

The youngest generation that LendingTree researchers analyzed has already begun wading into the world of debt. Across the 100 largest U.S. metros, an average of 85.2% of Gen Zers (primarily ages 18 to 24) who have a credit report have some amount of non-mortgage debt, with median balances averaging $9,176.

In some metros, debt among Gen Zers is more common. Gen Zers are most likely to have non-mortgage debt in the following metros:

And though debt may be more common in these metros, their balances aren’t the biggest. Gen Zers in the following places have the highest median non-mortgage debt balances:

How Gen Z debt breaks down

Though many Gen Z consumers may be college-aged, student debt isn’t the most common type of debt among this group. LendingTree’s analysis shows Gen Z consumers are more likely to have credit card or auto loan debt than student loan debt.

Though members of Gen Z may be the least likely to have auto loan debt compared with their elders, Gen Zers with auto debt have a median balance of $14,573.

Finally, despite most being college-aged or recently graduated, Gen Zers have the smallest share of student loan borrowers among the generations analyzed. Just 28.5% of young consumers, on average, have student debt across the 100 largest metros.

The young generation has the advantage of having seen their older peers struggle for years as the student debt crisis unfolded. ​​LendingTree chief credit analyst Matt Schulz thinks they took those lessons to heart.

“The last thing Gen Zers want is to follow in the footsteps of millennials and Gen Xers and spend their young lives drowning in debt,” he says. “Gen Zers know just how expensive college is, and they’re taking a hard look at their options in hopes of avoiding student loan debt.” 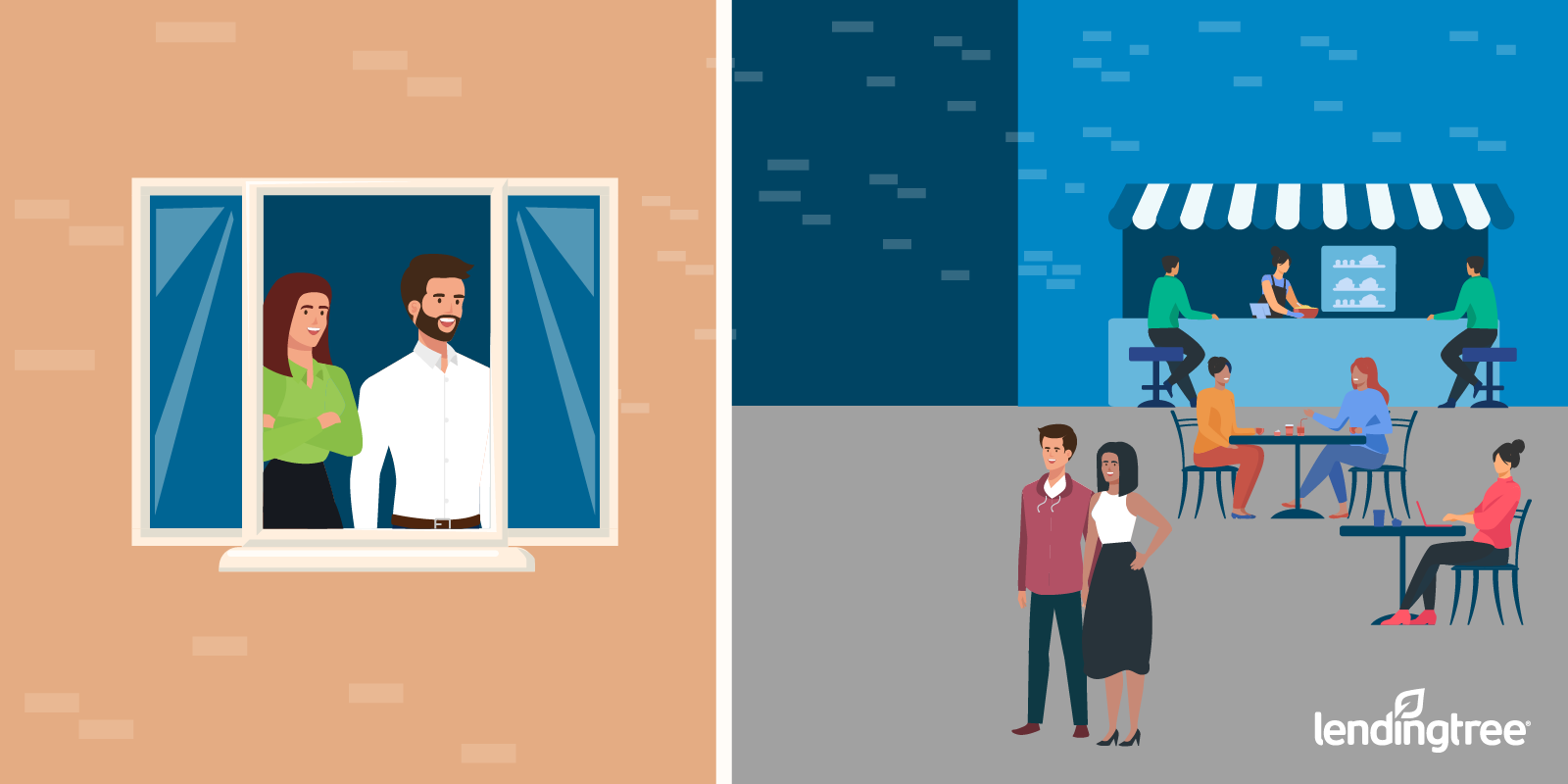 Millennials in the South may owe a bit more debt as the 10 places with the highest median non-mortgage debt balances come from Southern states.

“Southern debt has a lot to do with income,” Schulz says. “Yes, it may cost less to live in the big Southern metros than in the big Northeast metros, but the incomes are significantly lower, too.”

Millennials in the Carolinas have the highest median non-mortgage debt balances:

Columbia and Charleston also come close to having the highest percentage of millennials with non-mortgage debt, but McAllen, Texas, just edges them out:

How millennial debt breaks down

Millennials follow the same pattern as other generations by most frequently having credit card debt, followed by auto loans and student debt. Though around half of Gen Z consumers in the metros analyzed have credit card debt, that figure jumps to 69.7% for millennials.

California millennials seem to put a lot of charges on their plastic as four metros from the Golden State make the top 10 places where millennials’ median credit card balances are highest. The top three are a bit more spread out:

Perhaps not everything is bigger in Texas, but auto loan debt for millennials might be as the four metros where millennials owe the most on auto loans are all in the Lone Star State.

However, millennials are most likely to have outstanding student loan balances, with an average of 37.5% of consumers in the largest metros owing a median of $23,518 in student loan payments. Metros that are home to numerous colleges and universities are also home to the highest median student debt balances among millennials:

The most debt-burdened generation, an average of 95.2% of Gen Xers in the largest U.S. metros currently have non-mortgage debt. Given these consumers are 41 to 56 years old, Schulz says it’s not too astounding to see this group carrying so much debt.

“Part of the reason for that is that they’re further along in their careers and more financially stable and may be more likely to be able to manage debt,” he says. “For example, they might be more likely to finance a nicer car than they could have when they were younger.”

Unsurprisingly, major metros where costs tend to run higher are home to the Gen Xers owing the largest median balances of non-mortgage debt:

Debt occurs more frequently among Gen Xers in New York, with four metros among the top five of the highest percentage of consumers with non-mortgage debt. However, Raleigh, N.C., takes the top slot:

How Gen X debt breaks down

Credit card debt weighs pretty heavily on these Gen Xers born between 1965 and 1980, with a median balance more than double that of millennials at $3,568.

Though baby boomers are slightly more likely to have credit card debt in the largest metros — and larger balances — it’s very common for Gen Xers, with an average of 78.2% of consumers carrying balances. Metros whose Gen Xers have the highest balances lay along the coasts:

Auto loan debt is more common among Gen Xers than any other generation, with an average of 55.3% of consumers owing on auto loans throughout the 100 largest metros. Median balances across the three oldest generations don’t range too far apart, but Gen X retains the highest overall at $19,748.

But Gen Xers and millennials are in good company, as the same three places are home to both generations’ highest median auto loan balances:

Student debt is less common for Gen Xers than millennials and Gen Zers, but those with balances — an average of 28.1% of Gen X consumers — owe more than any other group with a median balance of $34,314.

As with their millennial peers, Atlanta and Durham, N.C., are home to some of Gen X’s highest median student debt balances, but borrowers in Jackson, Miss., owe slightly more than those in D.C.:

The wealthiest generation still has their fair share of debts to pay off, as an average of 92.9% of baby boomers in the largest metros owe non-mortgage debt. The oldest consumers analyzed here hold slightly more non-mortgage debt ($28,672) than millennials but less than Gen Xers.

As with Gen Xers, boomers (ages 57 to 75) in the nation’s capital have the highest median balances, but Baltimore replaces Denver for this generation’s top three:

Similar to Gen Xers, New York dominates the rankings when it comes to debt, as boomers contribute all three of the metros with the highest share of people with non-mortgage debt:

How baby boomer debt breaks down

With credit card debt burdening an average of 81.4% of baby boomer consumers, the generation has the largest share of people dealing with card debt, along with the highest overall median balance at $3,958.

Like Gen Xers, boomers in Bridgeport, Conn., have the highest median balance of the metros analyzed:

Auto loan debt is slightly less common for baby boomers than younger generations, but a significant percentage of consumers — 47.6% on average — have outstanding loans with a median balance of $17,683.

Texas metros again top the ranks, with boomer consumers owing the most on auto loans in McAllen and El Paso:

And though it has the smallest share of borrowers, 13.1% of the baby boomer generation in the largest metros has student loan debt. While the share of consumers in student debt is less than half than Gen X’s, boomers with student debt owe a median of $29,444 — just under $5,000 less than what Gen Xers owe.

Boomers in Washington, D.C., have the highest median balance: 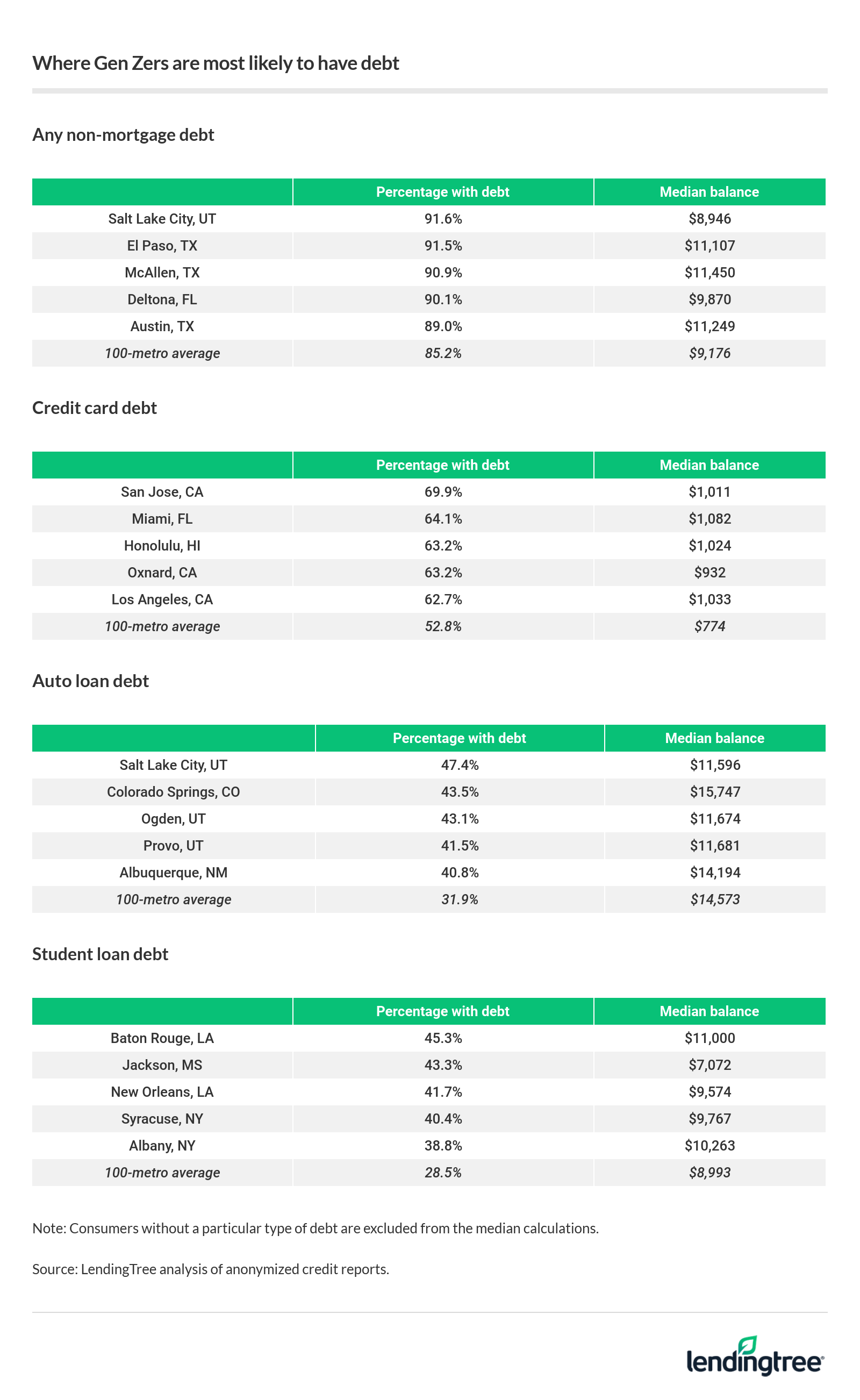 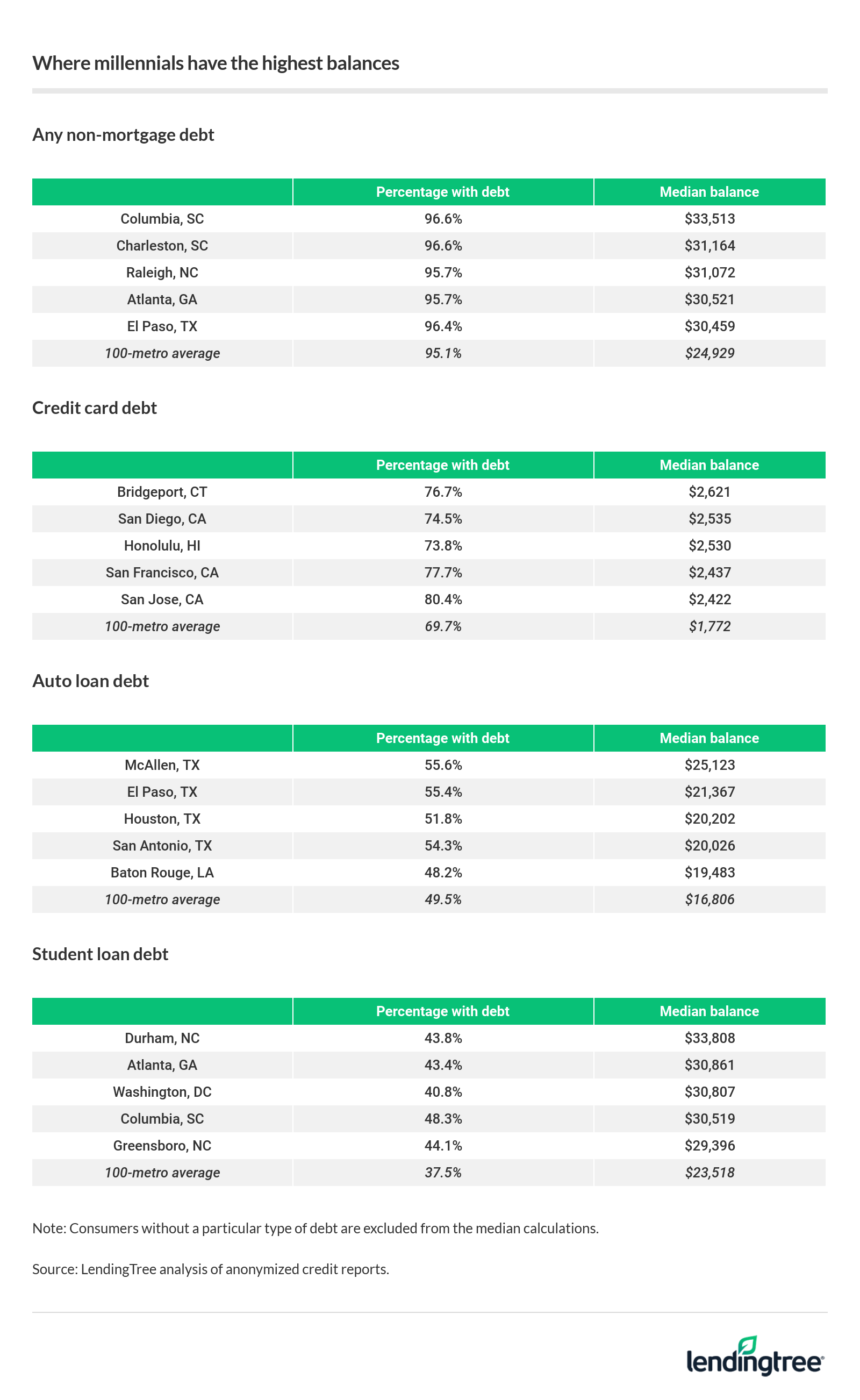 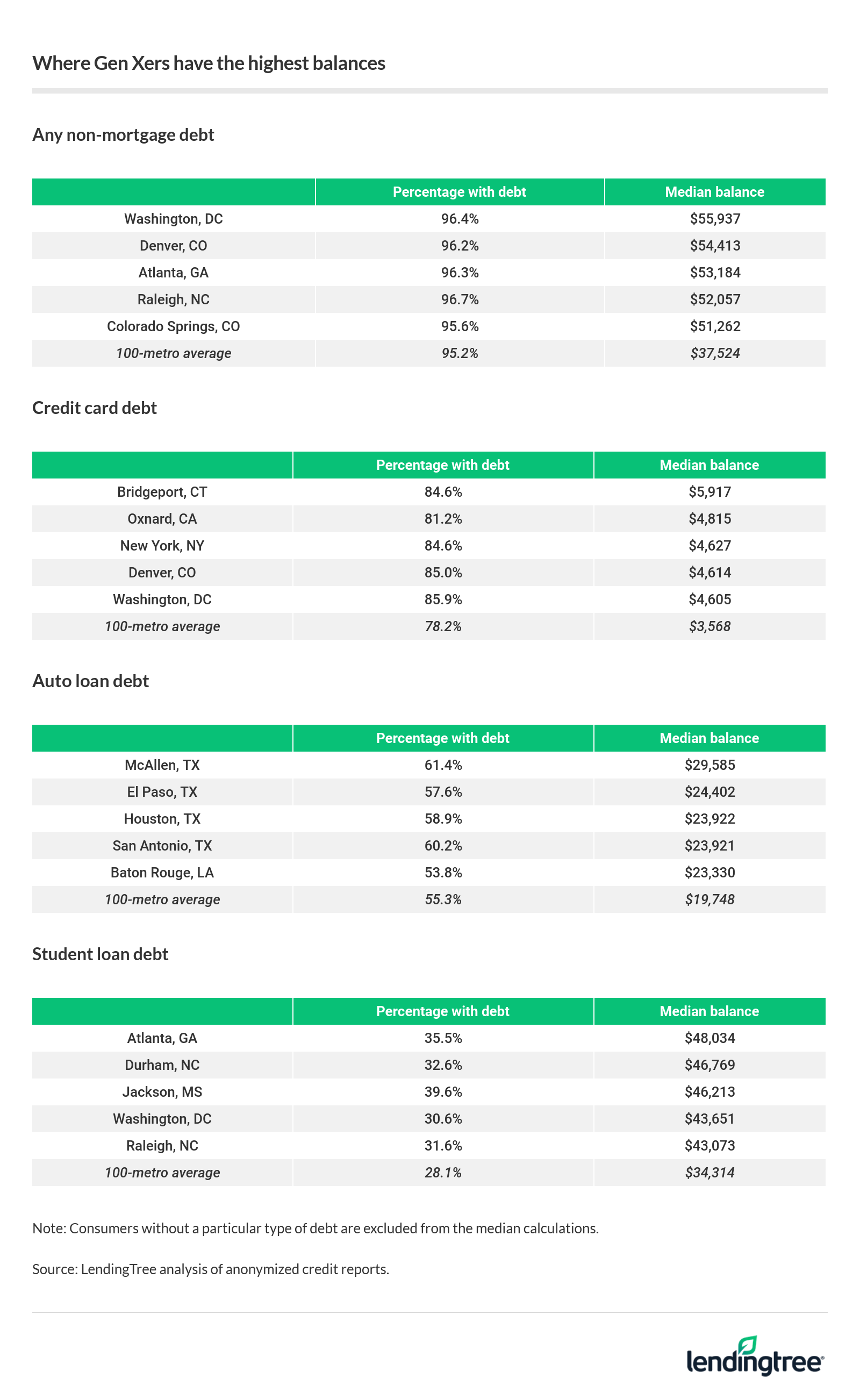 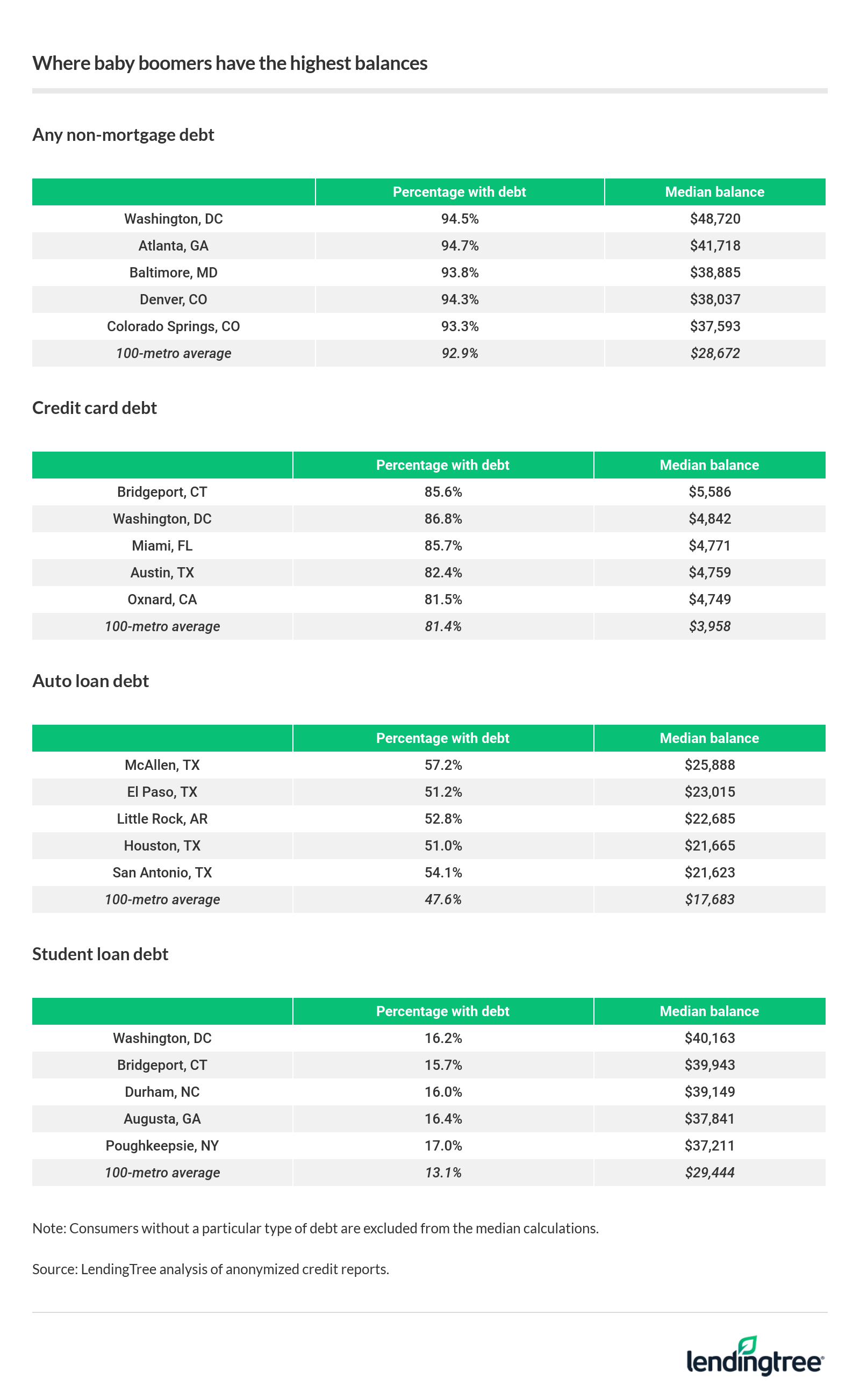 Analysts used more than three million anonymized credit reports from LendingTree users who live in the 100 largest metropolitan statistical areas (“MSAs”) to calculate the following, aggregated by generation and MSA:

The generations are defined as:

Only those with credit reports are included, and most members of Generation Z in our analysis are at least 18 years old.