Best Places for a Fresh Start

Whether you are looking to start fresh after paying off significant debts or you’re ready to launch a new career in a new place, the likelihood of your success can depend (in part) on the social and economic conditions you may find yourself in.

So how can someone maximize the opportunity to rebuild a full and prosperous life? Maybe by living in one of the cities that topped the rankings in our new study, which ranks the best places for a fresh start.

For the study, we analyzed eight variables in the largest 50 metros in the U.S. to determine which cities would most likely give someone the boost they need to start a career or build their finances from scratch.

First, we looked at some of the obvious factors that are important to anyone’s financial recovery, such as the local median income, the cost of housing, as well as whether the state has laws to protect debtors from aggressive collections and penalties. We were particularly interested in state laws regarding debt collection because sometimes strategies like debt consolidation or refinancing to lower rates aren’t enough to manage all of your debt liabilities.

We also wanted to see what opportunities there might be for people seeking a solid job and income. For that, we looked at the percentage of people in these metros who are between the ages of 35 and 64, single, employed and have health insurance coverage. We also considered what percentage of this age group is currently enrolled in school because that can indicate the opportunities for a later-in-life career change.

Lastly, to get an idea of how well people in an area are recovering from financial calamity, we wanted to know how quickly credit scores are rising after a bankruptcy. We were able to do this with our proprietary data by calculating the average credit score, on a geographic basis, of LendingTree customers who declared bankruptcy between three to four years earlier. 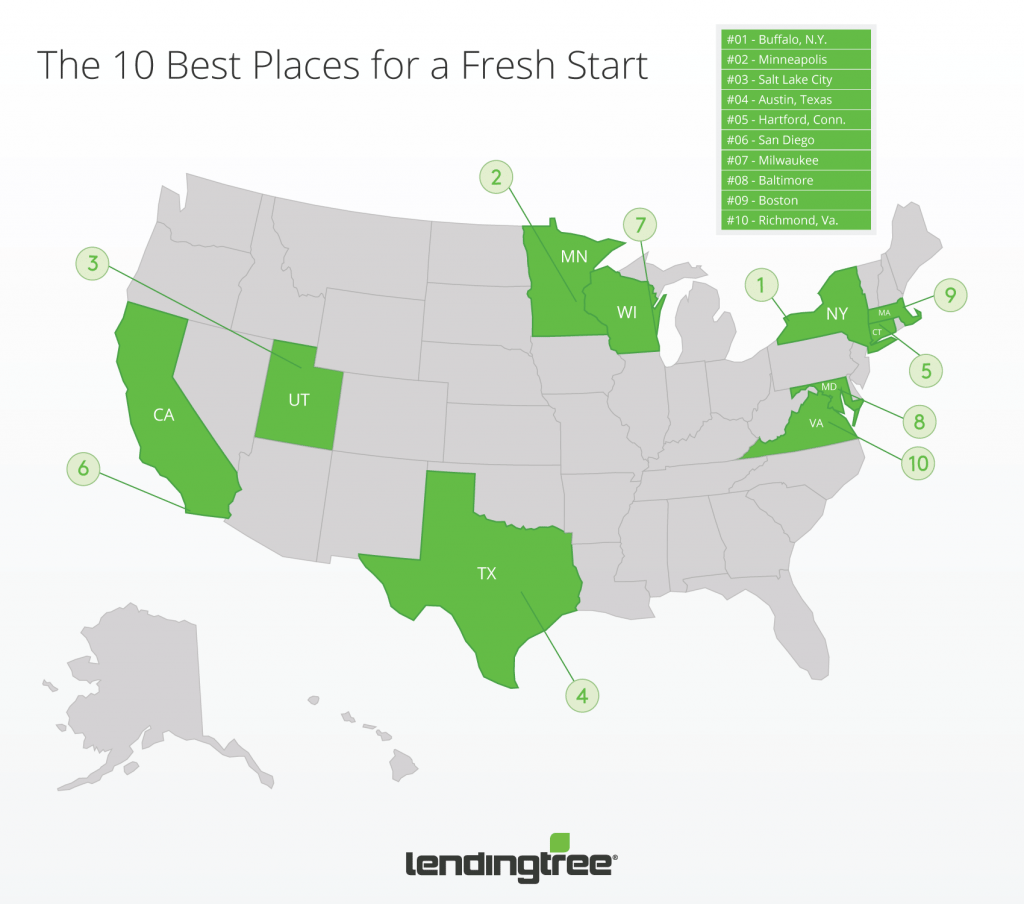 1 – Buffalo, N.Y.
Buffalo ranks poorly in two of our metrics: at $52,303, median income is the 7th lowest, and only one other city has fewer students over the age of 35. But Buffalo performs exceedingly well everywhere else. $738 is the lowest median rent among the 50 cities we reviewed, 94% of adults over the age of 35 are insured (second highest) and residents who declared bankruptcy three years prior have an average credit score of 664. That’s still subprime, but it’s a tie for the highest score for the cities we reviewed, and it suggests that conditions are favorable for financial recovery. Compared with the other places, unemployment for over-35s was about one percent lower (4.6%), and 2% more over-30s are unmarried (40%), which are nice odds for anyone looking for a new partner. Lastly, the National Consumer Law Center (NCLC) gives New York State a “B” grade for having some of the strongest protections for debtors (no state received an “A”). Final score: 67.6

2 – Minneapolis
At just 3.7%, Minneapolis’s exceedingly low unemployment rate for citizens between the ages of 35 and 64 help push the city to the no. 2 spot. Not only are most over-35s employed, but Minneapolitans also earn a median salary of $70,915, the 8th highest among the cities we reviewed, 94% have health insurance and median rents are relatively low at $963 (and exceptionally low for communities with median incomes over $66,000). Those factors may help explain why locals who declare bankruptcy work their way up to an average credit score of 656 (650 is the average) after three years. Minneapolis ranks more on the mediocre side in a couple of areas: Minnesota received a “C” grade from the NCLC, and only 2.8% of over-35s are in college, which is just under the 2.9% average for the cities we reviewed. On the downside for singles, only one of three people between the ages of 35 and 64 are unmarried. Only San Jose and Raleigh have fewer single people. Final Score 62.9.

3 – Salt Lake City
Based on the city’s scores, one has to wonder whether people are explicitly moving to Salt Lake for a new start. Only two other cities have more over-35s enrolled in school (Virginia Beach and Washington , D.C.), and only five have more unmarried over-35s (New Orleans has the most). Maybe that’s because Salt Lake City has the lowest unemployment rate for over-35s of any city reviewed (3.6%), and higher-than-average median income of $64,564 for the metro. That combines nicely with a moderate median rent of $967. But Salt Lake City isn’t a complete panacea: 14.6% of over-35s don’t have health insurance , and Utah offers poor protection to debtors, all of which could be factors in the slow recovery for people who file for bankruptcy: three years out, they have an average credit score of 646, which is in the lower third of cities we reviewed. Final score: 62.6

5 – Hartford, Conn.
Hartford ties with Buffalo for the highest average credit score three years after bankruptcy (664). 93.3% of residents between the ages of 35 and 64 have health insurance, which is the 4th highest among the cities we reviewed, and the median income is the 7th highest at $71,379. Those superlative results and lack of bottom-of-the-barrel results leapfrog Hartford to the no. 5 spot on the list, despite subpar showings in the other areas. Connecticut’s “C” grade for debtor protection from NCLC is slightly below the “B-“ average for the cities on our list, as is the 5.8% unemployment rate for over-35s. Rents are a bit high at $1,028, 36.4% of over-35s are single (about 1.5% less than the average) and 2.6% of over-35s are enrolled in school, which comes to about 11% fewer than the average. Final score: 58.9 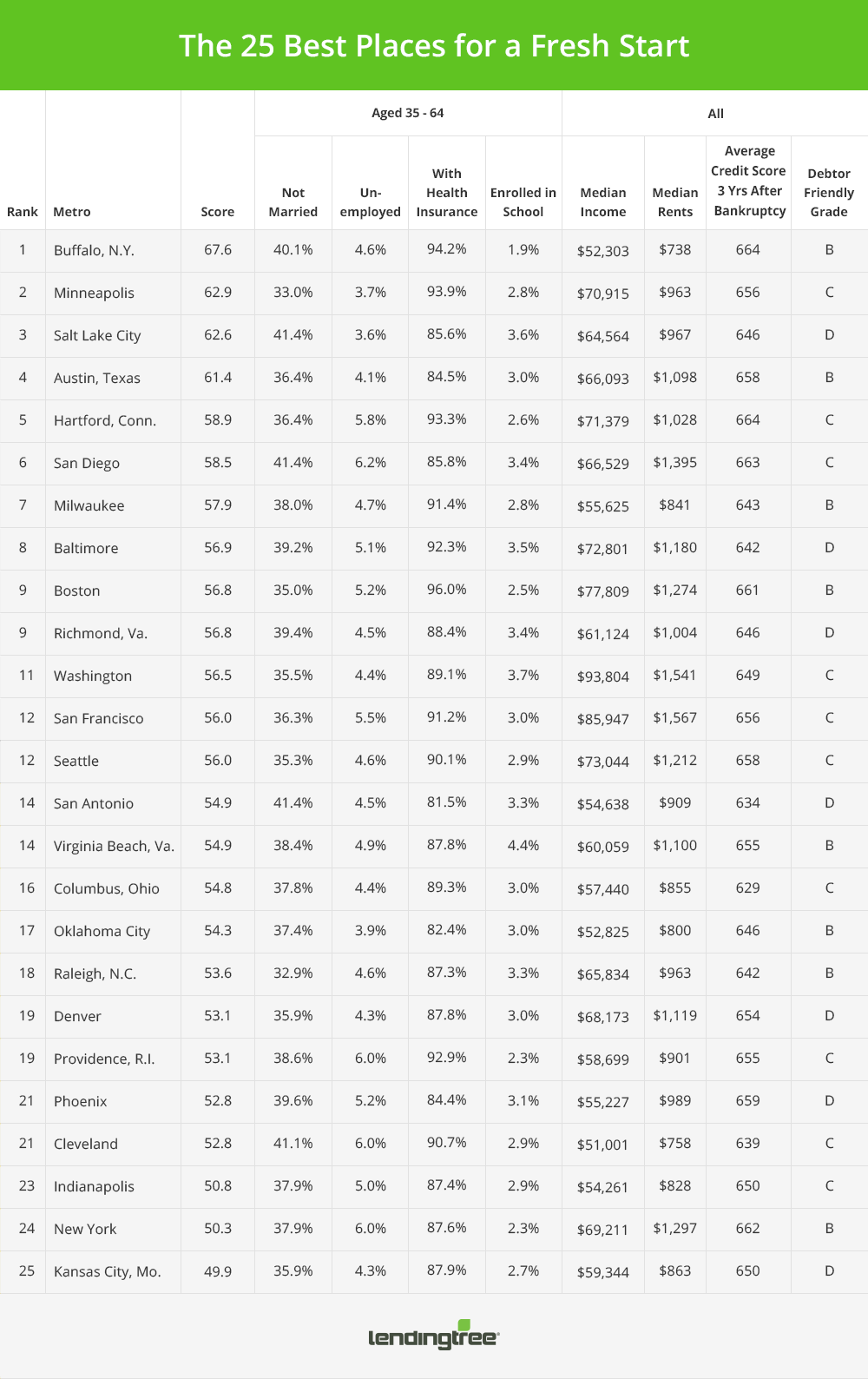 50 – Birmingham, Ala.
On the upside, median rents are low in Birmingham at $806, which is the 7th lowest of the cities we reviewed. Birmingham is pretty mediocre in a few other areas: Among people between the ages of 35 and 64, just under a third are unmarried, 5.1% are unemployed and 87.3% have health insurance. Birmingham does very poorly in a few areas: Only 2.3% of that same group are enrolled in school (the third fewest of the cities we reviewed), and median income for everyone is $50,529 (the 5th lowest). Most troublesome, Alabama received an “F” from the NCLC for poor debtor protections, and residents have an average credit score of 633 three years after a bankruptcy (only Columbus, Ohio has a lower average). Final score: 32.9

49 – Riverside, Calif.
The biggest ding against Riverside is the 8.1% unemployment rate for people between the ages of 35 and 64, which is the highest of all the cities we reviewed. That might explain why only 81.7% of that same age group has health insurance (compared with an average of 87.1%). Median income for all groups is pretty middle of the pack, at $56,295, which is the 20th lowest, but median rents are the 10th most expensive at $1,176. 36.1% of over-35s are unmarried, compared with the 38% average of cities we reviewed, California has middling debtor protections, and people make a decent recovery after bankruptcy, building an average credit score of 651 after three years (the midpoint of cities on our list). On a better note, at 3.2%, Riverside grabs the no. 10 spot for over-35s in enrolled in school. Final score: 35.8

48 – Miami
Good news for singles! 36.4% of people between the ages of 35 and 64 are unmarried, which is the third highest in the cities we examined. Also, people seem to be making good recoveries three years after a bankruptcy, with average credit scores of 658 (the 8th highest). That’s pretty remarkable considering how poorly Miami fares in every other area. School enrollment for over-35s is a moderate 2.8% (2.9% is the average among the cities on this list), but median incomes of $50,064 are the 3rd lowest, median rents of $1,182 are the 8th highest, 6.8% unemployment for over-35s is the 4th highest and at just 74.7%, Miami has the lowest health insurance coverage for over-35s. Final score: 36.4.

47 – Orlando, Fla.
The third lowest health insurance coverage for people between the ages of 35 and 64 (80.4%), the 4th lowest median income ($50,183) and the 10th highest over-35 unemployment rate (6.4%) of the 50 cities we reviewed brought Orlando down to the 4th lowest spot on the list, despite generally mediocre showings in other categories. Rents are a bit high at $1,063 (15th highest), and over-35 school enrollment is a bit low at 2.9% (22 lowest). Florida received a middling “C” grade from NCLC for debtor protections, people who file for bankruptcy have an average score of 654 three years out (19th highest). Final score: 37.3 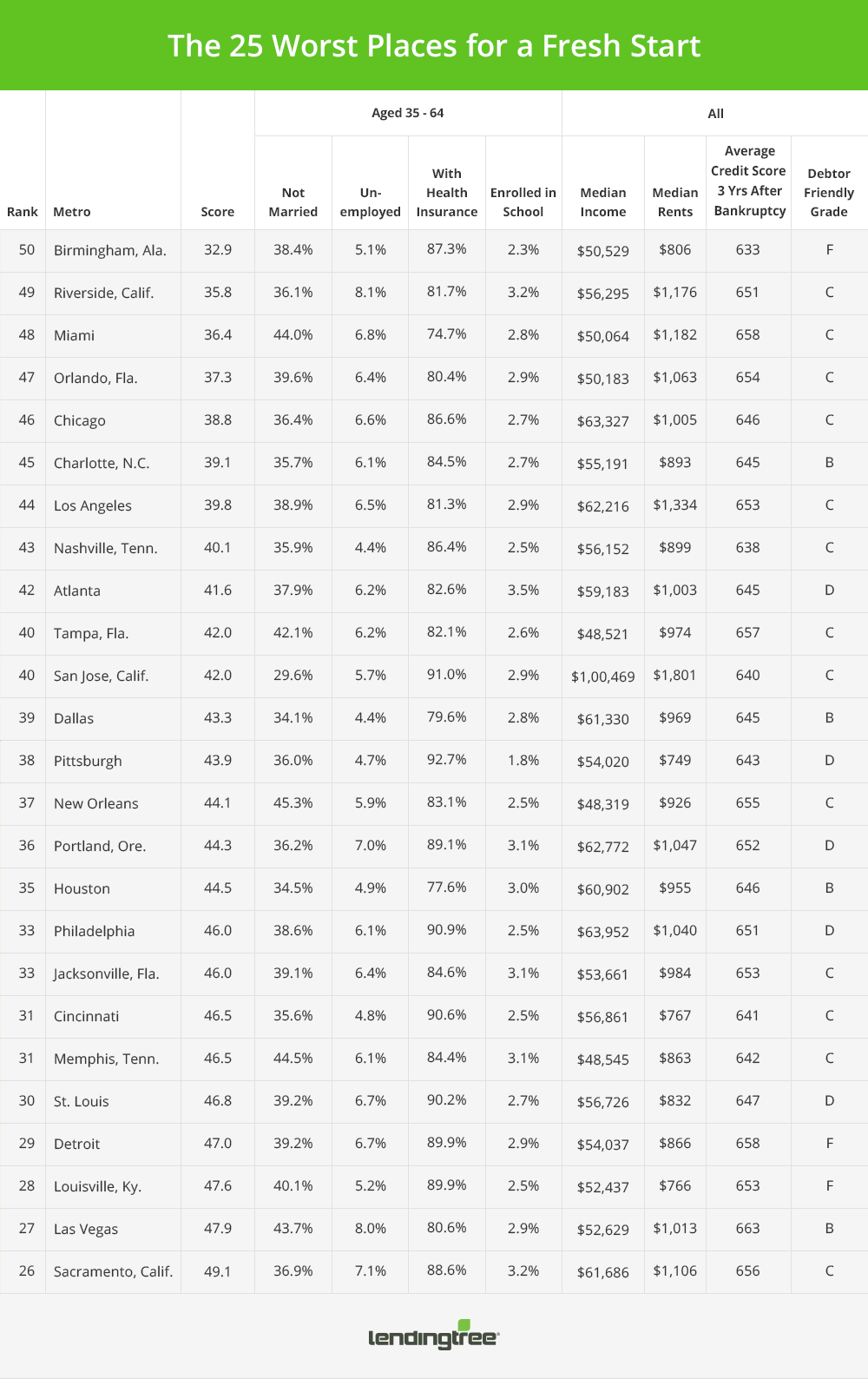 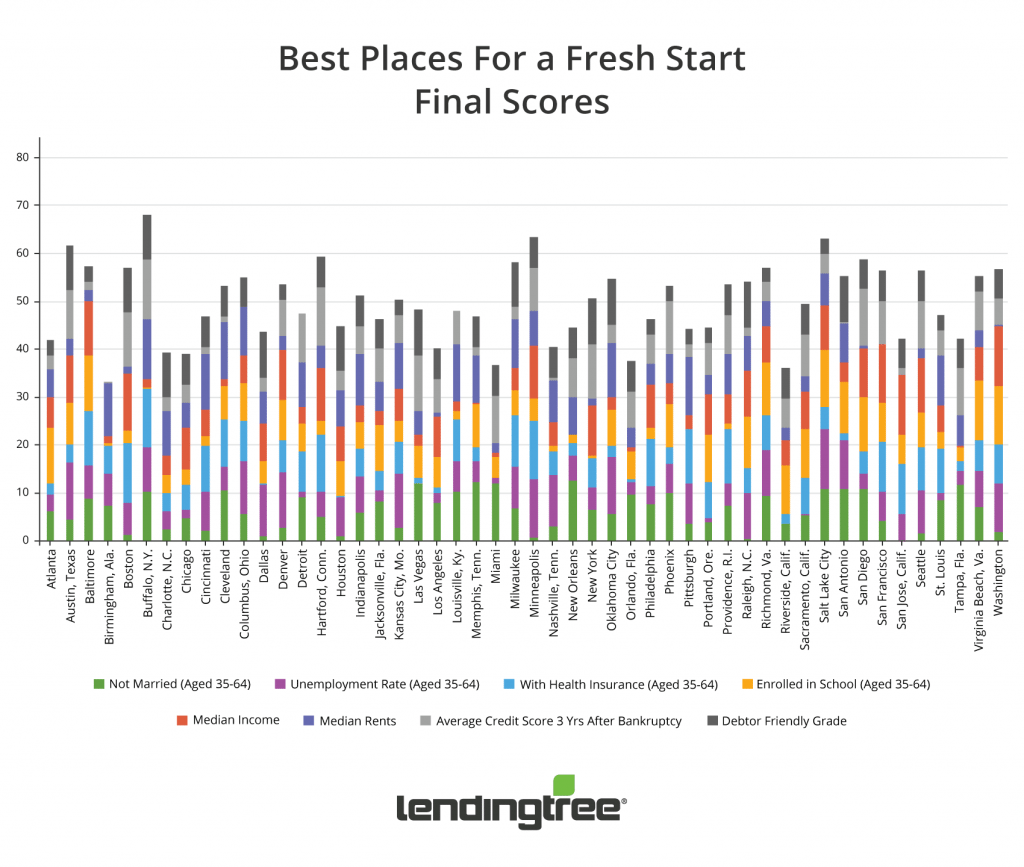 The following eight elements were ranked on scale of 100 for the 50 largest metropolitan statistical areas in the U.S. The sum of the inverse rankings was divided by eight for a highest possible score of 100 and a lowest possible score of zero. The actual highest score was 67.6 and the lowest was 32.9.

READ MORE
Fannie Mae and Freddie Mac: What You Should Know

Fannie Mae and Freddie Mac play a key role in fueling the U.S. mortgage market and keeping mortgage rates affordable. Find out how.