Majority of Americans Think US Is Headed in Wrong Direction, With 15% Having Considered Leaving Due to Politics

The midterms are approaching, and political tensions are high. Ahead of the impending election, the latest LendingTree survey reveals that most Americans believe the country is off track politically. And although mortgage rates continue to climb, a portion of consumers say they’d consider moving to a new part of the country because of conflicting political beliefs — or even leave the U.S. altogether.

We asked more than 1,500 U.S. consumers about how the political climate may impact where they want to live. Here’s what we found.

61% of Americans think that the U.S. is off track politically

It’s been a pessimistic year for consumers. Economic concerns and fears of a recession are high, and political beliefs haven’t been spared. In fact, just over 3 in 5 (61%) Americans feel the U.S. is off track politically. Meanwhile, just over a quarter (26%) agree with the country’s direction, and another 13% are undecided. 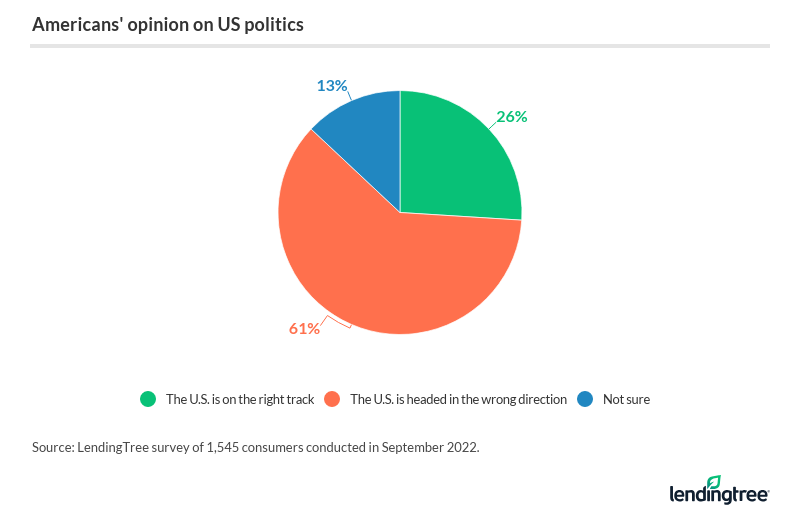 This comes as consumers are most likely to consider their political views as moderate. To break it down:

With Republicans the most likely group to say the country is off track politically, more Americans are shifting toward increasingly conservative beliefs. Although nearly half (49%) of Americans say their political opinions haven’t changed over the past two years, 19% say they’ve become more conservative. That’s particularly true for consumers earning between $50,000 and $74,999 annually. Of this group, a quarter (25%) say they’ve become more conservative.

Some Americans’ indifference toward political parties is also evident, as 18% say they’re leaning more toward independent or unaffiliated political beliefs. The lowest-earning consumers are the most likely to feel this way — 1 in 5 (20%) of those with household incomes below $35,000 say they’ve become more independent or unaffiliated. Comparatively, just 15% of consumers say they’re more liberal than two years ago.

15% have considered leaving the U.S. due to politics 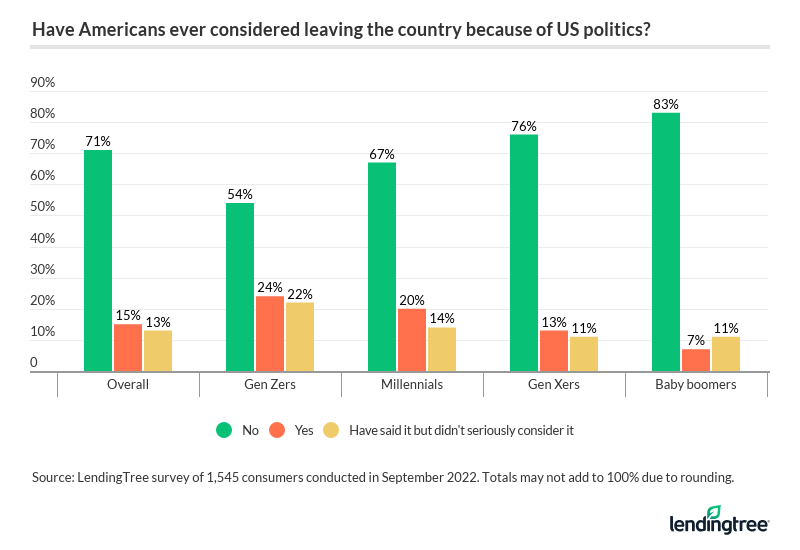 Almost a quarter of Gen Zers (24%) say they’ve considered leaving the U.S. because of national politics, making them the most likely age group to say so. Meanwhile, baby boomers are the most likely to stay where they are, with 83% reporting they’ve never considered it.

By political affiliation, independents (18%) and Democrats (17%) are the most likely to consider moving. Republicans would rather stay within the country, though, as 78% of this group say they’ve never considered leaving the country due to politics.

What kind of an impact could that have on the U.S. housing market? According to LendingTree senior economist Jacob Channel, it has the potential to make a large dent in demand.

“There are about 258 million adults in the U.S., so if 15% of them decided to leave, that would mean 38.7 million people would no longer be around to buy homes or otherwise stimulate the economy,” Channel says. “This would have a profound impact on the housing market. We’d almost certainly end up with way more housing supply than demand, and home prices would probably plummet.”

Realistically speaking, many of the 38.7 million Americans who considered leaving won’t make the move, so Channel is skeptical of any potential impact on the housing market. But it’s worth sharing the could’ve, would’ve, should’ve.

Moving within the country may be more realistic

Some Americans may be dreaming of a life abroad, but a larger portion would feel content in another part of the country. Overall, nearly 2 in 5 (39%) Americans say they’ve moved or might consider moving to a new area if their political views didn’t align with the majority.

Once again, Gen Zers are the most likely to pack it up, with 55% saying they would at least consider moving to a different city or state. Baby boomers would still rather stay, as nearly 71% of this age group say they haven’t considered moving to a new area due to politics.

Most of those who’d move would likely cross state lines. Among those who say they’d move due to political views, 59% say state politics would impact their decision. Following that, 36% say local politics would play a role, while 30% would move within the country due to national politics. 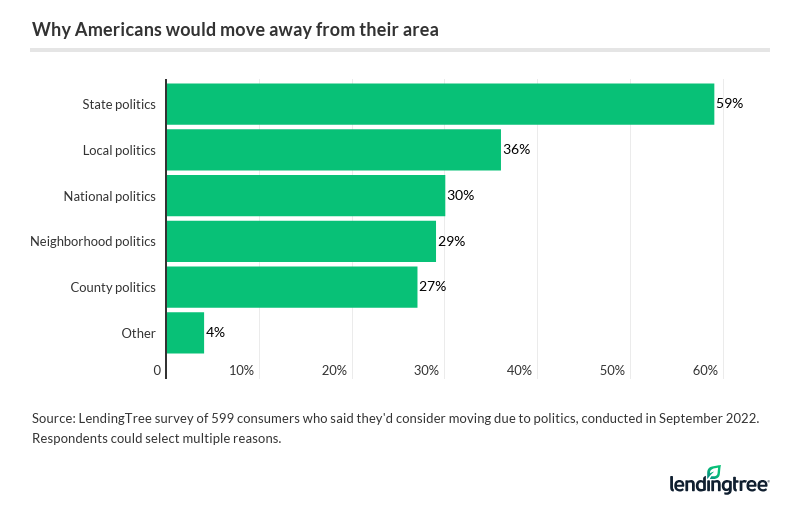 “If large numbers of people were to move from rural to urban areas or vice versa, it could overtax housing markets that see big influxes of new residents and push home prices up,” he says. “On the other hand, areas that lose current residents and don’t attract new ones could see prices decline as housing supply increases.”

Ultimately, Channel doesn’t believe politics alone will be enough of a reason to convince people to move. If anything, he says growing remote work options and rising home prices in major urban areas will probably have a more profound impact. Still, if people from urban areas continue to move to more rural ones, those areas could become more expensive and more left-leaning politically — though he says that’s a big “if.”

Meanwhile, 35% would move to a place with different political views — here’s why

While many Americans would skip town to be with like-minded peers, a similarly high percentage wouldn’t mind being the odd one out. In fact, 35% say they’ve moved — or would consider moving — to an area because their political beliefs differ from the majority.

Regardless of whether they’ve considered moving due to politics, 2 in 5 (40%) Americans say they’d move to a place where their political beliefs differed from the majority because they believe their vote would carry more weight.

It may feel like political signs, flags and other external displays of political views are more common than ever, but a large portion of consumers say they’re cautious about displaying their beliefs. Overall, 41% of respondents say they’ve worried about being ostracized or experiencing other versions of retaliation (such as vandalism or theft) for sharing their political opinions via external endorsements.

Some of those fears are well-founded — particularly for those looking to sell their home. If you’re a seller, Channel says your best bet is to make that home as appealing to the widest pool of buyers as possible. That means avoiding things like political signs.

“Political signs could absolutely harm a person’s ability to sell their home,” he says. “This is especially true as the housing market cools and buyers become more discerning about which homes they plan on making offers on. If a buyer’s politics don’t align with a seller’s and there are plenty of other houses to choose from, they may opt to find a seller whose views are closer to theirs.”

Looking to move due to politics? Here are a few things to consider about relocating

Like the holidays, the midterm season often brings some heated conversations. For those who feel like the political minority at the dinner table, moving may feel increasingly appealing. Although the political climate may feel particularly frustrating right now, Channel cautions against making any impulsive moves.

“Moving on a whim may seem like a good idea, but it often doesn’t pan out,” he says. “Remember that just because the grass seems greener on the other side of the fence doesn’t mean it is. If you move without proper consideration, you could end up filled with regret and out thousands of dollars.”

For homeowners looking to relocate, Channel offers the following advice:

LendingTree commissioned Qualtrics to conduct an online survey of 1,545 U.S. consumers ages 18 to 76 from Sept. 20 to 23, 2022. The survey was administered using a nonprobability-based sample, and quotas were used to ensure the sample base represented the overall population. All responses were reviewed by researchers for quality control.

71% of Americans Have Never Donated to a Political Campaign, and Most Won’t in 2022

The majority don’t plan to donate to a political campaign in 2022, according to the latest LendingTree survey.

LendingTree looked at how expensive down payments are across the nation’s 50 largest metros, finding the average to be $62,611.

READ MORE
Full-Time Minimum Wage Workers Can’t Afford to Own or Rent in Any U.S. State

Though there’s plenty to debate, the latest LendingTree research shows those earning minimum wage will likely struggle to find an affordable place to live.