42% of Buy Now, Pay Later Users Have Made a Late Payment

More than 4 in 10 Americans who’ve taken out a buy now, pay later loan have made a late payment on one of those loans, according to a new survey from LendingTree.

That’s just one of the surprising data points we found when we asked more than 1,500 consumers about these installment loans that have taken the country by storm in the past few years. We also found that many people have used buy now, pay later (BNPL) loans 10 or more times, have overspent with them and have even regretted using them.

The fact that 42% of BNPL users said they’d made a late payment was the most troubling and most shocking finding. In fact, we were so surprised by what we found that we re-fielded that and other related questions to make sure the high percentage wasn’t a fluke or an error. It wasn’t.

That figure is even more disturbing when you consider that BNPL loans are growing more popular by the day, and that nearly half of consumers would prefer them to credit cards. It means that a huge number of Americans are overextending themselves using these loans. In a time of skyrocketing inflation, rising interest rates and overall economic uncertainty, that’s a big deal.

In the last few years, buy now, pay later (BNPL) loans have become a staple of American retail. Once found only occasionally on retailers’ websites, BNPL is now an option seemingly everywhere. And whether they’re using the pay-in-four, interest-free flavor most typically associated with BNPL or the longer-term version, people are embracing these loans in droves.

Our survey found that more than 4 in 10 Americans (43%) said they’ve used a buy now, pay later service. Last year, that percentage was 31%. 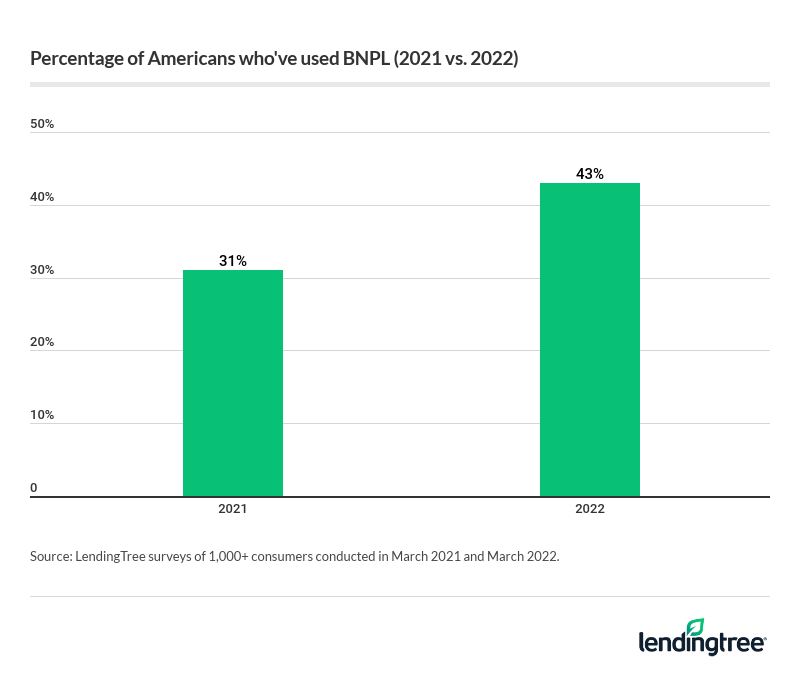 Women, Gen Zers (ages 18 to 25), parents with kids younger than 18 and those making $50,000 to $74,999 a year are the most likely to say they’ve used these loans. However, as the BNPL phenomenon has spread, all types of consumers have jumped in. 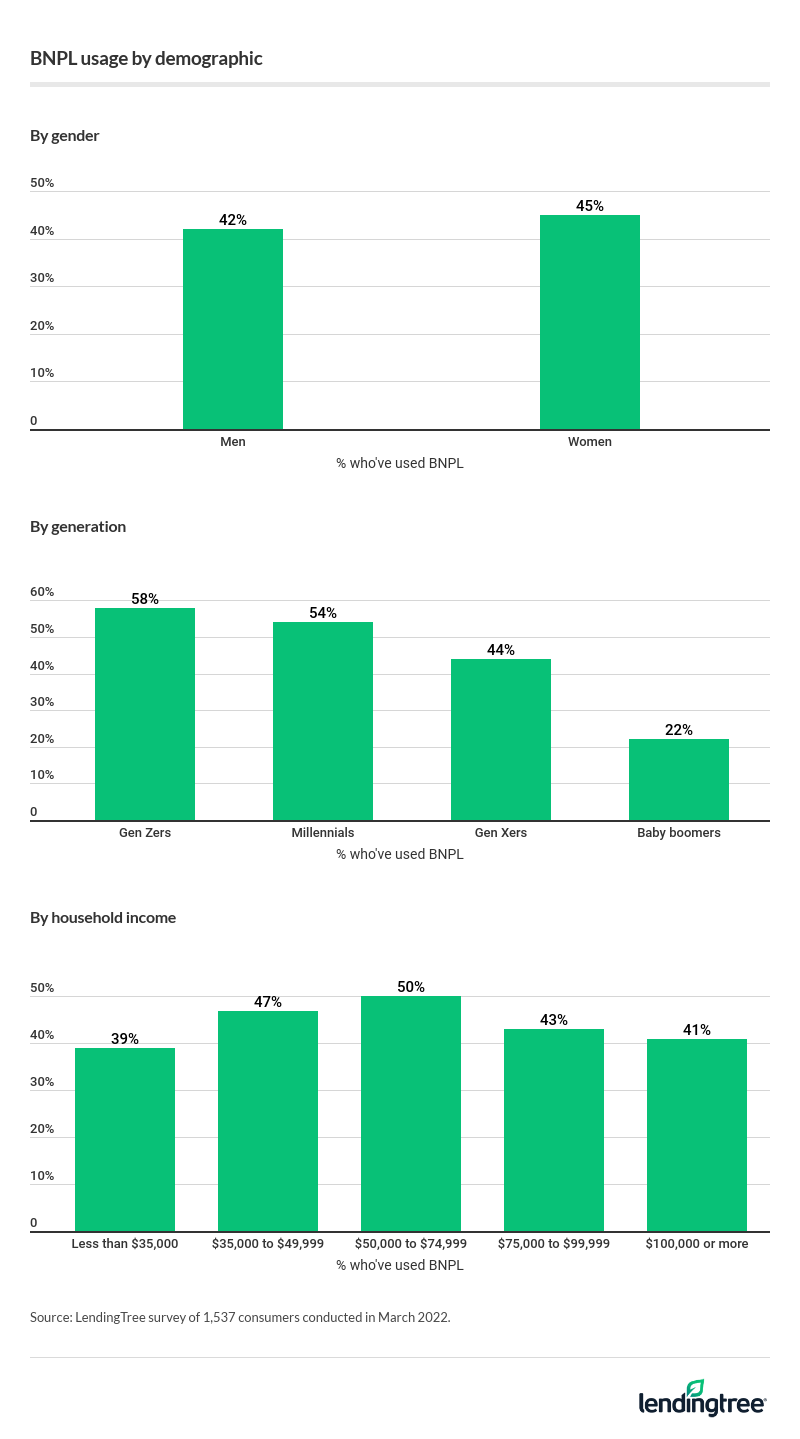 Some of the biggest growth has come from older Americans. Just 9% of baby boomers said last year that they had used a BNPL loan. This year, that percentage shot up to 22%.

We’ve also seen major growth among households with low income. About 4 in 10 people who make less than $35,000 a year said they’ve used a BNPL loan. Last year, that figure was just 19%.

Note that we didn’t include a breakdown by race in the chart above. That’s because the sample size by race in the survey was small, making it difficult to make any concrete judgments.However, in our monthly LendingTree BNPL Tracker, we’ve seen that people of color are consistently about 20 percentage points more likely than white Americans to at least consider using a BNPL loan in a given month and about twice as likely to say they’d definitely apply.

The sample size by race is small in those surveys as well. But given the consistency that we’ve seen in the data over the past four months in which we’ve done the BNPL Tracker, we felt comfortable reporting the information.

Among all respondents in the new survey, the most common thing to buy with a BNPL loan is clothing. Half of BNPL users (50%) said they’d bought clothing with one of these loans in the past, while 29% have bought shoes and 22% have bought accessories such as a purse or scarf.

Technology items such as laptops and gaming systems are also popular (33%), as are home décor items such as furniture and kitchen appliances (25%).

A gateway to overspending

Any type of loan can be a double-edged sword. On the one hand, the right loan — especially interest-free ones like a pay-in-four BNPL loan or a 0% interest credit card — can be a godsend for folks who just need a little bit of wiggle room to make a purchase or make an investment like remodeling their house or starting a small business.

On the other hand, loans can be dangerous by making it too easy to spend yourself into debt. And once you’re in that cycle of debt, it can be really hard to break away.

Our survey asked people if this statement describes them: “When using buy now, pay later services, I typically buy more than I would have if I had to pay for everything upfront.”The answer was a resounding yes. More than two-thirds of respondents (68%) said so. 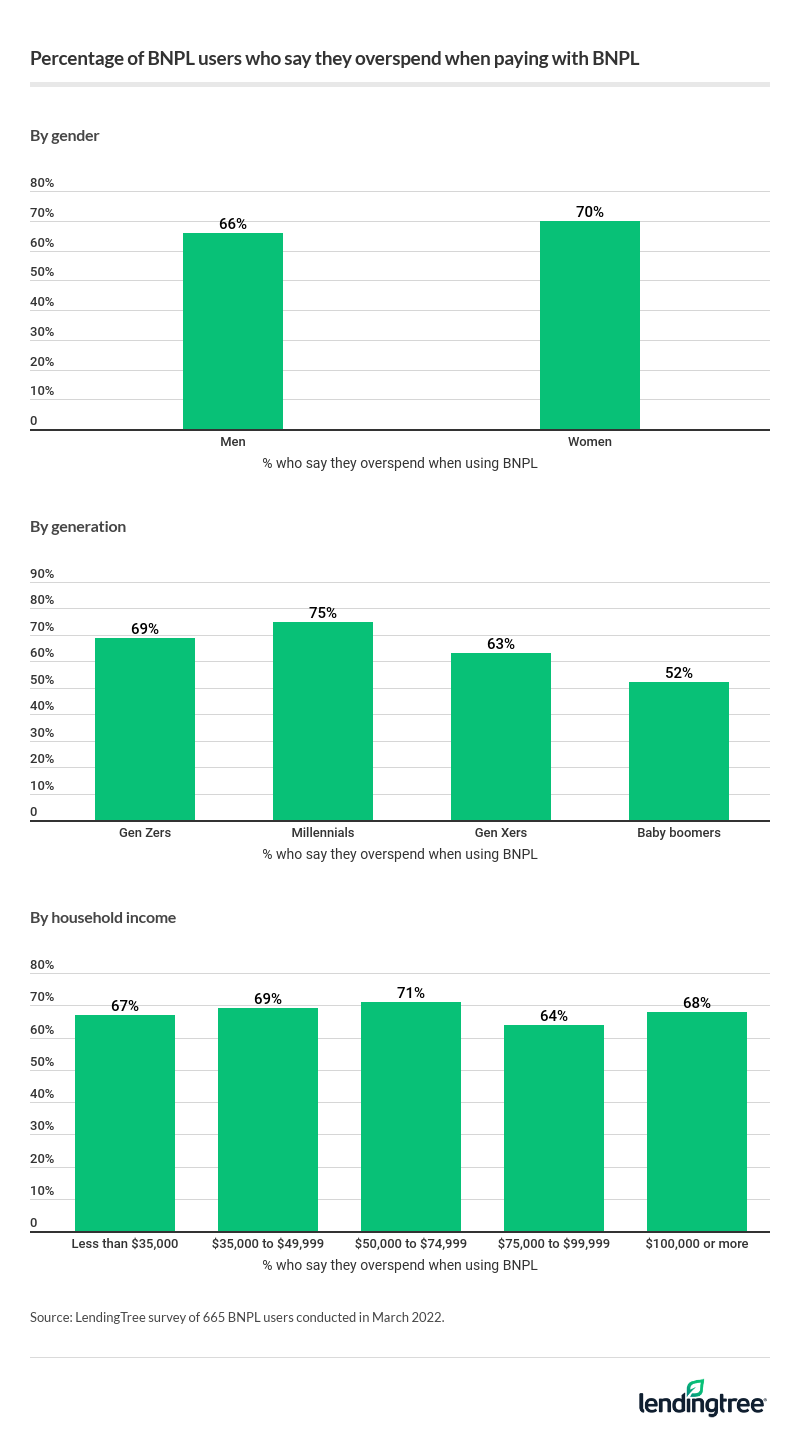 Again, to a degree, overspending is the point of these loans. Used wisely, they can be an effective way to extend a budget when money is tight. BNPL loans in particular can be great because they’re more easily available to folks with thin credit or bad credit and are cheaper than other options such as a retail credit card or a personal loan.

The trouble comes when that overspending gets out of control. With BNPL loans being so easy to get for so many people, it isn’t hard to go overboard with them and start to have some real problems. That’s exactly what’s happening for a disturbingly large group of people right now.

More than 4 in every 10 BNPL users (42%) said they’ve been late with a payment on a BNPL loan. That’s a huge percentage, especially when you consider that BNPL is a relatively new phenomenon and that — during their existence — delinquency levels have typically been at or near historic lows for many other types of loans. 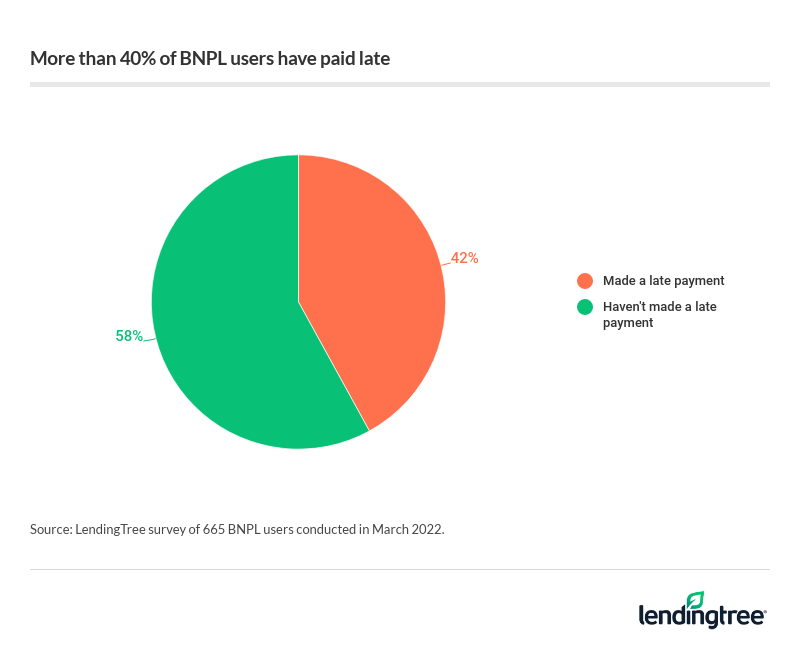 All types of consumers said they’ve paid late. Men and women were equally likely to say they’ve paid late, at 42%. Gen Zers were the most likely age group to say so at 55%, versus just 15% of baby boomers.

Given the high rate of late payments, it makes sense that many BNPL users would have buyer’s remorse. Nearly 1 in 4 BNPL users said they’ve regretted financing a purchase with one of those loans. Surprisingly, 31% of folks earning $100,000 or more a year said they’d regretted a BNPL purchase, higher than any other lower-income group.

Despite the regrets and late payments, buy now, pay later loans keep getting more popular. When we asked consumers — not just BNPL users — whether they’d rather use a BNPL loan or a credit card to pay for a purchase they don’t have money in the bank to cover, 53% chose credit cards and 47% chose BNPL.

A few years ago, it would’ve been unfathomable to think that more Americans would prefer buy now, pay later loans to credit. Now, given the rapid growth in BNPL, it wouldn’t be surprising if when we did this survey again a year from now, that’s precisely what we saw.

As buy now, pay later grows, four companies stand out: PayPal, Afterpay, Klarna and Affirm. We asked respondents whether they’d used any of seven BNPL firms, and those four were by far the most used. They’re the Mount Rushmore of buy now, pay later firms. 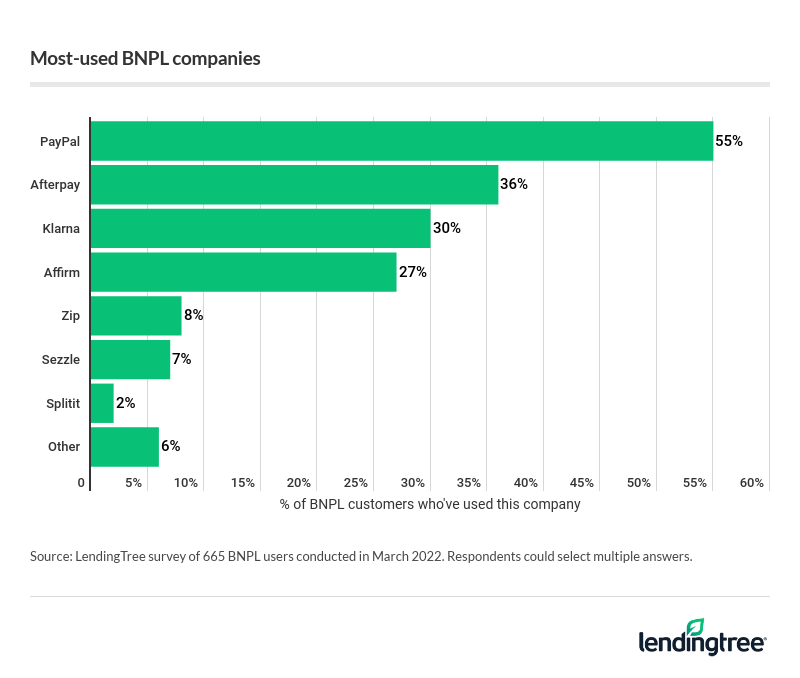 Among the four leaders, PayPal stands head and shoulders above the rest. More than half of BNPL users we surveyed (55%) said they had used PayPal. However, there is the possibility that our respondents might have used PayPal’s other services rather than just their BNPL service and still answered yes.

The other three companies are all known first and foremost for their buy now, pay later services. Among those, Afterpay (36%) was the most used, followed by Klarna (30%) and Affirm (27%).

Despite the relative newness of these brands, they’ve generated a great deal of loyalty.

When BNPL users were asked how they decide which BNPL provider to use when making a purchase, 47% said they’ll choose their retailer based on whether they work with the person’s BNPL provider of choice. For 53% of users, they simply use whichever BNPL provider the retailer has a relationship with.That’s a testament to the strength of these BNPL brands. Many online retailers will have relationships with specific BNPL providers, featuring them prominently on their online checkout pages as an option for customers alongside traditional options like credit cards.

However, some BNPL lenders also allow shoppers to use their services at many other retailers through the lenders’ app. That gives shoppers more options, and our survey clearly indicates that shoppers see that as a good thing.

The bottom line: What to know about BNPL loans

Buy now, pay later (BNPL) isn’t going anywhere. All the data shows that Americans love it. Sure, many regret using it sometimes and miss payments more often than they should, but they keep going back.

That’s totally understandable — the idea of a relatively-easy-to-get, interest-free loan with which you know exactly how much you have to pay and how long you have to pay it is definitely appealing. That’s especially true in a time of skyrocketing inflation, rising interest rates and general economic uncertainty.

All that said, there are key things that everyone needs to understand before applying for these loans, whether it’s your first or 21st time.

LendingTree commissioned Qualtrics to conduct an online survey of 1,537 consumers March 17-24, 2022. The survey was administered using a nonprobability-based sample, and quotas were used to ensure the sample base represented the overall population. All responses were reviewed by researchers for quality control.

42% of Buy Now, Pay Later Users Have Made a Late Payment

More than 4 in 10 who’ve taken out a buy now, pay later loan have made a late payment on one of those loans, according to a new LendingTree survey.