It’s no secret that the past year has been tough financially for millions of Americans. The cost of seemingly everything from gas and groceries to travel and furniture has soared higher in short order.

That has put an enormous strain on Americans’ budgets — and their emotional well-being. According to a new LendingTree survey of nearly 1,600 Americans, 4 in 10 adults — including more than half of millennials — say they’ve cried about money in the past year, with more than 90% of them having done so more than once.

Some tears were joyous as folks paid off debt or got new jobs. However, most were not happy tears, as inflation continued to take a toll on households throughout the U.S. Consumers don’t expect that to change anytime soon.

Women, millennials among those most likely to have cried about money in the past year

While millions of Americans have shed tears over their financial situation in the past year, some demographics are far more likely to do so.

For example, women are twice as likely as men to say they’ve cried over money in the past year — 52% versus 26%. While we’ve come to expect significant differences between the genders in surveys such as this one, it’s still eye-opening.

Some of the disparities are more predictable:

More than half of them (53%) were alone, while 40% were with someone supportive. Among those who cried in front of someone, 10% say they made up another reason for their tears.

These tears being shed are not often a one-time thing. Our survey shows that most people who cried over money did so multiple times, and a third have done so five or more times. 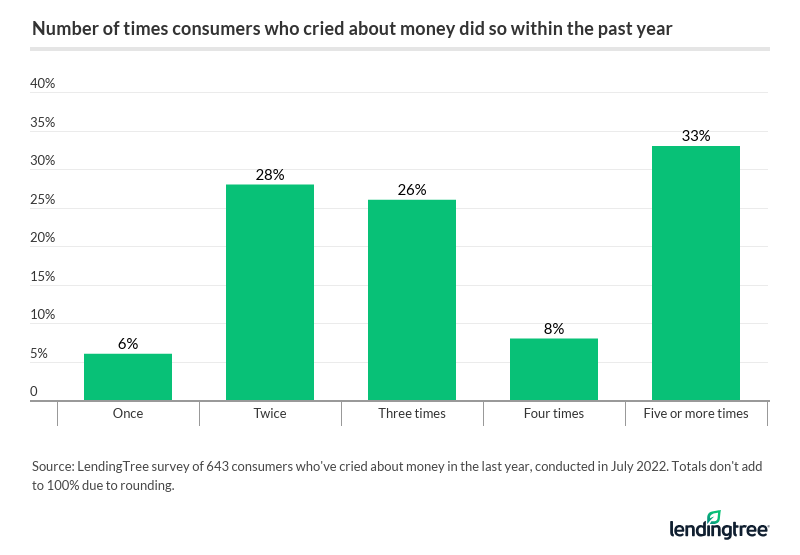 There’s usually not solely one reason why someone is struggling, whether financially or emotionally. As the old saying goes, everyone is likely fighting some battle you have no idea about. With that in mind, we asked people to choose the reasons behind their tears from a list of possible options.

The one thing that stood out most from the results was not happy tears. The most common answer was not being able to afford things their family wants or needs. Nearly half of those who cried over money (46%) say that was why they did so. 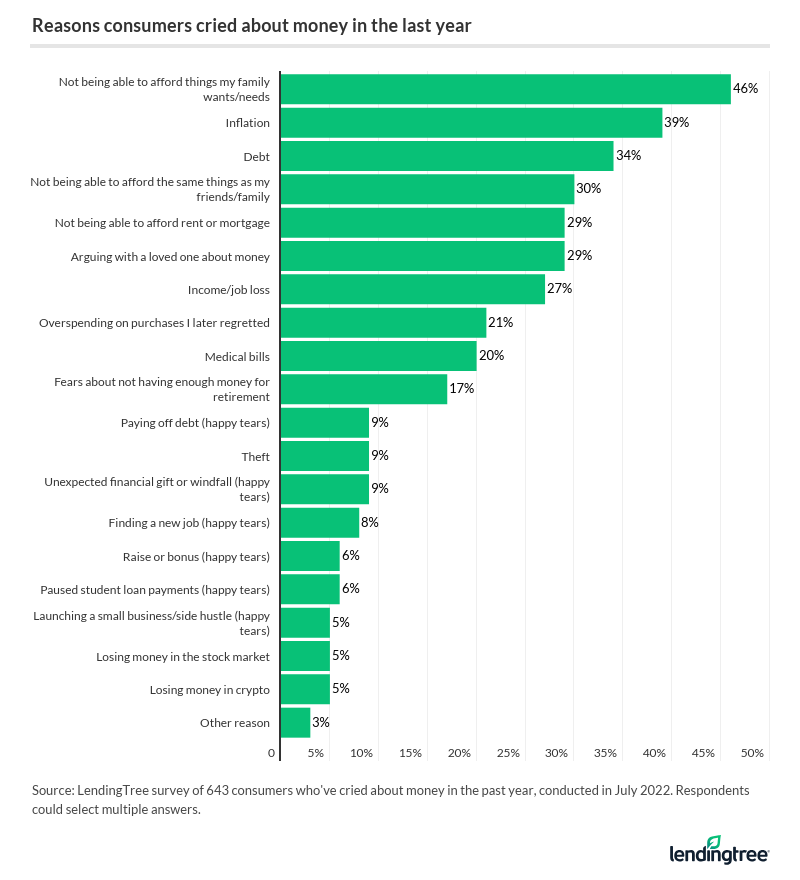 To no one’s surprise, inflation was a common choice. Nearly 4 in 10 (39%) who cried over money in the past year blamed inflation. About a third of those (34%) who cried cited debt as a cause for their tears.

About 1 in 10 of those who cried say they did so happily after paying off debt or receiving an unexpected financial gift or windfall (both at 9%) or finding a new job (8%). However, none of those “happy tears” moments were among the top 10 reasons for crying over money.

It’s a very simple, yet powerful reason, and it speaks to the insidiousness of inflation. Most Americans want to be able to provide for their family. That gets much harder when the most fundamental costs of life — gas, groceries, cars — get pricier. When you can no longer easily afford the most basic of bills, it’s easy to feel like things are out of your control, and that’s often when the tears start to flow.

Many expect to cry in the next 6 months, too

As hard as the past year has been for many Americans, some expect the tears to keep coming. A third of consumers (33%) say they’re likely to cry about money in the next six months. 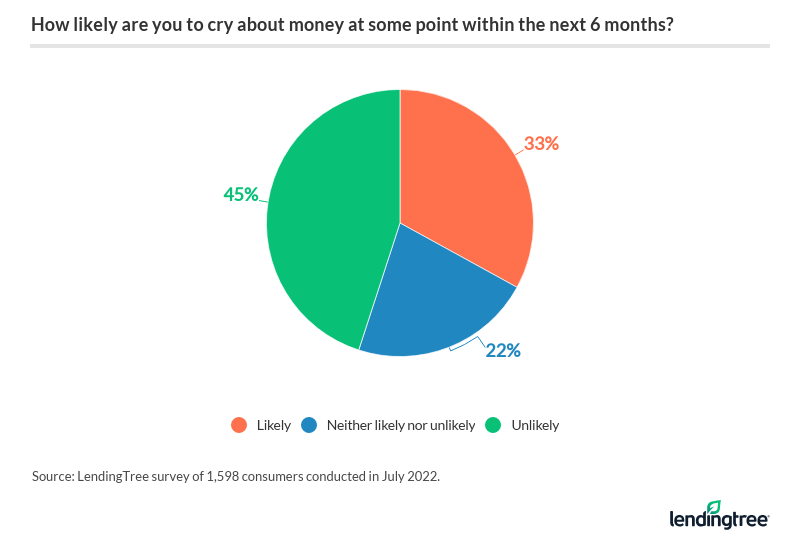 Again, women are far more likely than men to say so — 41% versus 24%. Millennials are more likely than other age groups, though only narrowly, with 41% saying they expect to cry again soon, versus 39% of Gen Zers and 37% of Gen Xers. (Just 15% of baby boomers say so.)

People are rarely more emotional than when things feel out of their control. That feeling of powerlessness can be devastating and debilitating and lead to a tidal wave of tears.

When you feel helpless and overwhelmed, one of the best options is to take steps, even small ones, to try to regain control. Perhaps the best news is that many people are doing just that. 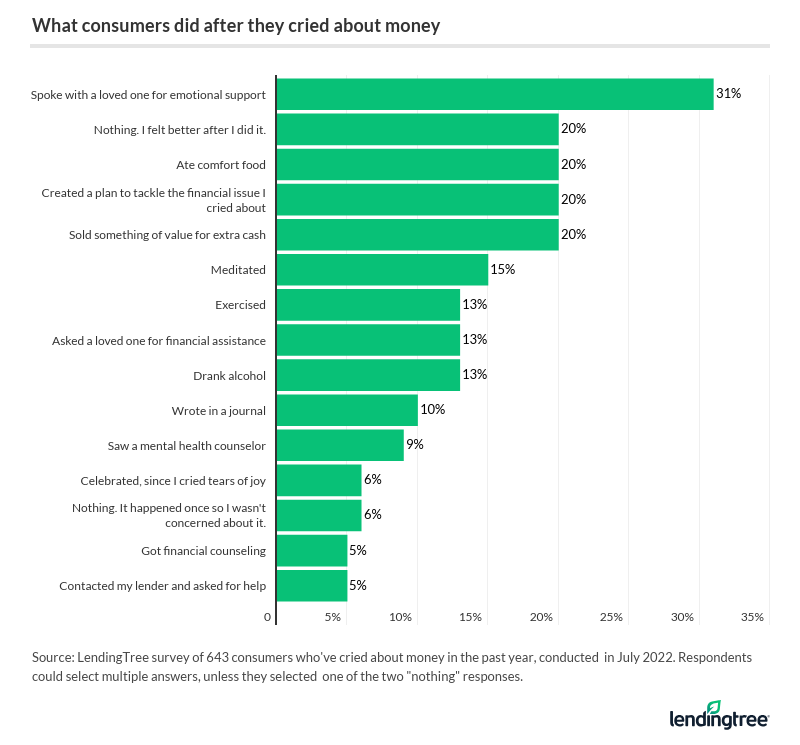 We asked respondents what they did after they cried about money, providing more than a dozen possible choices and letting them pick multiple answers. The option selected most was speaking with a loved one for emotional support — about a third (31%) of those who had cried chose that. Another 20% say they did nothing after they cried, with the tears having made them feel better. The other most popular answers typically involved action.

Some took steps to help their financial situation, while others focused on bettering their mental or physical health. Others found solace in comfort food or alcohol. And, yes, some celebrated because their tears were joyful, though that wasn’t the case for most.

You should consider healthy, positive steps to take greater control and feel more empowered. Many of the choices in the above chart are suitable places to start, including:

Another great option could be to refinance and consolidate your debt using a 0% balance transfer credit card or a low-interest personal loan. Those could save you money and shorten your to-do list by reducing the number of accounts you have to manage.

The key is to get started. The first steps may seem small and insignificant, but they can start the ball rolling. When it does, real change can come, which might help keep some tears at bay.

LendingTree commissioned Qualtrics to conduct an online survey of 1,598 U.S. consumers ages 18 to 76 from July 8 to 15, 2022. The survey was administered using a nonprobability-based sample, and quotas were used to ensure the sample base represented the overall population. All responses were reviewed by researchers for quality control.

42% of Americans Cried About Money During the Pandemic; Income Loss Most Common Reason

Our survey found more than 4 in 10 Americans cried over their financial situation during the COVID-19 outbreak. Here’s a breakdown of the emotional toll.

READ MORE
About 7 in 10 Americans Have Cried About Money: Survey

According to a survey by LendingTree, nearly 70% of Americans admit to becoming emotional over their finances.

READ MORE
Is a Debt-Free Lifestyle Possible for You?

Depending on your financial situation, a debt-free lifestyle may not be a goal that’s easily attainable. Here’s what it takes to make it work.