Mixing money with your personal relationships can get tricky. A recent LendingTree survey of over 1,000 Americans found that almost a third of respondents reported negative consequences from lending or borrowing money from family and friends.

Click below for a closer look at our findings:

When it comes to seeking and giving financial help, most people feel more comfortable doing so with a family member versus a friend — in fact, a quarter of survey respondents said they would not give their friend a loan, while only 17% said the same for family members. This may seem harsh, but the sentiment goes both ways. Similarly, respondents were less likely to ask friends for help when they need to borrow money than they were with a family member.

Lending money to others seems easier for most respondents to stomach than borrowing it. Overall, more than half of respondents have not borrowed money from a friend or family member in the past five years — but more than half have lent money. 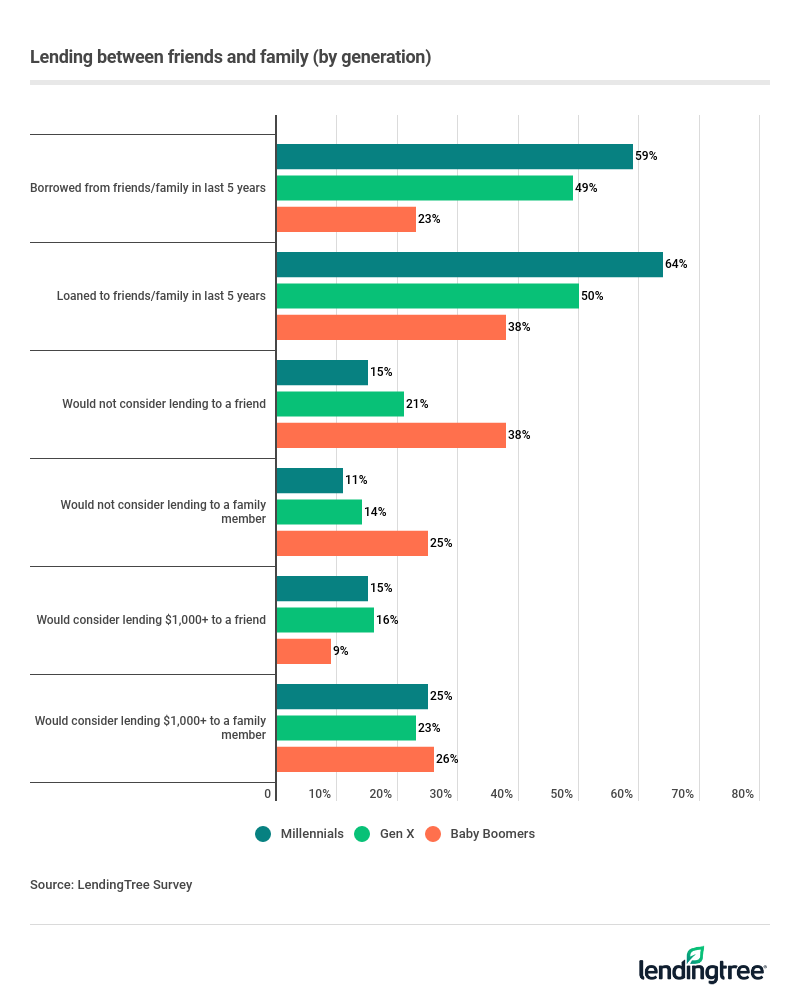 Millennials take a more lax approach to loans amongst loved ones, as they were the most likely to both lend and borrow money. Millennials are likely more sympathetic due to dealing with their own financial hurdles. From 2016 to 2019, millennials saw the greatest spike in overall debt amounts among each generation. During that three-year period, their total debt balances rose by an average of $16,714, at an almost 29% growth rate, during that time period.

Baby boomers have lent out money less frequently than millennials and Gen Xers in the past five years. This may, in part, be due to the fact that baby boomers are at or close to retirement age, and thus living on limited incomes.

Why Americans are borrowing and lending money to others

Needing to borrow money from a loved one is usually not something you expect to happen. But sometimes, it may be the most practical and affordable option for borrowing money. The following are just some of the reasons why Americans are lending or borrowing money:

Monthly housing costs and auto expenses were found to be the two primary reasons given for why people borrow money. Auto loans make up the second-biggest share of non-mortgage debt for millennials, although anyone from any generation can struggle to pay their monthly auto loan payment. Sixteen percent of Americans reported they’ve lent money to help cover the costs of of auto expenses. 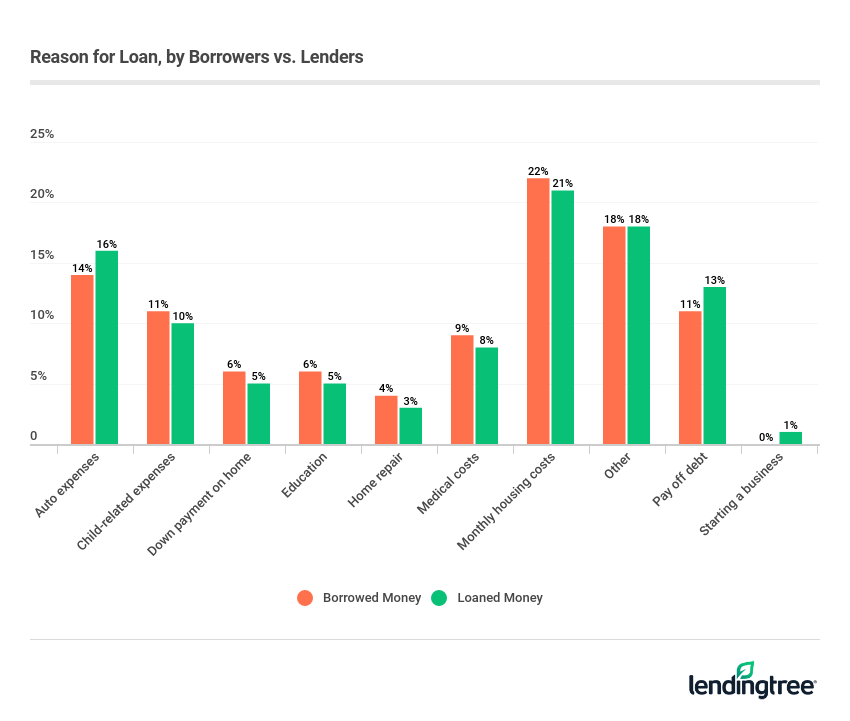 While there is overlap among generations in each of these categories, some struggle more than others with specific costs. For example, it’s worth noting that student loans make up the majority of millennial debt, with auto loans falling close behind. So it makes sense that 7% of millennials reported that they borrowed or lent money for education expenses. And 16% of millennials did so to cover auto expenses.

Baby boomers, in contrast, generally have less mortgage debt and less of a need for expenses relating to caring for a child. Only 7% of baby boomers reported partaking in a loan with a friend or family member to assist with child-related expenses, compared to 15% of millennials.

If a time comes where you need to borrow money from a friend or family member, or are going to lend money, then you’ll want to proceed with caution and consider the following tips. Doing so can help you avoid feelings of resentment, decreased contact, verbal arguments, uncomfortable family gatherings, irreparable harm to relationships, and hurt feelings, all of which Americans reported as negative outcomes of borrowing or lending money.

LendingTree commissioned Qualtrics to conduct an online survey of 1,022 Americans — 620 of whom borrowed and/or loaned money to a friend or family member within the last five years.

For the purposes of this survey, generations are defined as:

You may feel generous lending money to a friend or family member, but it could create conflict and result in hurt feelings, a LendingTree survey reveals.