How Much Does a Tesla Cost & How to Pay For It

Andy is a freelance writer with almost a decade covering personal finance, credit cards and travel. He has been published in numerous outlets including LendingTree, Creditcards.com and Go Banking Rates.

Ever since the Tesla Roadster debuted in 2008, the Fremont, Calif.-based electric automaker has been shaking up the auto industry in massive ways. The Roadster was followed by Models S and X and, most recently, the more affordable Model 3.

Tesla is immensely popular with auto enthusiasts and is beloved by its customers as well, recently earning the top spot in the 2017 Consumer Reports Annual Owner Satisfaction Survey, which surveyed people who have owned their vehicles for at least three years.

In 2018, the company says it is on track to produce half a million vehicles. Net preorders for the new and affordable mass-market Tesla Model 3 reached 455,000 in August 2017, and, according to the company’s fourth quarter report, sales remained steady through the end of the year.

If anything, people can’t get their hands on the new model fast enough. The popularity of the new Model 3 has also driven the sales for existing Models S and X up in showrooms where Model 3 is on display, and the company has struggled to meet the demand with enough supply of new vehicles.

As it stands, you’ll pay dearly to get a Tesla car in your driveway. The cars range in price from starting at $35,000 to over $80,700 — and that’s just the base price of its three flagship sedans.

In this guide, we’ll explain exactly how much it costs to purchase a Tesla. 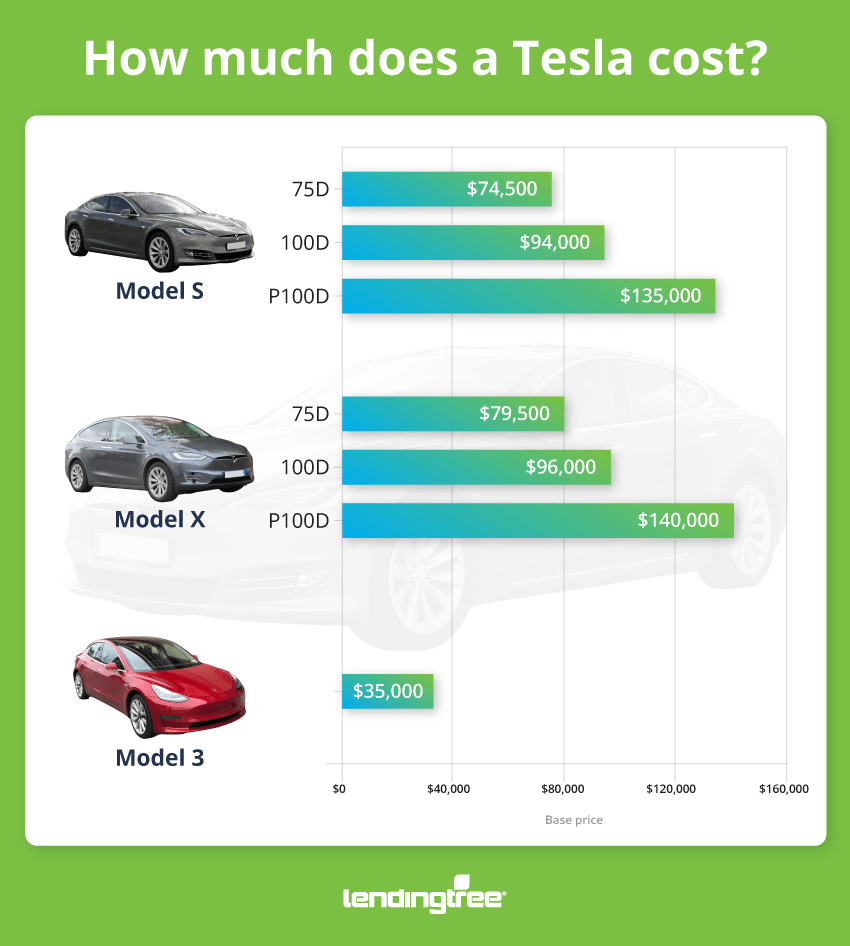 How much does a Model S cost?

With a Tesla, what you’re really paying for a seriously powerful battery.

In the 2018 lineup for its Model S, its flagship Sedan, Tesla has three models available, each of which are named after the type of battery power that they pack: 75D, 100D, and P100D.

Here’s how to decode the model numbers: The number indicates the nominal battery capacity, or kilowattage, which is an indication of how much battery life the car can sustain.

The letter “D” indicates a dual motor and “P” indicates the “Performance” option, which packs even more power to drive acceleration.

For example, the P100D model means you’re getting a Performance version with a dual motor and 100 kWh battery that, according to Tesla, “pairs a high performance rear motor with a high efficiency front motor to achieve Ludicrous acceleration, from zero to 60 miles per hour in 2.5 seconds.” It can also sustain battery life for up to 315 miles.

Here’s an example of prices for three versions of Tesla’s Model S:

How much does a Model X cost?

While the Model S is a sports sedan, the Model X is a crossover SUV, which might explain why it carries a slightly steeper price tag across all three models.

It carries a few extra bells and whistles, such as its Instagram-worthy “Falcon wing” rear doors.

Aesthetics. And of course, there are those amazing Model X falcon wing rear doors. The doors can fold up and down, which, aside from the aesthetics, can make entering and exiting the vehicle very easy. However, the falcon wing doors design renders the Model X incompatible with installing the roof rack.

Price. The Model S vehicles are $2,000 to $5,000 cheaper than their corresponding Model X cousins.

Best for: Since the Model X is bigger, it would typically be more appealing to a car buyer with a larger family and one who simply prefers an SUV to a sedan (hatchback), while a consumer who likes her car sportier and slicker would prefer the Model S.

With a base model priced at a relatively low starting at $35,000, the Model 3 is Tesla’s long-anticipated offering for the mass market.

The $35,000 version of the Model 3 won’t be available for preorder until late 2018. Car buyers who want a base option for $35,000 won’t just have to just deal with a longer wait — they’ll also be making do with a less powerful battery. It comes with a standard battery and 220-mile range.

In the meantime, consumers will have to make due with the existing Model 3 version, which is  priced at $49,000. This model is outfitted with a long-range battery and a series of premium upgrades and comes with a 310-mile range.

Although they are both sedans, there are considerable differences between the Model 3 and Model S. The Model 3 is smaller, so car owners who prefer a slick look will find Model 3 even slicker than Model S.

The $35,000 Model 3 also has a more limited range. Owners will also have to pay each time they stop by a Tesla charging station to supercharge their battery. In contrast, the Model S comes with a free unlimited supercharging allowance and a longer range.

On the plus side, the Model 3 doesn’t compromise on safety and, like other Tesla models, has an autopilot feature.

Weaker battery life aside, the most disappointing factor for car buyers who have been eagerly awaiting the arrival of the Model 3 is actually the delivery time. Those who place their orders today will have to wait 12 to 18 months to get behind the wheel.

Tesla standard features are already impressive with its smart air suspension, front and rear trunks, heated front seats, and 400 kWh of free annual Supercharge credits. However, it’s Tesla’s premium features that have created tens of thousands of Tesla devotees and grabbed the headlines in major media around the world.

The foremost of these is its self-driving, or autopilot, capability.

Autopilot doesn’t come free or cheap. First, a Tesla owner needs an upgrade to Enhanced Autopilot that will keep the vehicle in the lane, change lanes, move to another highway, and even self-park. The cost is $5,000 ($6,000 if ordered after delivery).

The next upgrade to full self-driving capability costs $3,000 and adds the ability to complete short and long-distance rides with no participation from the driver ($4,000 if ordered after delivery).

Other upgrade options include:

Notable premium upgrades (no official pricing has been released yet):

What are the tax incentives to own a Tesla?

For car buyers who can take the full advantage of the federal income tax credit, this is what the new Tesla vehicle will cost (not including the Destination and Doc fee and before any state incentives).

California: $2,500 rebate (based on income eligibility)

Oregon: $750 rebate on wall connectors and installation (more for commercial use)

How to pay for your Tesla

Of course, getting financing through Tesla directly is not the only financing option. A local bank or credit union can offer a better financing deal, so it never hurts to ask. Shop around for an auto loan and secure your own financing before you even enter the dealership.

If you have a great deal from another lender, Tesla’s financing department might be able to beat that offer. Either way, you will walk away knowing you got the best deal possible.

A car buyer can finance a Tesla vehicle just like any other car. If one wants to get a car loan from Tesla, its website offers a very convenient calculator. For example, financing a Model S 75D car for five years in New York yields the following result.

The price already includes an up-to-$7,500 federal tax credit, but don’t include taxes and registration fees, which are extra. Also not included is a $395 disposition fee that is due at the end of the lease. Tesla leasing is not available in all states.