The face of U.S. employment is changing. While some experts look ahead and wonder what robots and automation will mean for various markets, others point to a different trend as the average age of employees continues to rise.
Millennials may make up the largest sector of the working force in America, but by 2024, the median age of U.S. workers will climb to over 42 years old.
As more baby boomers put off retirement and millennials continue to enter the workforce at an astounding rate, relationships between employees will also change. We surveyed over 1,000 Americans to get their opinions on both older and younger colleagues – including their work ethic, willingness to learn, and creative capacities – by ranking them on a scale of 1 to 7, with 1 least exhibiting the quality and 7 most exhibiting the quality. Continue reading to see how people from various industries feel about working with one another today.

Gen Xers are seen as the most valuable employees, according to their co-workers – they scored an overall average of 5.6, compared to 5.4 for baby boomers and 5.2 for millennials
Millennials were rated the most skilled with technology – averaging a score of 6.2, the highest score for any quality we measured
The industry Gen Xers are most valued in (manufacturing) is also disappearing
Baby boomers were found to be the least skilled with technology, averaging an overall score of 4.0
Millennials were found to be the most creative generation, averaging an overall score of 5.4, compared to 5.1 for Gen Xers and 4.7 for baby boomers
Baby boomers, on average, rated themselves the most intelligent of any generation – giving themselves a score of 6.5 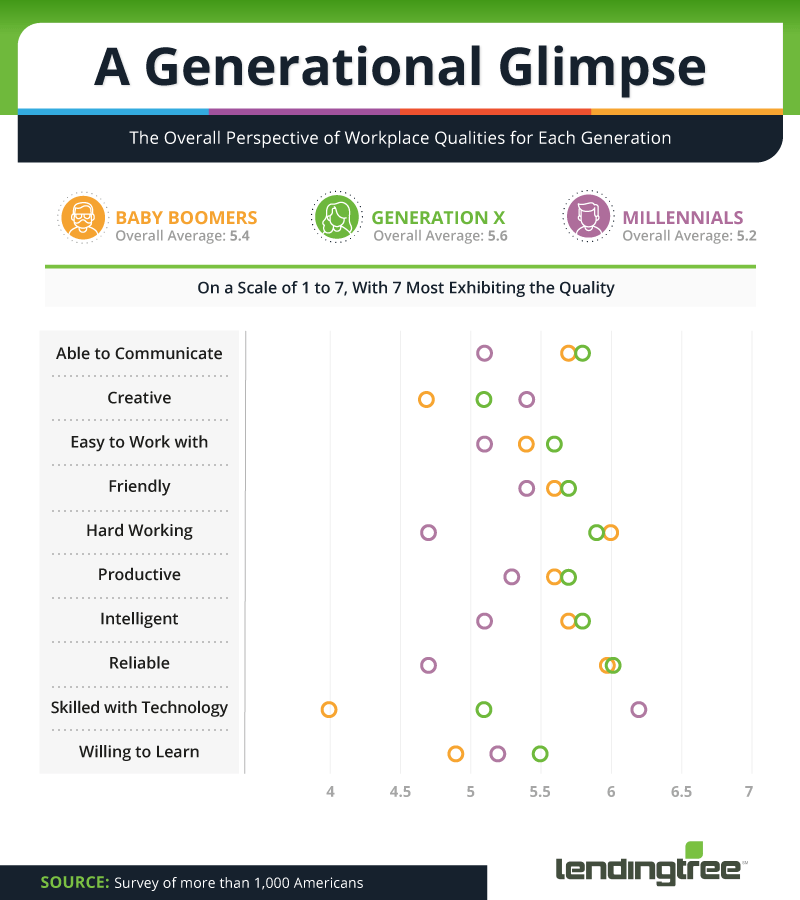 So what are the greatest workplace strengths (and weaknesses) of each generation today?
Workplace analysts have been attempting to build better arguments as to how and why America’s oldest and youngest employees might best benefit business. In reality, it could be Gen Xers who have the most to offer, according to their co-workers. When asked to rate each generation on various workplace skills and attributes, Americans rated Gen X co-workers the highest overall.
Millennials, who earned high marks for their skills with technology, also earned the lowest rating overall, according to our survey. Considered the least reliable, least hardworking, least productive and least intelligent, millennials ranked last in 7 of the 10 traits. In contrast, while baby boomers were rated the lowest (an average of 4.0) for their ability to use technology, their strengths just happened to be millennials’ weaknesses: they were deemed both hardworking and reliable.
Perhaps as an indicator of their greatest strength, Gen Xers earned the highest rating for their reliability. While no other skills stood out significantly when compared to baby boomers or millennials, Gen Xers didn’t score less than an average of 5.1 for any surveyed quality.

Your own best critic 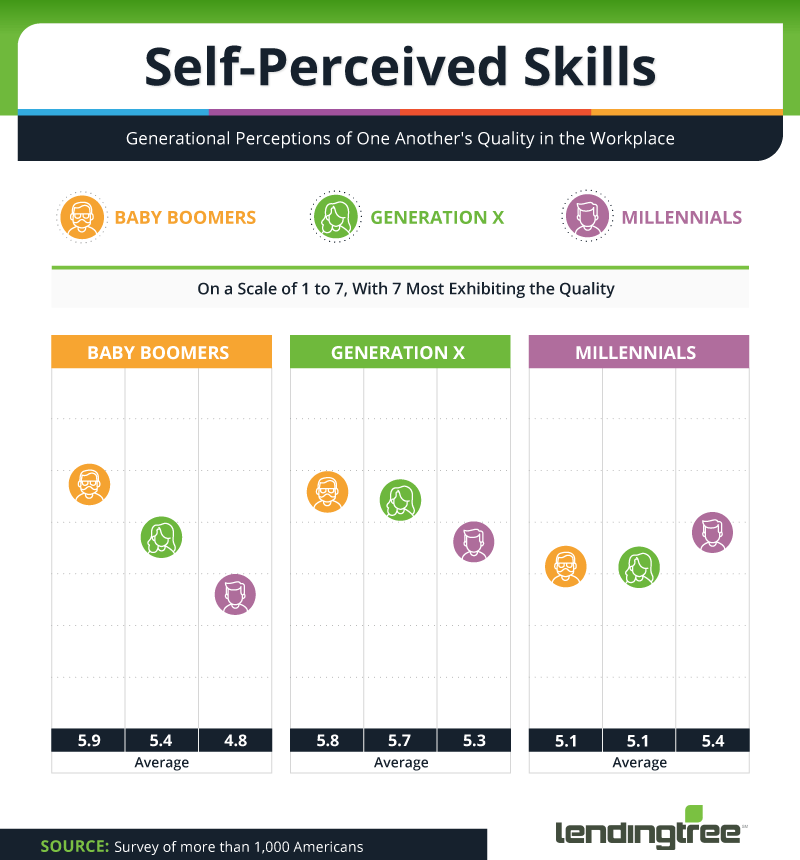 When it came to how each generation saw themselves, baby boomers and millennials were their own greatest champions, while Gen Xers may have undersold themselves and their skills.
Research has shown that older generations in the workforce may be more successful –and baby boomers we polled agreed. Ranking themselves with the highest overall score, jobs who employ older generations of workers also generate more loyalty from their employees and help reduce turnover. Still, experts suggest a certain level of accommodation may be necessary to take full advantage of the aging workforce, including later shift times to allow for better sleep regulation and more time off.
While each generation scored themselves the highest for their overall contributions, millennials we polled may not have been numb to the criticisms of their generation. Millennials rated their value in the workplace at just a 5.4 according to our scale, compared to the 5.7 Gen X Americans rated themselves and the 5.9 from baby boomers. Gen Xers were the only group to have another generation rate their workplace contribution the highest: Baby boomers perceived Gen Xers as more beneficial around the office than even Gen Xers rated themselves. The generation gap. 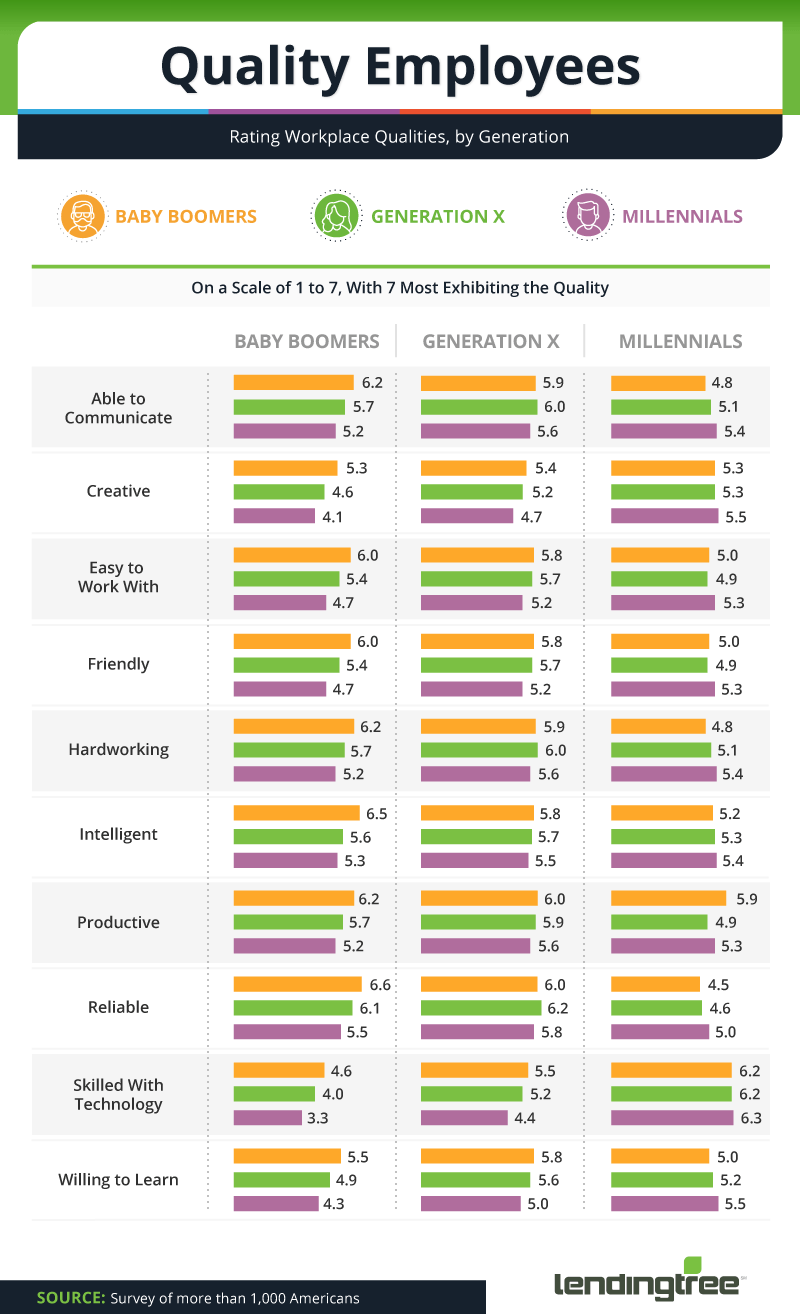 When it comes to how the generations see each other in the workforce, perhaps no tension is as well-documented as that between millennials and baby boomers. Older Americans rated millennials the lowest for each quality, while millennials nearly echoed the sentiment for baby boomers. Despite their differences, our survey found the skills older and younger Americans saw in themselves (and occasionally in each other) could be a better match than they realize.
When asked about aptitude with technology, nearly everyone agreed it was millennials who had the leg up. While the advantages of their tech-savvy nature can be far-reaching, that proclivity toward tech can also create a certain level of dependency. Experts suggest a reliance on technology has made it difficult for millennials to communicate effectively in a face-to-face environment, a skill baby boomers and Gen Xers may be more adept at.
Each generation also had different opinions on which of them was the most creative. While millennials gave the edge to themselves, baby boomers earned the highest average score overall. Experts suggest creativity may be one of the most important elements of a successful business – even if what constitutes as creativity is often misinterpreted. Like diversity, celebrating creativity in the workplace could be one of the most important keys to cultivating better innovation and communication between peers. Satisfying skill sets.

Baby boomers and Gen Xers were typically considered more successful in relation to retail jobs compared to millennials, in addition to medical and health care. In contrast, despite being rated the lowest by other generations, millennials came out on top for education, finance and insurance jobs, as well as arts and entertainment positions. 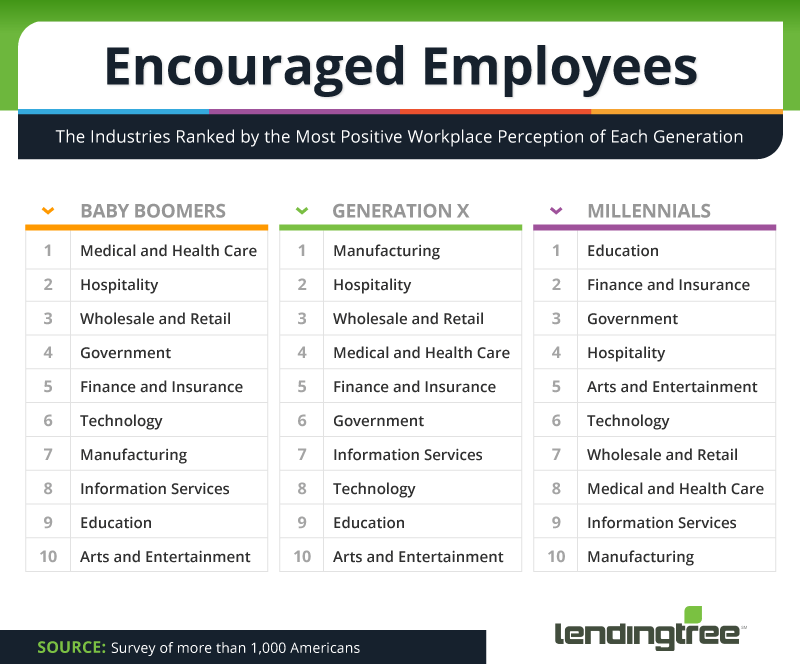 When asked about professional characteristics, including communication skills, creativity, and friendliness, millennials and baby boomers rated lower in the industry Gen Xers dominated: manufacturing. Seen as the most creative, productive, and reliable when working in manufacturing positions, millennials earned their lowest scores in these same categories. While manufacturing output in the U.S. has been on the rise in recent years, more than 5 million manufacturing jobs disappeared between 1987 and 2017.
While baby boomers earned the highest scores according to Americans in the health care industry, millennials ranked highest by those in education rather than in technology. Unlike the decline of manufacturing jobs, the decline in educational opportunities may be by choice. As a result of lower pay and less stability, fewer young Americans are willing to take the plunge, despite their potential skill as educators and the impact technology could have on the field.

When it comes to the future of the workplace in America, things are definitely on the move. Despite preconceived notions about the jobs certain generations may be best suited for, older Americans might be better at working in technology than millennials, and the jobs some generations are great at now could disappear forever.

We surveyed more than 1,000 Americans in August 2017 on their perceptions of co-workers at different ages. The survey was weighted for age to the U.S. Census Bureau’s 2016 American Community Survey.