75% of Parents Stressed About Paying for Back-to-School Shopping, Up 12% From Last Year

The back-to-school season may happen every year, but that doesn’t mean attitudes toward it will remain the same — especially amid a years-long pandemic.

The latest LendingTree survey of more than 2,000 U.S. consumers finds that 36% of Americans are shopping for the back-to-school season, whether for themselves, their child or someone else. Researchers tracked spending and sentiments among all back-to-school shoppers, while also taking a closer look at parents with kids younger than 18.

One key finding: The financial stress of back-to-school shopping is rising, and many shoppers expect to take on debt. Here’s what else researchers found.

Overall, 72% of back-to-school shoppers say they’re stressed about paying for it. But some groups are more stressed than others. For example, women (77%) are significantly more likely to be stressed than men (67%). Plus, stress rises to 80% among shoppers earning less than $35,000 and remains at 70% or above for every income bracket besides $100,000 or more.

Parental status can also have an impact on stress. In fact, 75% of shoppers with children younger than 18 are stressed about paying for back-to-school items. This is an increase from 67% in last year’s survey and the highest percentage in the four years LendingTree has conducted this research. 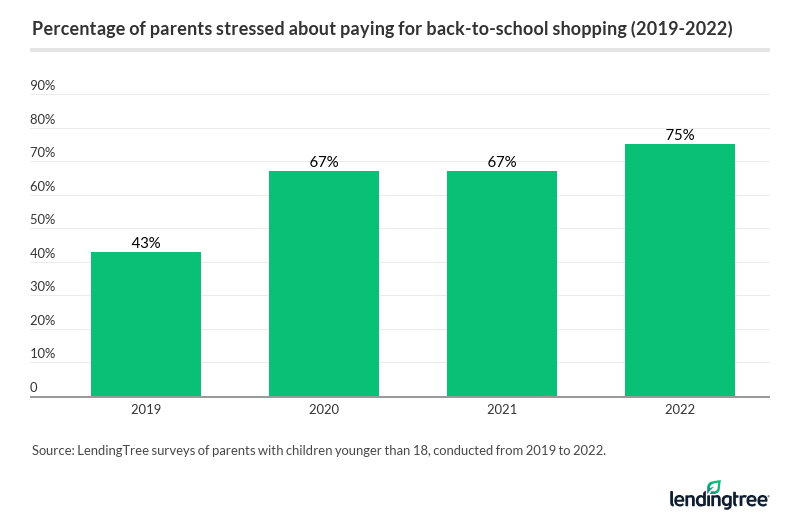 “Back-to-school shopping is stressful even in the best economic times,” says Matt Schulz, LendingTree chief credit analyst. “With inflation running rampant and supply chain issues lingering, these are definitely not the best of times. Lots of families are going to have to make some real sacrifices and have some uncomfortable conversations this back-to-school shopping season.”

About a third of shoppers are getting a head start this year for two main reasons: product shortages and high costs.

“The further ahead you can prepare, the less stressful the process can be,” Schulz says. “That means starting to save earlier, making your shopping lists earlier and even hitting the stores earlier. It may not be easy to do, but it can make a difference.”

This early-bird mentality can be financially helpful, but it may also be something of a necessity. And of those who’ve already started back-to-school shopping, 44% have faced difficulty obtaining the items on their lists due to shortages or supply chain issues. 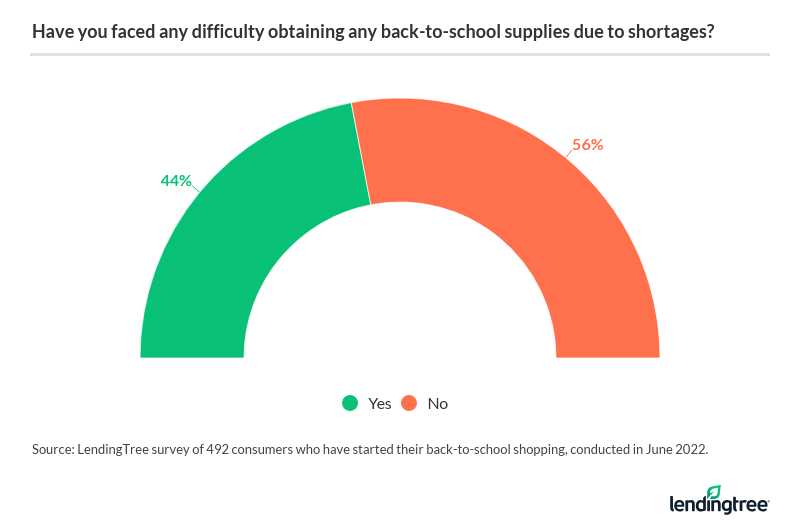 Just 13% of shoppers had already finished when this survey was conducted in early June — most common among six-figure earners (21%) and men (21%).

“The truth is that back-to-school shopping can be really expensive,” Schulz says. “Millions of Americans simply can’t do it without taking on some debt. That’s true in good economic times, and it is certainly true in times like ours where prices are rising seemingly on a daily basis.”

One reason for these big back-to-school bills could be that parents aren’t just shopping for their children. More than half (53%) of parents with kids younger than 18 say they’re required to purchase items for their child’s classroom. And 30% plan to buy classroom supplies even though they’re not required. 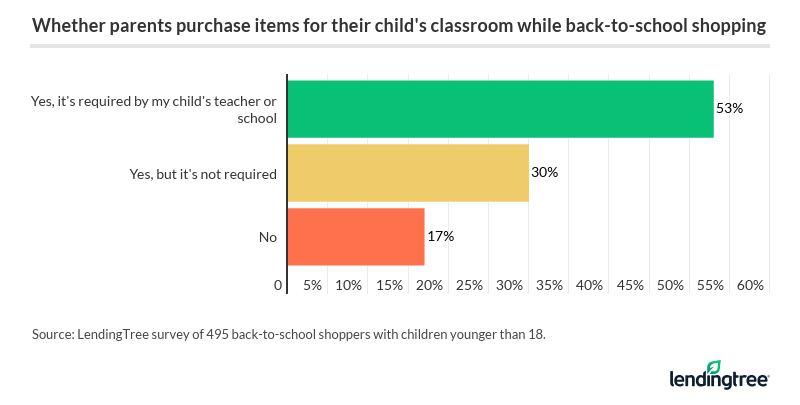 Overall, 28% of back-to-shoppers say they can’t afford some of the school supplies on their list this year. That percentage rises to 31% among shoppers with young children.

Another area the survey examined was how shoppers are spending their back-to-school budgets. Clothing is the No. 1 item on shoppers’ lists, even surpassing school supplies, which came in second. There’s also been a shift away from face masks and hand sanitizer, despite the ongoing pandemic. Among shoppers with kids younger than 18, 40% will purchase hand sanitizer (down from 62% last year) and 26% will buy face masks (down from 56%).

This move away from pandemic-era trends among this group also proves true with how people shop. While back-to-school shoppers with young kids primarily shopped online in 2020, it’s increasingly shifted back in-store over the past two years. In fact, the majority of parents — 51% — will equally divide their shopping between online and in-store this year, while 32% will mainly shop in-store. Only 17% will primarily shop online, which is a significant departure from 44% in 2020. 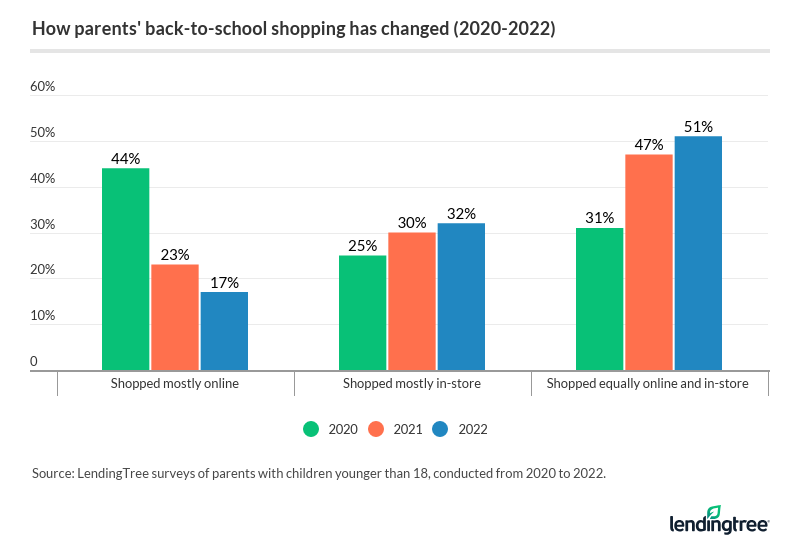 “I actually think this is a welcome sign,” Schulz says. “It is a sign of things continuing to return to normal after years of having our lives flipped upside down. Online shopping is obviously here to stay, but in-store shopping clearly is, too. That is good news for cost-conscious consumers.”

By shopping both online and in-store, especially by hitting the clearance racks, shoppers may be able to find better deals, he adds.

Shoppers aim to keep spending down

Although 17% of back-to-school shoppers aren’t planning to change how they shop this year, most are. And some of the more popular options include searching for sales, cutting out unnecessary items and shopping secondhand. 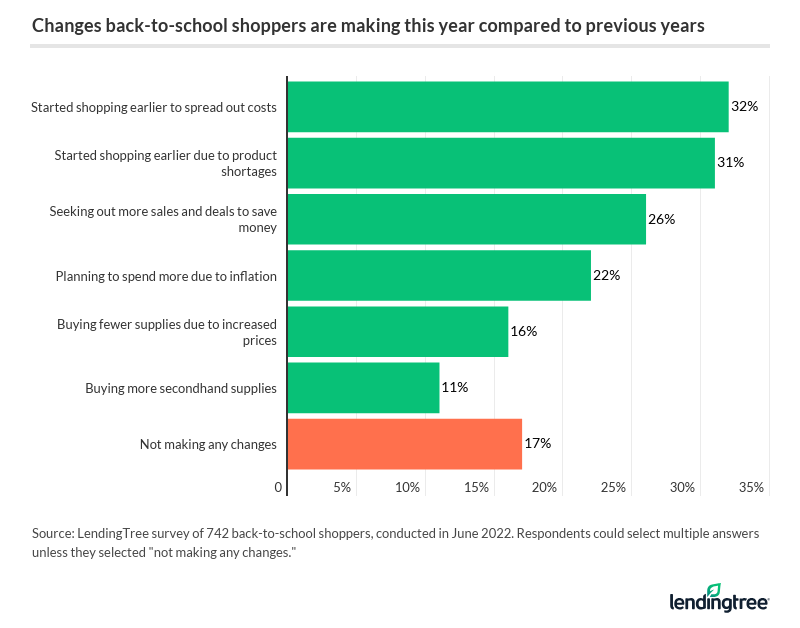 We also looked at the previous money-saving habits of these back-to-school shoppers. And a notable 47% say they “always” compare prices at multiple stores to find the best deal, while an additional 38% do so sometimes.

It seems that these money-saving strategies are paying off. Overall, respondents expect to spend, on average, $374 on back-to-school shopping. For parents with kids younger than 18, this rises to $409, though that’s still the lowest figure in the four-year history of this survey. In fact, spending hit an all-time high for parents last year, with an average cost of $498.

“That’s a good indicator that people aren’t feeling quite as good about their own financial situation this year as they have in previous years,” Schulz says.” With rising interest rates, growing inflation, falling stocks and general economic uncertainty, it is hard to blame them.”

Another potential reason for this could be that parents had large one-time purchases, like desks, computers and printers, to help their kids transition to a hybrid learning environment.

LendingTree commissioned Qualtrics to conduct an online survey of 2,082 U.S. consumers —  including 742 back-to-school shoppers —  fielded June 10-14, 2022. The survey was administered using a nonprobability-based sample, and quotas were used to ensure the sample base represented the overall population. All responses were reviewed by researchers for quality control.

75% of Parents Stressed About Paying for Back-to-School Shopping, Up 12% From Last Year

75% of parents with kids younger than 18 are at least somewhat stressed about paying for back-to-school shopping, an increase from 67% last year.