This week marks the start of the official NFL season, and now that all teams have been cleared to allow for full-capacity stadiums, fans are gearing up for a return to more social viewing events.

To find out how people are thinking about spending money this football season, LendingTree surveyed more than 2,100 people about their plans. Most said they’ll be spending some cash on football, with food and drink for at-home game watch parties being the most common expenditures. And some — particularly avid fans — say they’ll go into debt to partake in America’s favorite pastime.

Here’s what else we found:

While most people plan on spending money for football season, about a third say they won’t: 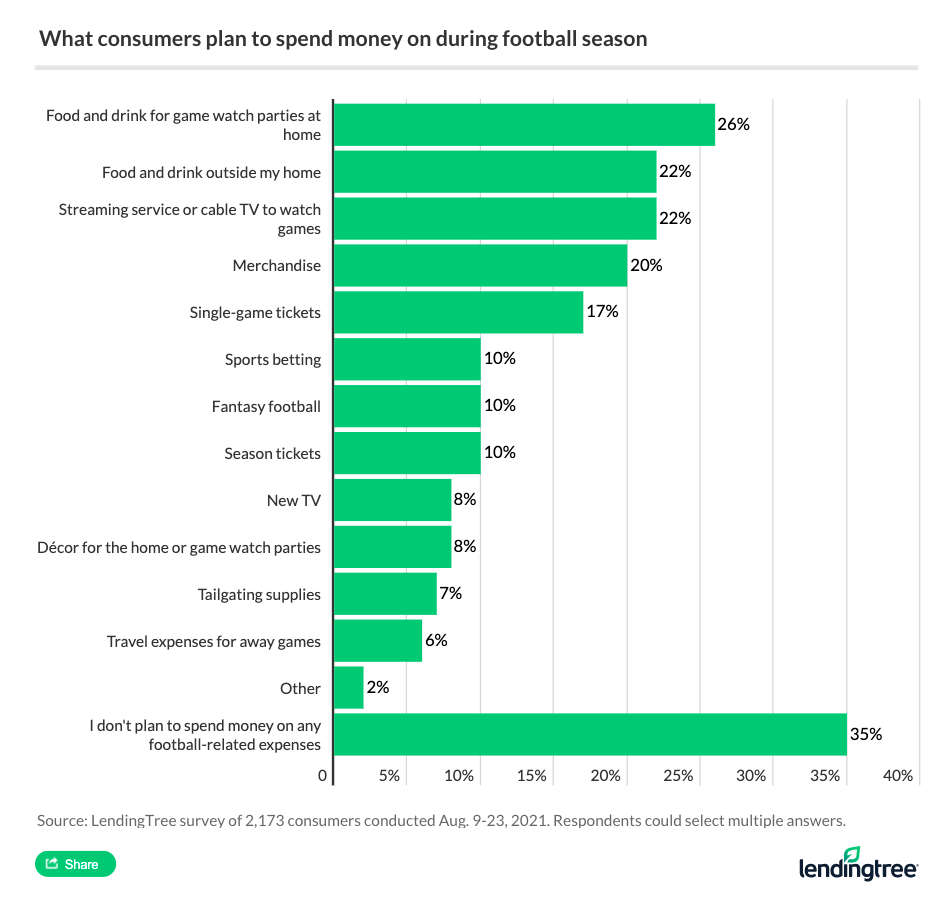 Among self-proclaimed football fans, food and drink for game watch parties at their home (41%), streaming services or cable TV (37%) and merchandise (35%) were the most-common expenditures. By contrast, just 7% said they didn’t expect to spend on football-related expenses during the season.

We also asked those who said they would spend money on at least one thing for football season about how much they planned on spending. About 22% said they will spend at least $1,000. Men (25%) were slightly more likely to fall into this category than women (19%). And Gen Zers (27%) and millennials (26%) were also more likely to spend $1,000 or more than their older counterparts.

For some, the reasoning behind spending money this football season is to help make up for 2020. 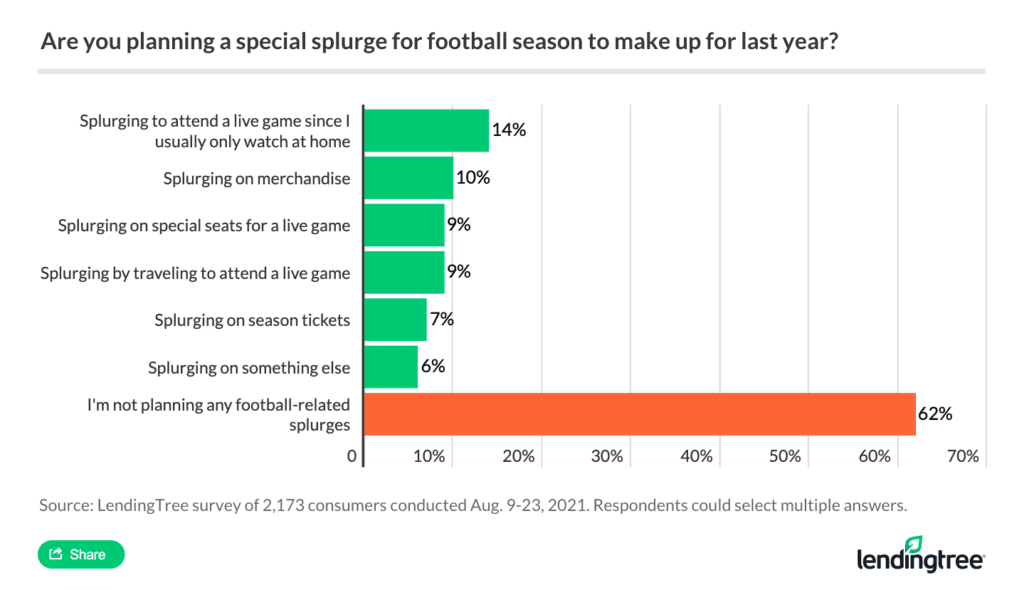 Men (17%) were more likely than women (10%) to say they planned on going to a live game this season to make up for last year. Also following the trends set above, younger generations (23% of Gen Zers and 21% of millennials) were more likely to spend on live games for this reason than older generations were (11% of Gen Xers and 6% of baby boomers).

More than half hope to attend a live game

As mentioned above, live games are a special splurge for many. From a generational perspective, Gen Zers (64%) and millennials (56%) were most likely to say they planned on going to a live game.

“People are absolutely desperate to get back to doing the things they love, and there are few things Americans love more than football,” says Matt Schulz, chief credit analyst for LendingTree. “I do think that game attendance may vary widely by region, though. For example, stadiums in the South may be packed like it is 2019, while those in other areas might be a bit more sparsely populated.”

A quarter of consumers expect to go into football-related debt

For most (84%), football-related spending has not yet led to credit card debt. However, going into debt for these expenses was more common among younger Americans as well as those who identified as “definite” football fans.

We asked how likely respondents were to go into credit card debt because of their football spending this season, and about a quarter said they were at least somewhat likely:

Football-related expenses seem to be where some Americans are willing to go into debt. Unsurprisingly, avid fans (38%) were more likely to say they were at least somewhat likely to go into credit card debt to pay for football-related charges this season than casual fans or those who didn’t identify as fans at all.

Some avid fans say their spending has caused disagreements

While most (82%) say football-related spending hasn’t caused an argument with a loved one, there are certain demographics where that’s more likely to happen. For example, 22% of men said it had, compared with 15% of women. And almost a third of avid fans said they’d had a football-related argument over money compared with just 17% of casual fans and 4% of non-fans.

5 tips for a budget-friendly football season

If you’re planning on funding your football fandom this season, it’s important to plan ahead:

LendingTree commissioned Qualtrics to conduct an online survey of 2,173 U.S. consumers from Aug. 9-23, 2021. The survey was administered using a non-probability-based sample, and quotas were used to ensure the sample base represented the overall population. All responses were reviewed by researchers for quality control.

Anastasia is the Copy Desk Chief at LendingTree, where she leads a team of staff editors and freelance editors charged with editing and fact-checking hundreds of articles per month across