Sports Fans Will Shell Out an Average of $664 This Fall, and 33% May Take On Debt

Fall is just around the corner, but fall sports have already begun. College football and the NFL are underway, with the MLB playoffs less than a month away.

To analyze fan engagement, LendingTree surveyed nearly 1,600 Americans about spending on sports — whether that’s merchandise, fantasy sports or betting. But fall sports can also mean something different for many Americans: kids enjoying youth sports activities that can lead to a hefty bill.

Keep reading for valuable insight into how much Americans plan to spend on sports this fall, as fans and as parents.

Game tickets, merchandise and tailgating: How Americans will spend money as sports fans this fall

More than 4 in 10 (41%) Americans plan to spend money as sports fans this fall, with the top purchases being:

The following graphic provides more insight into how sports fans plan to spend this fall: 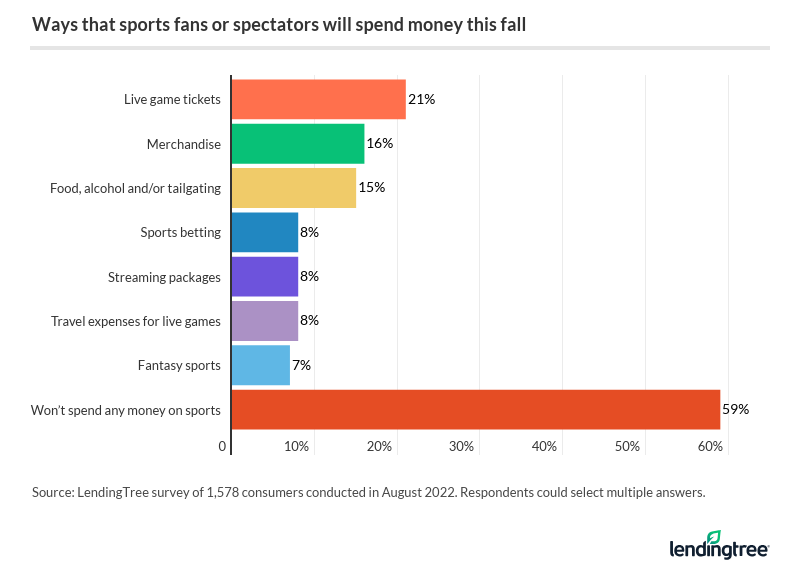 One in 4 millennials will spend money on live game tickets — the highest among the generations. Meanwhile, Gen Xers (ages 42 to 56) plan to spend money on food, alcohol and/or tailgating — either in-person or at a watch party — at the highest rate (18%).

Fans’ main spending focus will be on football (73%), with basketball (38%) and baseball (26%) falling far behind. Here’s a closer look overall: 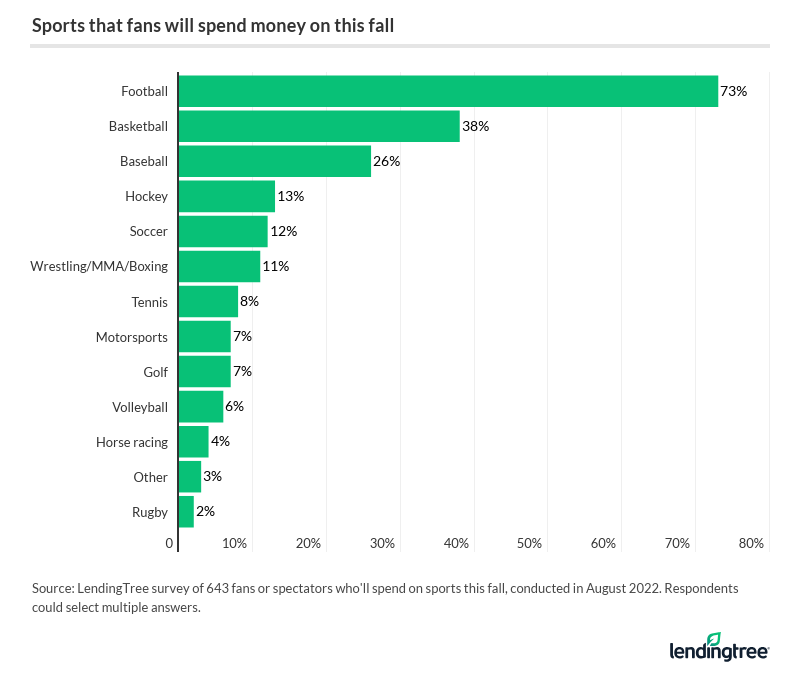 Sports fans will shell out an average of $664 this fall, led by 6-figure earners, Gen Xers and men

Fans aren’t afraid of spending on their favorite sports — on average, they plan to spend $664 this fall.

Here’s a full breakdown by income and generation:

And here’s a look at men versus women: 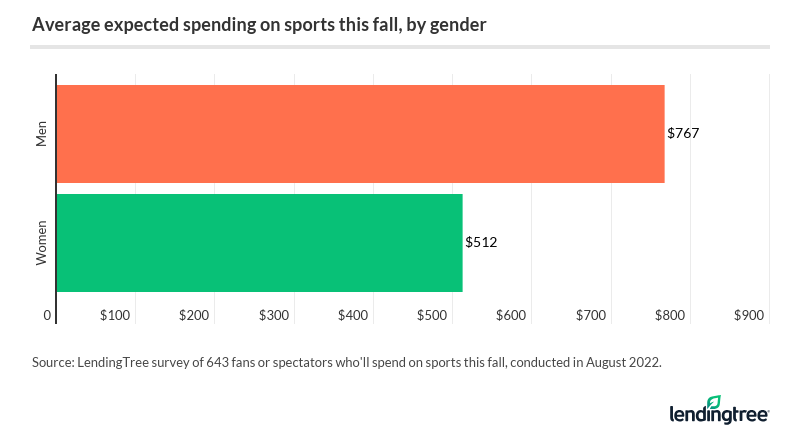 “Americans love, love, love their sports, and we aren’t afraid to spend money on it,” says Matt Schulz, LendingTree chief credit analyst. “That’s true of many different groups of people in this country, at least to some degree, but it’s certainly true of wealthier, older men.”

For many Americans, Schulz says, sports isn’t just about the game. It’s an excuse to have a great time with family and friends and bond over a shared experience.

1 in 3 sports spenders may take on debt this fall — what are the financial implications?

There are indeed trade-offs, as a third of fall sports fans suspect they may take on debt related to fall sports, with 42% of Gen Zers and millennials admitting to this.

Younger generations have more disposable income to spend on recreation activities, but many are likely to rack up some debt this fall. Schulz says this debt may not be as bad as it sounds.

“As long as it isn’t too excessive, entertainment debt can be good debt,” Schulz says. “Good debt, to the degree that such a thing exists, is debt that eventually gives you a big return.”

We generally think of returns in financial terms, like an investment. But Schulz believes that it could be positive if a little bit of debt allows you to do something that can create lifetime memories with family and friends — just be sure not to overdo it.

Here’s the full breakdown of which generations are most likely to take on debt for sports this fall: 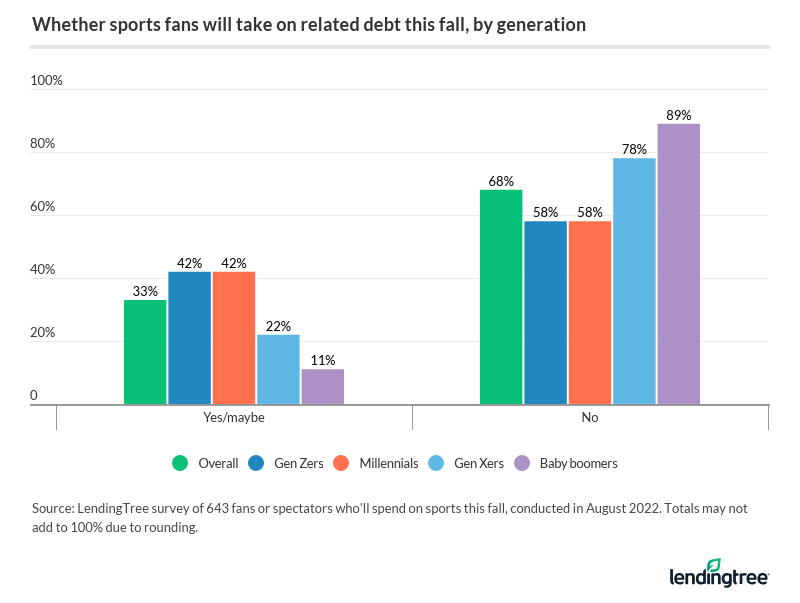 As highlighted in an earlier graphic, 8% of fans expect to bet on sports, while another 7% will spend on fantasy sports. While these figures may seem low, 33% of these sports betters and fantasy players will shell out more than $1,000 this fall — including 3% who estimate they’ll spend $3,000 or more.

“Done wisely and in moderation, sports betting can be an amazing, fun thing,” Schulz says. “Fantasy football leagues, March Madness brackets, Super Bowl pools and trips to Vegas with family and friends can be fun and lucrative — and create memories that last a lifetime. And the adrenaline rush you feel when you win a sports bet can be powerful.”

However, Schulz warns that there’s no question about the dangers of sports betting, too. It can ruin lives and — it bears repeating — has to be done in moderation.

How do people plan to pay for expenses like tickets, food, merchandise and betting? More than half (53%) of fall sports fans will use their credit card to pay for related expenses.

The best way to pay for sports entertainment, Schulz says, is to use a credit card to earn rewards, then pay that card off each month in full.

“Life is expensive in 2022, so that’s not always possible, but it should always be the goal,” Schulz says. ”Paying with a card allows you to earn rewards that can stretch your budget and even get you access to some unique experiences and discounts that might only be available to cardholders, while paying the card off in full each month allows you to get all of those things without paying any interest. That’s a pretty good deal.”

The other side of fall sports: Kids taking the spotlight

More than a third (38%) of parents with kids younger than 18 plan for at least one child to play a youth sport this fall. Expenses for this — similar to sports spending in general — can rise quickly.

With inflation increasing the cost of almost everything, nearly 6 in 10 parents (59%) say youth sports cause financial strain for their family. That breaks down to 48% who say they’ll make it work and 11% who’ll likely take on debt. 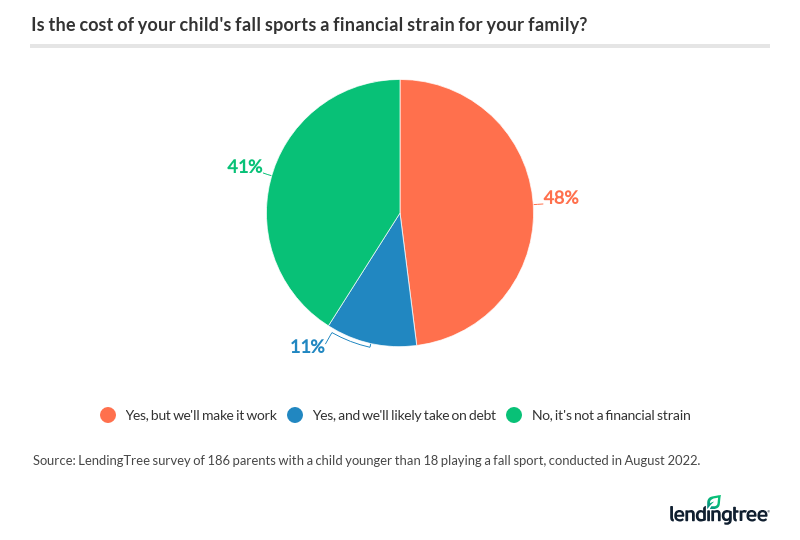 To reduce the costs associated with team sports, 34% of parents with a child on a sports team plan to participate in fundraisers. Other cost-reduction strategies include scholarships (18%), volunteering (11%) and having the child work to help chip in for costs (11%).

How to budget for youth sports

Schulz offers the following on how parents can budget for expensive youth sports costs:

LendingTree commissioned Qualtrics to conduct an online survey of 1,578 U.S. consumers ages 18 to 76 from Aug. 12-18, 2022. The survey was administered using a nonprobability-based sample, and quotas were used to ensure the sample base represented the overall population. All responses were reviewed by researchers for quality control.

Kids’ Competitive Activities Lead to Debt for 79% of Parents

Nearly 1 in 4 parents with a kid enrolled in a competitive extracurricular activity spend $4,000 or more yearly on that activity.

Debt management plans, a popular type of debt consolidation program, can help you get on track to pay off your debts. Here’s how and where to find one.