No Shave November: 48% of Americans Think Bearded Men Are Better With Money

As No Shave November and Movember charity events get underway, here’s a fun fact: Almost half of Americans think bearded men are better with money than their clean-shaven counterparts.

That’s according to a LendingTree survey of more than 2,000 Americans about grooming in honor of this month’s tradition of letting mustaches and beards grow to raise awareness of men’s health issues.

Then again, the survey also found that guys with beards spend more money on grooming products than non-bearded men – and even women. Check out our other facial hair and financial findings, along with tips on how to avoid getting into a hairy money situation. 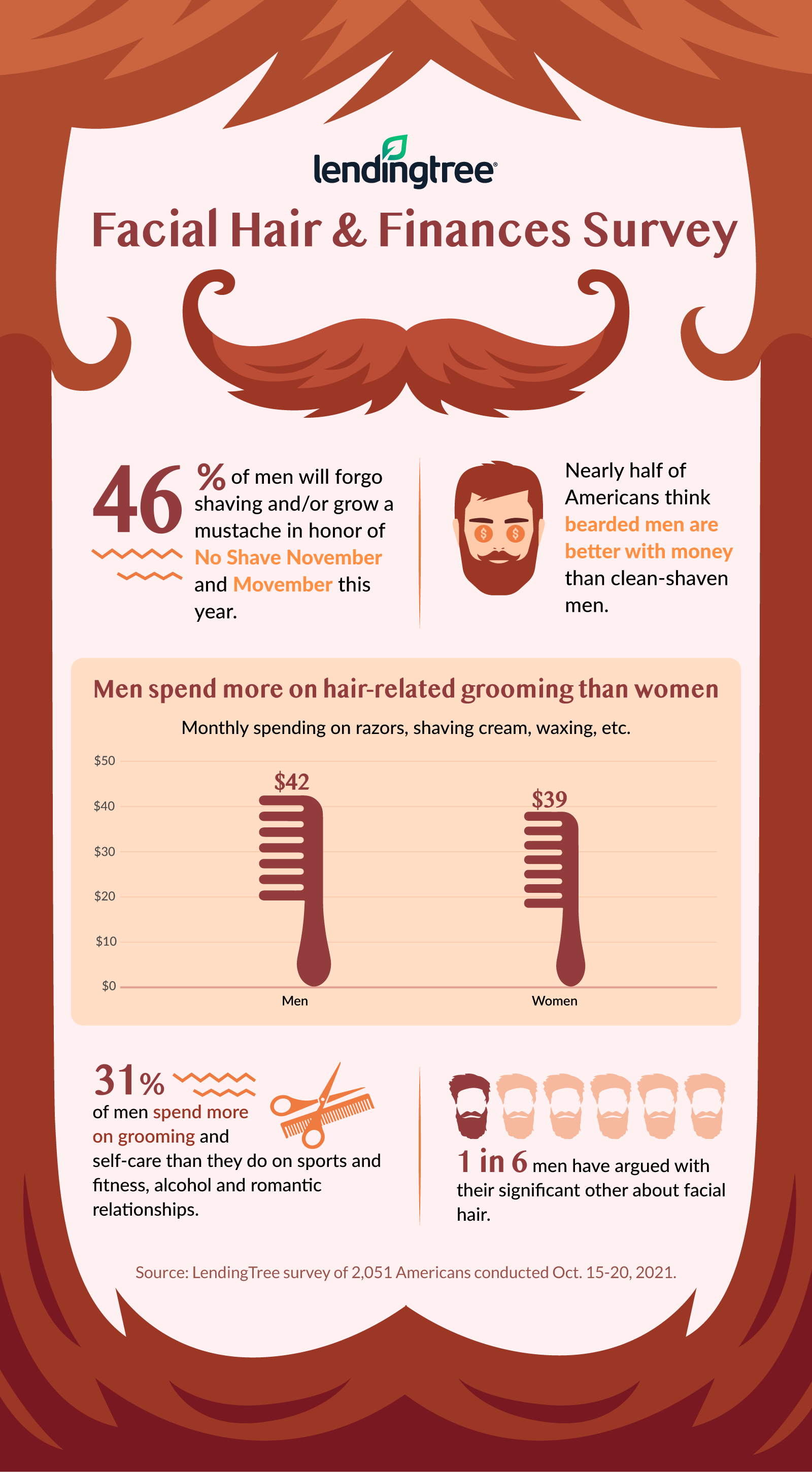 Are finances impacted by facial hair? Nearly half of Americans think so

Like many hot topics, the nation is polarized when it comes to the great beard and money debate, with an almost even split between which group of people are perceived to be better with money.

So is it a money myth to think facial hair has an impact on money savvy, or is there something to it?

“As a clean-shaven money expert, let me just say that we clean-shaven men know just as much about money as our bearded counterparts,” quips Matt Schulz, chief credit analyst at LendingTree.

Seriously though, Schulz says he’s not surprised to see many people equating facial hair with financial smarts. “For whatever reason, Americans have long seen beards as a sign of wisdom and gravitas. Even Uncle Sam has a beard.” Not to mention some of the wisest men in literature and pop culture, like Merlin, Gandalf and Obi-Wan Kenobi, have beards, he adds.

While men (47%) and women (49%) had a similar percentage breakdown for this question, perceptions did vary by generation. For instance, Gen Z and millennials were far more likely to say bearded men are better with money (59% said so for each) versus Gen X (43%) and baby boomers (34%).

What’s less surprising is that 75% of men who are actually on team facial hair think they are better with money, while only 17% of the clean-shaven crew agreed.

Movember is an annual month-long charitable event that encourages participants to grow out their mustaches or commit to running or walking 60 miles, both in an effort to raise awareness and funds for men’s health issues such as mental health and suicide prevention, prostate cancer and testicular cancer.

It started back in 2003, and has since exploded. Similarly, the No-Shave November movement launched in 2009, encourages people to ditch their razors altogether, and use the savings on grooming products to make a donation. The organization has raised over $10 million toward cancer prevention, education and research since its inception. 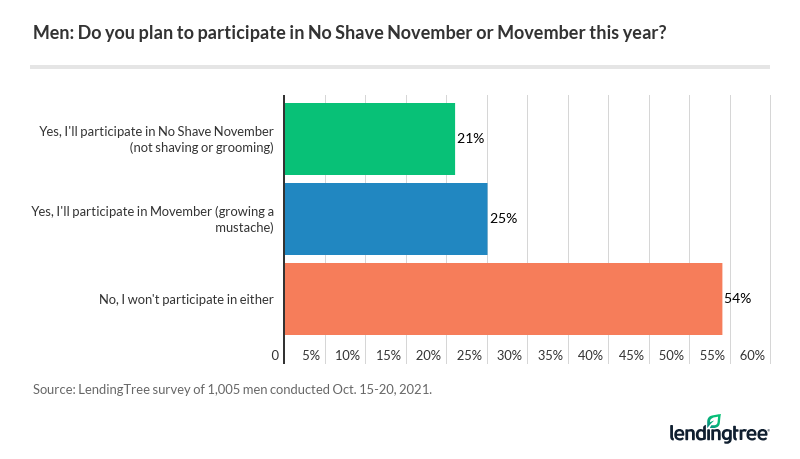 Even some women are joining the movement, with 24% saying they will be participating in No Shave November. Of course, not all spouses are on board with their partners’ hair growth for 30 days. Among No Shave November and Movember participants who are married or in a relationship, 11% say their partner is not thrilled about it.

What’s more, 16% of men (about 1 in 6) say they have argued with a significant other about their facial hair/lack of facial hair at some point in their relationship. Such grooming quarrels are more common among men who prefer facial hair than those who are clean-shaven (19% versus 14%, respectively).

Men actually spend more on shaving and grooming (i.e. razors, waxing, shaving cream and other grooming products) than women do: $42 per month for the guys compared to $39 for women. The higher spend is mostly driven by men who have beards to manage, however. That group said it spends $49 on average per month versus just $35 spent by clean-shaven guys.

“While you don’t have to shave every day with a beard, they do require plenty of maintenance to look their best, and that’s not cheap,” says Schulz. “Depending on your own personal routine, it might even be something that you’d need to budget for.”

The fact is facial grooming can get pricey when you consider the many types of products and services related to the task, but razors come in as the biggest expense. 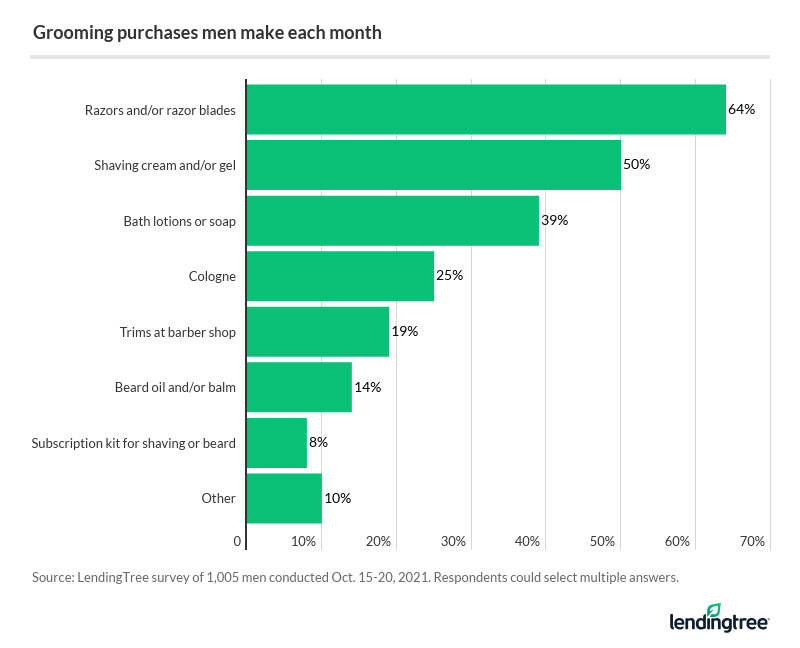 So just how big a financial priority is facial hair? Just over 3 in 10 (31%) of men said they spend more on grooming or self-care than they do on sports and fitness, alcohol and their romantic relationship. For Gen Z, that percentage climbs to 50%.

Not only are men into trimming and shaping their beards, goatees and mustaches, but they are enjoying a host of other self-care services, too. 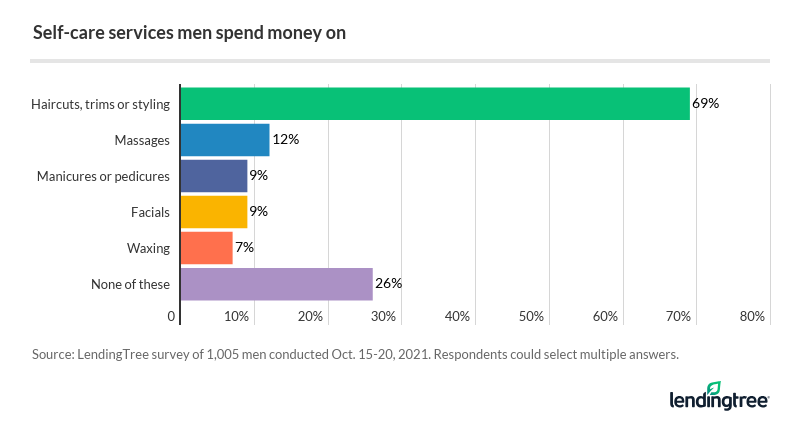 Whether you’re on team facial hair or team clean-shaven, the fact is facial hair (probably) does not make you better or worse with money than others. The good news is anyone can benefit from growing their financial knowledge with a few simple steps.

Do some budget grooming

You can’t make a meaningful plan for managing your money if you don’t know how much money is coming in and going out of your household each month, says Schulz. “Once you know that, you can make decisions about how to go forward, including shaving off some spending on things that are not a priority.”

“Few things are more expensive than having crummy credit,” says Schulz. He points out that it can cost you thousands of dollars when it comes to interest and fees over the years. What’s more, if your credit score drops suddenly, it can be a sign that you are a victim of identity theft. Schulz’s advice? “Checking your credit score at least once a month makes a lot of sense.”

Managing a large credit card balance with double-digit interest is kind of like not shaving for a month – it can easily grow out of control. One way to make headway on your balances is to open a balance transfer credit card, which Schulz calls “a godsend” for folks who carry a lot of debt. “Being able to avoid accruing interest on a balance for more than a year can dramatically decrease the cost of paying that balance off as well as the time it takes to do so,” he says. After being hard to find in the early days of the pandemic, balance transfer offers are back in a big way, so it’s a great time to shop around, he adds.

Find credit cards that grow out your budget

“A simple cashback credit card puts extra money in your pocket each month just for using it, and a new card can do even more,” says Schulz. That’s because, he explained, many cashback cards come with sign-up bonus offers of $100 or more, money that can really be useful when it comes time to pay the bills (or cover the cost of that high-end shaving kit you’ve been wanting).

Move away from razor-thin bank balances

The pandemic has clearly shown us the importance of emergency funds and how vital it is to be prepared financially. Even if you’re paying down debt, you should still be building your emergency fund simultaneously, says Schulz. Otherwise, you’re likely to just fall back into the cycle of debt when an emergency arises. “It may not be easy, and it may keep you from paying that debt off as soon as you’d like, but in the long run, it’s the right move,” says Schulz.

LendingTree commissioned Qualtrics to conduct an online survey of 2,051 U.S. consumers from Oct. 15-20, 2021. The survey was administered using a nonprobability-based sample, and quotas were used to ensure the sample base represented the overall population. All responses were reviewed by researchers for quality control.