96% of Americans Believe at Least One Money Myth. Do You?

Americans are less financially literate than they believe, according to a new LendingTree survey. Almost all Americans (96%) hold at least one false belief about money. For example, 45% believe that carrying a credit card balance helps your credit score, and more than a quarter of those 40 and younger think they don’t need to be saving for retirement.

We also asked people how they learned about money. While parents are still the largest well of financial knowledge, younger Americans are turning to social media to learn how to manage their finances. Read on for more takeaways from our January survey of 1,550 consumers.

Americans think they’re more financially literate than they really are

The vast majority of Americans (87%) rated themselves at a 3 or higher. However, 96% of Americans believe at least one financial myth that isn’t true. 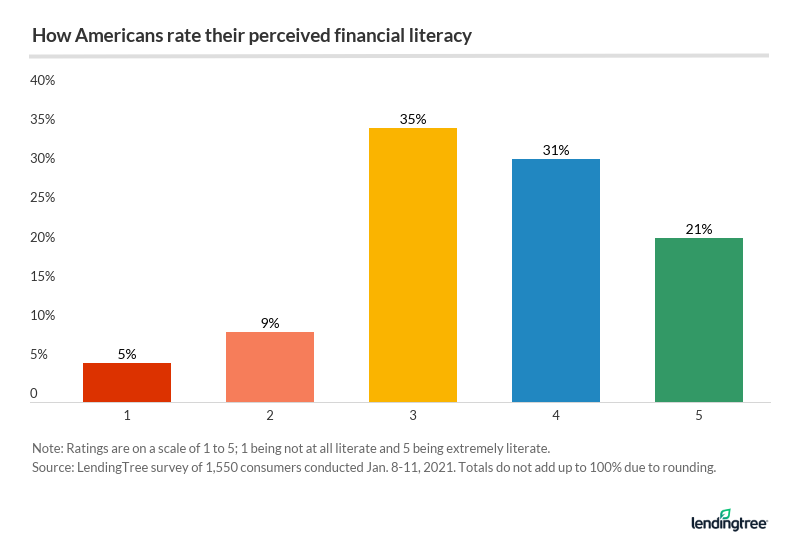 → By gender: About a quarter (27%) of men rated themselves as extremely financially literate, compared to 15% of women.

→ By income: Among six-figure earners, 2 in 5 (40%) rated themselves as extremely financially literate, which is more than twice the amount of any other income bracket. Even for those who make $75,000 to $99,999, just 20% rated themselves that highly.

Almost everyone believes at least one false money myth

There are a lot of common misconceptions about money, and these myths are pervasive even among six-figure earners and people who attained a college education. Although the majority of Americans perceive themselves to be at least somewhat financially literate, almost all of them (96%) believe at least one of the false statements below. 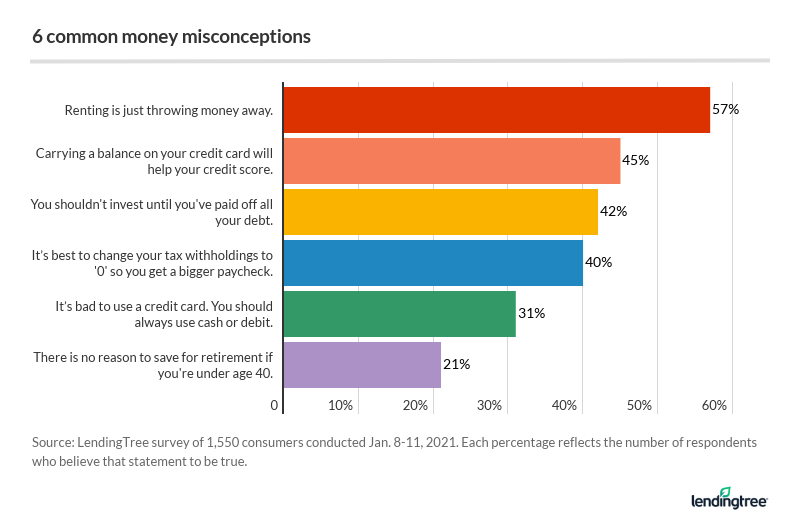 More than half of Americans ages 40 and younger believe this expensive myth: Gen Z and millennials are the most likely to believe this statement, at 51% and 52%, respectively.

Your credit score is determined by your on-time payments, your credit utilization and the average age of your credit accounts, among other things. One thing that won’t help your score: Carrying a balance from month to month.

Myth #2: It’s bad to use a credit card. You should always use cash or debit

While carrying a credit card balance from month to month can be expensive, credit cards aren’t inherently bad. As long as you pay off the statement balance, you can earn rewards like cash back on your purchases without paying any interest at all.

Myth #3: It’s best to change your tax withholdings to ‘0’ so you get a bigger paycheck

No matter how you choose to organize your withholdings, Uncle Sam is going to collect your income taxes either way. There’s no way to get out of paying taxes, and changing your tax withholdings to zero only ensures that you’re left with a massive tax bill at the end of the year.

That being said, tax withholdings aren’t foolproof, so it’s beneficial to check yours — especially if you go through a major life change like marriage or you buy a home. Many people overpay in federal income tax throughout the year, which is why they get a refund during tax season. If you’re paying too little in taxes each paycheck, you’ll end up owing money when tax season comes around.

This is a common misconception, but it may be losing popularity among the youngest generation. Only 43% of Gen Z think this statement is true, compared with 57% of Americans as a whole.

Buying a home can be a fruitful investment, depending on where you live and when you purchase the home. But depending on your circumstances and financial situation, it might actually make more sense to rent.

For example, buying a home can be a bad money move if you don’t have the funds on hand to cover expensive upkeep, like plumbing emergencies or mold remediation. And if you don’t have a good enough credit score or a sizable downpayment, then a mortgage may be a pricey burden between higher interest rates and private mortgage insurance (PMI).

Myth #5: You shouldn’t invest until you’ve paid off all your debt

While it may be true you shouldn’t make risky investments if you have, say, a lot of credit card debt, this statement is not universally true. It really depends on the type of investing you’re doing and the type of debt you have.

Low-interest, long-term debt like mortgage debt isn’t particularly burdensome on your finances, so you can feel safe investing as long as you have an emergency fund in place. And low-risk investing, like putting money into your retirement account, is something you can do even if you do have a bit of credit card debt.

Myth #6: There is no reason to save for retirement if you’re under the age of 40

More than a quarter of Americans ages 40 and younger think they don’t need to be saving for retirement: 29% of Gen Z and 26% of millennials.

The earlier you start contributing to your retirement fund, the more money you’ll have down the road. That’s because of compounding interest, and really there’s no better way to guarantee you’ll have a sufficient nest egg than starting to invest as early as possible. So, it’s alarming that about 1 in 5 Americans believes that there’s no reason to save for retirement under the age of 40, and even more troublesome that young Americans hold this belief.

Money habits are taught at home, and that may be a bad thing

Personal finance has a bad reputation for being too personal to talk about. It’s unfortunate that many people don’t like to talk about money and that it’s not required learning in a formal way as a part of American public education.

As a result, many Americans learn about money from their parents or family members instead of financial professionals. And almost as many people are self-taught when it comes to money.

Where do consumers learn about money?

Parents and other family members remain the most popular source of financial knowledge among all age groups. Nearly half of baby boomers said that they are self-taught when it comes to personal finance, far more than any other generation. See the full generational breakdown:

Just under half (45%) of Americans have learned something about money they later learned was untrue. Of those who were taught an incorrect money lesson, about 29% said that false advice came from a parent or a friend. 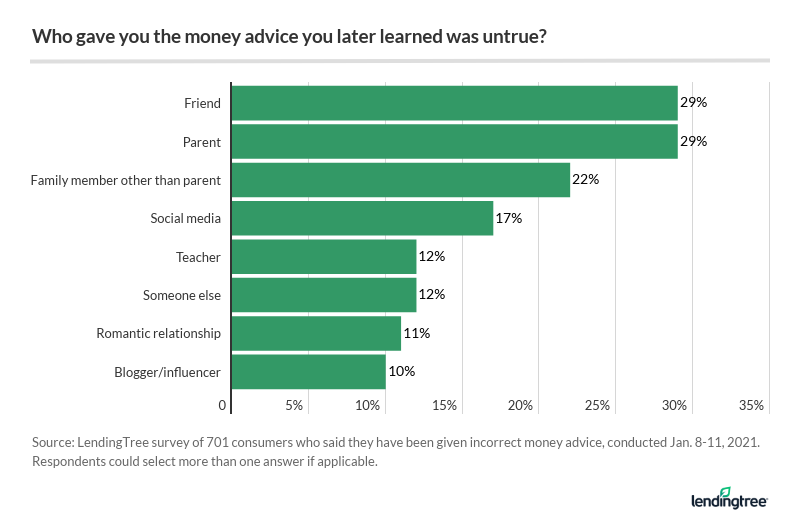 27% of Gen Z Americans learned about money on social media

About a quarter (27%) of Gen Z Americans learned about money from social media apps, such as TikTok and Twitter. That’s nearly double the overall average of 14% across all respondents. According to survey findings, 15% of Gen Z who learned an untrue money myth said that they learned it on social media. That’s pretty on par with Americans as a whole (17%).

It’s true that there’s a lot of misinformation on social media, because the sources aren’t vetted like they would be in a classroom setting. But there are plenty of personal finance experts who are also social media influencers.

For instance, Tiffany Aliche (@TheBudgetnista) and Farnoosh Torabi (@Farnoosh) use their platforms on Twitter to educate consumers on financial literacy. And TikTok, a social media app that’s favored by young Americans, has plenty of creators who focus on money matters.

Americans want to learn about money in school, but they seldom do

More than half (56%) of Americans think you should learn about money in high school, though just 29% noted they did.

There’s no federal legislation that requires financial education to be taught in school, which is concerning given the findings of our report. The truth is that you need to have an understanding of financial concepts to get by, and many new graduates are entering the world as adults without being taught about basic money concepts.

While many Americans are taught about personal finance by their parents, more than a third (35%) of Americans think they know more about money than their parents do. Those most likely to believe that include six-figure earners (54%), college graduates (47%), baby boomers (45%) and men (42%).

On the other hand, 56% of Gen Z think their parents know more than they do about money. 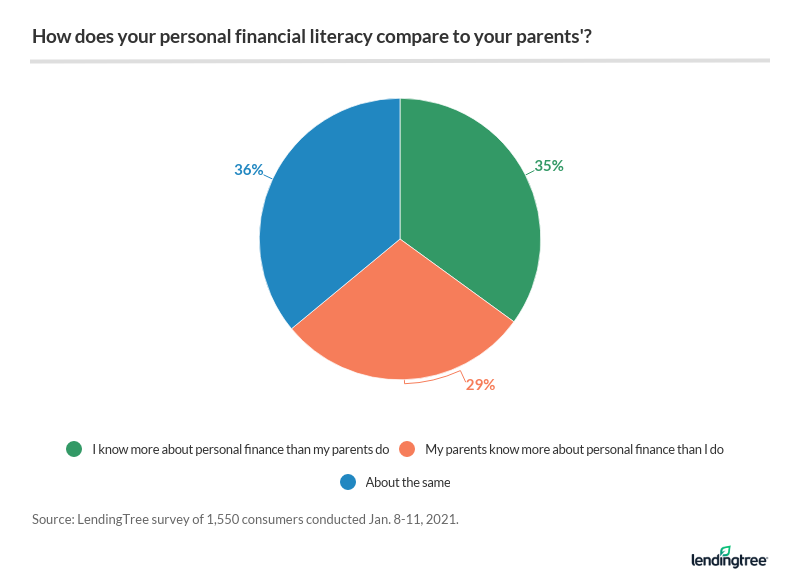 About the same amount (34%) think they know more about personal finance than their peers do. Here’s how that breaks down by demographic:

→ By gender: Men (44%) were likely to say they know more about money than their peers do.

→ By age: About 4 in 10 millennials hold this belief, more than any other age group. Meanwhile, 40% of Gen Z said their peers know more about money than they do.

→ By income: More than half (56%) of six-figure earners said they know more about money than their peers do.

→ By education: College graduates were more likely to say this (45%) than those with a high school education (23%) and those with some college but no degree (30%).

LendingTree commissioned Qualtrics to field an online survey of 1,550 Americans, conducted Jan. 8-11, 2021. The survey was administered using a non-probability-based sample, and quotas were used to ensure the sample base represented the overall population. All responses were reviewed by researchers for quality control.